Clash of Clans, also known as CoC for short, has been released for almost ten years (11 years for the iOS platform). The empire keeps growing, and many new players join the battle to snatch resources for their villages! But the clan wars are brutal to fight, and it would be a shame if you can't protect your village from an attack from other clans. In order to make faster progress and upgrade everything effectively, many players would like to play CoC on PC. 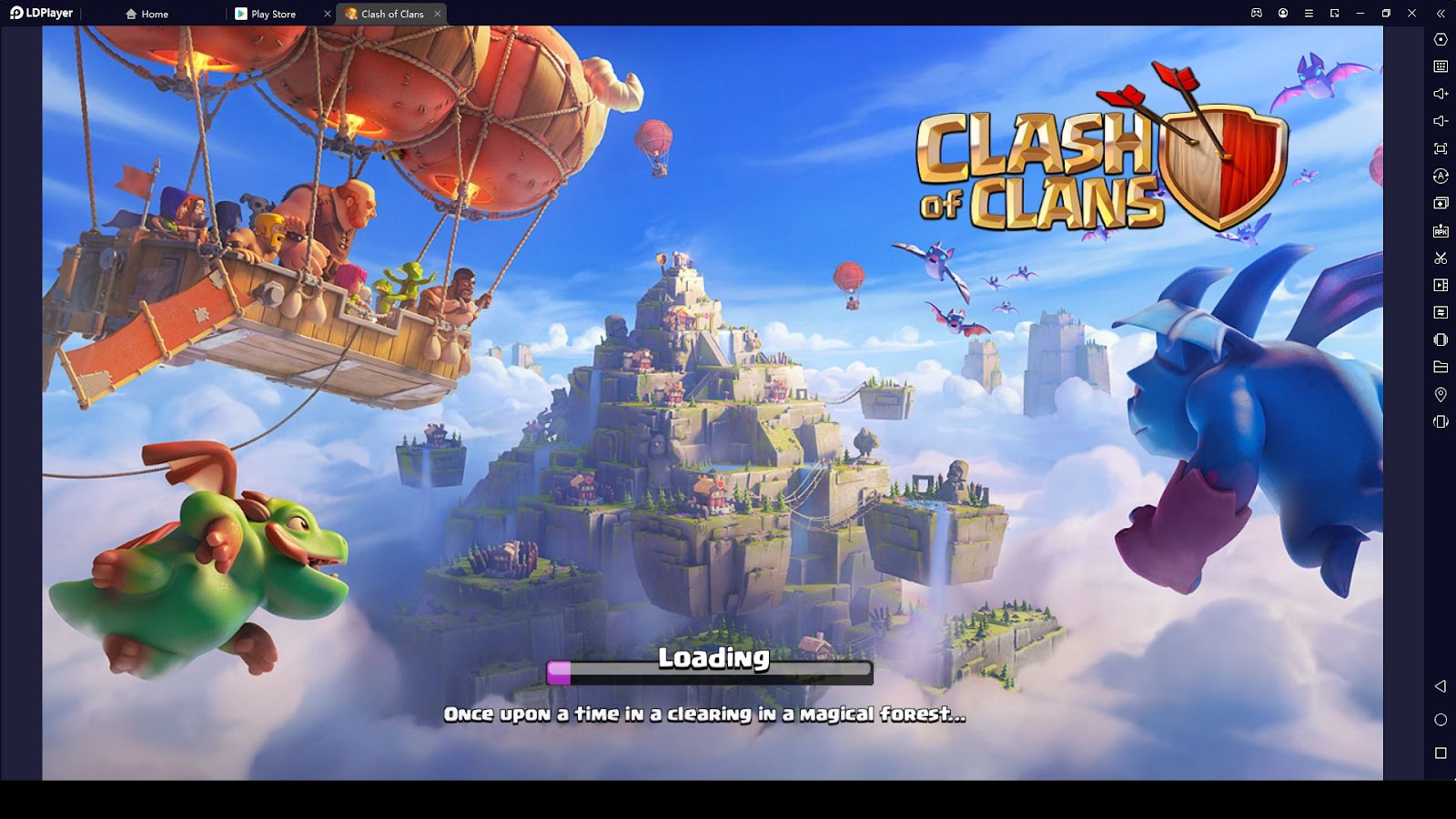 Playing Clash of Clans on your powerful computer is a smart choice, and there is an urgent need to do so! It has been noticed that many players would search something like "how to play clash of clans on pc," "clash of clans game download for pc," etc., to find the best way to run CoC on PC, and if you are one of them, you have come to the right place.

LDPlayer is the most effective and useful Android emulator you can utilize to play Clash of Clans. With its newest release of LDPlayer 9, you can enjoy fast and optimized gameplay because it has taken both of its older version's best features while empowering it with the Android 9, which the developers tweak to provide the best experience for gaming.

Why Do People Love to Play Clash of Clans?

Before we talk about anything else, let's figure out why Clash of Clans is so popular and why people love to stick to the game. You may find out that some CoC fans are like-minded. Here is an exciting answer from Quora.

"I've been a COC addict. I thought off it as a career option as I was so good at it. The patience to achieve greatness, a feeling of glory over your enemies, and most of all, the respect among your friends. They treat you as God when they get to know you're TH9 while they are TH6. The best of it is that you'll be able to build a clan and then lead the clan from the front, get to be the best of all clans." ---Nilesh Ranjan

Yes, Clash of Clans requires players to build their own villages and summon troops to protect villages from foreign invasion and attack other players. Players can also conjoin to create clans, groups of up to fifty players who can then participate in Clan Wars together, donate and receive troops, and chat with each other. CoC works like a charm, and it receives many positive reviews. The high ratings from many critics explain its widespread popularity.

How Can We Play Clash of Clans Online on PC?

Technically, Clash of Clans is a mobile strategy video game and players need to use smartphones to download＆play CoC. But, it doesn’t mean that you can’t play Clash of Clans on PC. To play CoC for PC, you need help from an Android Emulator. 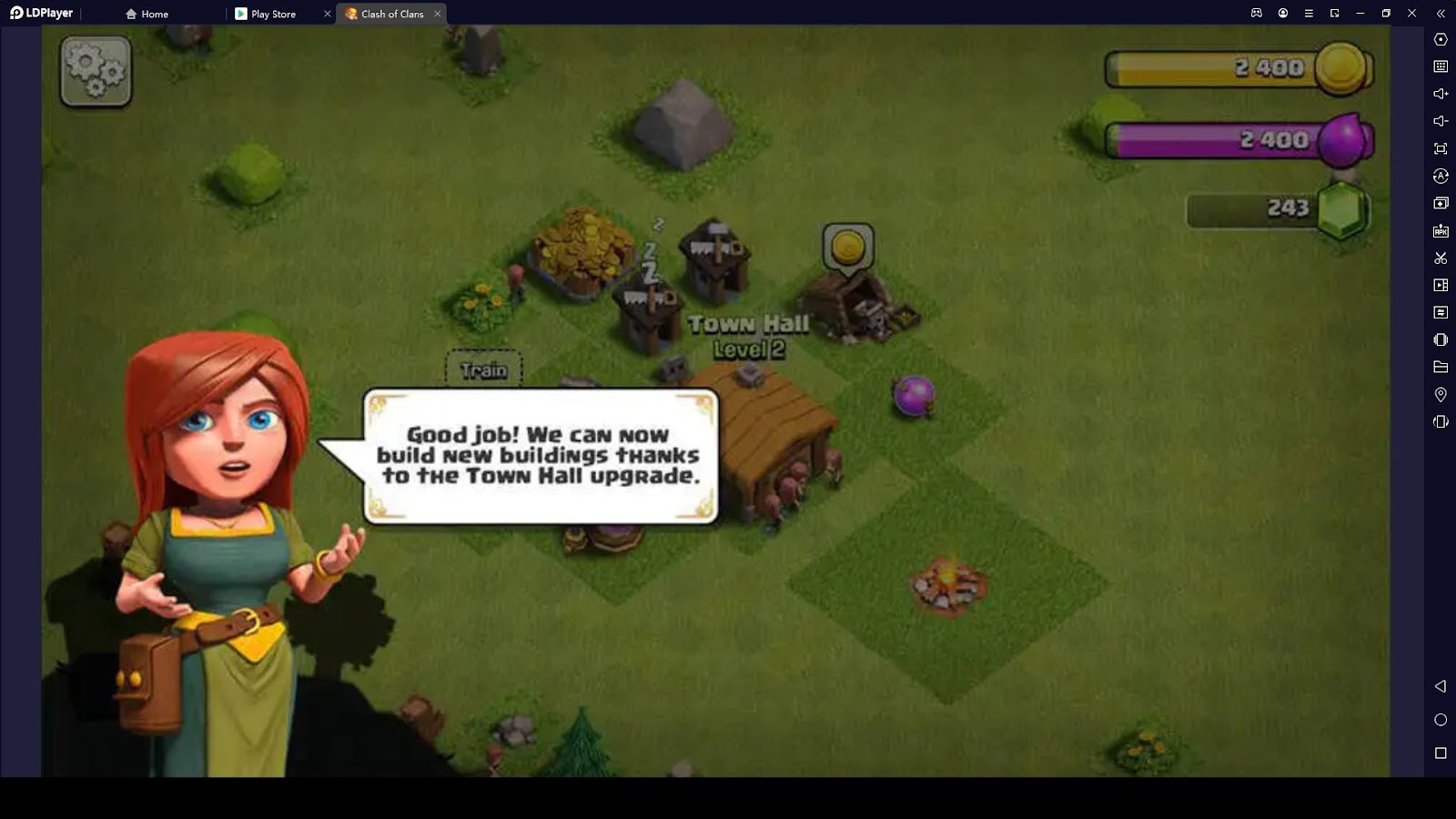 The Bridge between Mobile and Computer

LDPlayer 9 can enable you to experience mobile apps/games on your computer. This creative software provides the opportunity of running a virtual mobile on a PC. It connects two of the most powerful digital products in the world!

There are many brands of emulators available for your choice. But LDPlayer 9 is recommended as it is the fastest and most reliable emulator for playing CoC online on your computer. It supports excellent compatibility for Android games and provides smooth running performance on Windows. Moreover, your GamePlay will be improved with better graphics supported by LDPlayer 9.

Because more powerful graphic rendering technology is used in LDPlayer 9 to recover game elements, it is capable fixes graphical issues, including blurry pictures, low quality, and red spots. LDPlayer 9 also will fix the issue of certain users being unable to use high-quality game settings because of their devices.

As a free Android emulator with high quality, through comparison, LDPlayer tends to outperform other emulators; LDPlayer is worthy of your support! Please click the following button to download LDPlayer. This is the first step to greatness! 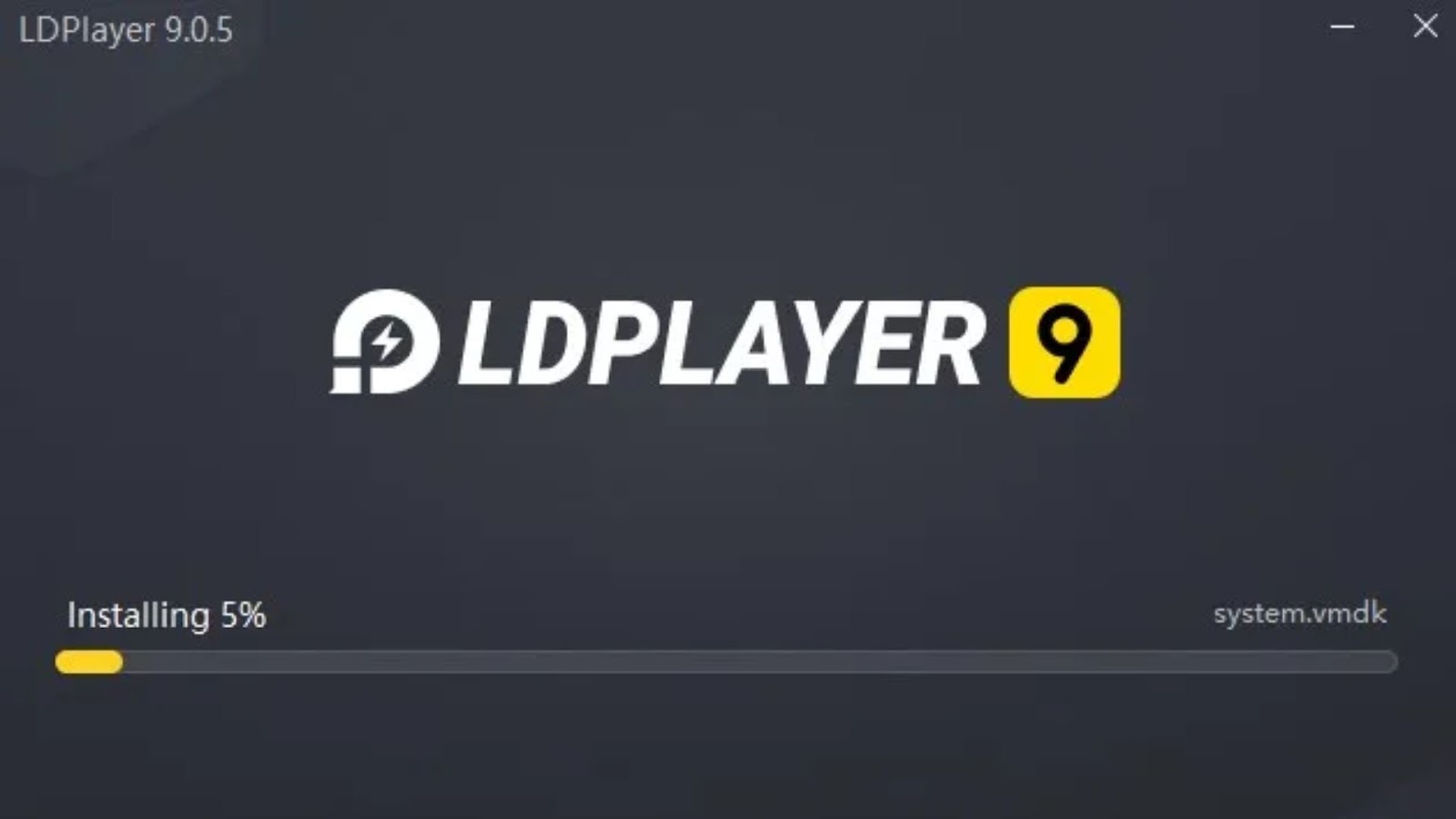 Install Clash of Clans inside LDPlayer

Once you finish setting up LDPlayer, you will need to download Clash of Clans from LD Store (or Google Play) on your fresh Android emulator. This is similar to what you normally do on your mobile phone. You will be required to log in to your Google account during the installation, and if you have a CoC village already connected to your Google account, you will have to use it now. 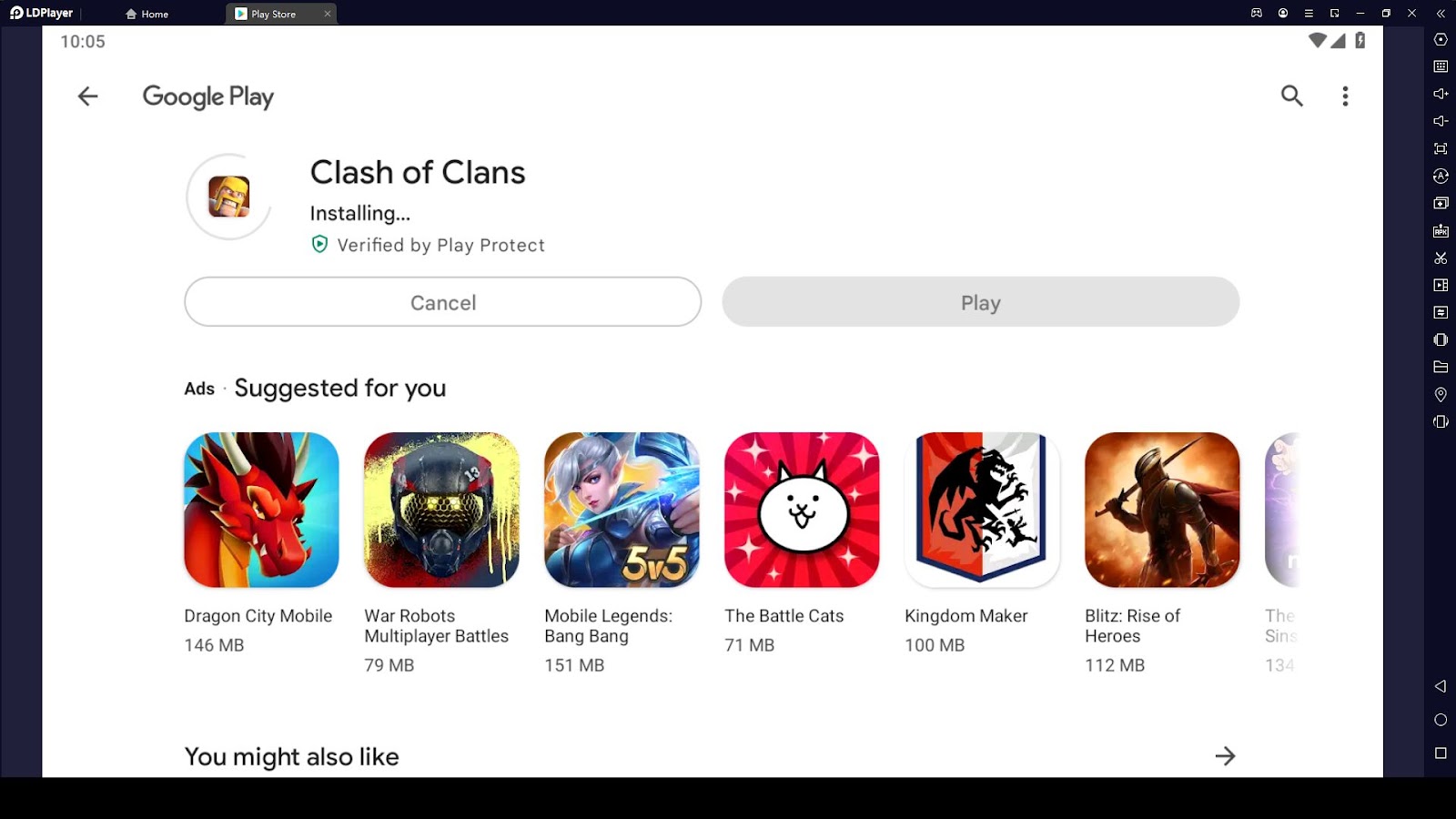 What are the Advantages of Playing CoC on PC with LDPlayer?

It has been noticed that a lot of CoC players advance their game progress fairly slowly. Some of them can’t even catch up to the average level, and this may cause them to lose the fun of the game! Part of the reason is that the limitations of using the mobile phone to play CoC will slow down your game progress. But things are going to be different now with LDPlayer!

Your phone is old and can’t run CoC smoothly

Your phone is in low battery condition

Play CoC with such a small touch screen

Make use of your computer

The computer is more powerful than a phone

Won’t happen on your computer

Playing Clash of Clans online with LDPlayer can bring you more benefits than you might think. One CoC fan uploaded a “great helper” on LD Store called “XiaoxiCocScript,” which can enable you to play CoC automatically. Read this tutorial: How to Play Clash of Clans Automatically.

More Help from an Intermediate's Guide to Grow Faster

1. Keep as many builders as possible busy all the time.

2. Keep your laboratory busy most of the time.

3. Be smart about what you build and when you build it.

4. Raid efficiently so that you can “fund” your activities.

5. Follow some simple rules and copy others when laying out your town.

6. Fight wars, trophy push, smash people with hogs, etc. to have fun, but don’t forget #4 since it is what will “pay the bills.”

Read More from Here: An Intermediate's Guide to Growing Fast in Clash of Clans 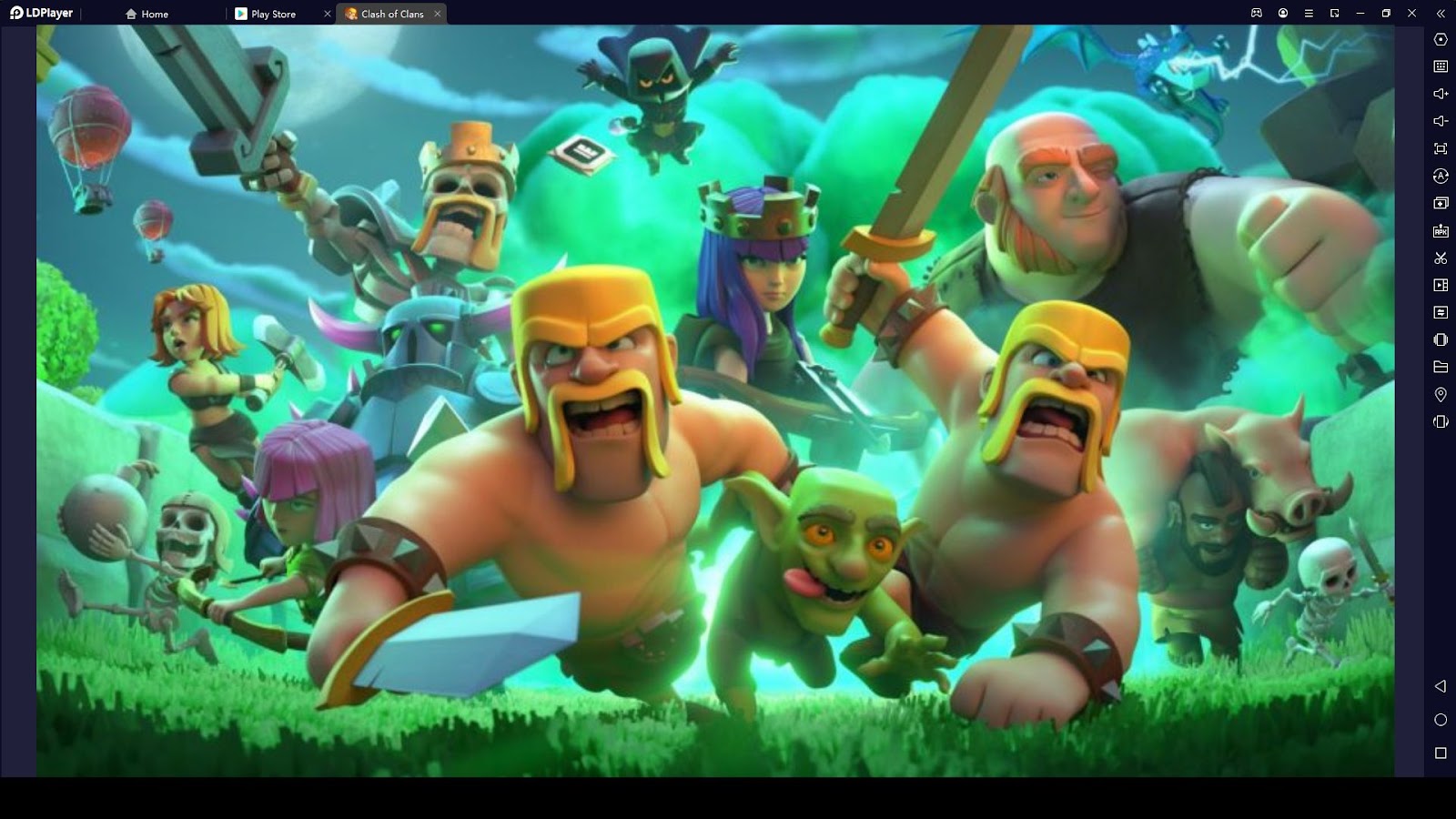 This is for new (and old) players to understand some abbreviations from Clash of Clans. We hope this will help you get along well with your clan and the community!

TIA = thank you in advance

BRBR = be right back raiding

premature TH= a person who upgraded their TH before upgrading the rest of his building sufficiently and so has trouble playing the game.

Clash of Clans has constantly been improving to offer more fun experiences for Supercell gamers. Just enjoy this classic game, and there are more content and updates waiting for us to explore. Hope everyone can have fun playing Clash of Clans on PC.