Do You Really Know LDPlayer?
LDPlayer is purely an Android emulator allowing you to play Android games, or access Android apps on PC. With the help of Virtualization Technology, LDPlayer enables you to experience Android OS (which is limited to Android devices like phone and tablet in most people's opinions) on your Windows computer. Now, you can bring your mobile gaming on a bigger screen, saving your phone battery life and granting you unlimited numbers of virtual phone without any cost. Everything is the same between LDPlayer and your actual Android device.
Is It Legal and Safe to Use LDPlayer?
Yes, LDPlayer is legal and safe to use on your PC. Android is an open source operating system, and anyone can modify and distribute the software using the source code. Also, any account login is between you and the service providers from the app itself. LDPlayer is merely just an Android emulator that do not contain any malware, suspicious activity, and trojan miner.
Refer to this article for more answers regarding the safety.
Don't Miss the Optimization Opportunities
Enable Virtualization Technology
Inter CPU offers Intel® Virtualization Technology (Intel® VT) while AMD CPU has AMD virtualization (AMD-V). The CPU virtualization features enable software like LDPlayer to run without any performance or compatibility issue, as if it was running natively on a dedicated CPU. Enableing VT won't damage your computer, instead, it powers up LDPlayer 10x faster. 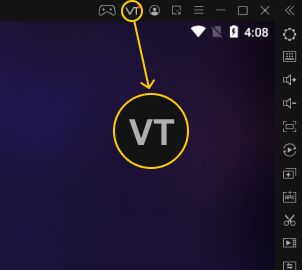 Update Graphics Driver
To avoid potential problems caused by the outdated graphics driver, you should alwasy update the driver to the latest one.

Remember Windows Position & Size
Set up the feature to remember the position and size of your emulator instances. Save you the trouble of resetting the windows from restarting the emulator.

Allocate CPU and RAM Resources
More isn't always better. You should flexibly adjust the allocation of CPU and RAM resources to fit the game/app you operate on LDPlayer.

Personal Account Login
Any game linked to your personal accounts will be synchronized on LDPlayer when you log in with the same account. However, do remember that your guest account is only stored in the exact emulator instance you play. Bind your guest account soon in case you loss the game process after uninstalling the game or LDPlayer.
LDPlayer 9

The Most Powerful LDPlayer Version Ever!
Best Compatibility & Stability

Supports 99% Android games and apps without lag and crash

Using Android 5.0 system, LDPlayer 3 (32 Bit) is well-developed and stable for running 32 bit games and apps with the lowest CPU&RAM consumption.