MIR4 is a new MMORPG game from developers Wemade that takes heavy inspiration from the original Legend of MIR MMORPG, released in 2004 on Windows PC. Legend of MIR was hugely popular in parts of Asia, especially in South Korea and China. The MIR4 MMORPG's gameplay is very similar to the original, with major graphic differences considering how MIR4 is powered by Unreal Engine.

There's a lot to admire in MIR4 as it offers tons of content in a unique and fascinating open world. Thanks to Unreal Engine, the game offers gorgeous graphics, and the classes of characters to pick from are eye-catching.

Like literally every game there is, MIR4 has both negative and positive aspects. So in this article, we'll be reviewing MIR4 and detailing both its positives and negatives. So without further ado, let's get into the review.

The game lets you choose one out of four classes of playable characters before you start the game. But if you want to play with more than one, you can actually do that with a single account which is a good addition to the game.

After choosing your preferred character, you'll have to customize them to your preference. This is another aspect where MIR4 excels because there's so much to customize, which gives players various options on how they'll like their character to appear. After playing MIR4 for a couple of hours, you'll notice that there are actually dozens of things you can do in the game.

And you won't be doing it alone because there'll be thousands of other players in the game with you. The game's exciting PvP also allows you to fight with other players and get rewarded with resources. The game's graphics look really good, and even if you don't compliment every other feature in MIR4, you'll definitely have something nice to say about the graphics. 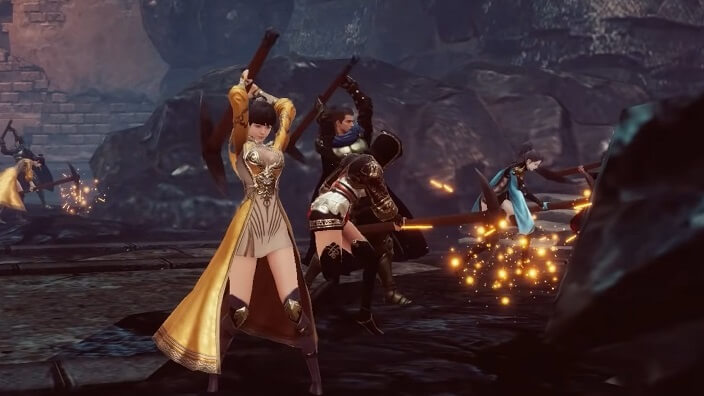 Auto-combat is an excellent inclusion

This shouldn't really come as a surprise for players who are big fans of MMORPG titles because most MMORPG comes with an auto-combat feature. In MIR4, you can choose to use it in several situations, either in battle or farming.

Using the Auto-Combat feature in battle means you allow the computer to control your character against enemies. And in farming, it's not really auto-combat but Auto-play since you're not exactly fighting enemies but cultivating crops while you spend your time on something else.

The feature is relevant because you might be in the middle of a fight or quest that you simply cannot afford to fail or pause. That's where the auto-fight feature becomes your best friend. Other than simply fighting enemies, the auto-attack feature in MIR4 lets you automatically go on missions by choosing the mission you would like to complete and just selecting auto mission.

The game also has the auto-mining feature, which allows your character to mine for resources automatically by just roaming around on their own without you controlling them.

MIR4 offers a Play-to-Win feature to players, which allows just about anyone to play the game win cryptocurrencies. Before a player can reach this level, they must have played the game up to level 40. Afterward, they can smelt their Darksteel token to Draco and connect their Wemix address to the game.

Doing this allows you to withdraw or deposit Draco and trade your tokens for Wemix tokens which you can then trade for Korean Won in Bithumb, where you can now convert it to bitcoin, Ethereum, litecoin, and pretty much any other cryptocurrency that's available in the game.

Wemade also announced a Mint, Trade & Play feature that will allow players to sell their actual in-game characters for real money. The characters will soon become NFTs, which will enable you to sell and trade them for real money. So if you've actually been spending less time on this game, perhaps you want to amp up your effort a little bit in order to have powerful characters that other players would want to pay good money to buy.

The Blockchain integration is still very new, and we can only hope it can be improved in future updates, such as adding more items and equipment with NFT support. However, this is a feature we haven't tried for other languages, but we are certain that this feature translates other messages that aren't English to English. It's a unique feature because compared to other MMORPG titles that lack the feature, MIR4 lets you chat with players that type messages in Chinese, Arabic, French, etc.

MIR4 has typical MMORPG controls that place the virtual joystick movement button on the lower-left corner of the screen while the attack and special skills buttons are on the right alongside buttons that you can use to equip consumables such as portions other things.

The controls are average, and there's really nothing negative to say about them plus, the game comes with an interesting Auto-play feature that's very commendable.

As for the music and Soundtrack, they're pretty average too. The sound effects are interesting during the battle and encourage you to keep hacking and slashing at enemies on end. The characters' interactions in story missions are cool to watch as well. MIR4 has certain limitations that don't allow players to access some items until they have reached a particular level. While this is something typical for games of its genre, the level at which MIR4 has set to lift limitations off players is quite high.

Like the feature to convert Draco to BTC, it is only allowed for players from level 40 above, and it's not just that. Some in-game features that aren't BTC-related are also limited to players at a high level. So while some players may not have a problem with this, it can actually deter new players who wish to start enjoying the game the right way.

While it is possible to play MIR4 without buying a single item from the store with real money, it is a pay-to-win game. Players ready to spend money on items and equipment that give their character an edge over other players will always have the upper hand in PvP battles.

MIR4 has a lot to offer to mobile players, and despite being available for a couple of months, the game has seen an impressive number of downloads so far. Players who have played the original Legend of MIR will notice a big difference with MIR4 and how it doesn't quit compared to its predecessor.

Ultimately, MIR4, like most MMORPG titles, has dozens, if not hundreds of things to do and missions that players can embark on. And with its impressive Auto-play feature, you don't necessarily have to be staring at your screen all day actually to play the game.