MIR 4 is a triple-A MMORPG that brings with it five different classes to choose from. Selecting the right class for you is very crucial as your entire game depends on it. We know the excitement of getting into that game as soon as you get the game. But taking your time out to know about these characters and what they have to offer is crucial for any player that is willing to invest some time in this game. Below is everything you need to know when creating your character.

Choosing a Character that Matches Your Playstyle:

In any MMORPG, knowing what playstyle a player prefers has a big role in selecting a Class. Each class is unique in abilities, movements and physical appearance. Some of these characters may offer players more damage in exchange for being squishy, while some of them or some might be sturdy but less damaged. So before choosing a character to go with, knowing each character is a must.

MIR 4 provides players to choose from five different classes. Each of these classes is good in its own ways, and they all have a very high skill ceiling, some higher than others. The knowledge that you get from learning about these classes is very important as it will greatly help players while in combat with those classes. Below is a list of all the classes in MIR4 while also briefly describing them. 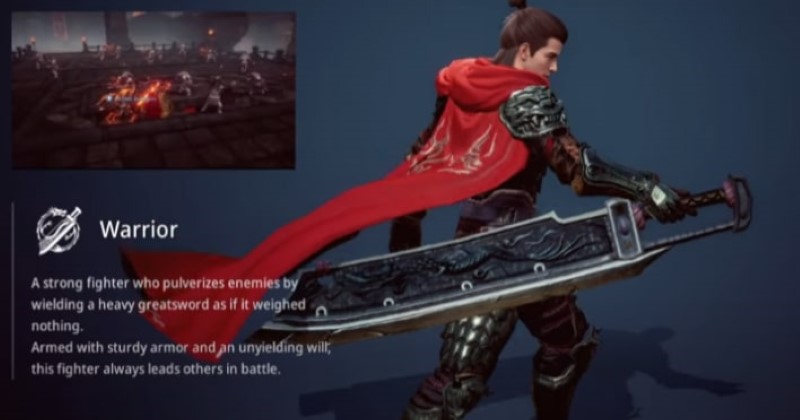 The life of a tank in an MMORPG is never easy, but at least it has an upright to it. All a player needs to do is to charge in the battle and then from there figure out what to do. The high DEF stat this class has makes it very sturdy, which helps the player to take engagements head-on. The warrior class is very lenient when it comes to taking a hit or two, which makes it a good choice for new players.

However, the class is not mobile at all. The movement in this class is very sloppy and easily punishable. To utilize this class to its full potential, a player will need to master the movement mechanics and increase the agility stat in the game. Warrior class specializes in dealing high DPS in an Area Of Effector on a single target. Warrior is one of the highest damage dishing classes in the game.

Lancer is one of the strongest classes in the game, if not the strongest. The sheer amount of threat this class has when facing another player in PVP it's not compatible. Lancer has the highest DPS in-game and has the range to compliment it. Lancer is a good choice for players who have some kind of experience in playing MMORPG but still lack some experience.

The crit’s on this class and the high DPS make it a must-have in every party during a raid. Apart from the Lancers high DPS, its supporting abilities make it an amazing team player. So, if you are someone who is looking for a class that will have a huge presence in the game, this class is for you. Just remember this class has a high learning curve, so it can take some time to get better at the game. 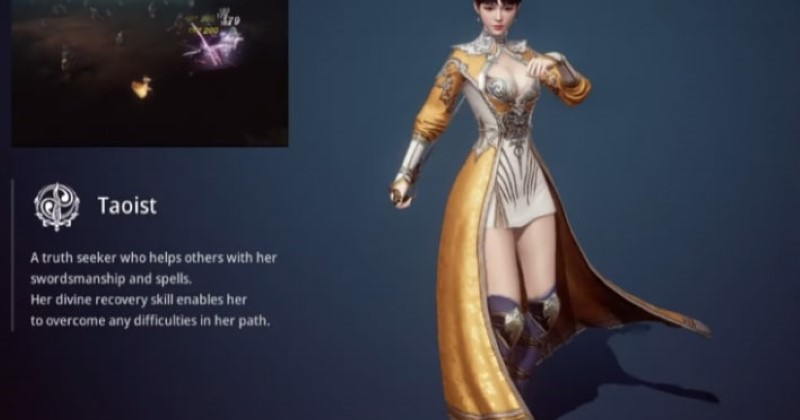 Taoist are martial artists, so it's given that their entire kit revolves around close combat. Suppose you are someone who prefers having a little distance between your enemies and you, then this class isn’t for you. But if you are someone who loves getting close and personal with the enemy, you and this class are a match made in heaven. Taoist are, however, very hard to learn but once mastered. You will be able to increase your ranking way easier.

To be a good Taoist, the best thing for a player to do is to learn how to gap close. Gap closing is very important as everything in your kit will be for close proximity, and once you are able to get your hand on the enemy, you are almost guaranteed to win. After gap closing, knowing each skill that a player can choose from and knowing the combination of these skills is a must. This will allow the player to chain cc the enemies by keeping them in a long-running combo.

Sorcerer is the class in the game, which entirely depends on the character's skill. The sorcerer's class is one of the harder classes for the master as they are very easily punishable. However, the damage this class dishes can be extremely lethal. Apart from the damage, the supporting ability of this class can change the game around.

Sorcerer class requires players who are extremely patient when it comes to fighting. Players need to learn to look for opportunities and have to learn about different types of skills that go in sync with each other. Sorcerer basic attacks are completely useless, so it's always in the best interest of the players that they keep an eye on the mana supply. Because as soon as the man resources go down, the player starts finding themselves in a sticky situation.

The Archer Class is the class that is in almost every MMORPG ever, and that is for a good reason. The simplicity that class provides makes it a very satisfying option to pick and start your journey. The run and shoot gameplay haven’t really changed in MIR 4; but however, the way this game portrays this class makes it seem exciting. The Archer Class is entirely dependent on movement control, and if a player can master it, it is very hard to win against him.

Archer is one of the average classes in MIR4, especially in the PvP mode. Archers' serious damage and high agility make it so that every player will try not to keep a long distance from them. However, what really is the downfall of this class is how little defense stat this class has and how easy it is to get rid of it at a party. If you are someone who is willing to take the risk for the reward, then go for the class as you won't regret it. 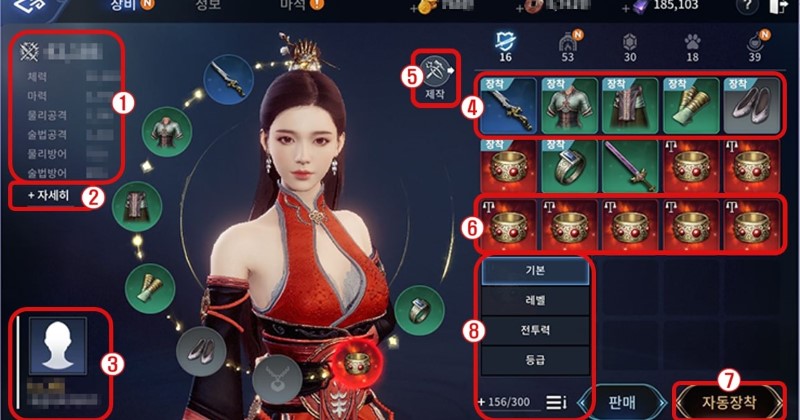 On the character screen, you can use and manage all the items you own, and you can check the current character's growth and activity status. You can also equip Mana Stones to help your character grow.

Players can set the sort order of items among Basic, Level, Combat Power, and Grade and they can sell or use items stored in the bag by touching them. Players can touch the item to check the acquisition path and trade availability in the item information window. For items that can be traded, players can check the items for sale by touching the Exchange button.

Here players can automatically select items that match the filter they have set by touching the Sell button. When selling multiple items, they can select up to 20 items at a time. If they do not have enough space in their bag, they can use gold coins to expand it.

Players can go to the info window by touching the top info tab in character - equipment window. Here they can check the character's combat power and can also access detailed figures through the +Details button.

Naming System can be divided into three categories:

Non-Display Status are buffs that can be seen on your character by other players, but it's still there. If you are awarded such a title, you can't show it to other people.

Players can display their desired title for seven days by using the badge. When the title is changed, the title in use disappears, and the period of use of the title is reset to 7 days. 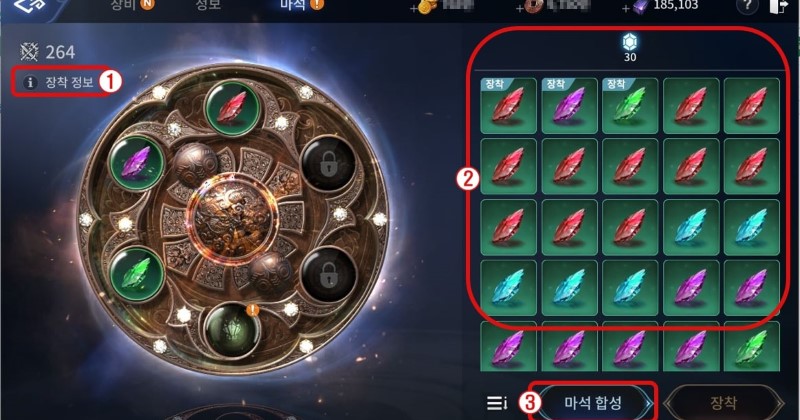 Touch the purchased Equipment to dye, wear, or remove the costume equipment. Now touch the color selection button to apply the desired dye to the clothing equipment and purchase it. On the left side of the screen, players can check the Equipment they are wearing and make it visible or invisible.

Players can move to the boarding window by touching the Character-Boarding tab in the menu or by touching the top left boarding tab in the costume window. Here they can check the information on the stats applied to the mount at the top left of the screen. From there, they can check stats that can be acquired when purchasing the amount. They can purchase a vehicle or set or cancel boarding. When boarding is set, the vehicle will be moved using the vehicle set in the field.

No matter what MMORPG you are playing, knowing about each character in-game is important. This guide completely outlines all the playstyle that these characters have to offer while also helping players to deal with character creation in this game. If you are a new player to MIR 4, following this guide is a must as it will help you plan your future in-game. MIR 4 has both PVP and PVE, so before picking up a character, keep both of these game modes in mind. MIR 4 Mastering the Art of War