Arcana Tactics, made by Gamevil, is a unique mixture of traditional strategy and RPG games. The game perfectly blends itself with genres like Gacha and Auto-Battler, making it a game that has much to offer. The game's challenging battling system makes it so that the game is very hard to get at first. But you don't need to worry about that as we have a beginner guide to help you get started with the game. Arcana Tactics is a game that has very much to offer if you just invest yourself a little bit into it.

Arcana Tactics is a game that is a fusion of many different game genres, which can sometimes make it hard to understand. But you don't need to worry. We have gone through the game and got you five starter tips that will set you on the road to success. These tips will help you early in the game and have a tremendous effect on your late gameplay potential. So below are the five tips that will make your gameplay experience better by many times.

Using Birth Dates For Your Advantage: When you reach a certain point in the game after completing the tutorial, you will be able to unlock the arcana card system. When you unlock the arcana card system, it's going to prompt you and ask you for your specific birthday. If you are someone who just completed the tutorial, this is the perfect opportunity for you to manipulate this game in your favor. By using some specific dates, you will be able to get different cards. Below is a list of all the cards with their descriptions that you can attain by using these specific birth dates:

(All playing cards above are at max stat)

(All cards above are at max stat)

Some of these birth dates may seem very ludicrous, but if you really want to get your hands on these cards, these birthdates will do the job. But remember, you can only get one specific card from this, so be careful while choosing cause you might not get a chance to see these cards in a while. But in the event that you missed this opportunity, don't worry, as you will be able to summon these cards later on in the game. Arcana Tactics is a game in which the entire game's combat system is driven by combining different heroes to make greater heroes. So in order to create those combinations, you need to have those three stars, four stars, or even five stars unlocked. If not, even if you have a part of it unlocked or have only one version of those specific combinations, the card will be pointless. You can't build the heroes that you want without completing these prerequisites but don't worry; this is where the game's Gacha system comes in handy.

So if you are someone who just came into the game and wants to get your hands on some new characters, the best way for you is by spending your gems in those eight-time pulls that cost 600 gems each. These eight-time pulls may seem a waste of gems at first, but that's not the case. These eight times pull will allow you to get your hands on a variety of cards with different rarities, which will allow you to get even better cards. These eight times summons will improve your overall gameplay experience by putting you on the road to success from day one.

Don't Upgrade 1 or 2 Characters with Resources: Instead of wasting your resources on lower-level characters, save it for those four or 5-star characters as they will give you the most for your money. If you want to increase the level of a one or 2-star character that you really like, you can just utilize him in your team and grind him up to a certain level. After reaching a certain level spending your resources on it will be a better choice. These hero combinations have all the different levels of heroes present in the game. If you want to build some specific hero, you can just click on the hero, and the index will tell you all the prerequisites. So take your time out and understand how these combinations work so you can make your desired hero. If you are someone who doesn't know what character he wants, the index will help you here as well.

Instead of clicking on a specific hero, you can just choose the class, and the index will take out all the specific class-related heroes. This will save you so much time in the game as you won't even need to research. Just remember that in Arcana Tactics, you can't pause the game, so don't ever open the index while you are in the game. This will cause you to lose a lot of time as the index is very hard to navigate without prior knowledge, and it will decrease your chances of getting a three-star on a mission.

Get As Many Stars As You Can While Completing Stages: 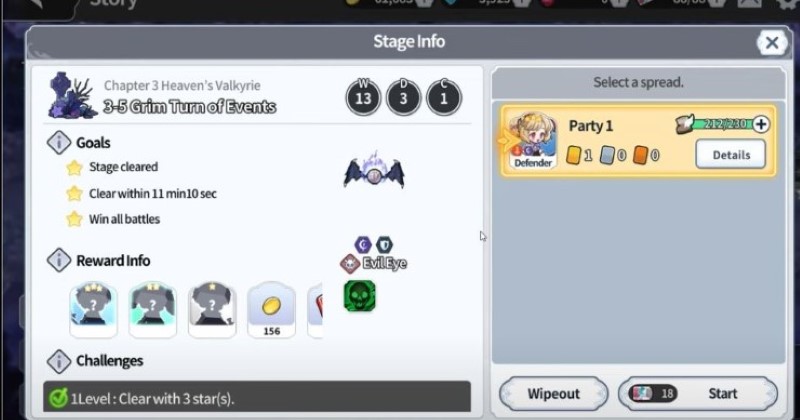 In Arcana Tactics, there are some specific conditions while playing missions. If a player meets these conditions, he will be rewarded stars. There are three stars that a person can get while completing a mission. These stars will decide what challenges you complete. For every star you will get, you will complete a challenge and will be rewarded with some things. It's mostly gold, gems, and upgrading material that you can get as these rewards.

So if you are someone who just started the game, completing these missions with three stars is very important as they will help you late game by giving you a lot of resources. Even if it takes a few tries for you to complete certain missions, you should go for it, as getting these three stars will help you tremendously. Also, read these missions before diving in a game, as reading them while in-game may cause you to lose your shorts at a 3 star clear.

These tips will not only help you dodge mistakes that other players did who just started out. But it will also boost your gameplay which will allow you to utilize your time more efficiently. These tips will allow you to utilize your resources perfectly, making your F2P experience even better. If you are someone who is looking to get better at the game, these tips will help you tremendously. Even if you are someone who's playing the game for a while, this guide can be just the little something you need. You can also download Arcana Tactics on PC By clicking on the link.