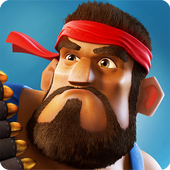 Boom Beach is a real-time strategy game that was developed by Supercell, creators of the popular (Clash of Clans). It is a combat strategy game and players can create their own fort on a Pacific island and attack enemy islands in exciting mass battles.

Fight an epic war against the evil blackguard. Take your expeditionary force to beautiful paradise islands invaded by the enemy, and unlock the secrets of this tropical paradise. Fight for every beachhead, free enslaved islanders and explore the uncharted archipelago. The fight becomes a race to harness the ancient powers hidden on the islands.

The gameplay is very similar to Clash of Clans: players have to create their own base near the beach of their own island and attack enemy islands in order to obtain a variety of rewards. In Boom Beach, you can also fight against other players on the internet. You just have to attack their islands and try to overcome their defenses with your troops.

In Boom Beach, players will find more than ten different types of defensive buildings and different attack units. They can be combined in a myriad of different ways in order to achieve the best balance between attack and defense.

As a Supercell strategic style game, Boom Beach need to be run online with the internet.The game is free to download and play. However, some game items can also be purchased for real money. If you do not want to use this feature, please set up password protection for purchases in the settings of your Google Play Store app.

- Play with millions of other players, raid hundreds of enemy bases for loot
- Battle for control of precious resources to upgrade your base against enemy attacks
- Explore a huge tropical archipelago and discover the mysterious power of the Life Crystals
- Face fearsome Blackguard Bosses and uncover their evil plans
- Join other players to form an unstoppable Task Force to take on co-op missions

We think you may also like the Games: TEKKEN™; Point Blank: Strike, and Mobile Legends Bang Bang, ect. How to Install Boom
Beach on PC

Why Use LDPlayer for
Boom Beach PC