Rise of Cultures is a city-building strategy developed and offered by InnoGames GmbH. This game was released in 2021 on 1st November and is available for free in the stores. The game follows the concept of civilization-style strategy or management, which aims to provide you an opportunity to create and build an empire and further watch it evolves from one era to another (developing various cultural settlements).

The game gives you the experience of various civilization periods from the stone age to modern times, the bronze age to the industrial revolution era. You can even get the vibe of our great history, a combination of destruction and utopia.

This Innogames title is all about constructing epic cities, exploring a wide range of cultures, developing one's civilization, involving in a multiplayer world with advanced amenities, making strategies, and exploring more about mankind. Well, players, this is the game one could get interested in if they are interested in exploring the civilizations. The developers also claim the game to be addictive into the future.

Let's just begin reviewing this semi idle strategy game and find out about it.

So players, the Rise of Cultures offers mankind's history firsthand and says, "Build, Produce, and Explore." As you install the game and try your hand, you will experience fun and quite engaging gameplay. As you begin, a notification pops up from Felix (the head of your workers) guiding the players about how to start the game and move forward, teaching all about the construction of farms, harvesting food, building a residence, researching about the settlement, earning coins, upgrading and much more.

The gameplay becomes easy and interesting because a good helping hand (guide) makes you understand the game and its works. Moreover, setting up a well-settled community with all required facilities and going through the various ages is what spice up things. Well, the various ages provided are as follows, but yes, these are not the only ages, but the game keeps on introducing the new ones too: 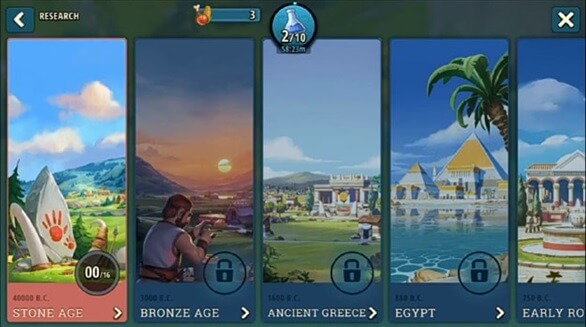 Now comes the graphics, so the game offers mind-blowing graphics. Each civilization age is showcased so well that the players will get the actual feel of those particular ages. Moreover, the graphics make the game more interesting by keeping the player engaged due to the clarity, smoothness, and colors. It is fun to play the game with the in-game sounds, which adds to getting the real experience. Also, the game focuses on even minor details like what kind of language the workers speak depending upon the ages they are working in, which makes the game much more appreciable. Well, the game is all about settling the civilization with the help of workers. For the settlement, a lot of construction, building, and collection is required done by them. Here the tasks are small or large, and accordingly, it depends on how much task force is needed. The large tasks require multiple workers, while the small tasks need fewer workers and less time. But here is one of the negatives that make the game a bit boring according to the players: the game could leave you waiting for a long time and leave you doing nothing. So you need to make decisions wisely.

Learn to be a leader

"A good leader needs to have a strategy."

Although the game is based on constructing and exploring, it teaches you to be a leader. To build the civilizations, you need workers, right? Yes, so when you have workers, you need to assist them with what they have to do. Hence this teaches you the quality of leadership, where you need to make correct decisions to bring a better evolution and change.

In the game, you have to scroll to the build menu to craft the barracks, homes, harvest, etc., and then the workers are the ones who will work once you drag and drop the required stuff. The leader (which is you) must have to take care of the workers too, and the game offers you the experience of how you could do that. You needed to ensure their happiness, food, safety, and productivity. So, going through all the tasks, the players can evolve into good leaders. Shelling Out Cash: A Barrier to Gaming Experience

One of the sometimes irritating features is the "pay to play." Although there is no doubt that the game is an idle strategy based game, sometimes it leaves you in such a situation that if you want to complete the task instantly, then you need to shell out some cash in real as the gems or coins collected may not be worth buying the stuff. And if you are not interested in spending some cash, you will be left in the situation of wasting a lot of time. Sometimes, the cash /payment system seems a barrier in the game.

The games like PUBG and Free Fire are the most demanded games, and one of the reasons for it is the fascinating and engaging interaction among players as teams to secure victory. But talking about the interaction among players in Rise Of Cultures, the chatboxes are all empty. The players are so involved in their gameplays to upgrade, win and battle that they find no time to interact, which is disappointing.

So this was all about the review of the Rise Of Culture, and we hope that the developers will take the necessary steps towards some of the factors affecting the game's performance. Other than this, the game is all well, successfully entertaining the players. Rise of Cultures Beginner's Guide for Getting Started