Epic Seven from Smilegate is rapidly gaining popularity among game players, and overall it has massive popularity in the world of gaming. With its unique tier list and its abilities, the game has been more developed than before. So with the newest updates and newest features added to the game after May 27th, all players will be benefited from the Moonlight's Blessing Update. If you want to build your account more efficiently, you can download Epic Seven on PC to enjoy better gameplay with LDPlayer. Now below we are going to identify the best heroes you can pick up from the Moonlight's Blessing event. However, let's first try to understand how rare the moonlight heroes are for every players!

What is Moonlight Summon?

Moonlight summoning is a type of summoning available in Epic Seven, and it only summons the heroes categorized under the Moonlight. Moonlight heroes come with light and dark heroes, and they are known to be the perfect heroes in the game. You need to try better luck in having these summons as they are the best ones to the Epic Seven.

In case you're interested in how to get Galaxy Bookmarks, we also share the different ways on obtaining Galaxy Bookmarks here. You will get like 4 to 5 summons per month for Moonlight Summon and you're not guranteed 5-star Moonlight heroes. 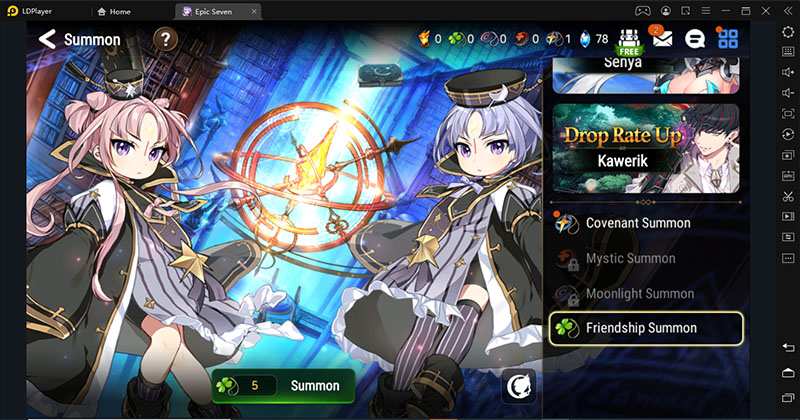 Who to pick in Selective Moonlight's Blessing?

Arbiter Vildred is a Dark Thief coming as the first pick-up of the list.

In a words, Arbiter Vildred has passive revive and full AoE attack as a DPS. This allow you to build Arbiter Vildred very squishy with severe output damage and use him in PVP. For PVE, his S3 can clear stage 1 and 2 very efficiently as 3rd skill has no cooldown if you defeat an enemy. So Arbiter Vildred is both good at PVE and PVP content, which makes him the Top-1 selection for your team build.

Specter Tenebria is a Dark Mage coming as the second pick-up of the list. 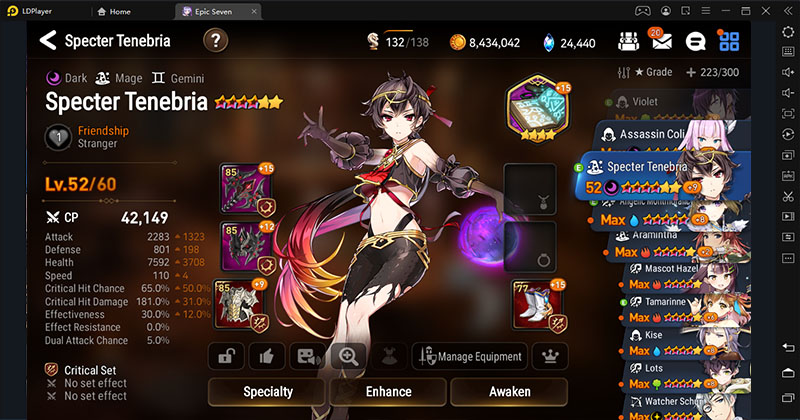 That is to say, the hero Specter Tenebria is a great single-attack damage dealer. She gains bonus attack damage (up to 50%) when anyone dies (both ally or enemy). This works in Raid as the bonus carries over and does not reset. She also deals a lot more damage on her skill 3 based on the number of debuffs on the enemy. If someone dies to her skill 3, every enemy team member loses 50% combat readiness.

Martial Artist Ken is a Dark Warrior with counter mechanics.

This guy is one of the best characters in the game due to the way his kit works. He has 100% counter chance when he gets hit by a critical hit and 30% counter for a normal hit. Put on lifesteal set, some attack, health, defense, effect resistance and he becomes very scary. He is strong in both PvE and PvP (offense and defense due to counter mechanics).

While he is vulnerable to stun and sleep,, the key to having a strong Martial Artist Ken is building him as tanky as possible while still supporting his sustain and damage. In PvP having ways to prevent him from succumbing to being 1 shot, Stunned, or Slept will typically lead to positive results. However, Martial Artist Ken won't be a good choice for the Moonlight's Blessing event as he needs decrent equipment to power his stats. A "No" for the pick but a "Yes" if you really like him!

Judge Kise is a Light Warrior with great AOE damage. She has AoE dispel on S2 and higher chance to reduce enemy skill cooldown on S3. With soul burn, she can do a lot of damage by using S2 and then S3. Her third skill decreases all enemy skill cooldowns, forcing them to use only basic attack. If she gets that off, the fight is usually over in PVP.

She also gives defense break on her first skill, which is extremely useful in both PvE and PvP situations. That makes her a great all around unit, but she shines more in PvP with her kit. Having a mage with a +30 Tagahel’s Ancient Book for the soul burn is vital in making her S2 to S3 combo work on offense.

Kise is also gready for great equipment so she's also a "No" for beginners in Moonlight's Blessing summon.

Dark Corvus is a Dark Warrior as a frontline tank.

Our next hero after Judge Kise is Dark Corvus. Dark Corvus is the best guy to deal with four enemies at once, and he is an unstoppable guild war hero to the game. He may require a lot of health but has a good amount of resistance to the effects. And also, Dark Corvous has better speed and defensive strategies to beat his enemies.

Dark Corvus is a tanky warrior that can use a strong single target attack that penetrate defense after some turns have passed depending on how many times he gets hit. This is very good against squishy teams that don’t do enough damage to kill him. He works very well in PvP, particularly in defense teams with healers and tanks. Also in Guild Wars, he has kill potential in defense as well.

Due to his slow way of killing things, he isn’t a very popular character among newer players, but for veterans and higher level players in PvP, they do know that he is good in long battles. He scales very well with his HP. Also a "No" for Moonlight's Blessing summon.

Ruele is a Light Soul Weaver who can revive ally and grant invincibility.

Ruele is a go-type healer to the Epic Seven, and she got every tool for the disposal. Ruele is a great healer, reviver, and also a person who can grant you invincibility. You need to make Ruele into a well-balanced composition to perform great, and she can revive in any situation with the right kind of balanced abilities. The only downside to her is that she doesn’t have an AoE heal for the team and requires soul burn to do so. She could be your pick if you already have strong DPS in your team like Sigret.

Other Things You Need to Know About Moonlight's Blessing

1: Select one of six 5-star Moonlight Heroes to add as a Hero which will then be added to your list of Heroes.

2: Heroes that players obtain from Moonlight's Blessing will initially be restricted from certain game modes.

Battle: Unable to participate in defense teams in Arena, Guild Wars, and cannot be used in the World Arena. Unable to be used as a Supporter in normal battles and World Boss battles.

Other: Unable to be set as a Rep Hero, unable to be transferred, moved to Waiting Room, Memory Imprinted, added to the Journal, assigned to Dispatch Missions, gift Friendship items, use Hero Ratings. ※ While under these restrictions, summoned Heroes of the same kind or Unknown Slates from the Shop cannot be used on Moonlight's Blessing Heroes.

※ While under these restrictions, Moonlight's Blessing Heroes cannot be used for enhancing, promoting, or Memory

3: Players can lift these restrictions from their Hero by completing the given missions.

4: If the Hero is one that you already own, after fully unlocking the Hero by completing the required missions, players will receive 10 Galaxy Coins as well.

It's recommended to check Arbiter Vildred > Specter Tenebria > Ruele of Light > Judge Kise > Martial Artist Ken > Dark Corvus. This comes to the end of selective moonlight summon tutorial. If you want to get a new account and reroll for the best units to start a freshing adventure, here's a guide to help you do faster reroll in Epic Seven.