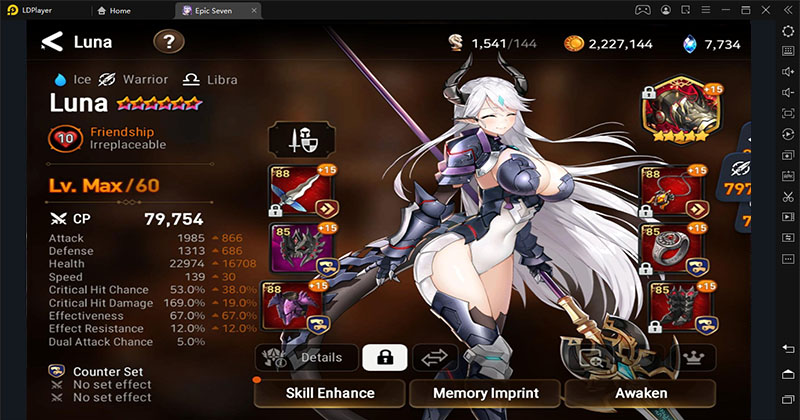 Now you can download Epic Seven on PC from here.

There is the most vigorous champion like Lilias in this Epic Seven, yet you can't choose her every time. So you have to go for another option. Among the every tier heroes in Epic Seven, now you can look into either Luna or Vildred. What is so special about them and which is the best to choose? Here we present you a comparison between these two heroes and let's begin.

Who is Luna and the Vildred?

We start our guide with Luna. In Epic Seven, Luna is known to be an Ice warrior, and she will be a limited summon in the game. She comes with the Libra Horoscope and best known for a single target aiming water warrior. Luna initially has considerable damage potential with her, and she is a highly rewarded character. There are multiple reasons behind it, and the first and foremost thing to happen is her multi-hit primary attack mechanism.

There is an Infinity Slash with Luna in behind to her high rewarded attraction, and when we talk about her whole kit, there are the most substantial assets with it to make her the strongest. There is a high potential Ragnar Spear built-in utility with this kit, and at the same time, it has the most excellent passive skill.

So who is Vildred? He is a Horoscope Leo that is known to be an Earth Thief. He is better helpful for AOE because he deals more significant damage to it. You can use this character for the side stories, hunting, and the speed farming world. Vildred can cleave every opponent in the Arena and also those who are in the guild wars. Take him as a farmer. So Vildred would be a great farmer with his snowball ability through mobs. 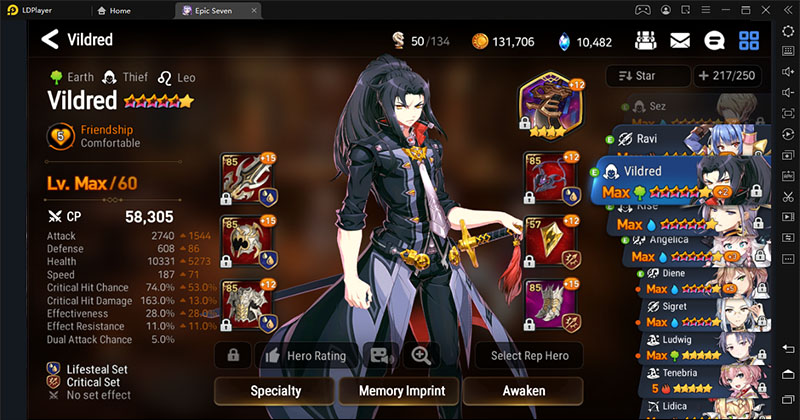 Vildred uses the snowball through mobs to trigger the extra AOE attacks happening in the game when there is any defeated. This happens thanks to his passive skills. If you use him in the PVPs, he can beat an entire enemy team at one shot, and it happens when he has an R booster with some buffs of speed and attack.

When we have to compare and select these two champions, we have to look at their strengths and potentials. So who do we start with? Let's start it the same as the previous with Luna.

The first and the main thing to talk about Luna's strength is her damage potentials. Luna has great damage skill, and with her passive, she becomes a boost up for the attack and the critical hit chances. The way Luna's kit-built is targeted with single enormous targeting damage. Her S1 multi-hit mechanism in the gameplay allows Luna to skill up with a 2.1x multiply power. It is a skill like a soul burn. 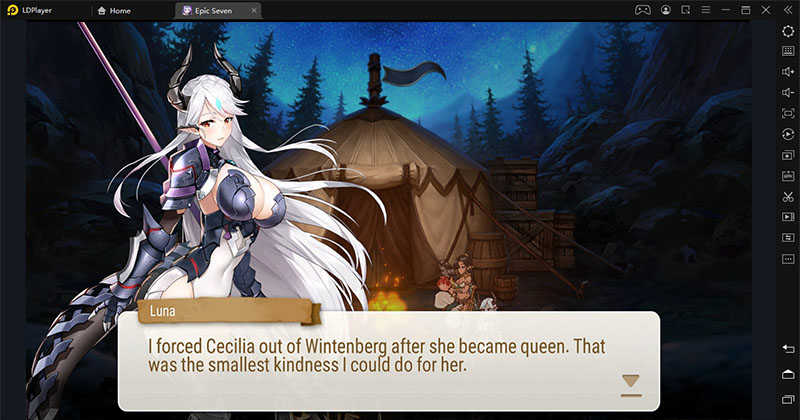 Luna has a low kind of gear critical rate in her abilities, and she attacks for the gear requirements. When there is a Dragon Knight's will, it provides up to 20 to 30% of passive attacks. Or it can be a critical hit boost chance as well.  This is a system of lowering the gear requirements to some extent, and it makes the Luna engage with a considerable amount of damage to the enemies.

And this can result in a hitting 100% cap for the critical hit chance.

Luna has an essential advantage for Ragnar Spear. S3 attacks enemies with the most vital elements, and it increases the versatility for dealing with Luna's enemies. You can have so many benefits with this elemental damage because it increases the critical hit chance. And also, it will be resulted in having options for adding buffs like S3 defence decreasing.

If we talk more about S3, it has some high basing for multiplayer, and it can increase the critical hit chances allowing this skill to be at its maximum effectiveness.

He is the whole king for the AOE. Vildred's skills seem to be revolving around the attack, and he can deal with an attack for several enemies simultaneously. When there is an enemy killed, Vildred is gain some additional buffs for him. You can identify this hero as one of the DPS heroes who have AOE S1 skills with him, and those types of heroes are rare. Eventually, this hero becomes a more powerful farmer and for the Azimanak Hunts, Banshee.

Vildred is the one hero that has the full base attack stats for the entire game. All these attacks of him are super speed, making him perform more significant damage to his enemies. When there is an enemy who dies, Vildred adds up 20% of combat readiness for himself. And also, he can gain two turns of attack buffs every time he kills enemies.

All of the sell buffs Vildred gains make him less reliant than the other DP units. So he is freeing up the slots for compositions of 3 manhunts and the clearance of speed. He can give allies some additional speed to 12+ when he got his memory fully imprinted. It is so much helpful in the PVP, and it goes in best with CR pushes. So eventually, your team goes for the first, and Vildred can diminish the enemies in a single turn.

She is only consistent with a limited team utility. This happens because of her self-focused skills for passive with the single debuff. Although Luna has offence-related damage potentials with her, she lacks the team utility.

When talking about the HP values of Luna, in the times where S2 providing defensive bonuses, she can’t use them effectively. It happens especially she is under 50% of her HP. So basically, Luna is a hero that has low survivability to the game.

Although Vildred is capable of attacking multiple enemies at one time, he is lack with his single targeting damage. You can consider Vildred as a tanky team composition because every opponent in he is capable to avoid the first strikes of Vildred.

When considering the elements, Vildred has a restriction to use earth elements. He can't use it especially in PVPs which he becomes the sole damage dealer for the team. So literally Vildred has some elemental disadvantages with himself as he is lacking in versatility to damage dealers who come from light and dark AOE.

There are three skills for Luna and they come from active or passive. Skills are shown as follows.

Infinity slash can stab a target enemy randomly by several times. In here skill cooldown will be decreased by 1 to 3 turns and there is an increase of the damage dealing based on the attacks performed.

Dragon knight’s will can increase the strength of the attack and it also increases the critical chance. Critical chance will be rise by 20% if only there is a 50% or max health for the caster. And also there is another increasing method for defence. This defence increasing can decrease the suffering chance of a critical by 20%. This also happens only if there is 50% or less health for the caster.

Ragna's spear can soars right into the air and it can hit all the enemies with the use of a spear. You will use a chance of 80% in here to decrease the defence happening for two turns. While using this skill, Luna can attack the enemies with a strong element use.

Vildred also has either passive or active skills and there are three.

Sweep can attack two enemies rapidly and Vildred uses a sword storm in here. Damage that happens here will be equal to the speed of the caster.

Blade ascent is using a sword storm for attacking her enemies. The damage output that happens here will be increased to the speed of the caster.

How to awaken the Luna?

It needs the following items.

How to awaken the Vildred?

Luna will perform great in the following artefacts.

Pros and Cons for Luna

Pros and Cons for Vildred

When we compare Luna with Vildred, Vildred is the one who is best for the PVP. He has a tremendous attacking skill than the Luna, and he goes well with his team. Vildred is excellent when he uses with his team because he benefits the team. He is the main man for the AOE.

Whenever he performs attacks for the enemies, Vildred can improve his stats and powers while making advantages for the team. And most importantly, Vildred is the best to attack enemies because he can attack multiple of them in a single shot.

Although Luna is a highly rewarded character, she has some low survivability, so that it doesn't go to help you in PVP or AOE. When we talk about her team utility, it also not helpful same as the Vildred. If you choose Luna, your team have to deal with a lot of auxiliary lacks and buffs. So it depends, and if you still want to select Luna with her damage potentials, it is ok. But our first and the best recommendation is the Vildred.

Vildred is a more incredible warrior to use in your whole gameplay to deal with PVP and AOE. So when reroll, you have to choose him. Can you get him at once? Chances are rare and are you tired of performing several rerolls for your favourite hero? If so, don't worry. LDPlayer's Multi-Instance Sync feature is waiting for you.

Activate the multi-instance sync feature on your LDPlayer and get a chance on performing several rerolls at once. So will be no more suffer or waiting. There are many rerolls a once; you can get your favorite hero Vildred in a short time.

When we consider the capacities of Luna and Vildred, Vildred will be an all-time perfect hero due to his outstanding skills. We do not insist for any player not choose Luna. It depends on the player's opinion, but Vildred can be identified as the powerful hero for Epic Seven based on our experience.