Epic Seven with 2D, RPG features on free to play modes In the adventure, is exploring several characters in the realm of Epic Seven. The game has significantly become popular throughout the world with the variety of the cast and more engaging storyline. There are anime graphics which has epic styles. You will see both PvE and PvP types with real-time PvP challenges. The players have enough freedom to select their team and move forward in the game. 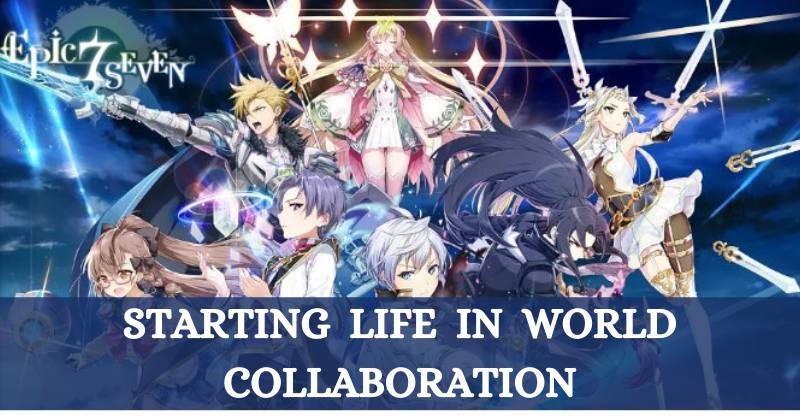 Details of the event

The characters of Emilia, Ram and Rem will come to the realm of Epic Seven on the Orbis via the Chaos Gate. There will be a new combination happening  with the of the Re: ZERO starting life in another world and Epic Seven. This will happen over the two weeks for all the heirs. The scheduled title screen change will happen on the 5th of August after the required maintenance, and it will end on the 19th of August (Thursday) at 2.59 am (UTC).

Side story | Guests from Another world

There were some gossips about the Chaos Gated, which has opened from the forests of Ritania. Guests from Another World's side story will start as a special combination of the Epic Seven and Re: ZERO starting life in another world. It has scheduled to begin on the 5th of August after the required maintenance, and it will end on the 19th of August (Thursday) at 2.59 am (UTC). You can enter by clearing the 1st episode and stage two to ten with Sage Minaret.

The side story will be active for two weeks, and all the stages will be available in unlock mode from the initial day. You can get five-star Re: ZERO and Ram by participating in the event. Apart from that, you have a chance of getting a five-star artifact and severed Horn wand also. 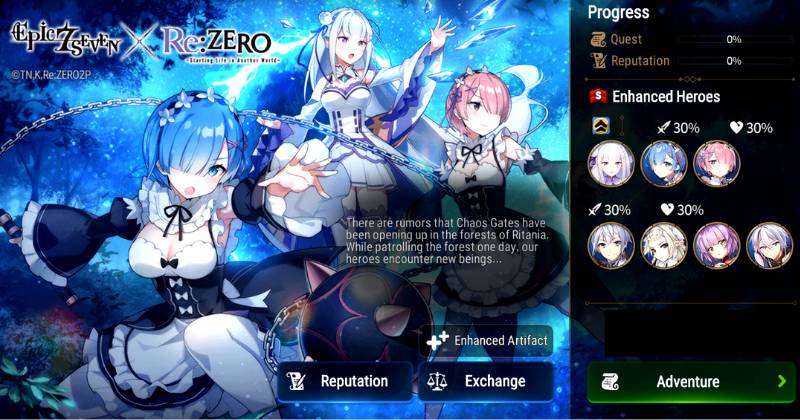 When you clear the stages of the side story, you can get event currency. Apart from this, you can get other rewards of the event Guests from Another world also. This has excluded the story stages. The main reward is Aqua Crystals. It belongs to the category of gem stars named Lugunica. It will be easy to forge and ideal to convert as crafting accessories.

You can exchange the event currency for items, and it will delete with the expiration of the period of seven days after the end of the side story.

There are several enhanced heroes from different categories in this side story. The heroes from the category of Lead Hero Buffs will have benefits of level 60 and awakened to six-star. They have enhanced skills, and there is a 30% increase in attack and health. The heroes that belong to this category are Emilia, Ram and Rem.

The other category is enhancement. They benefit from attack and health increase by 30%, and the characters in this category are Ras, Iseria, Adventurer Ras, and Mercedes. There will be a high stat for all the enhanced heroes inside the story stages.

There will be two event equipment, Epic Ring Lucky Eye Bracelet and Epic Necklace Knit Brooch. Both of them have good attack and critical hit damages, respectively. The players can get extra event currency when they use the hero equipped with these artifacts.

With the enhancement, there will be an increase in the limit break level of artifacts with the increased available currency. This will be applicable only once, based on the number of potential currencies at the end of the battle. The main types of artifacts are Guardian ice crystals, Azure comet, and Severed Horn wand. In the side story, you will see a total of 12 stages. It will have included several muli-difficulty stages, and they are S.Goblin's Den and S. MolaGora Habitat. The players can unlock these stages by completing the previous stages. The stages of the story do not need Energy to get in, and there will be no battles. The stages will not offer event currency also. When you complete the 10th stage, the Hell difficulty of Forest of Open Dimensions will open five times during the active period.

There will be a special illustration of Tirel Castle Dining Hall with the completion of the 9th stage. You can see that through the Journal and the Art Journal. Then you have to go to the Side story and then Guests from another world. Side story | Flowers of fortune

This story happens when Emilia, Ram, and Rem is at the Tirel Castle. It has scheduled to commence on the 5th of August after the required maintenance. It will close on the 19th of August at 2.59 pm (UTC). The entering requirements will be the same as the previous story. During the event, you have to go through by clicking the Start button and then read the story to begin the missions by clicking the puzzle pieces.

The puzzle missions are assigned randomly, and you cannot change the uncompleted. There will be ten free puzzles, and after that, there is an increasing additional charge for each, but there will be no change of the rewards. Players can take three missions. When the story moves, they can change some pieces depending on your level. The event button and story are inter-connected. They can see the already viewed stories and the prologue.

She is a kind girl who helps by her best during difficult situations. There will be a drop-down of her character in this event. The Emilia and Guardian ice crystals limited summon event will start on the 5th of August after the maintenance and end on the 19th of August at 2.59 pm (UTC). You can check more details on the Hero Journal of Epic Seven. Emilia will have a new artifact of Guardian Ice crystals in this event with high powers. She is a maid of the Roswaal Mansion with good skills in household chores and works at the Tirel Castle as a calm heated girl. There will be a drop-down of her character in this event. The event of Rem and Azure Comet limited summon will start on the 5th of August after the maintenance and will end on the 19th of August at 2.59 pm (UTC). Rem's New Five-star artifact named Azure comet will be available at this event.

You can check more details on the Hero Journal of Epic Seven. Emilia will have a new artifact in this event with high powers. 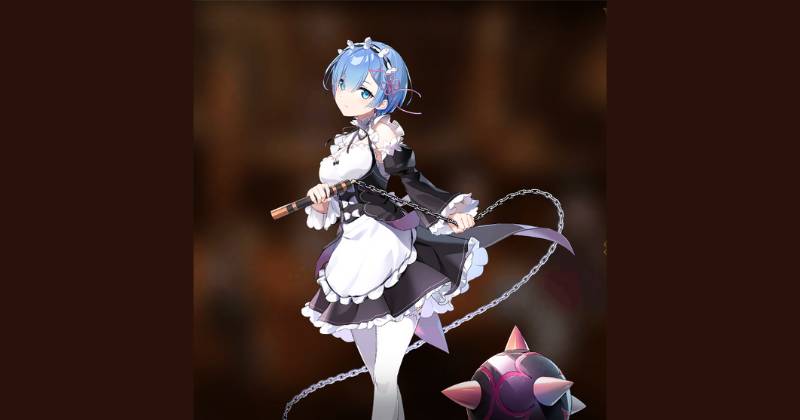 Ram is a self-centred and biting older maid of twin maids who works at the Roswaal Mansion. This character will be available at the check-in event and the side story of Epic Seven x Re: ZERO collaboration. Her new artifact of Severed Horn will be available in both mentioned events.

You can try to earn these heroes with very few steps on LDPlayer. You don't need to wait on so longer rerolls. It will only take seconds. Use the Multi-Instance Sync Feature. You will earn several copies of the game, and you only have to perform rerolls on all those copies. The most needed hero will come to you within minutes.

Want to know more on how? Don't worry. Just give a visit to our Reroll Guide. Ras and friends come to Wittenberg with the boost from Ritania. But the plan of meeting Dragons becomes a failure in the end, and the story flows with the unexpected suggestions of Ras. You can enter the story by clearing the 3rd chapter in the 8S stage of Valley of Resentments. In the map, you will see ten stages with Labyrinth type and optional stages. There will be ten quests to complete in the 9th chapter of Wittenberg, and you can get 50 Skytones by clearing it.

You can open the AP exchange of Wittenberg by clearing the 9-10 Risky Cliff. You can buy items according to your Trust level, which you obtain by completing Trust missions. There will be the same NPC of the nation, which is shared by the Trust level. There will be a limit to purchasing some items at the exchange shop. Some items are Horn of Desire, Small Sun Badge, Ring of glory, and Dream time circuit. The main reward of this quest is the Epic Helmet Conqueror's, Horned Helm. You can get trusted rewards by reaching the 300 Trust level of Wittenberg. There will be a warrior flame, Wittenberg Home of the Dragon Knights background pack, and three silver transmit stones as the rewards. The Fate at a Crossroad will add to Episode three of chapter nine, NPC Lucius to chapter four of Dragon valley, and 8S Dragon valley to episode three. There will be three exclusive equipment for five-star hero Choux, four-star heroes named Assassin Cartuja and Kitty Clasriisa. They will add to the Hall of Trials exchange through Wisdom's Gaze. The stats and skill effects will assign randomly after the purchase. The exclusive equipment of five-star heroes named Charlotte, Mort and four-star hero Angelica will add to the Alchemist Steeple. The main information on equipment is as follows.

The drop rate up | Luluca and spirit breath

You will confront the elemental ice mage and Luluca. She can reduce the defence of enemies and boost the viability of allies, and you can get mage-exclusive artifacts, spirit breath. They are created for mages who use not-attack skills. It will start on the 5th of August after the maintenance and end on the 12th of August at 2.59 pm (UTC).

There will be five dragon knights of Wittenberg from different hero sources. They will be available after the maintenance of the 5th of August. The sources of heroes are as follows.

The main skills of the new heroes are as follows.

You can give a check on Full Tier List from here.

Other adjustments and improvements

With this huge update, there are several advancements in the game. The main features are as follows, In this month, Epic Seven will launch the largest update of their game. There are several side stories with many interesting features, and it will offer a huge pack of rewards to the players. You will see many heroes and artifact introductions from different star rarities. You will get more amused by seeing the drop rate up of characters with amazing features. So, you can enjoy this updated with the advancements of the game.