Hey, gamers. Let's begin the Epic Seven with 2D characters to prevent the destruction in the 7th world. Yes, you wouldn't be able to full without the help of the powerful heroes that Epic seven hides and your success will only come through the gameplay with these powerful heroes. So who is going to be our hero? Today it is the Angelica. 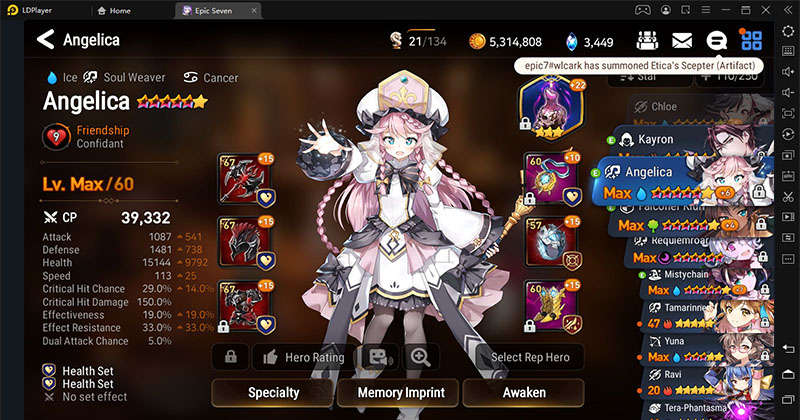 Angelica can be considered a great hero to play along at the game with all level-ups and skills. She is a better healer, and now you would be very interested in building Angelica. Here is the build of Angelica and you can download Epic seven on pc.

This hero is a tiny hero compared to others in the gameplay of Epic Seven. She is well known as a great healer to the Epic Seven, and Angelica belongs to the water soul weaver. Most of you see this character as a greater healing power and a support ability to the defense mechanism.

She has some high multipliers with the lowest cooldowns, and Angelica is a hero who is capable of providing healing with a continuous near healing despite the immunity buffs and the barriers.

We can clearly say that Angelica is a powerful front-line tanker with high-rated survivability. She has a high base HP with her and also got the defense stats as well. So it makes Angelica into a top among all the Epic Seven tier heroes and will be an excellent selection for any PVE or PVP content. Angelica can give her team the debuff immunity for almost two turns, and those turns can be extended into four times. 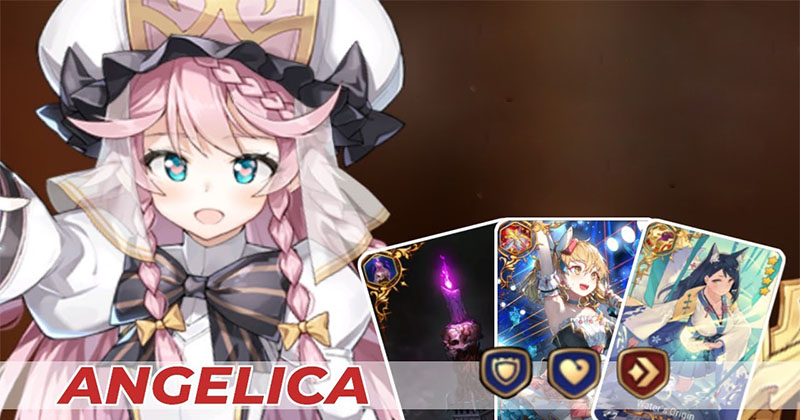 If we talk about Angelica's first skills, it is something less in for stun, and it will be helpful when you get lucky stuns against the key enemies. But remember, Angelica has a slow base speed. You can use this character in Abyss, Wyvern, Raid, and the golem based on her need in those situations. You can obtain her from a selective summon, so no need to worry too much about taking Angelica.

We can say Angelica is a non-mandatory character to have within rerolls. Her specialty for the need would change with the Angelic Montmorency, and she is becoming an overshadowed hero with it.

Angelica has a fantastic healing ability, as we mentioned before, so she is capable of recovering a large amount of HP for a least 1 to 2 allies in a speedier two turned cool down. And also, this hero will provide healing with some barriers. The most excellent base stat she holds is the high base HP and the defense mechanism.

She becomes so much power as a tanky healer and from it eventually turned into a hero who cannot be down by the enemies easier.

Angelica has a strength to soul burn for some semi-permanent immunity, and when she uses this, Angelica's third skill would be extended from two turns to four and it is“Guide of the goddess “. It has four turns on cooldowns, and literally, Angelica keeps her buffs for inactive immunity status for the whole team by using the power of soul burn in every four turns.

Angelica’s Specialties are the fear for dispatch mission and also she has a special effect for rewarding bonus with +10%.

The hero Angelica lacks in her Immunity Buffs. Immunity buff will be very useful for you to protect the team against buffs that happens in subsequent. So there is a disadvantage for Angelica in that she is less powerful for removing these existing buffs.

Consider to other heroes in Epic Seven Angelica is quite a slow hero and she has only an 88 speed of base. You need to build this hero with some speediest gars. Otherwise, you can’t expect a good speed with her and it affects her healing ability.

She is built in as a front-row healer tank. Angelica builds the HPs, and also needs a high speed to make the best out of her healing skills cool down. So we would recommend for any player to equip Angelica with some speediest set of the main stats to gain her boosts.

Equipment for Angelica goes main with HO and speed, and her sups are coming with HP, Def and the Speed. Sets would be speed and health.

Extra heals making Angelica into the second skill, and it would be from a considerable amount. Special it would be a significant amount to the health

The defense is somewhat harder to deal with, and it allows the powerful attackers to make their turns as fast as they can. They would never need to build a high speed

CR push helps Angelica make a great deal with her low base speed because she is low with speed.

Angelica does not come with the highest debuff removal and her kit so that this would be very helpful for her to deal with that lack.

The priority for 1 turn cooldown on this hero would be S3. Remember there is an S2 and it is always an optional one but it makes you so good. S2 will be very effective on every content you play on Epic Seven. If you use it on molagoras, it would be not worthy for S1.

How can you awake the whole powers of Angelica?

To get the maximum outcome and the benefits from Angelica, you have to awaken her into full. It has to be done with elements, and you have to collect them from awakening Angelica. Following are the items you need to manage to do so.

Which build would be suitable for Angelica?

Angelica is not a fragile character, but she has to be alive as long as she can. The reason for it is she is the one who continues to give the super with healing for the whole team. You have to remember that keeping Angelica close to you makes her nearest characters shine. Expect to the life a bonus speed will do with soul weave, and she is pretty slow with her initial stats.

If you want to build Angelica there are two types of solutions. The first is taking life (x6). This would never be the most sought build, but it can transform Angelica into the most outstanding real tank. Your other solution is to get the speed x4 and 2x life. It would be a great build that results in increasing the flexibility of Angelica.

Pros and Cons for Angelica

Angelica is a healer that has a great immunt8y with her, and she is a well-known barrier for her third skill. So it is a good mark for our Angelica. She can be identified as good healing to her second skill along with two types of cooldowns. Angelica has a tiny little chance to be stunning on her skill one, and he is a good strength healer for any kind of PVE and to the Abyss. Those are the well-known benefits of using Angelica.

So if we turn our heads into Angelica's cons, she has a low speed for the base. So it would be a disadvantage for some situations in the gameplay. This hero has no cleansed, and she is kind of lack for the use of Angelic Montmorency.

There are many tier heroes available within the game of Epic Seven, and it would never be easier to get a character for your need at once by rerolling. So if you need to reroll Angelica as a hero for your gameplay, you would need to perform several rerolls and a lot of waiting until you get the right hero into your hand. Waiting and time spending is disturbing for any kind of player. So there is a solution in LDPlayer as Multi-Instance Sync.

The Multi-Instance Sync feature will let the players perform several rerolls simultaneously in Epic Seven. With the use of several copies on your emulator, you will have numerous chances to earn a hero at the same time. So rerolling would never be this much easier to make Angelica and don't spend any time. Let's reach our best healer by only paying a little time for the reroll. 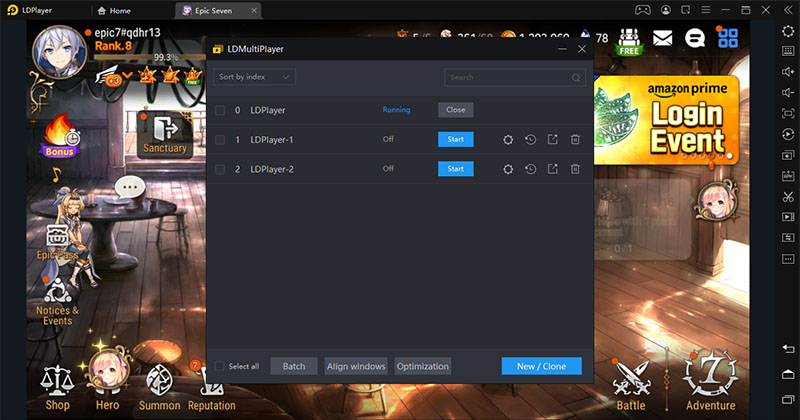 Angelia would be very much helpful for dealing as she is a perfect healer. You can use her for any type of PVP content, and she would be a shining start for any teammate. Unless her low speed, she is a good tank healer, and her maximum skills would be gain through the enhancements. So give her a try and make your gameplay on Epic Seven better.

Ragnarok Labyrinth Tips & Guides How to level up fast