The perfect Guide for QXR-Call of Duty Mobile

Because of its excellent and lively gunplay, Call of Duty Mobile is in the league of the most popular shooter games on smartphones right now, as well as one of the most famous battle royale games. As the game's popularity has grown, a large number of new players have begun to join. With so many other guns and load-outs to choose from, it can be challenging to engage in fierce and dynamic gunfights at times.

This game has many fans around the globe who loves to play this game on PC, which can easily be played by using an emulator. The perfect emulator solution for you is the LDPlayer emulator. In Call of Duty: Mobile, QXR is one of the most potent weapons. It wasn't a viral weapon until it received a significant upgrade in the most recent update. First, the weapon's rate of fire was increased. The damage hitbox has also changed; the headshot multiplier is 1.3, while the upper body multiplier is 1.2. Finally, the weapon's precision has been improved. SMGs are one of the most often updated weapon types in Call of Duty: Mobile.

They now have more strength and agility in close-range combat, making them the ultimate weapon for a run-and-gun strategy. They're also more accurate at longer ranges, making them better for mid-range fighting. With this in mind, the QXR is the SMG that has gained the most from this update. Many players have chosen it, and the three separate bonuses make it even more viable in this game.

QX is a robust SMG with good damage, a fast fire rate, and excellent mobility. It comes with only 40 bullets in the magazine by default, and it fires at a rate of 867 shots per minute. In comparison to other popular SMGs, the default mag size is adequate. The firearm has a quick reload speed of 1.6 seconds, and a full reload time of 2.4 seconds. 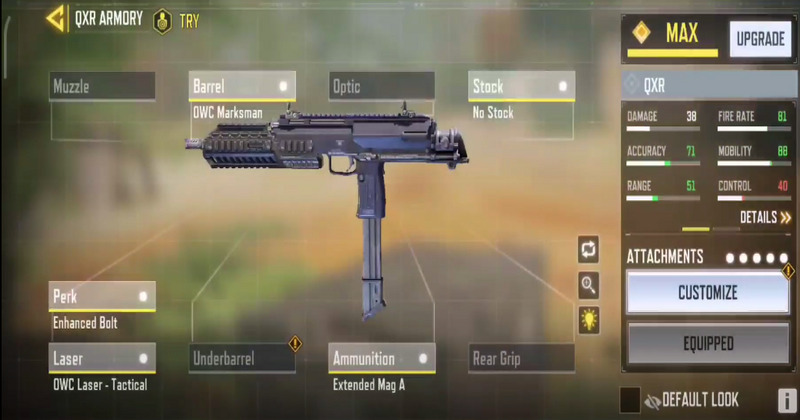 Range and Damage of QXR:

Now let's look at the weapon's damage and range to see how it performs in terms of time to kill at various ranges. For a long time, the QXR has been the preferred SMG among players. The weapon has also received numerous upgrades, allowing it to be used in various battle situations throughout the game.

The new update now deals 19 damage from 10 to 16 meters, 23 damage up to 9 meters, 18 damage from 17 to 26 meters, and 16 damage beyond that. A headshot now deals 1.3 times average damage, while an upper-body shot now deals 1.2 times average damage, thanks to three-body multipliers. This is a significant improvement for this weapon. With the rapid-fire capability, it can kill in four shots inside ten meters. Due to the low default damage, the default TTK in MP isn't particularly impressive. If you can strike the enemy's upper body or head, though, the damage increases dramatically. It's a different tale in BR.

Weapon damage in BR is more inconsistent due to the vest's damage reduction; it has one floating damage across all ranges. Even with the damage reduction, QXR's close-range time to kill number is still highly amazing. The weapon now performs better in mid-range combat, thanks to the new damage enhancement. In practice, QXR has risen to the top of the MP weapon list.

In today's climate, this weapon is capable of adapting to any situation. To rank this weapon, it has modest default damage, decent accuracy, and excellent weapon mobility. As you can see, QXR's primary strength is reliant on upper-body shots in close-to-mid-range gunfights. It's undeniably the game's new meta. It's a potent weapon, regardless of who wields it.

The Enhanced Bolt perk increases the weapon's fire rate from 867 to 980 RPM, making the QXR one of the game's fastest weapons. For all QXR builds, it's a must-have accessory. Because the QXR is so strong at close range (up to 10 meters), investing in the OWC Marksman barrel is recommended, which improves the weapon's damage range by 30%.

Weapon mobility is critical in multiplayer games since it impacts how quickly you can kill. To increase weapon mobility, use the No Stock and Stippled Grip Tape. Use the OWC Laser Tactical to complete the build, which enhances weapon accuracy and helps with ADS speed. This is a well-rounded MP build that outperformed the default gun in multiplayer games. The default ADS frame rate is 17 frames per second or 284 milliseconds.

Three frames lower the ADS time with this build, which is about average for SMGs.

Let's compare recoil patterns next. The default QXR's bullet spread accuracy is unsteady, and it has a lot of vertical recoil with a bit of horizontal recoil to the left. Even though the recoil is hardly increased, you will notice a substantial improvement in weapon accuracy with this build. To summarize, this is a well-balanced MP build with solid mobility, increased damage range, and increased fire rate. It dominates close-to-mid-range combat, and it can kill up to 13 meters with four shots. 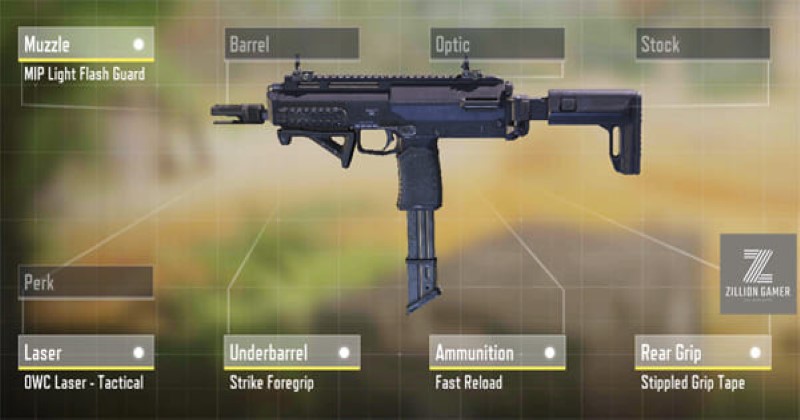 The weapon damage range is always your first worry in BR games. To begin with, the Enhanced Bolt perk is still required to boost the weapon's fire rate.

Then, to increase the damage range, utilize the Monolithic Suppressor with the Marksman Barrel. These are the weapon's only two range attachments. They can improve the weapon's damage range by 55% when used together. Because weapon accuracy is crucial in BR, use the Granulated Grip Tape with the OWC.

Laser Tactical to improve weapon accuracy. This build does not include an extended mag or any optics. You can use any of them to replace the rear grip if you desire. This is a long-range BR construct that outperformed the baseline weapon.

In this version, you exchange weapon mobility for improved range and accuracy, although the ADS speed is the same as the default. Even though the ADS is not slow, it is still slower than other SMGs. In close-range combat, you can try using hip fire. It's worth noting that this weapon's ADS movement speed has been much boosted in this current season.

Let's compare recoil patterns next. With this BR edition, the bullet spread accuracy is greatly enhanced. The vertical recoil has also been improved marginally. This can assist you in eliminating foes from a greater distance.

The QXR can be found on the ground as Rare and Epic blueprints or as a custom weapon through Airdrops. To sum up, this is a BR-specific build with a comprehensive damage range and good accuracy. It offers superior recoil management and a greater rate of fire at the expense of weapon mobility. Overall, the QXR is the game's new meta, as it is a super-effective weapon in close-range combat. With the recent improvements, it has risen to become one of the top-tier SMGs. 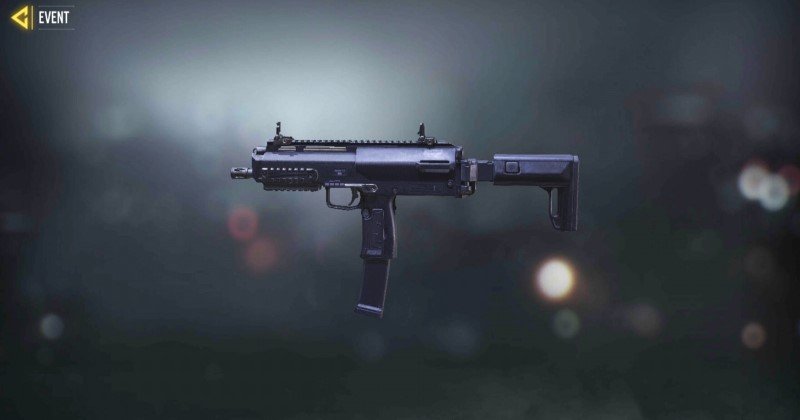 The QXR is a weapon that is highly versatile, powerful, and dangerous to use. Because of its high flexibility and agility, it is much easier to deal with close-range battles. You can survive longer in gunfights using the high-precision damage drop-off to dispatch your opponents and quickly emerge victoriously. If you enjoy playing a rapid-paced game where you can shred anyone who tries to stop you, this is the gun for you. You can also read our other weapon guides like  HOLGER, PP BIZON, FR556, AS VAL, and much more.