Call of Duty Mobile Guide to a Perfect Weapon MW11

When it comes to FPS gaming, no one can resist the charm of call of duty. And since the release of Call of Duty Mobile, this game has created another level of insanity behind it. It is the most downloaded game on mobile platforms because of the insane level of graphics it provides and the detail of weapons that no other game provides. One of the most oldest features of this game is that it lets its players tweak the gun's different components through Gunsmith Loadout. This makes the gun easier to use and deadlier on the battlefield. The game constantly updates its weapon systems to provide a never forgetting experience to its players. MW11 is one of the examples of such weapons.

MW11 has serious damage, and the accuracy of this pistol is also very nice. It is a lightweight weapon which means the mobility of the player while using this pistol is very high. Although it is a short-ranged weapon, it causes pretty good damage to the enemies. Recent updates also made this weapon overpowered. And with the right attachments, this weapon will become equal to assault rifles in some aspects. 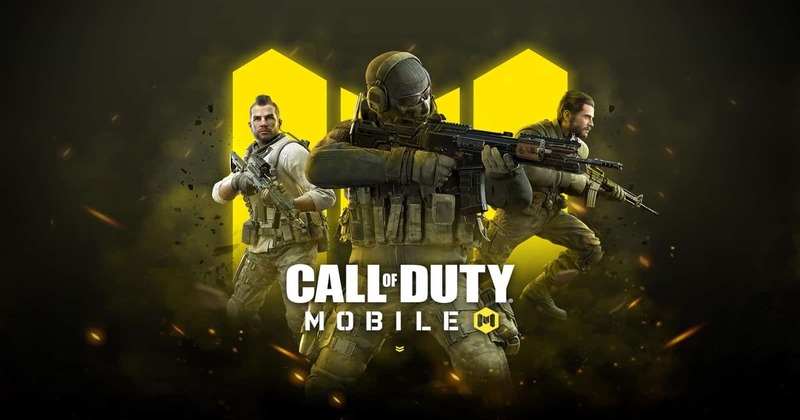 Before you select any weapon, we recommend you dig deep into the pool of knowledge and read out weapon tier list and the available guide like weapon comparison guides and gunsmith loadouts so that they may help you not just choose a weapon but also keep you ahead of every opponent.

This gun proved to be an excellent defensive weapon in Battle Royale mode due to its lightweight mobility and serious damage. Players use this pistol usually with a sniper rifle when camping as a secondary weapon to kill the enemies that are too close to the player. They usually prefer this gun over some shotguns in the absence of assault rifles.

In multiplayer mode, this weapon is also used as a secondary weapon. But players also use this pistol as a primary weapon sometimes due to its high damage and who wants to play with high-risk, high reward goals. Since the MW11 provides high mobility, players usually go with headshots to kill an enemy. The fire rate is low, so headshot is the only way to fully incapacitate the enemy before they had the chance to kill the player. This pistol is a powerful weapon in the game and can save the player's life in times of emergency.

Since MW11 is one of the best pistols, it is best to make this pistol as awesome as possible. And the game provides excellent attachments that can go with this pistol, which will not only increase the range but also increase the accuracy of MW11. And the best thing is that players can change this pistol's stats according to their liking and the strategy they are going to apply on the battlefield. Most players go with increasing the accuracy because the pistol already has short-range and high damage. The high accuracy helps in getting as many precise headshots as this pistol can provide. Here we will teach you on the best options for attachments according to their performance and the advantages they give to this fantastic weapon. 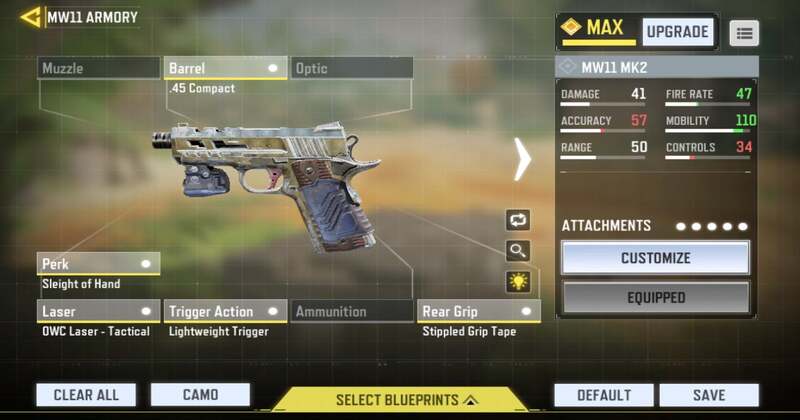 Since the muzzle helps increase the gun's accuracy, the best option is to go with MIP Light Flash Guard. This attachment not only suppresses the firelight but also improves the stability of ballistics while improving the hip-fire accuracy. However, this may reduce the ADS speed a little bit. But this attachment is the best option available because of the accuracy boost it gives to the pistol.

There are two best options available for this attachment, and the player can go with either of them according to the strategy he is going to apply for this gun. This first option is .45 Compact. It is also more popular than the other option for the barrel. This attachment will increase the movement speed and flexibility of the player. However, this will cost the player their accuracy and range. This attachment is best used in modes where the player has to face a large number of enemies at once, such as Free for All.

The other best option for this attachment is .45 Tac Long. This attachment will add stability to the gun and will also increase the firing range of the pistol. However, this will also reduce the ADS speed. This option is best for players that like headshot craziness in the game.

Since the gun is short-ranged, there is no need for the optic scope for the MW11. The best alternative to the optic is Laser. It will increase the accuracy along with other advantages. So use Laser instead of the optic.

It is best to leave this attachment unattached because it provides no strategic advantage to the pistol that is more beneficial than the other attachments.

Laser is the wisest choice to go with instead of Optic scope. The best option to go with this attachment is OWC Laser-Tactical. This is a high-power laser that will increase the accuracy of the pistol by a certain margin and will also increase the movement speed of the player. However, one negative point of using the high-powered Laser is that it is visible to the enemies. Since MW11 is already short-ranged, so it does not make a significant impact if the location of the player is revealed. As we are going for maximum accuracy, it makes sense to add this attachment to the pistol.

The best option for the rear grip is to go with Stippled Grip Tape. This attachment will give the player specific control over the gun while sprinting and increase the sprint to fire speed. Moreover, this will also increase the ADS Speed while decreasing the ADS Bullet Spread Accuracy of the gun. This is the best option and is used by most players in the game for its significant advantages.

However, if the player feels that the pistol is a little unstable for their taste, the best option is to go with Granulated Grip Tape. This attachment will stabilize the weapon by increasing the Bullet Spread Accuracy. But it will also decrease ADS movement speed. It is recommended to use the Stippled Grip Tape after having enough experience with this pistol.

Ammunition is critical on the battlefield. And since MW11 is only used when the bullets of the primary gun run out or when using the sniper rifle, the enemy comes very close. It will then become very dangerous if the pistol does not have enough bullets in it. So, for this reason, choose 15 Round Reload. This will extend the magazine capacity of MW11 up to 15 rounds. This attachment will decrease the movement speed and increase the reload time of the pistol. But players usually fire bullets quickly when the enemy suddenly appears. In that case, the extended mag will help a lot to eliminate threats quickly.

Perks are not recommended to use with the MW11 because if the player wants to use it, they have to lose an attachment, which will cause some of the stats to drop. So it is highly recommended to the left this attachment unequipped.

These are the best attachments for the MW11 that will increase this pistol's accuracy and fire rate. These attachments are tried and tested in every way, and players found these attachments to be satisfactory. Players can either go with maximizing the accuracy or fire rate of the gun because both cannot be maximized simultaneously. It is all based on how the player wants to use this pistol. 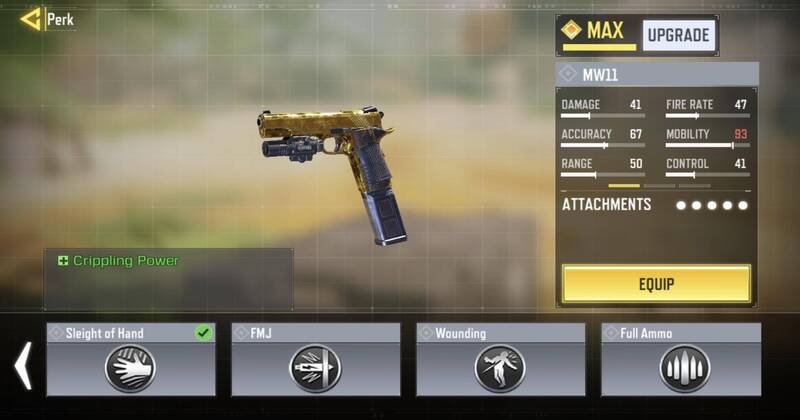 The game provides a number of skins for the MW11. The skins make the pistol a whole lot nicer when in the hands of the player or deadlier, depending on the skin the player applies to it. Some skins may be available through crates, while some can be bought directly from the store. Following is the list of all the skins for MW11 in the game. 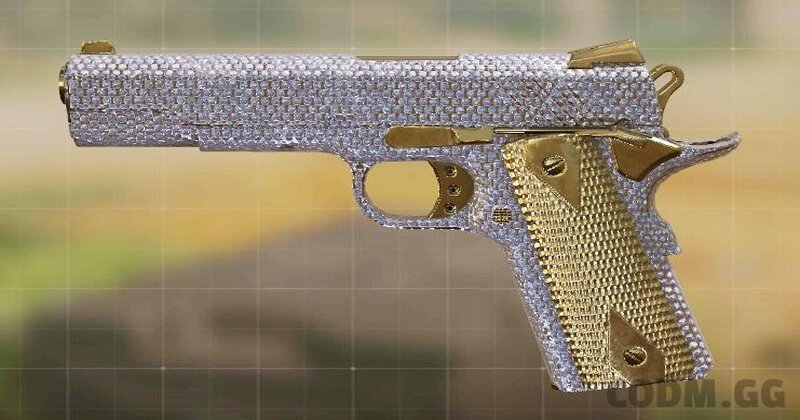 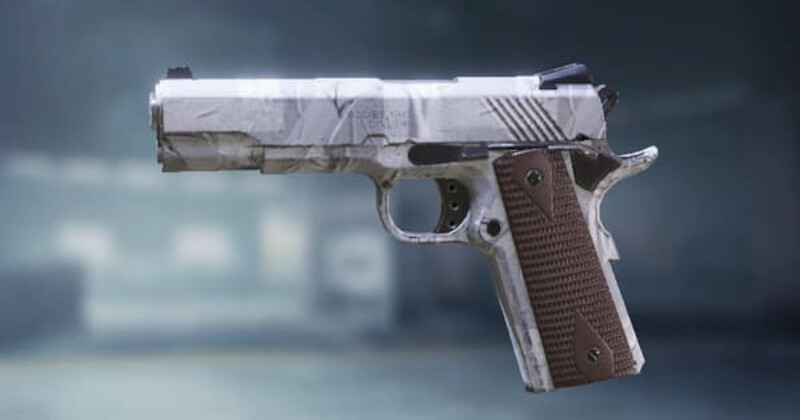 MW11 is a powerful weapon that can significantly increase the player's chances of survival. The motility it provides and some of its aspects sometimes match with that of assault rifles. And with the added advantage of mentioned attachments, this pistol can prove its value on the battlefield. Skins are also a nice touch for the pistol, and the player can choose from a number of skins that are available for this pistol. We can confidently say that MW11 is worthy of your investment.