COD Mobile is a free first-person shooter mobile game published by Activision and developed by Tencent Games. As a critically acclaimed FPS mobile game, Call of Duty Mobile necessitates advanced technique and a high-performance device. However, rather than playing it on a mobile device, many players are looking for ways to play COD Mobile on a desktop computer with a keyboard and mouse. Call Of Duty mobile can easily be played on a PC using an emulator such as LDPlayer emulator.

If you've ever played PUBG Mobile, Rules of Survival, or even COD PC, you'll understand what we're talking about. This article is intended for newcomers to the game. Even though the game is simple, some people may find it intimidating. So, without further ado, let us begin.

This CoD Mobile weapon guide will teach you about a new weapon recently introduced to the game. Holger 26, a new light machine gun launched in Season 4, is the weapon. It has low trigger pull, a good damage spectrum, and plenty of ammo, just like the other LMGs. Unlike other LMGs, it comes with two different magazines that can be converted into entirely different weapons. It is a versatile LMG that can be tailored to a variety of sizes and situations.

LMGs were recently balanced, and they now have more power in mid to long-range combat with greater precision but a worse range of motion. The Holger 26 is a one-of-a-kind LMG. It has all of the benefits of other LMGs, but it can also be used as an automatic weapon or even an SMG in close-quarter combat. With that said, let's take a look at how it compares to other famous weapons.

When equipped with the unique mag, the Holger 26 is a good LMG with low recoil, a rapid-fire rate, and excellent mobility. It comes with 100 bullets in the magazine from the start, and it fires at a rate of 707 rounds a minute. Its fire rate is at the top of the LMG scale, only noticeably weaker than the Chopper. The weapon's speedy reload time is 1.9 seconds, and it is full reload time is 3.2 seconds.

Its ADS speed is 518 milliseconds, which is typical for an LMG. This is no longer a problem for Holger, thanks to its one-of-a-kind mag. The movement speed is 6.2 meters per second, and the ADS movement speed is 2.7 meters per second, both of which are pretty slow. Compared to other LMGs, its base status seems to be quite average, but its actual performance is at the top of the class. 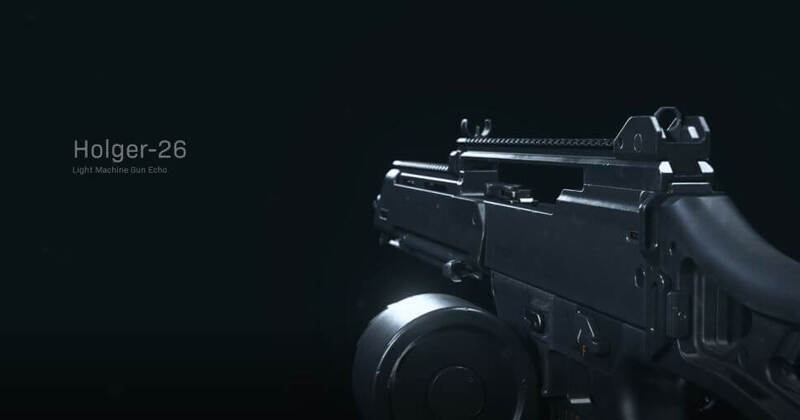 Following attachments can be used with Holger 26 to improve is accuracy, damage and perform better than its actual stats

Holger is overall a lightweight gun which can help you in sprinting as well as the mobility of the player is very easy.

The players can easily handle the gun because it reduces the flinch by approximately 60% when shot.

It has shorter sound spread distance when Sprinting or the player is in mobility phase.

Let's look at the weapon's damage and range and see how it performs about killing at different fields. Holger 26 is a versatile weapon that can be used in a variety of situations. Because of its increased fire rate, the weapon's TTK as an LMG is significantly higher than the average.

It inflicts 31 damage up to 17 meters, 25 damage between 18 and 25 meters, and 21 damage further than that. The weapon has two standard body multipliers, and a headshot deals 1.2 times the average amount of damage. The most vital point of this weapon is that it can kill with four shots from a distance of 25 meters. Its TTK in MP is pretty decent.

Weapons with higher TTK typically have less range than the Holger, while weapons with a close-range typically have lower TTK. It's a different story in Brazil. Despite the violence prevention, Holger's time to kill figure is still quite remarkable in the mid-range. Like all other LMGs, the weapon has a benefit in longer-range combat because its damage drop is not as significant as that of an SMG or AR. The only disadvantage of LMGs is their low freedom of movement, which is why, despite having a high TTK, they are not as widely known as SMGs or ARs.

The Holger, on the other hand, is equipped with two different mags that can transform it into an SMG or an AR. This is a real game-changer for the LMG. As a result, this weapon can adapt to any scenario. Holger 26's main strength is based on its high TTK and unique attachments. It's the game's new meta; it's an effective weapon with special attachments. 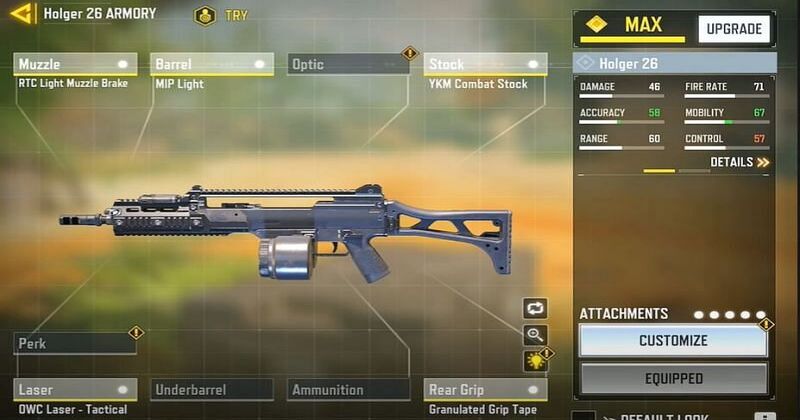 Weapon mobility is critical in multiplayer games because it determines how quickly you can kill. You will attempt to convert the Holger to an SMG to improve its close-range fighting power. The Lightweight Polymer Mag enhanced weapon mobility in all factors, making Holger the fastest LMG in the game. It is, in our opinion, a must-have attachment for MP builds.

To further enhance weapon mobility, you will use the MIP Light Barrel (Short) and No Stock. These accessories will turn the Holger into an SMG, which is incredible to use in MP. Following that, you select the Granulated Grip tape and the Tactical Laser to enhance weapon precision and ADS speed.

This is a build for maximum mobility. When compared to the default weapon, it outperformed it admirably. First and foremost, let us test the ADS speed. The ADS speed is set to 31 frames per second or 518 milliseconds. The ADS time is cut in half with this build, which is about average for SMGs. Consider using the Holger as an SMG with such a high TTK and damage range. It will be the game's deciding factor.

Let us now make comparisons between recoil patterns. The default Holger has good bullet spread accuracy and horizontal recoil flicking from right to left. Because this MP build only has 30 shots in the magazine, the vertical recoil is not as strong as the default. Even though the precision is barely enhanced, it is not difficult to control the recoil.

To summarise, this is a max movement build that offers the best mobility and harm range at the expense of mag size. It indeed dominates tight combat, with a 4-shot kill range of up to 25 meters.

The weapon damage scope is always the first problem in BR games. However, the Holger only has one attachment that increases the weapon's damage range. So, even though it only increases the damage range by 25%, the Monolithic Suppressor is the first choice for BR builds. Aside from damage range, weapon accuracy is critical in BR.

To boost weapon precision and flinch stability, use the Steady Stock. It also aids in horizontal recoil. Then select the Granulated Grip Tape and Tactical Laser to take weapon precision to the next level. If you want to use the Holger as an automatic weapon, you can finish the build with the Double Stack Mag.

This is a well-rounded BR structure. In this build, you give up weapon mobility for improved accuracy, but the ADS speed is still faster than regular LMGs, thanks to the double stack mag. Even though the ADS speed isn't too bad, it's still slower than most assault rifles. Every time try to engage the opponents from a greater distance. Let us now compare the recoil patterns.

As you can see, this BR builds significantly improves bullet spread precision. The vertical recoil is also very low, making it very easy to control. This can assist you in eliminating our opponents from a greater distance.

The Holger can be placed on the floor as Rare and Epic blueprints or as a personalized weapon from Airdrops. To summarize, this is a very well build with improved damage speed and power designed explicitly for BR. It also improves weapon movement and makes recoil control simple. Overall, the Holger is the new meta in this game, and it is a lot of fun to use. 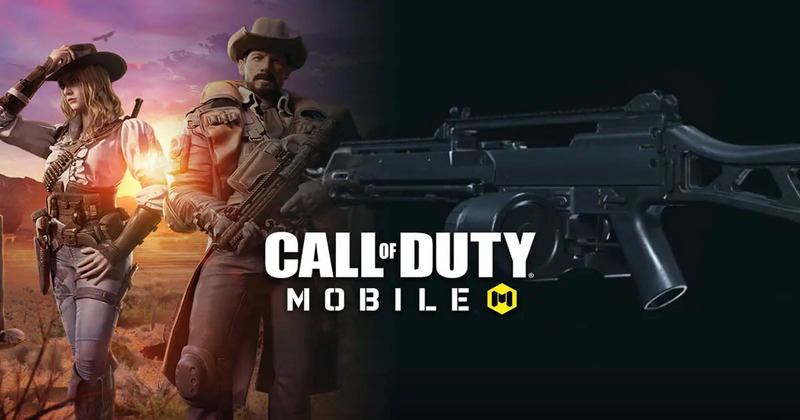 We have shared a general guide of what you can do in different modes of Holger; you can find out more on our COD mobile. You can reach out to our extensive guides on how you can adjust/customize your settings and acquire different Holger types. Except that it all depends on how you play during the game.

Choose your weapon use its compatible equipment to dominate your opponents. Adjust your settings, customize your layouts, and practice as much as possible to become one of the best Call of Duty players.

Download Call of Duty®: Mobile - Season 6: The Heat on PC