Thetan Arena is a new Multiplayer Online Battle Arena or MOBA game released by KardiaChan and WolfFun games. If you've played League of Legends, DOTA, or Heroes Strike before, you would be extremely familiar with the gameplay of Thetan Arena. The game is available now for download on Google Play Store and the App Store.

The aspect that separates Thetan Arena from any other MOBA game in the market is that it has a crypto aspect to it. Yes, you read it right, Crypto. They have their own cryptocurrency coin called THG. The company is also selling its characters as NFTs (Non - Fungible Tokens). You can earn their crypto coin while playing the game if you want to. With everything out of the way, let's look at what Thetan Arena is and who the best characters are in the game.

The basic gameplay of Thetan Arena involves PvP. You can go against players from all over the world in different modes which are available in the game. You can play on the Battle Royale mode where twelve players go against each other to be the last one standing in under four minutes. Deathmatch is a game mode in which two teams compete to defeat each other in under three minutes. Superstar mode involves collecting the most amount of points up to 50 in under four minutes.

Tower Seige involves teams defending their own towers or "Robots" while simultaneously taking down the opposing teams. When it comes to fighting in all these modes, we do need a specific set of attacks. Attacks in these games are referred to as
"Skills." Thetan Arena gives a set of skills to choose from, which do change weekly. You can choose two for the Hero that you're going to take to battle for. Skills also have their own type and rank according to their effectiveness and damage. Choose them wisely before going onto the field.

There are three kinds of Heroes available: Assassins, Tanks, and Marksmen. Assassin Heroes are the ones to attack quickly and dodge at the same time; Tanks are the melee attackers, and Marksmen are the ranged attackers. There are several heroes from each category, so let's look at them individually:

•    Raidon: Raidon is a member of the Delta Special Ops, and his job is to keep the people safe. He thinks that justice comes first, which is why he is the people of Earth's hero.
•    Mortal: Mortal, the younger brother of the Metal Outlaws gang's twin criminals, is slightly brighter than Breaker but still enjoys fighting and destroying things.
•    Rei: Joining the Saviors to protect the people of his hometown from the Government's invasion and totalitarian rule. Rei gradually becomes entangled in the never-ending battles between factions.
•    Taekwon: Taekwon is a Taekwondo master with a lofty goal of reaching the pinnacle of the martial arts world. He respects the law and the rule of law, and he is the one who is willing to shoulder all of the duties.
•    Serp: He is the Commander of the Marine Forces of South America. He knows how to flank and attack the enemy from behind.
•    El Dragon: El Dragon joins Bionic after resigning from professional Robot Boxing. Because she is one of BigPapa's minions, she is free to do whatever she wants.
•    Mary: Mary is from a forgotten nobility family and boasts assassin talents. She's also highly expert with daggers and guns, making her a serious threat to any target.
•    Velvet: Velvet was fatally injured in a skirmish with government soldiers. All of the below pieces were replaced with mechanical components by the Solar Eclipse, which saved her. She has vowed to be loyal to the Solar Eclipse since then.

•    Lucy Muffy: A thug who enjoys rock music. She constructed an electric guitar that generates sonic waves that destroy anything she dislikes.
•    Veinka: Veinka is mechanically modified and now joins the United Nations to preserve his motherland, having been recruited from the Royal British Security Force by the queen.
•    Kongkey: The Solar Eclipse's animal is the Kongkey. Kongkey is a research animal with the strength of an ape and the intelligence of a person. Kongkey will grow enraged and unrestrained once he becomes enraged. He is a very active and kind friend.
•    Breaker: Breaker is the older brother of the Metal Outlaws' twin criminals. His life philosophy is simple: "smash to enjoy."
•    Errant Ghost: Leader of The Order. He used to be a high-ranking government official, but he was discharged from the army for abusing his position of power.
•    Meiko: Meiko is a mechanically enhanced girl who enjoys building mecharobots. Meiko decided to become a savior on her own after experiencing many horrible things in the world.

•    Benjamin: Benjamin has a rebellious personality as a weapon specialist, which he exploits to cause chaos in each circumstance he finds himself in.
•    BigPapa: BigPapa, a legendary godfather from South America, depicts the underworld's dominant and superior authority. Do not even think of messing with him.
•    Morrod: Morrod, a member of the Sniper Force, is a silent killer who excels at scouting and eliminating targets from a great distance.
•    Steelshot: Steelshot, the Senior Commander of Delta Force, is a master at deploying advanced techniques, technology, and weaponry to sweep his adversaries' armies and seize their strongholds.
•    Shanna: She used to be a defender for an ancient Chinese family who was persecuted by the British government for opposing the Qing monarchy and World War II.
•    Cluster: Cluster is a highly talented ranger with a wide range of fighting abilities. BigPapa, who has the highest bounty, is his main adversary. Cluster was responsible for a slew of heinous acts, many of which were covered up by the government.
•    Phoenix: Phoenix decided to join the Nova to stop the anguish and suffering of innocent people caused by the endless disputes amongst Government parties.
•    Bathos: Bathos is an orphan who lost his family in a conflict between the government and the rebels. He has pledged to live a life of vengeance against those who have harmed him after being rescued by a rebel faction.
•    Durass: Durass is a warrior from a long-lost tribe known for its technological prowess. BigPapa exploited Durass and made him his subordinate for him to join his force.
•    Destroid: Destroid, also known as Explosive Expert, is wanted by government agencies all around the world for causing destructive explosions. After being recruited by Raidon of the Government, Errant Ghost asked him to join the Saviors.
•    Culien: Culien is an extraterrestrial creature. He has a babyish appearance but a chaotic and devious mind underneath.

This is the official tier list of characters from worst to best- S being the best and D being the worst. It should be noted that this list was compiled in December 2021 and is subject to change at any time. 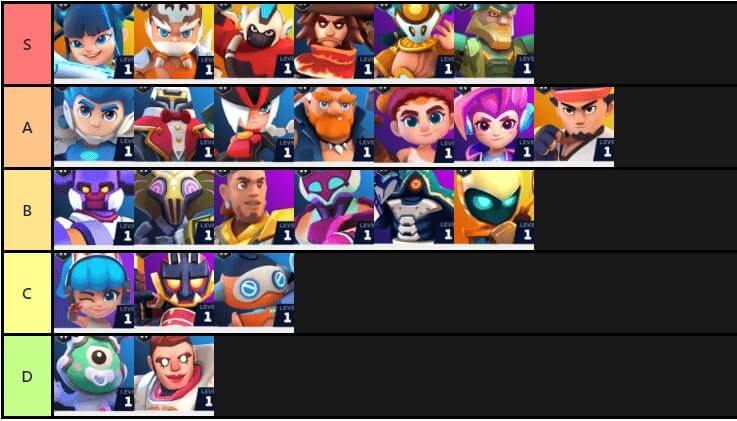 Personally, I love playing with Tank characters since, in every game, I prefer using a melee stance over any other. That's why having a different gameplay experience with every character makes this game a lot more fun. You don't really need the strongest of the characters to have fun in the game. Apart from just characters, there are tons more to explore in the game like guilds, the store, tournaments, leaderboards and so much more. I would absolutely recommend that you check it out. Happy Gaming!