The Genshin Impact 2.3 Update is available right now for the players to play and the new event is already started. The 2.3 update brought two reruns- Albedo and Eula with Itto and Gorou appearing on the latter half of the update. Even though players are enthusiastic about this update, some are looking forward to the next one and the characters that will be introduced. We have all the details you need to know about the 2.4 upgrade, whether it's just out of curiosity or as a method to preserve your primogems for future characters.

Upcoming speculated banners for the 2.4 version

There hasn't been confirmation about the rerun banners yet. Some have speculated for there to be Ganyu and Xiao coming together as the first banners in the 2.4 version. It could likely happen. There have also been talks of there being three rerun banners: Ganyu, Xiao, and Zhongli; either all together or Zhongli will run alongside Shenhe on the second banner.

Speaking of Shenhe, she was actually "leaked" by the official Genshin Twitter account. This isn't new from them since they've done that before with Thoma, Itto, and Gorou. Players now refer to it as Genshin's drip marketing. Let's learn more about the upcoming characters. Shenhe is an upcoming 5-star Polearm user with Cryo vision. She is descended from an exorcist clan's branch line. She is descended from an exorcist clan's branch family. Shenhe is a fierce individual who is easily enraged; according to Cloud Retainer, when her temper gets the best of her, she obliterates her surroundings. Xingqiu is suspicious of him around her, giving him a "ferocious" stare and wondering if he has upset her or someone close to her. In terms of gameplay, leakers have deemed her to be a sub-DPS character. Once we know more about it, we will update you. Yun jin is a new 4-star Polearm character with a Geo vision. She is the director of the Yun-Han Opera Troupe and a well-known character in the opera scene in Liyue Harbor. Fan Er'ye, the owner of Heyu Tea House has also stated that one performance from Yun jin makes them enough Mora to remain closed for the entire month. We don't have much information regarding the gameplay right now, but as soon as we do, we'll let you know.

Players were surprised with them both being Polearm since there have a lot of polearm characters being released by mihoyo. Even they realized that and referred to Genshin Impact as "Polearm Impact".

Ethereal Soul Amidst the Mortal Realm

Shenhe comes from a branch family of a clan of exorcists. Due to certain reasons, Cloud Retainer took her in as a disciple.

To Shenhe, Cloud Retainer is a knowledgeable and chatty master.#GenshinImpact pic.twitter.com/OrjpVCqmkD There's a new addition to the Inazuma island called Enkanomiya. Several fans were astonished to find that she would be introduced before The Chasm. Even though it is a part of Inazuma, it would possibly be displayed on a separate map like Golden Apple Archipelago but the difference is that it will be permanent. Enkanomiya can be switched between its two phases, Evernight and Whitenight, at will, according to Project Celestia tweets, altering the surroundings.

Enkanomiya will feature an alternating time cycle between Evernight and Whitenight that reveals different appearances of environments and mechanisms. There are a total of 9 subareas in Enkanomiya.

Enkanomiya has been mentioned several times in Inazuma's world missions and items, hinting that the location will be explored at some point. The folklore around Enkanomiya is intriguing, and it exposes a lot about the history of Watatsumi island and Inazuma in Genshin Impact, so it'll be exciting to explore this place in the upcoming update. People are wondering how many more islands Inazuma will have but some are just excited for the exploration primogems that we will get. 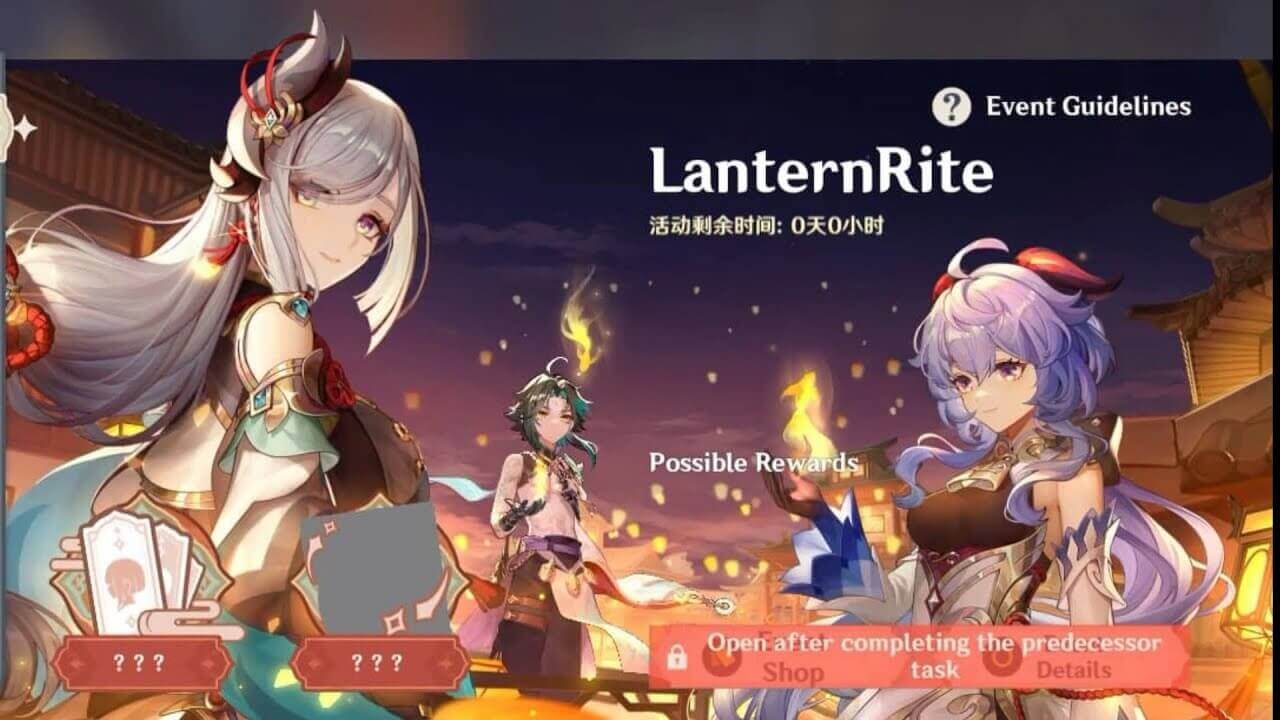 There have been several events that the data miners and leakers have come out about. It is not confirmed yet but we can be almost 99% sure that these will occur during the 2.4 version.

Lantern Rite Part 2 is speculated to make a return in the 2.4 version of Genshin Impact. The previous lantern rite had mixed reviews, people thought it was full of just talking and not much of gameplay, while the Stand by Me and Daily Login event aspect of it was good. Stand By Me, for the ones who haven't played it before, is a part of the event was at the end where you get a select one free 4-star character. As for the minigames, there have been leaks about two. One is called "Wondrous Shadows" where you must change a lantern's light and shadow to create a specific image. The second one is called "Fleeting Colors in Flight", where it will reward us with a free 4-star (just like Stand by Me) and a Ningguang skin. Keqing skin is also coming to the game, but it might just be a pay-to-obtain one, like the Jean skin.

The beloved Windtrace event comes back after its first appearance in the 1.5 version. Players will be divided into two groups: the Rebels, members of the ancient resistance, and a Hunter sent by the ancient aristocrats, who will face off in the Contested Zones in a battle of wits. The Hunter's mission is to apprehend all Rebels, while the Rebels must continually move and hide in order to dodge the Hunter until the threat has passed. Leakers have also revealed new locations that the Windtrace event will be held.

Two more events, "Over Mountains and Seas" the story quest for Enkanomiya, and "A Study in Potions" is also coming to the game. There hasn't been more information about either. As for weapons, with a 5-star comes their BiS weapon. Just like that, Shenhe has her weapon coming called "Calamity Queller" is coming on the weapon banner alongside her banner. It is going to be a Polearm with Attack % as its sub-stat. It increases elemental damage by 12% and increases attack by 3.9 percent for every second after using the elemental skill. If the character exits the field, the effect is multiplied by two.

Ningguang and Yun jin are appeared to get their own hangout events. There will also be a story quest for Shenhe available in the next update. A very interesting update is also of new reactions, called as Overgrow and Overdose to be potentially added to the game.

All of the information mentioned is always subject to change, it is not all confirmed yet. Even if it is not, there is a lot of content for Genshin Players to look for. Till now, we can enjoy the current update and the upcoming characters: Itto and Gorou and events. Happy Gaming!