Tears of Themis: The Hand that Feeds Chapter 1 Guide

Tears of Themis is here with an English release included with some handsome boys hidden with their mysterious history. miHoYO managed to introduce this game with a detective theme to catch up with the gamer's mind, and there is a behind story in here other than dating these super handsome boys. You need to find and reveal their secrets and mysteries. Each character in this game has their own hidden mysterious story, and they are different from one to another. And all of these characters are having something to reveal. The Player's main task is to expose these secretes with the gameplay, and as a sub bonus, a romance is added within the storyline. Who wouldn't like to date unique yet mysterious boys?

You don't see a complicated structure behind this game, and there are helpful tutorials with Tears of Themis to being useful for the players on doing tasks they need. After the follow-up of the tutorial, players will be enabled to get with the first episode of the game. And this first episode  is the guide we talk in here. Let's download Tears of Themis on PC and head over into the Chapter 1, "The Hand that Feeds" guide from here. In this episode, players are tasked with defending an old restaurant owner. This owner has been sued for a crime, and he was suspected of poisoning his customers. There was a suspect that he is making his customers poisoning. But this is not totally the truth, and this owner is innocent and already being framed. Through the spread of this episode, the game provides several crumbs and the bits within the game on truth until the final episode starts on this chapter. In the final episode, there will be an occurring court session.

Before starting the court session, the game is usually testing the players on everything they have to perform. These include looking for objects within a room where it may save the restaurant owner from the misconception. When it is the court session, players have to be presented with their founded evidence gathered by observations within their previous stages.

Evidence to be presented at the Court

For evidence one, players have to choose the receipt of Insecticide, and they have to be presented with the receipt fingerprints on to the judge so that the players will be able to prove that Pedro has bought that Insecticide.

For evidence one, you need to choose the video of door surveillance. This is to prove that Pedro went into that restaurant at the exact time where poisoning has occurred.

For the evidence, it has to be the water dispenser choose by you. This is a proof item on Pedro, who has poisoned the water. Before you reach into the trial and expose your culprits on this case, you have to be careful to learn this case with more details. There are so many inspections, and the dialogues happen here to get these details advanced with you. Players have to start unraveling the evidence, and those are really helpful to free the innocent kitchen owner. It is releasing an innocent from the wrong suspect and solving the mystery that happens here.

Players can be interrogated with the witnesses in this case and search for the crime scenes here. And also, they are capable of finding the not subtle connections between the items they see, resulting in irrefutable shreds of evidence to be presented at the court. The last mechanics to be performed here is the find connections.

You must find the connections between the shreds of evidence, items, and other things you find here and then present an item analysis to them. So there are few items we see here that are connected with the tasks to make them more accessible.

Beginner's guide for the path on Tears of Themis can be viewed from here. 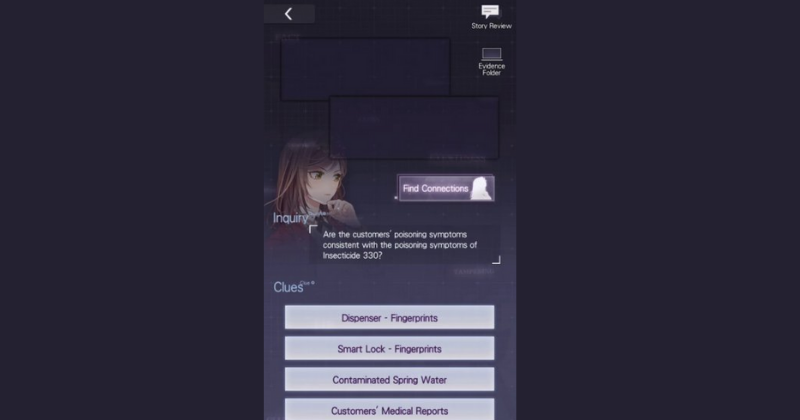 No problem if you do not need to stay; you can skill the parts onto the court and head over to the evidence. But before you are reaching the showdown, you need to piece several things together on the game.

This chapter 1 analysis is a mini-game, and it will not be too taking; you got some infinite retries in here, and it will quickly start than you imagine. And also, players will get complicated with this chapter only when it is the last chapter. These are the items that you need to find those connections within the feed hand.

This inquiry has to be done with Pedro's motive, and it has to be established before we are considering him as a suspect in this incident. Use the performance pressure of Pedro to the failed hard sell and find whether Pedro already contaminated the water within the time frame of established. Do it with Vernon's Testimony or by concerning Pedro's entry and the exit times.

Then consider how to prove that Pedro was within the possession of Insecticide. And then you need to find what has been utilized with the crime. You can ongoing with this inquiry by concerning the receipt from purchaser information and by referring to the records of the financial support on Pedro.

So here marks the end of our chapter 1, The Hand that Feeds guide, and it is your duty to solve the mystery by taking down the lies of the suspect regarding the restaurant owner. He doesn't own this faith as a culprit, and it is your duty to give justice to him and find the real culprit of the incident. Gather the evidence, launch the inquiries as we mentioned, and find out the real person behind this poisoning matter.