In Stumble Guys, Not every map is easy, and you can't use the same strategy to win them, but there are a few common tricks like using the double jump to reach distance landing spots and using emotes to your advantage. We will show how you can incorporate tricks to get qualified quickly. Now you can play Stumble Guys on PC to beat these maps in advance with LDPlayer 9.

So without any more delays, let's start Stumble Guys: the ultimate map guide. 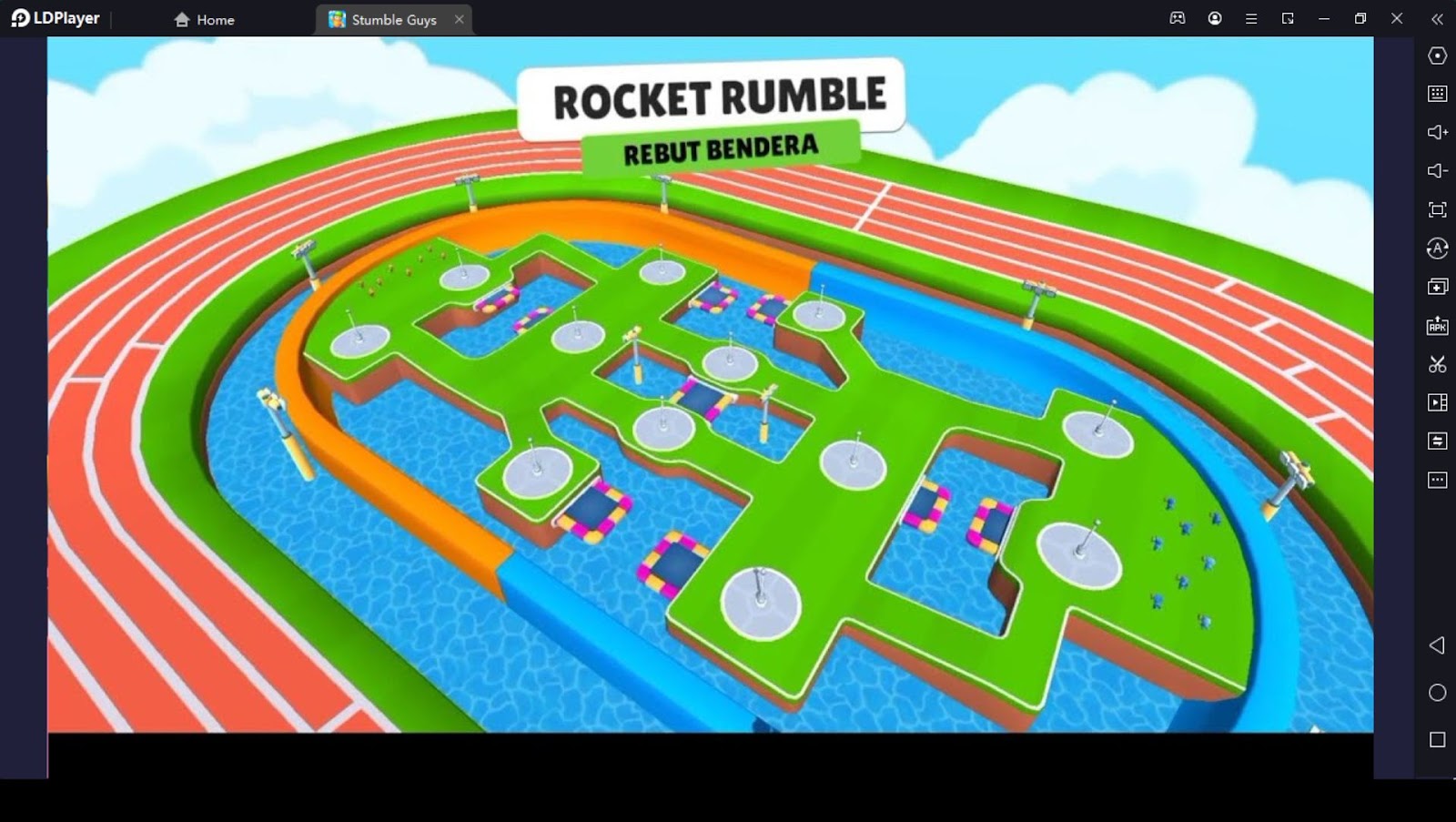 In this Stumble Guys map, you will see Blue and Yellow teams compete against each other. The map is an arena with several flag posts, several tight corridors, and some bounce pads. To win, you must first reach and seize control of the flag posts and fend off your opponents. Holding onto your flags for a longer period will reward you with more points. At the end of the allotted period, the team with the most points wins.

How to Beat the Rocket Rumble?

To win, you don't always have to stand under the flags; you can instead go to the trampoline in the middle and jump and shoot all the flag positions while spinning. This way, your teammates can capture the flags easily.

If you are playing Stumble Guys with a friend, you can go for the flags in the other team's spawn area when the timer hits 50 seconds. If you use this tick, you can keep other teams' attention on the two flags you are capturing more than other flags on the map. This way, your team members will be able to capture flags on different parts of the map. 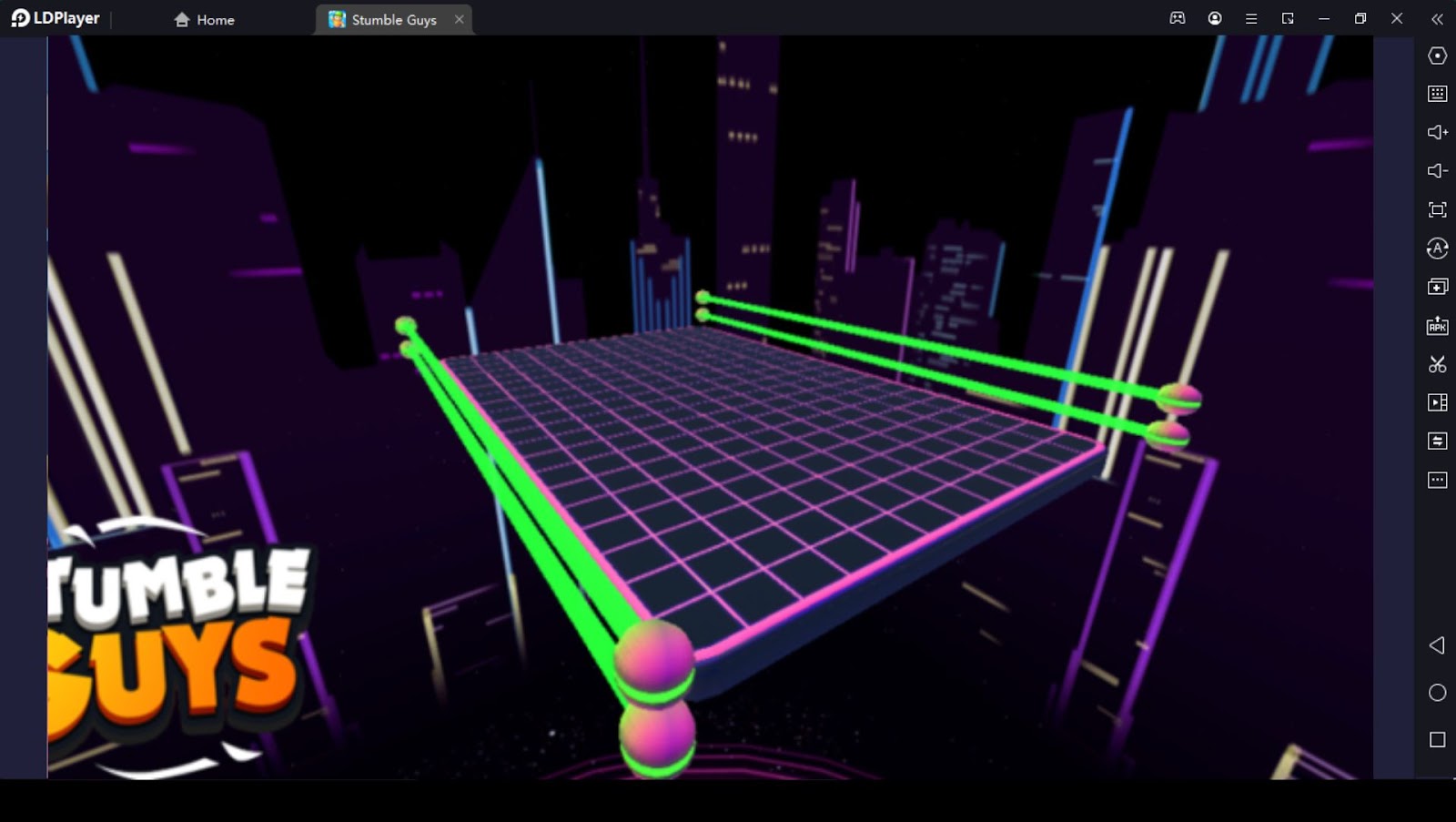 Everyone starts on a small, square platform on the Block Dash Stumble Guys map. From the top of the level, groups of blocks will flow down, and you'll have to jump over them to stay alive. If you don't avoid these, you'll fall into nothing and lose the game right away. Be aware that you may be able to hop over some block formations, but others will be much higher and have no platforms to support them, forcing you to jump and dive through the darker, weaker blocks to break them and get through.

How to Avoid the Block Dash?

To avoid the walls, you need to break through them. To do this easily, quickly go back and charge the walls; when you feel your speed is increasing, you can jump. You will be able to go through the walls without a problem. 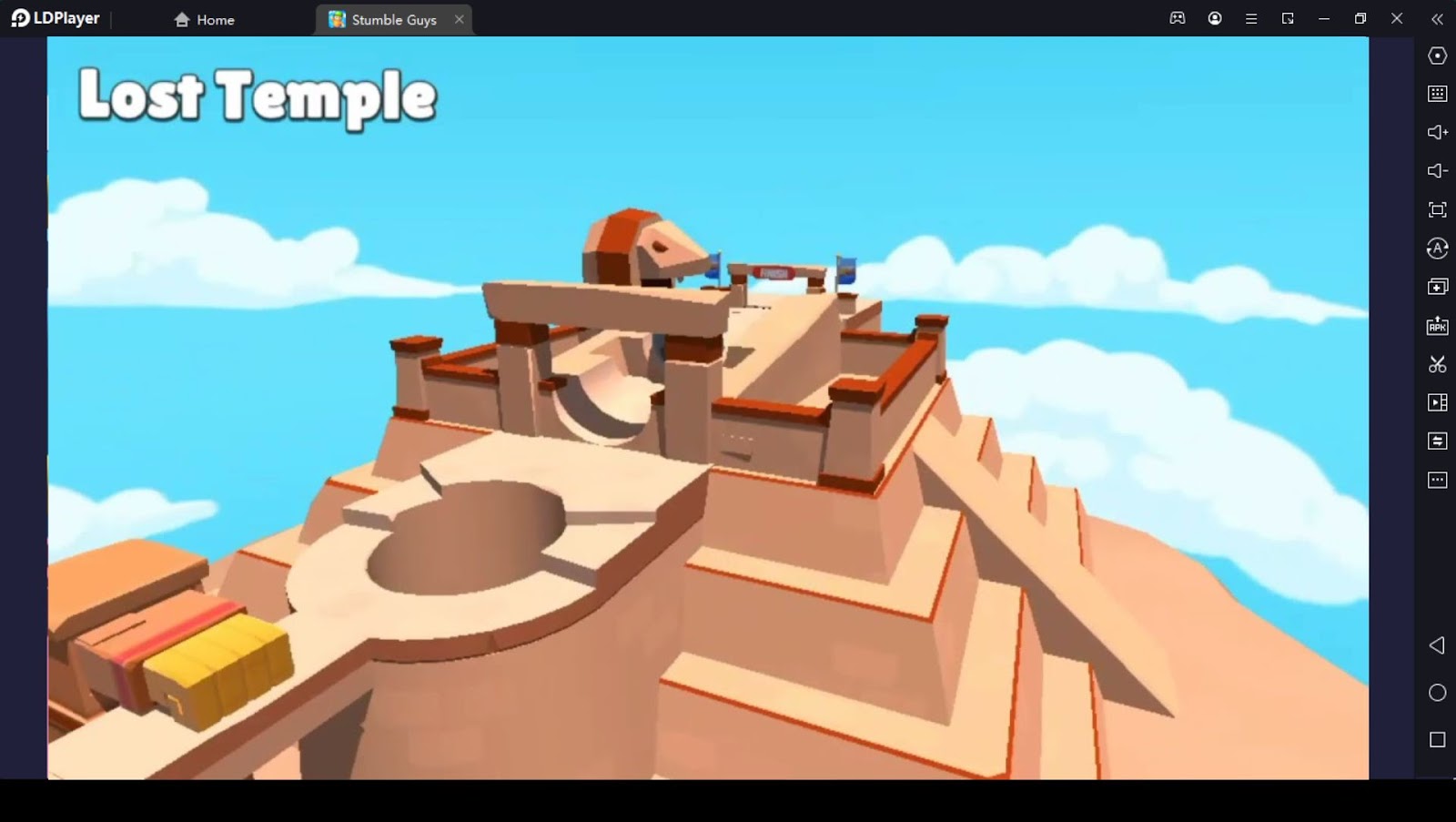 This Stumble Guys map is a dangerous maze with deadly traps like knives that cut falling logs, sharp spears, and falling rocks. This map may be a tribute to the old Indiana Jones movies and the dangers that Jones faced on his archeological quests. Initially, the course has two main paths, but there are no rules against using any other routes; you only have to cross the finish line somehow.

How to Prevent the Deadly Traps in Lost Temple?

If you come from the right side path, you can cross to the other side, where the left side path has four pillars that have spikes coming out of them. You can use that diagonal path all the way to the next area. But before jumping, see if the spikes are up or down; only cross if the spikes are down. This is a very fast route.

If you go on the left side of this Stumble Guys map, as soon as you climb the platform that has spick all the way to the end, you can climb the wall at the start and then walk along that wall to avoid all the spick. 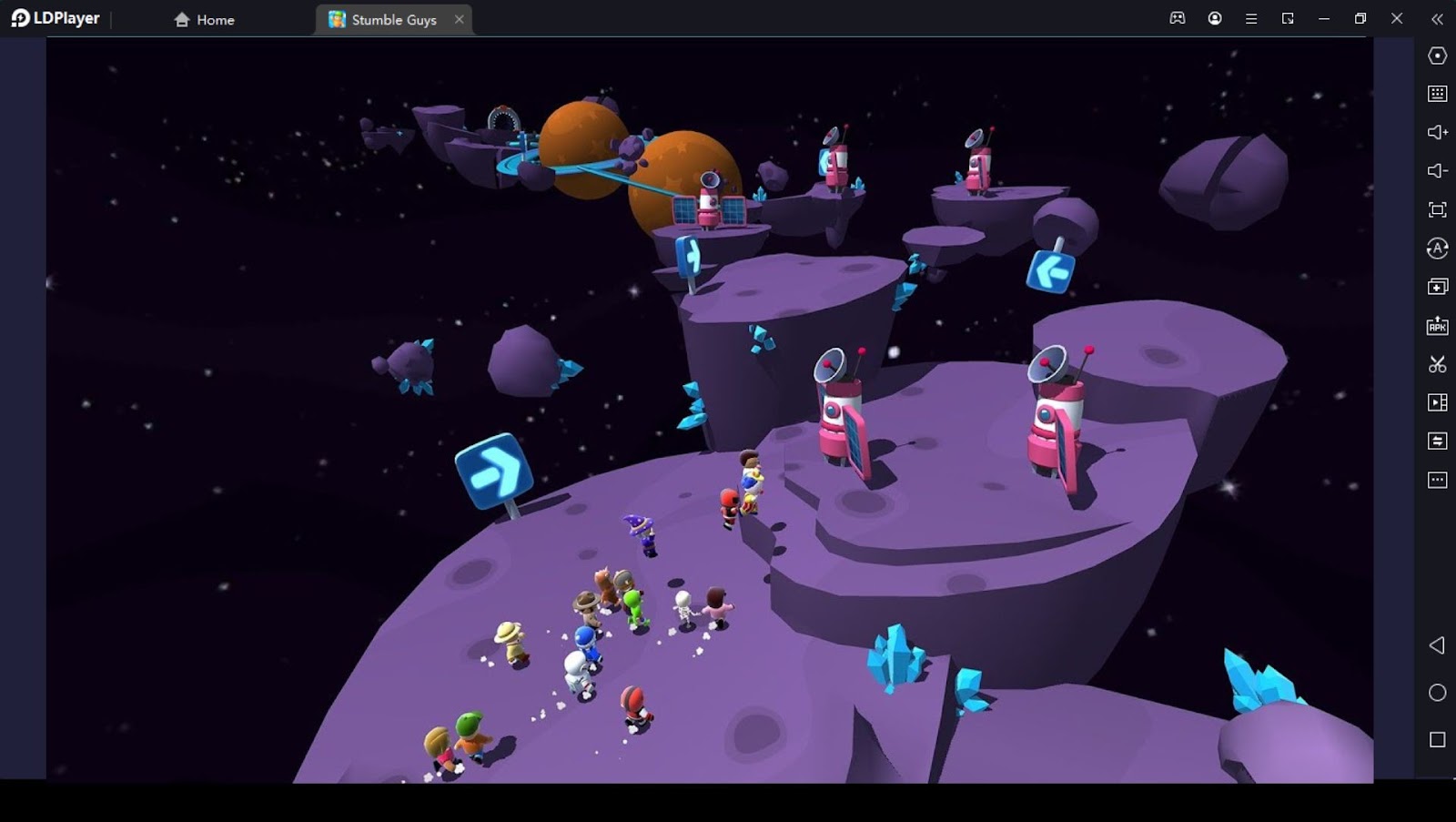 This Stumble Guys map is pretty similar to the others we've talked about so far in terms of the type of event it would host, which is an obstacle course, except that the gravity is very low. This is a one-of-a-kind map because it changes how the game works; you can jump higher and farther on this map. The strange art direction and "space" theme of this map make its many traps and long jumps look more complicated than they are.

The first trick is to get hit by the first satellite you meet while jumping to get to the Saturn ring faster or climbing to the right side satellite at the same place and jumping to shorten the distance, but there is another trick you can follow that is faster than the both of those.

You have to ignore and go between those satellites, and you will see a floating ground jump there and jump directly at the middle satellite you see next; you have to avoid getting hit by that satellite for this to work. Then jump up at the edge of the satellite ground while pressing moving forward; when you are halfway to the next landing zone, use the double jump to get the boost you need.

Another shortcut is climbing over Saturn. You can do that by double jumping continually until you reach the top, then jump to the next landing place with the waypoint on it; then, you can climb to the next planet's ring and move on the usual path.

Before you jump into the last space line, try to see if someone is crossing to the other side between the tubs. If they are coming from left to middle, then the finish line is at the right or middle and vice versa. 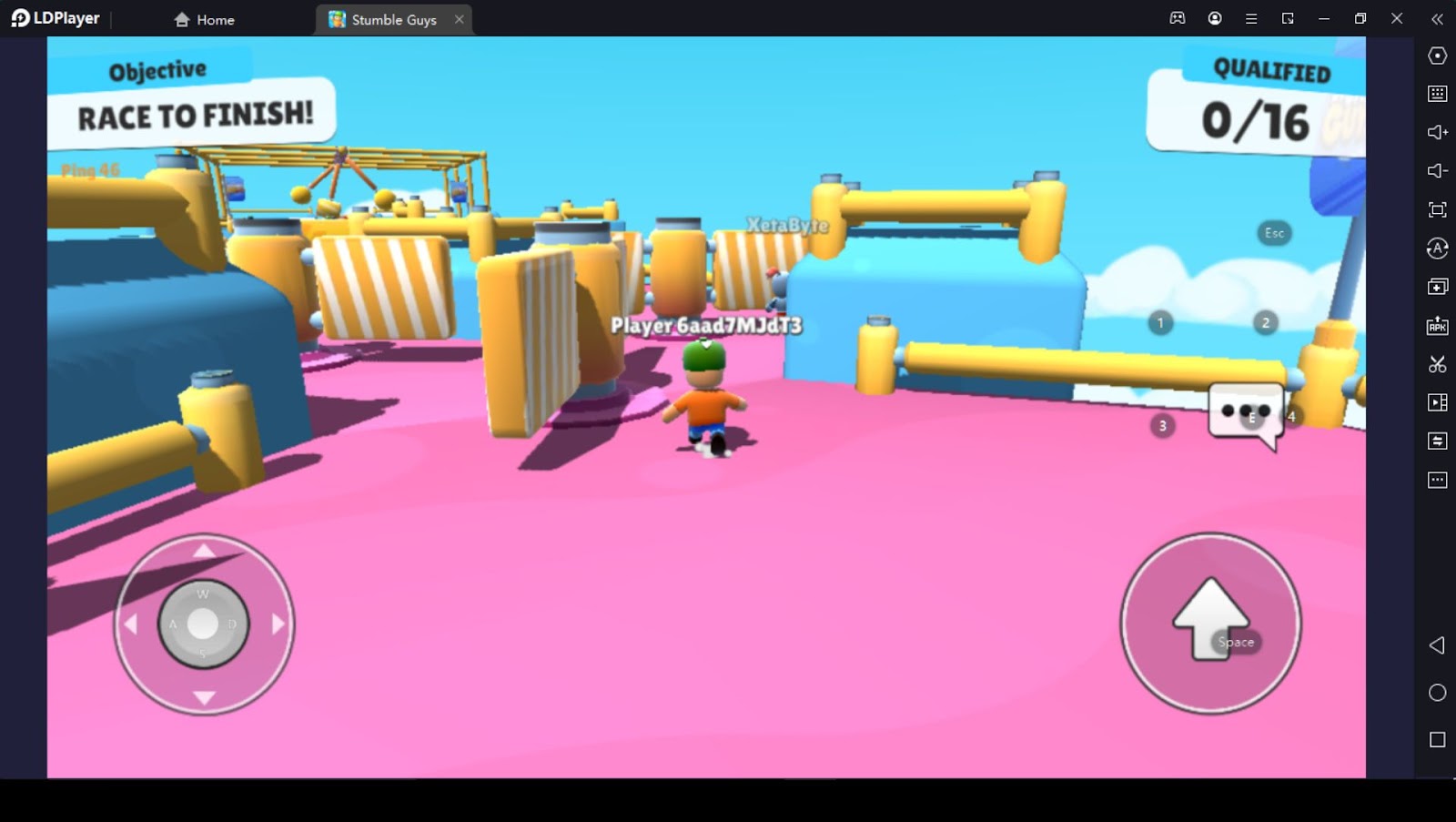 At first glance, Pivot Push looks like any other obstacle course. It has a few obstacles that move around, and players have to push them out of the way to move on. Its final climb and several obstacles along the way make it the most skill-intensive obstacle course in the game.

How to Avoid the Pivot Push?

There are three moving boxes to navigate before reaching the platform with the swinging hammers. If you're quite a ways out and you can see that one of them is rising, you shouldn't pick it to climb because it will already be at the top by the time you get there. Get yourself quickly to the one that's almost collapsed.

If you want to avoid getting hit by the hammers swinging left to right, you should go along the left or right edge of the hammer swinging platform; if you go along that edge, hammers will not hit you. 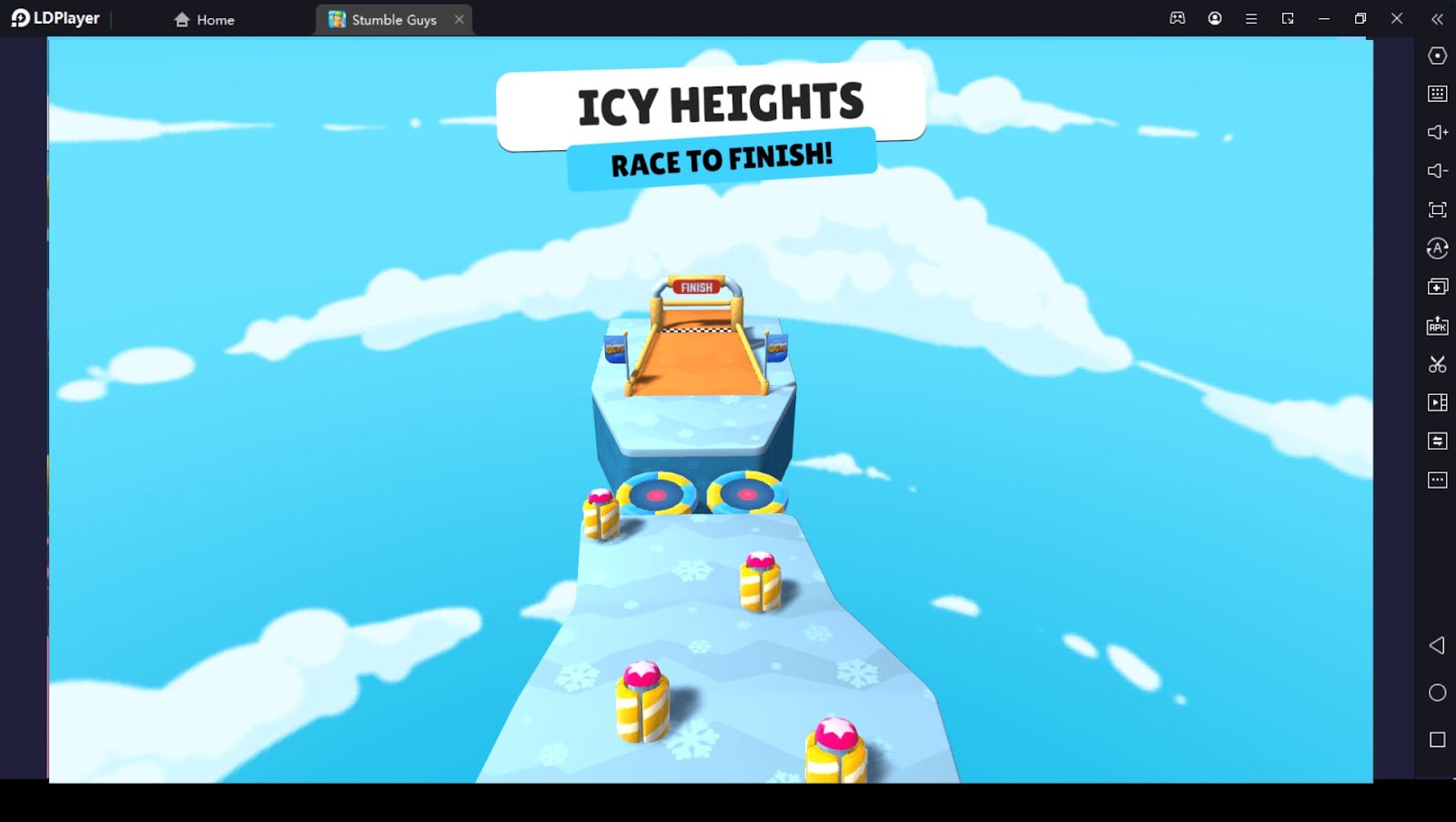 On the Icy Heights map, slippery surfaces make it harder to control your movement, change directions, and jump at the right time. You can stop yourself from going off the edge, but other players' impatience will cause them to bump into you all the time, making it more likely that you will go off the edge.

You can use the starting area railing to jump onto the first trampoline and use a double jump while moving forward to go to the next railing; after that, you can move in the usual route. This helps you to avoid the most challenging place on the map. 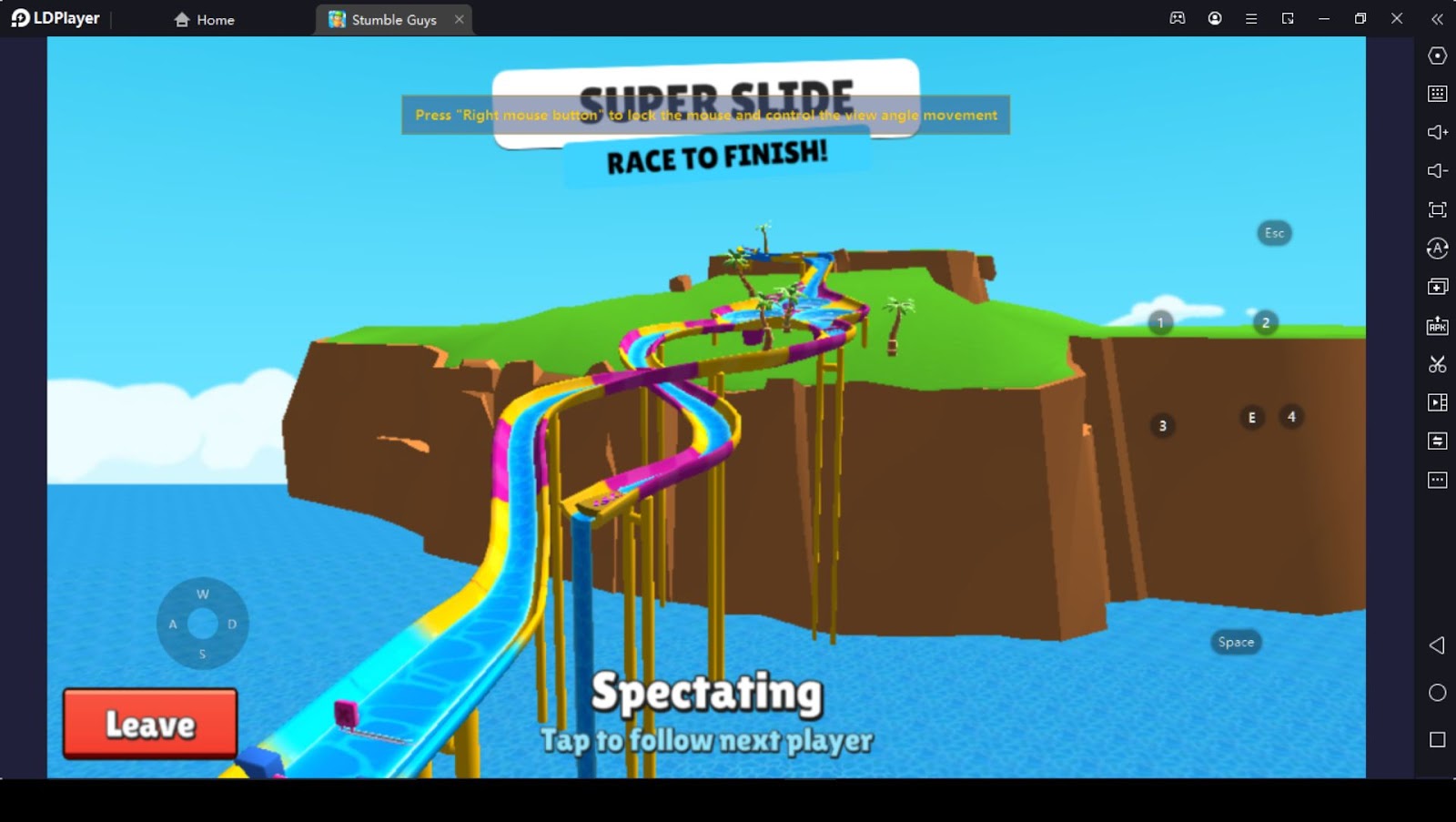 This obstacle course is fun; the race to the finish line is fierce, as usual. The main thing that makes Super Slide different is that, as the name suggests, you are basically stuck careening down a long water slide, with no chance to stop and line up your jumps correctly. Timing is essential in this situation because it affects how well you can avoid obstacles and how fast you can move across the map.

At the start of the map, you can go back a little and start pressing double jump every time you hit the floor to go faster. 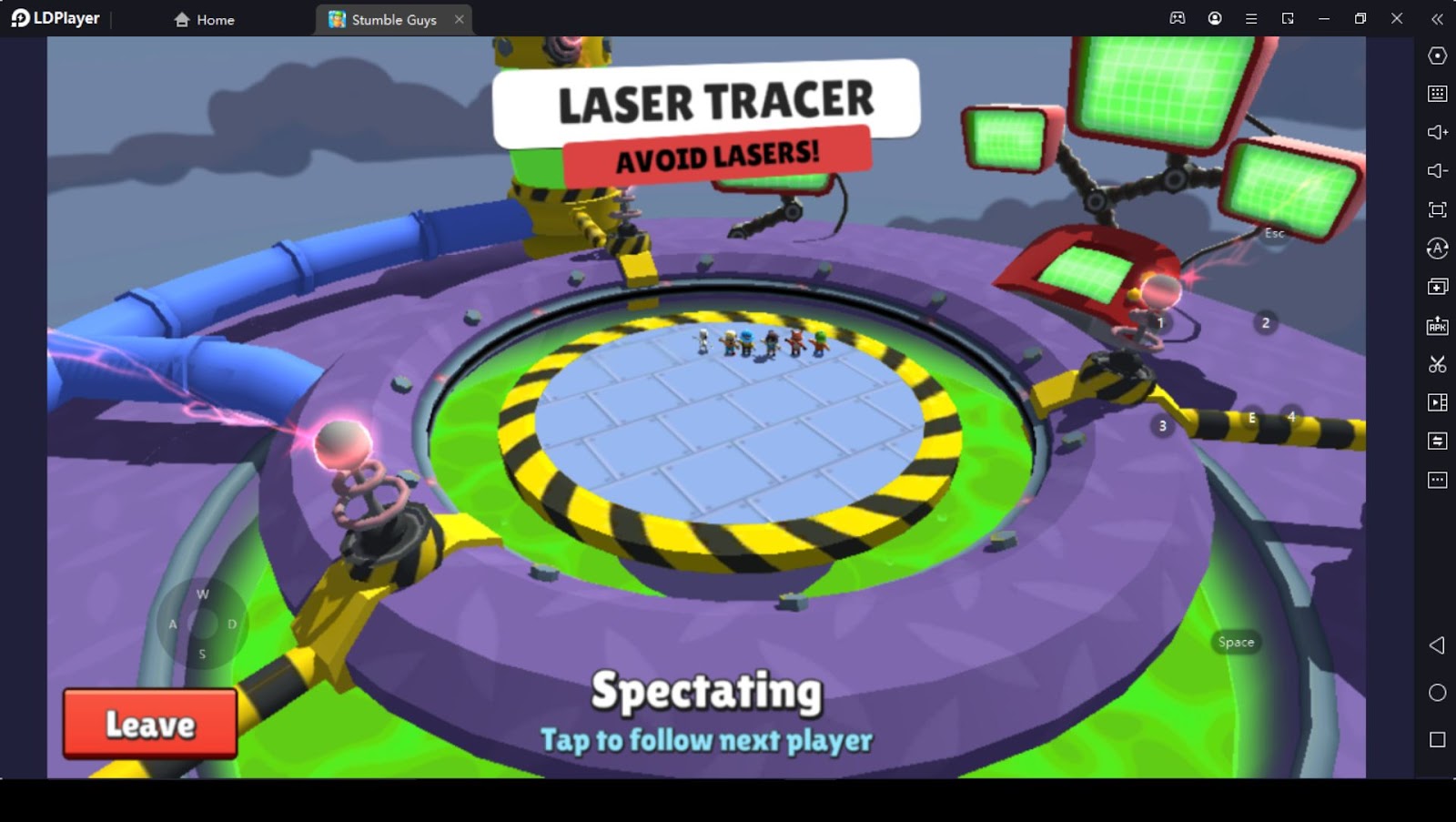 The second most challenging thing in the Stumble Guys, after Block Dash, is this map because any contact with the lasers ends the game immediately. In Laser Tracers, lasers that move in sweeping patterns across the field attack all of the people in a round arena. When a laser beam hits someone, they quickly turn to vapor and are, as you might expect, out of the game. You can easily avoid the lasers, but other players will keep bumping and jumping onto you, which could kill you quickly.

How to Prevent Lasers and Beat the Map?

To avoid the lasers, use the kick emote when the lesser is about to hit you. This will save you from the laser; if you have difficulty doing this manually, you can use LDPlayer Macro Commands to do it quickly; check out our How to Play Stumble Guys with LDPlayer 9 guide.

To perform all these tricks, you need better control and an easier way of performing actions with a single button press because timing is a critical factor for some of these tricks. If you play Stumble Guys with LDPlayer 9, you can improve the Stumble Guys on PC gameplay control with your keyboard and mouse thanks to the Keyboard Mapping feature.

You can perform actions like double jumping and using emotes while jumping with a single button using the Keyboard Macro Command feature; to learn more, follow our How to Play Stumble Guys with LDPlayer 9.

This is the end of our Stumble Guys: The Ultimate map guide,how to win every match, part two. If you haven't checked out our Stumble Guys: The Ultimate Map Guide, How to Win Every Match part one for other maps, We have discussed many tricks for you to follow with these two guides. Credit for all these cool tricks should go to the Detroit YT YouTube channel. We appreciate your taking the time to read; we hope they prove helpful.