Stumble Guys is a game similar to the PC game fall guys, but it has its own unique play style. The main difference here is stumbling Stumble Guys is purely for mobile. With Stumble Guys, the ultimate map guide, we will explore the maps in the game and show you some easy tricks to win every match.

Knowing these tips will not help you if you can't control the game effectively; you have to make rapid movements to do these tricks and survive. So, we also advise you to just move on to Stumble Guys on PC as well. And let's now start the beating tips. 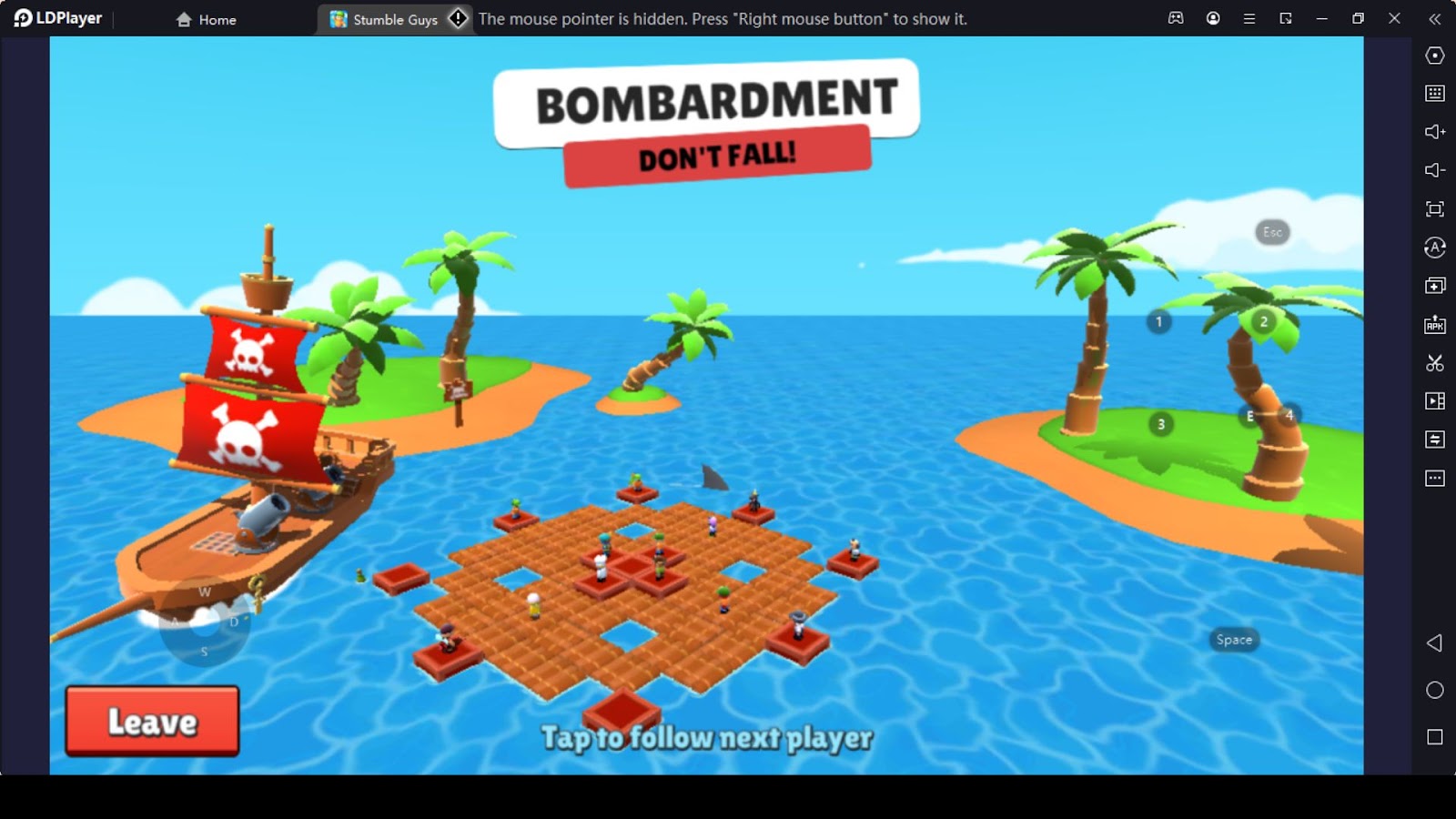 Despite being a survival map, this Stumble Guys map has no mysteriously vanishing platforms. Here you will meet a pirate ship out in the distance that fires cannonballs at the area, gradually destroying the platforms until they explode and disappear, sending any adjacent players flying. As the round proceeds, fewer and fewer platforms will remain.

How to be Fluent on Bombardement?

Since the ship always fires its bombs toward the side it is on; you need first make sure the ship is on the other side of the platform from where you are standing.

You can use the heart emote to hug players; using this trick; you can hug and drop other players into the water.

If you don't have punch or hug emotes, you can push the bombs to the place other players are to get the maximum output; try to push it to a place with more than two players. If you get hit by a bomb, you can use the punch emote to land easily. 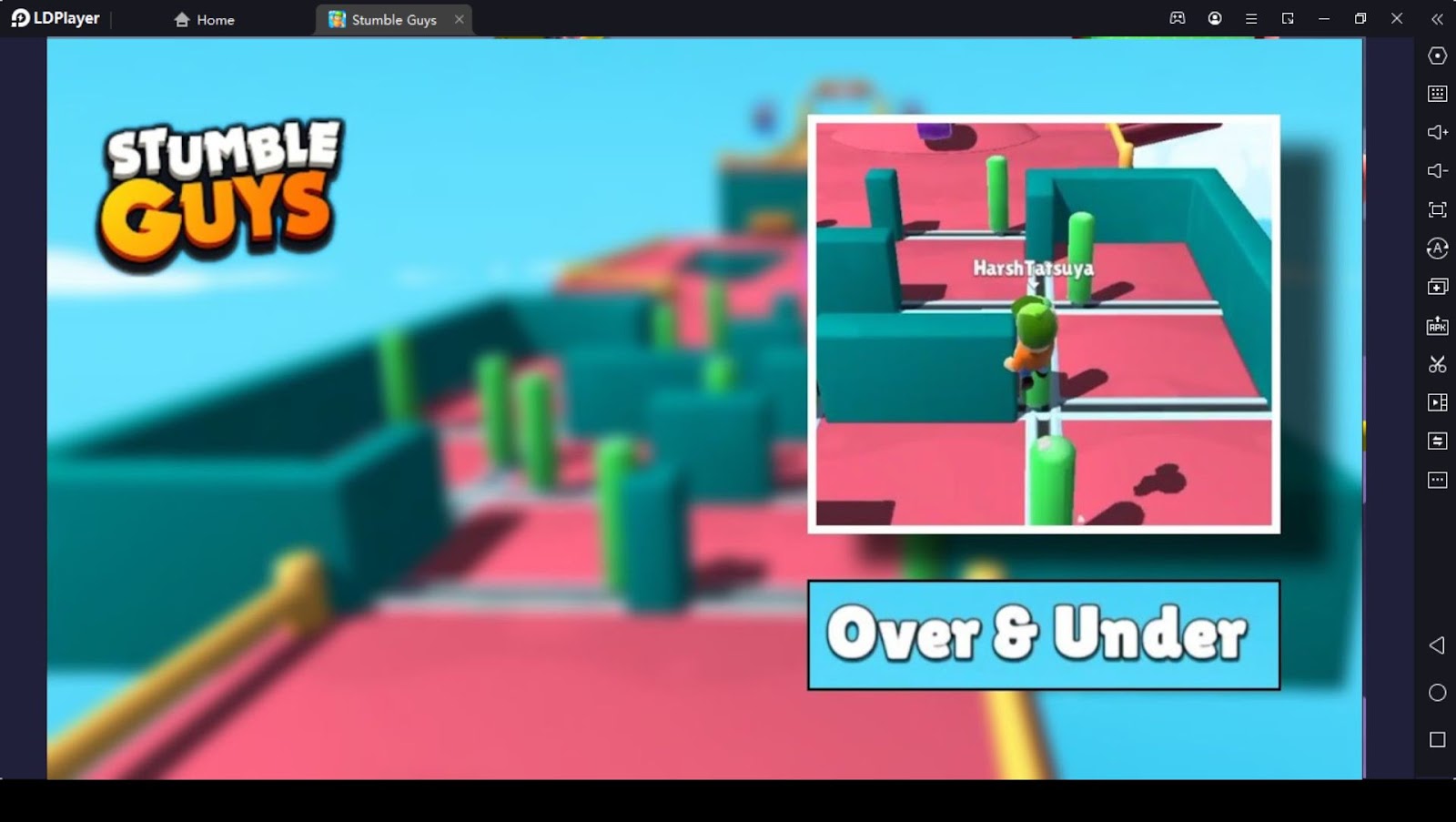 This is one of the most straightforward and simplistic maps in the current roster of Stumble Guys. This is essentially a timed obstacle course where the objective is to complete the course first. However, as its name suggests, this route map centers on hazards that must be overcome by climbing over or tunneling under them. In particular, the first portion has several annoyingly bouncing horizontal bars that need precise timing in order to run beneath or leap over them.

Beat Over and Under

At the start of this map, you meet a part where you have to jump from trampoline to trampoline; you can avoid this if you jump only on the bars that connect them.

You will also meet obstacles going up and down quickly; you can go under them using a kick emote. You can avoid the maze with moving sticks by sticking to the left or right wall when you play this map.

When you get to the four sliding cubes, most of the guys always get hit by the four cubes sliding left to right. To avoid this, wait until one of the first two goes outside, and then you need to walk in; then, when it is about to come, jump to the right side of the second moving cube, and you have to move from there as fast as you can. 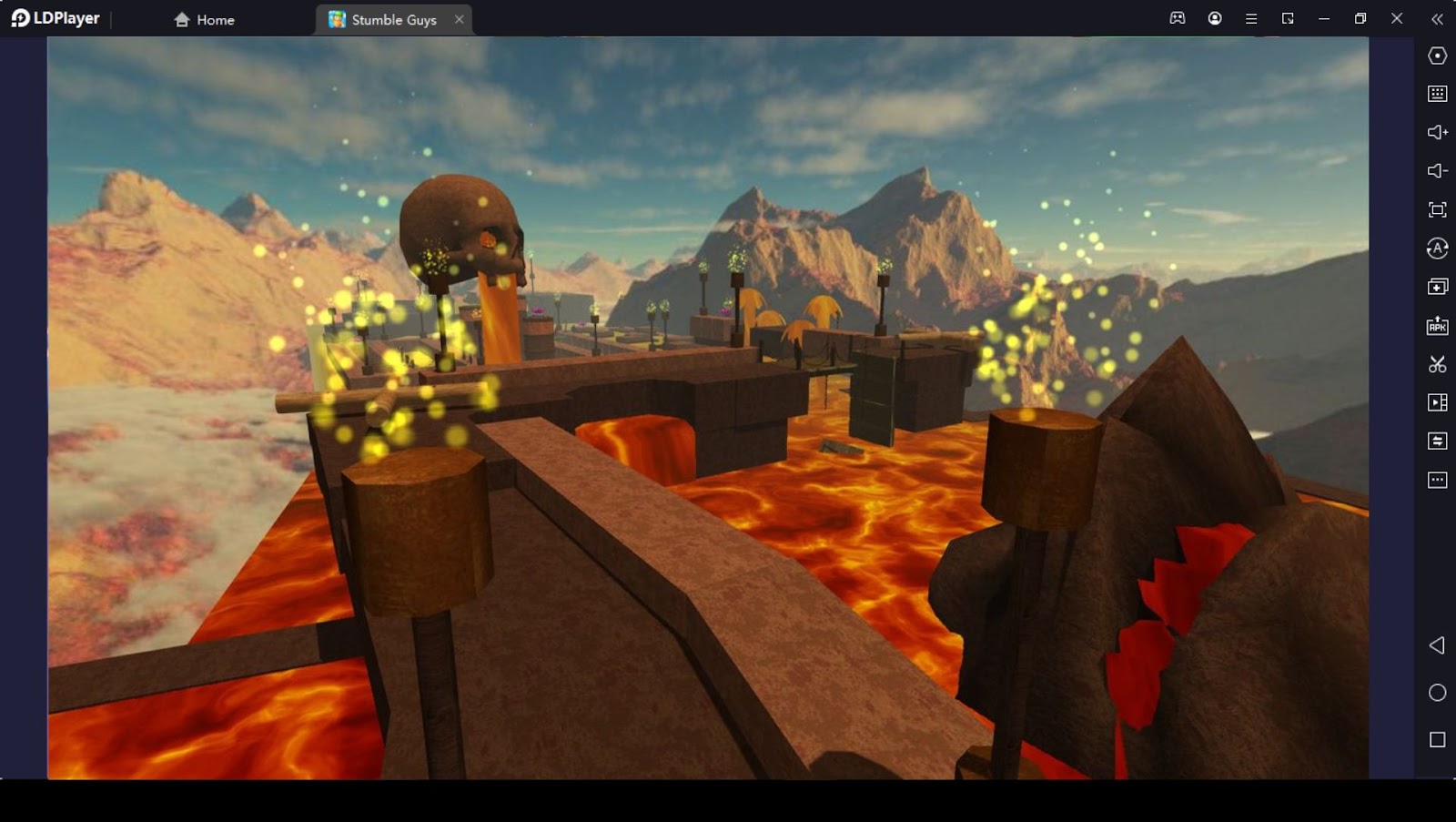 In Lava Rush, you usually have to make long jumps and avoid spinning logs with spikes and falling fireballs. In Lava Rush, however, the incoming shots will completely melt you, making you wait until you respawn to keep going. Also, the level of the lava flow in this map is constantly changing, so different parts of the course may be accessible at different times depending on how high or low the lava is. You might have to wait for the lava to stop moving before you can move on.

How to Beat the Lava Rush?

But there is a more straightforward trick you can use; once you pass the first volcano, you will see two pillars next to it; jump to the first pillar, then jump to the second pillar; once you get to the second pillar, go to the corner and jump to the second part of the broken bridge. To jump this far, you have to run, then jump, then when you are about halfway to the landing spot, use the double jump to cover the other half of the map. To make sure you are not falling, you can use the kick emote when you are about to land in the corner. 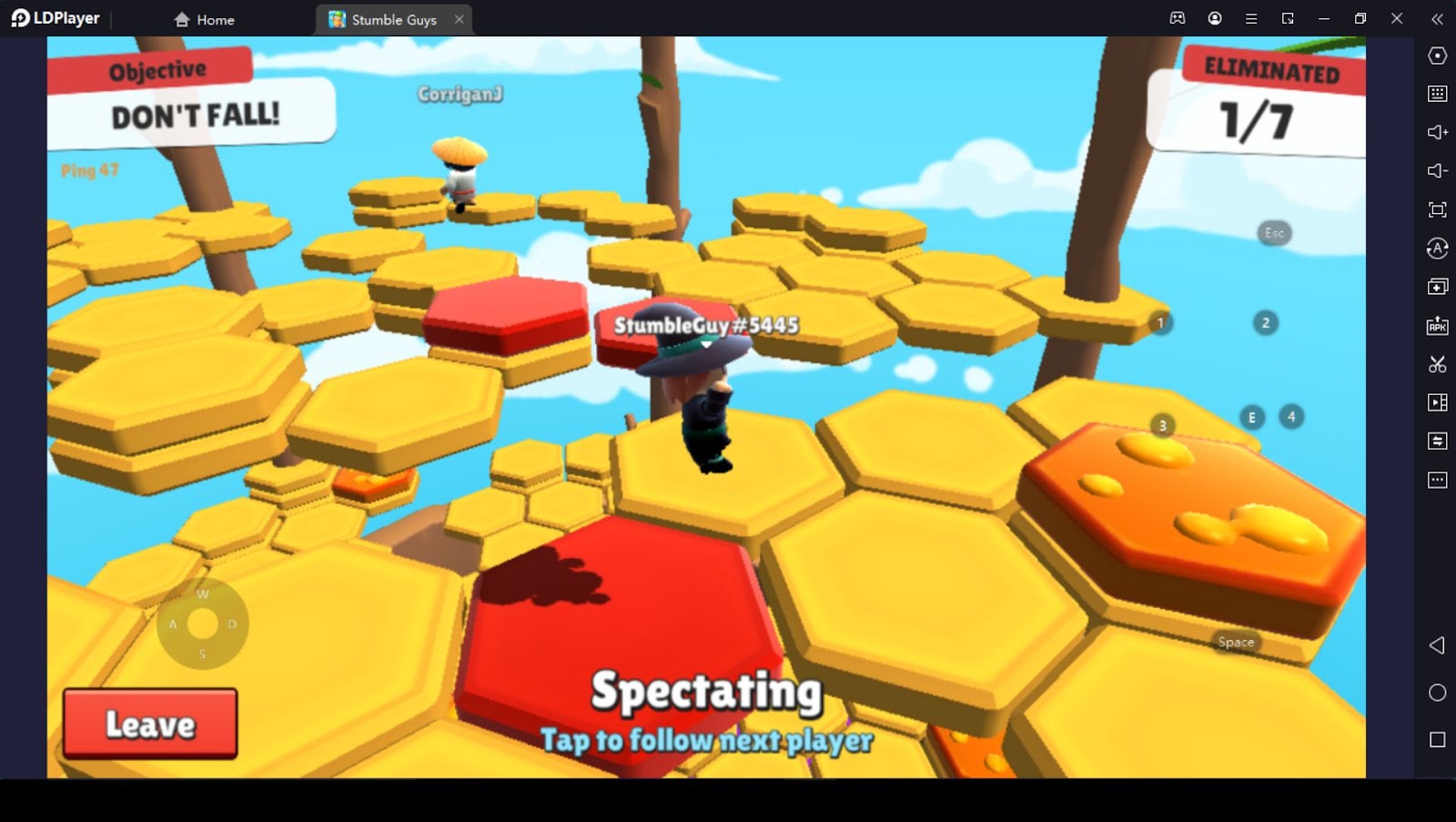 The action takes place in a honeycomb-patterned, multi-tiered arena. The catch is that if a player steps on the tile, it will turn red and disappear in a second. The goal is to keep moving and avoid going down to lower levels as much as possible. If you don't, the game will quickly end because there are no more levels to go down to, and everyone will die at once.

There is a trick to extend the time you get to stay on a tile. To do this, jump once when the tile is about to disappear, then after one second, jump once again while moving forward. Better to use a double jump when you jump after one second. It may not feel like much, but when you sum up the time you save with this trick, you will understand the value.

The next one is a little hard to do but an effective way of saving tiles when you walk along the edge of the honeycomb; when a tile is about to vanish, jump outside of the tile(one jump) and then turn back faster and do a double jump to the direction the next tile you want to land. If you jump and use a double jump halfway to the landing tile with a kick emote, you can jump further than three tiles. 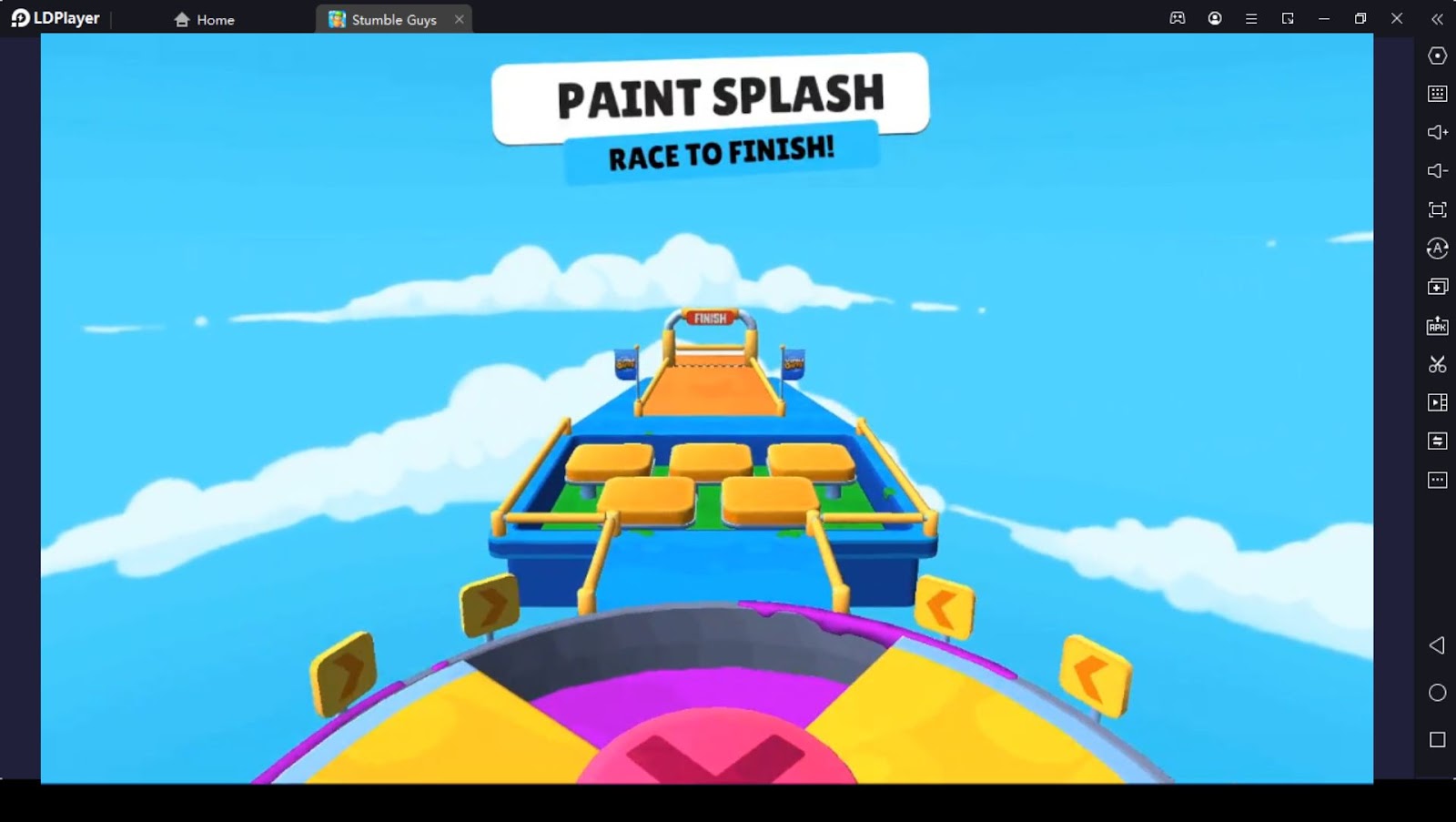 The name comes from the two kinds of paint rollers that appear as obstacles: one that rolls from side to side at the beginning and another that rolls from front to back later on. There are a few moving platforms between the paint rollers and a big red "X" button. Players have to move across the platforms without standing on the central X, which will randomly shoot up and kill them if they do.

How to Beat the Paint Splash?

If you go to the left or right edge of the paint roller box that goes left to right, you can avoid getting hit by it. Also, if you climb onto the starting place railing, you can jump over the first rollers you meet. 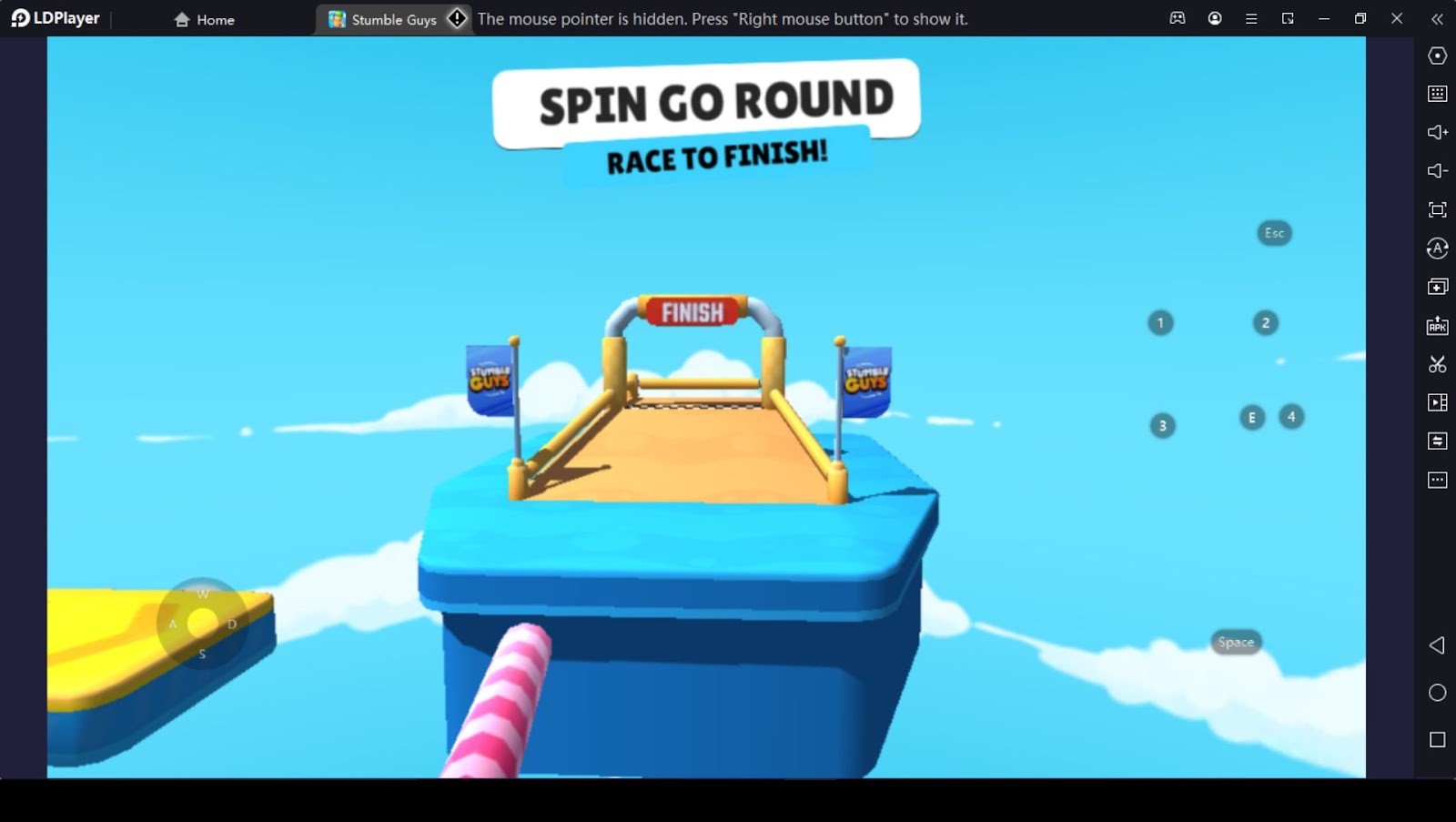 Because the map has both moving floors and obstacles, it might be hard to move in the right direction even if you take your time because the floor tiles will push you in different directions if you don't move at the right time. The rubber hammers can slow you down a lot in the first part of the level, which is the hardest part. In the later parts of the game, you'll have to jump over logs that spin and platforms that move. In these situations, you must take time and carefully plan your jumps.

Beat Spin Go Around in a Best Method

You can use the railing to avoid the first part. To do this, jump onto the left side start area railing and jump to the wall; from there, you can walk along the wall to avoid the hammer spinning part.

If doing that is hard, you can climb onto the gate post of the starting place using the railing and jump to the middle where the sliding floor is moving to the left side and maneuver from there. This will allow you to move faster than the usual way.

When you get to the edge of this Stumble Guys map, if the floating platform is far away, you can stand on the left side until the spinning pole comes to you; then, when it is about to hit your jump up, remember to change the moving direction to the finishing line side. 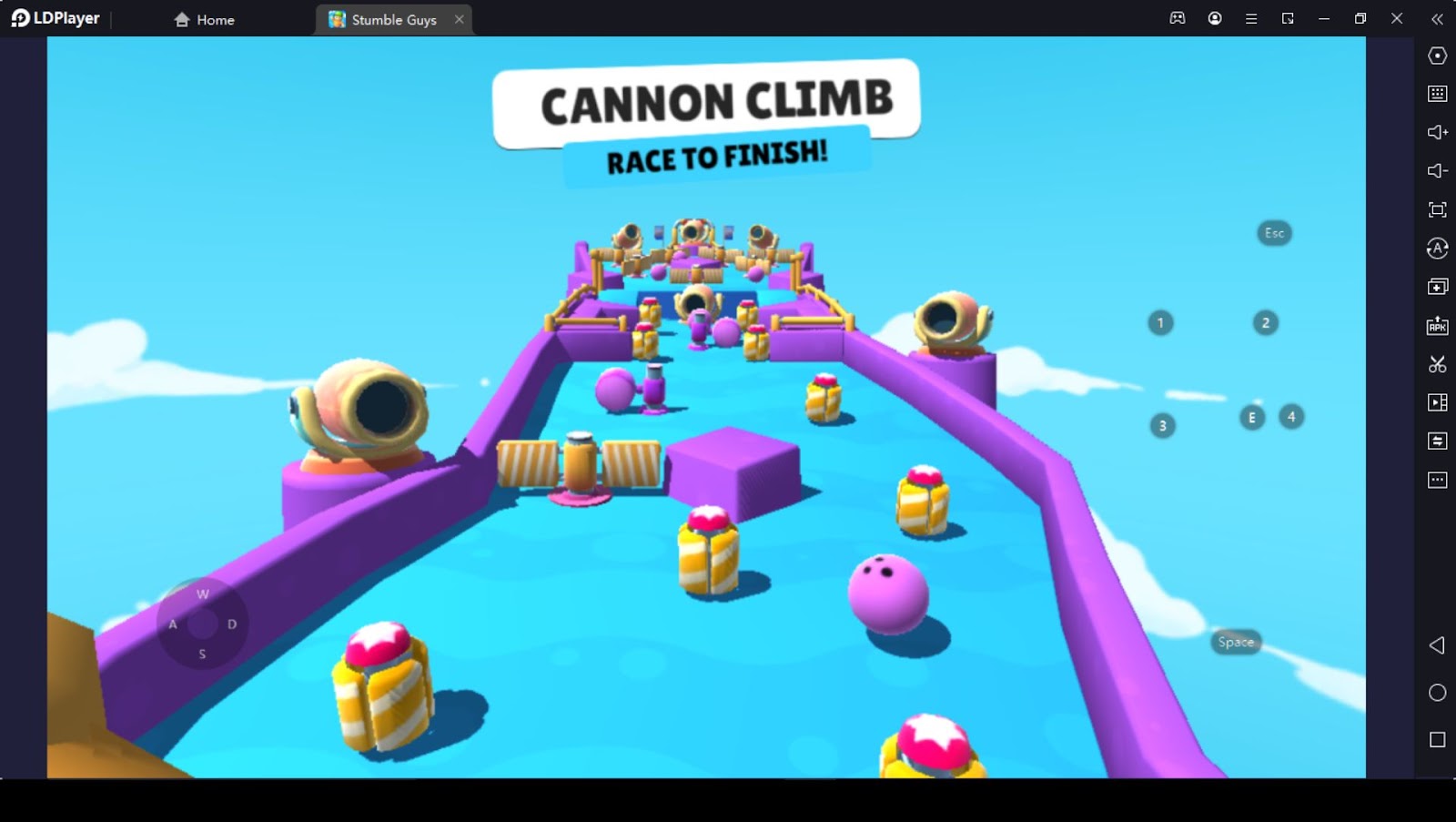 The goal of this Stumble Guys map is to reach the top of the mountain without getting hit by any cannonballs. To do so, you must first avoid a few bumpers. But the map's namesake, a steep ascent with cannons that fire cannonballs down, is coming up soon. These cannonballs are very hard to predict because they bounce and bump against the wall and other things on the hill, changing direction randomly along the way.

Most Stumble Guys players at the end of the Cannon Climb map wait for players who will cross the last plank of the map and use the punch emote to stop them. To avoid this, you can jump through the side of the canon and skip the plank.

With the LDPlayer 9 Keyboard Mapping feature, the game will be a breeze. With the Keyboard Macro Commands, you can create macros to activate many things like double jump, use double jump, and emotes simultaneously to make it easier to do these tricks. To know more, follow our How to Play Stumble Guys with LDPlayer 9.

We have discussed a few maps in the Stumble Guys and tricks you can follow to win the game easily. Credit for all these cool tricks should go to the Detroit YT YouTube channel. To know more about the other maps and tricks, please go to the Stumble Guys: The Ultimate Map Guide; how to win every match part 2 of this guide. We hope these tricks will help you to win more crowns. Thanks for reading; we wish you the best of luck.