EROLABS who have made another step toward the adult fantasy world, and they came up with the most realistic game for the adult gaming market with the name of Rise of Eros. It has already been stunned and mastered with so many stunning 3D visuals as well as AAA graphics, and this is not just an adult game. But also combines the combat with actions along with the sensory scenes. So, as a Rise of Eros beginner, it would not be many things that you know about the game so far, and keep up the head with this guide as we are guiding you with the basic things about this game. 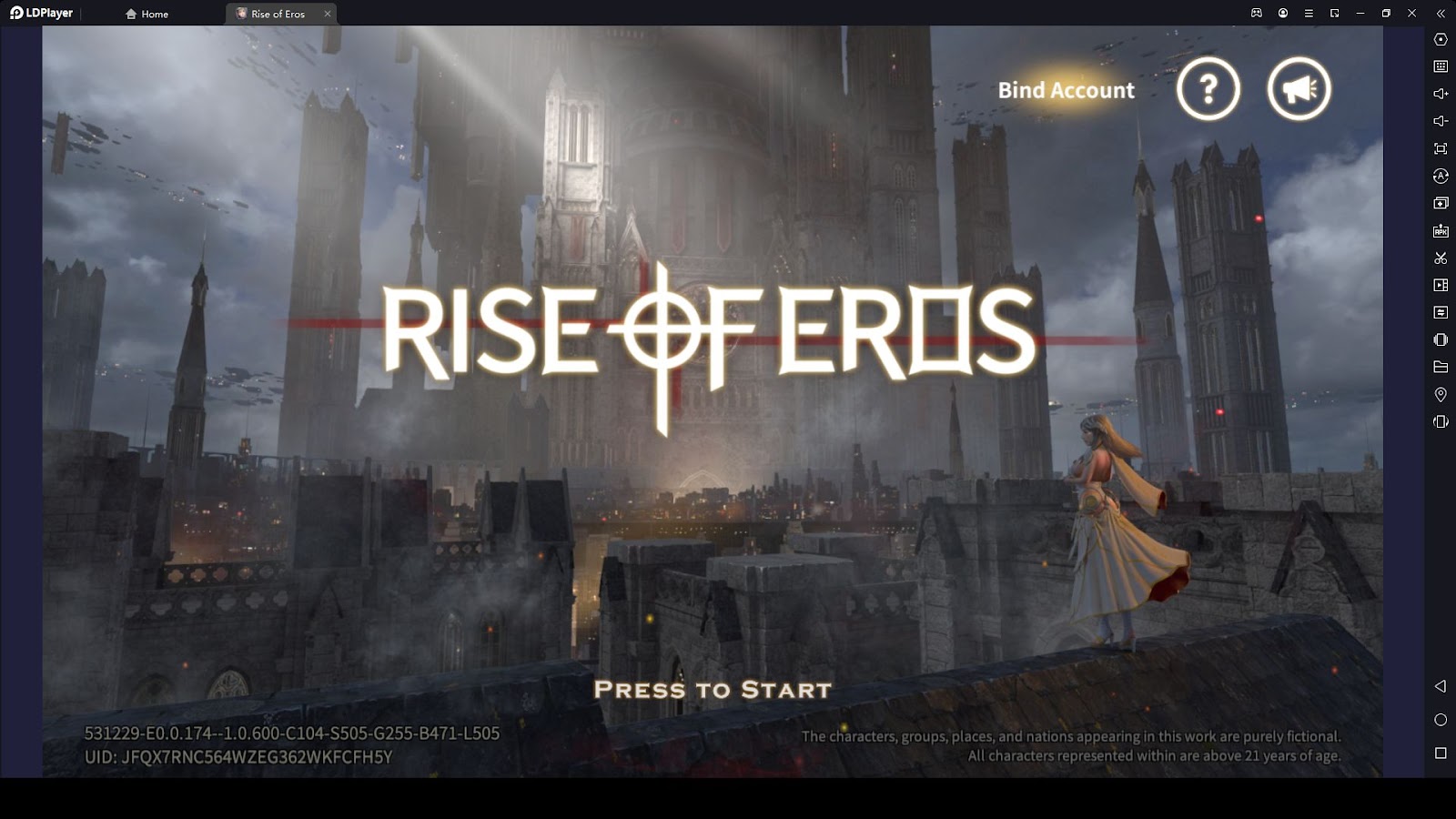 First of all, before you dig into the gameplay as a Rise of Eros beginner, you need to understand what exactly this game carries. So let us introduce you to some defining points. The game is set in a fantasy world, and there are realistic 3D characters that we have to build for intimacy. Apart from the intimacy, the game carries several types of game modes in there as well. So the gaming experience you will feel here will be totally unique and amazing.

So today, we are going to present you all the information you should know as a Rise of Eros beginner; to make yourself prepared for the game as we are here presenting you the basic mechanics of the game with all the details, and now you have a perfect chance to have Rise of Eros on PC with LDPlayer 9 as well. Let's dive into this new fantasy world and see how to get the best experience. Let's start.

The first thing that you need to be aware of as a Rise of Eros beginner is its gameplay. The entire gameplay will revolve around intimacy and combat actions, and we will be provided with a range of 3D realistic characters to make it more fun. The mature audience is the most suitable players that we recommend to deal with this game, and apart from those, we have to deal with four gameplay modes: 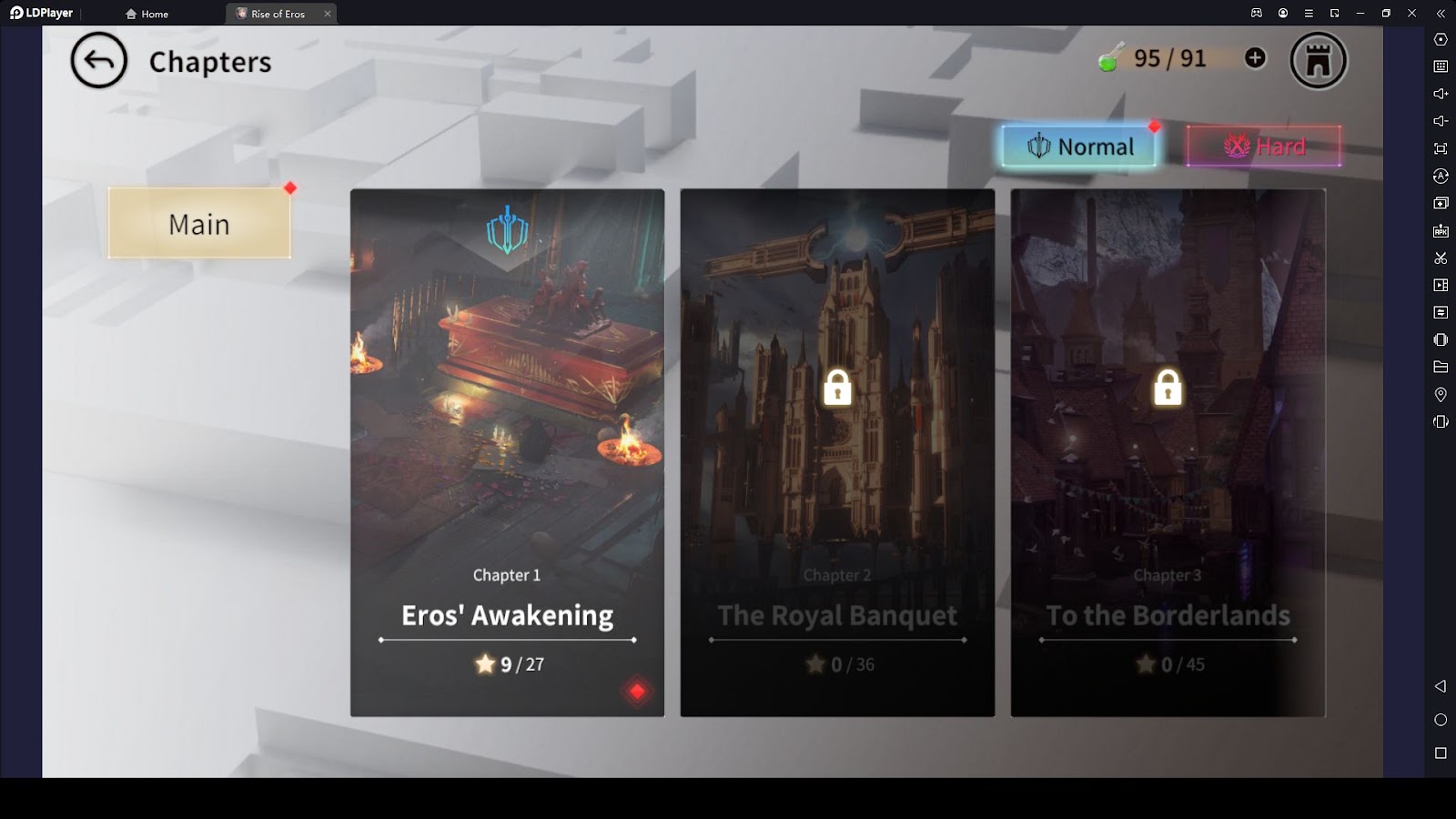 When you go through the game as a Rise of Eros beginner, there will also be a turn-based combat battle system to deal with, and you will have to put all your efforts into getting good gear because even though it's an H-game, the game’s battles will not be easier. 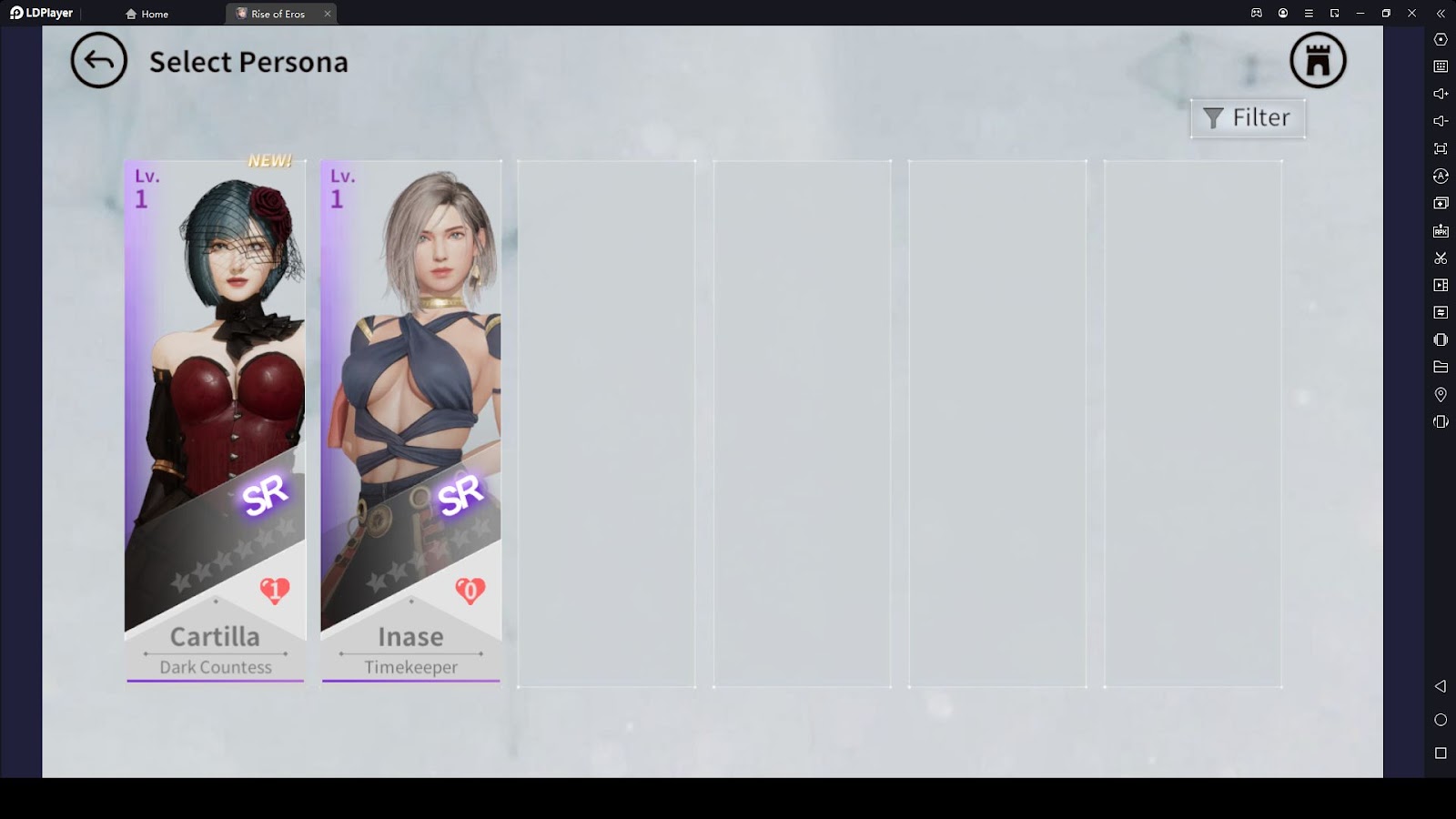 You and your unlocked waifus can hang out in the "Boudoir" menu item. With the help of intimacy potions, you can get to three different levels of closeness. The opening h-scenes sequence of the game is never shown again.

The other H-scenes are all in story nodes where you can go back and see them again; you just have to clear them. Unfortunately, there is no way to know which story node has the h-scene you want to see. Also, unlike The opening h-scenes sequence, the camera stays still during H-scenes that happen within story nodes.

Free to Play and Play to Earn

The game comes with both aspects, but it is kind of hard to have a 100% collection from it while you are a F2P player. When you play as a free-to-play player, you might have to have better luck in this game to have the most from it.

On the other hand, the standard banner of the game will ask players to spend some premium currency, and there is a coins stage offered for the players to do daily. It gives you 80K coins for a turn, but going through level 1 to the 60 will be challenging as it requires more than 1.3 billion. 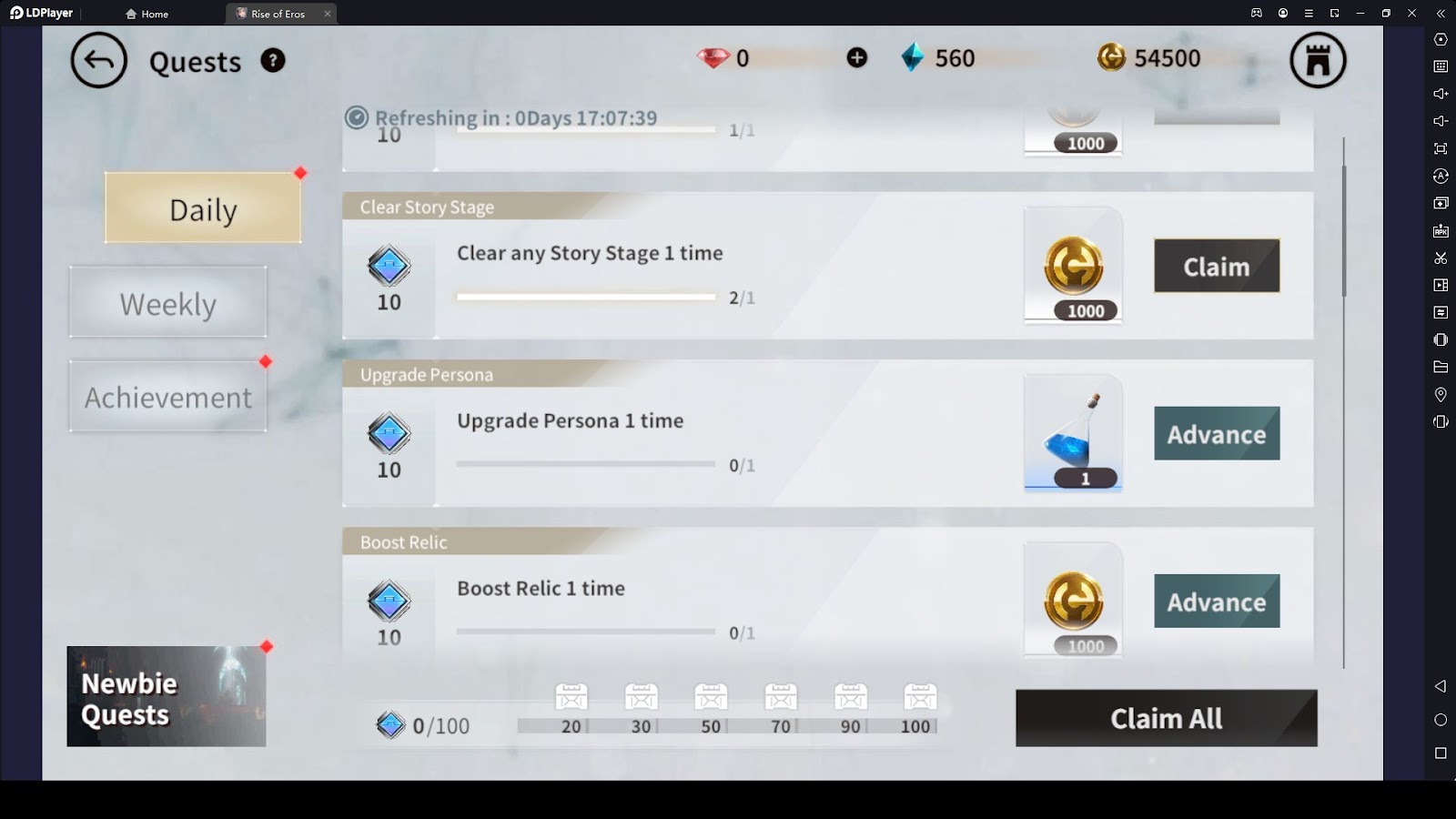 The next thing that we want to emphasize from this Rise of Eros beginner guide is its gears as well as relics.

First, let's have a basic idea about the gears as a Rise of Eros beginner. The gears will be spectacular as per the games' classes, and those come in strength levels of HP, Crit Damage, AVD, and Defense. So choosing what matches you will solely depend on what you choose as a class, and you need to find the perfect gear to perform the best out of this gameplay.

You must use the banner to get new gear, artifacts, and characters. You have to pay 180 gems to pull the banner. The gacha system has three banners:

The pity is at 150 pulls, it doesn't seem to reset when you pull an SSR early. The first time you clear a story node, you get gems. You will also get 30 gems every day as a reward.

Most pieces of gear have both primary and secondary stats. As you level up your equipment, you unlock and improve random sub-stats. Items can be worn in sets of up to six pieces, and when two, four, or six are worn together, you get a set buff. You can pick and choose what you need.

For example, when you wear six pieces of the tank set, you get a 16 percent defense boost; when you wear four pieces, you get 12 percent; this is how the buff will be changed according to the number of pieces you wear. So it is obvious, even for a Rise of Eros beginner, that wearing five or three of the same kind is not beneficial. 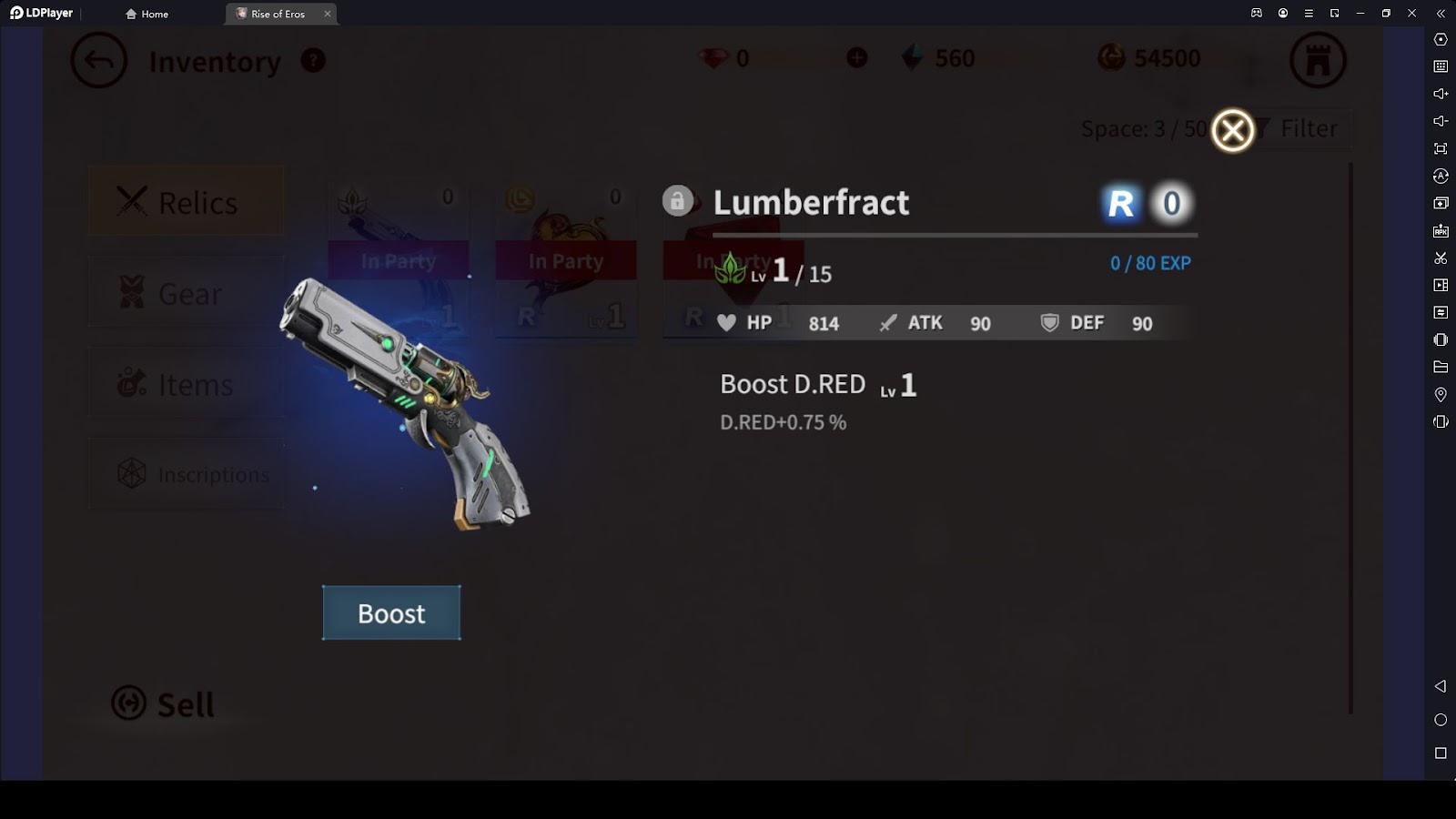 The next is about the relics. This game will feature up to several types of relics that the accent god power has inspired, and those artifacts come in more real powers than any other. You have to pull on banners to get them, and each one comes with different types of stats, damage levels, and accuracies. They will also have possession time, so be careful enough to do the maximum out of your game with the best relic.

Get the Most out of Your Combats with LDPlayer 9

We have a simple answer for you if you are seeking a way to do the best out of your combat as a Rise of Eros beginner. It is the best android emulator: LDPlayer 9. We will utilize two main features here to get the most out of the combat Keyboard Mapping as well as Keyboard Macro Commands. 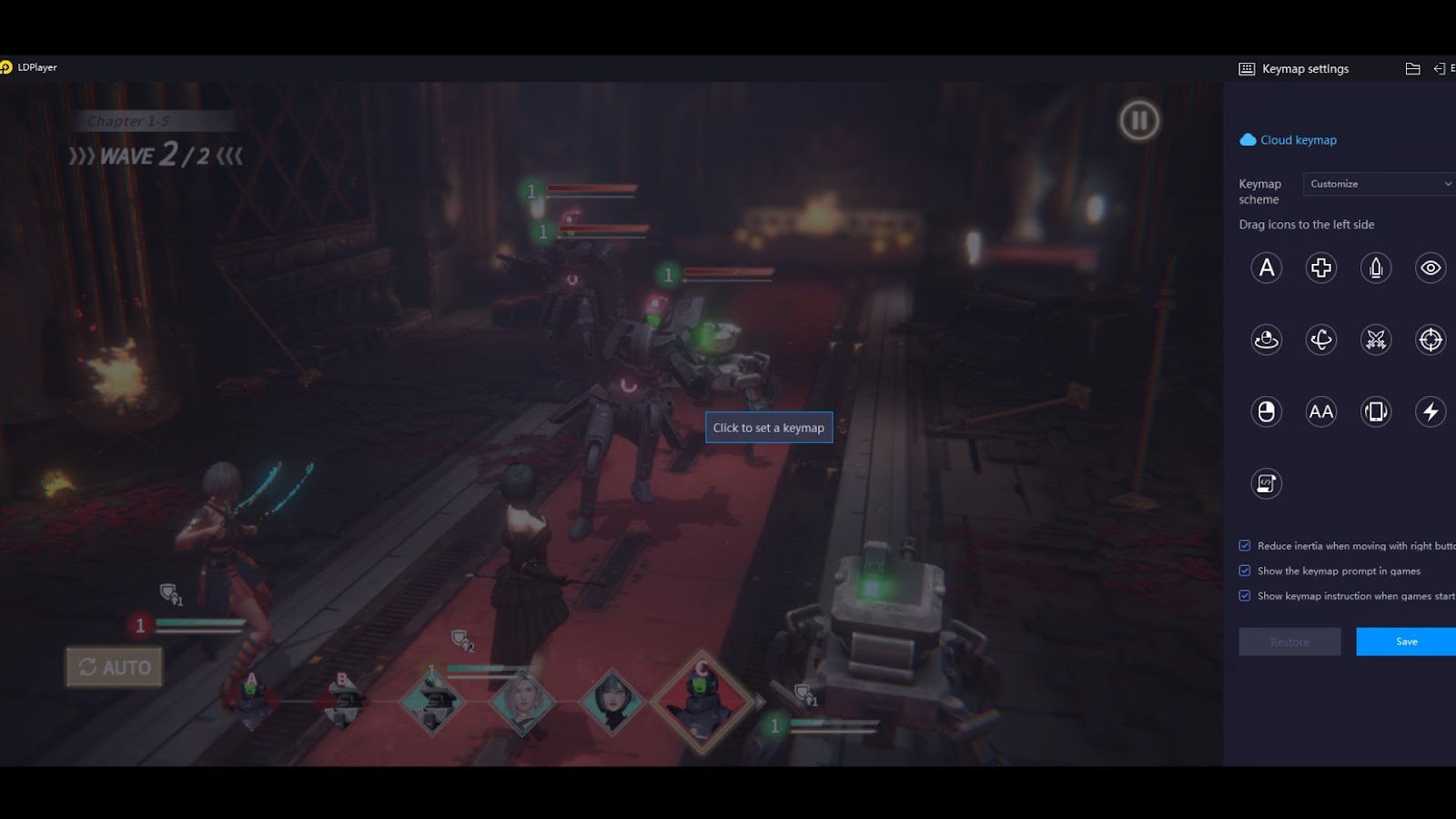 First, let's get into how Keyboard Mapping helps you with combat. Here it sets you with some personalized controls over your game by setting the easiest controls. Because the game’s battles can’t be played in auto mode in every fight; you have to use each character's skills manually; if you set keys to each skill, you can use skills without dragging your mouse here and there.

If you seek some more of the smoothen controls, you can set some other keys to deal with the different actions in Rise of Eros.

The second easiness for a Rise of Eros beginner will come through the Keyboard Macro Commands. Here it works for simplifying all the repeating actions, and it can write macro commands for one or two or more to combine them all to be activated from the same key. This way, it is going to be very easy and very fast to handle all the combat movements in the game, and you are reaching the maximum effectiveness from your gameplay without any doubt.

We have talked about many things about the game from our  Rise of Eros beginner; We hope the information provided here allows you to play the game easier and jump into the game with confidence. We have to say this before we end this guide; the main thing you should focus on is saving gems because you will not go further in this game without them, and don't forget one thing. This is for the mature community. Feel free to download LDPlayer and enjoy the best gaming with Rise of Eros on PC. If you want to try out similar games like Rise of Eros check out our Top Adult Android Games 2022 and Top 18+ (Adult) Mobile Games.