KonoSuba Fantastic Days is a Japanese RPG game with an inspiring anime series. At the initial stages, the game was developed as a novel based story, and it serves incredible anime and manga features to the players. The original story has mesmerizing full voice acting and SD character designs with few main characters. There will be several weapons with unique and special characteristics of the game. 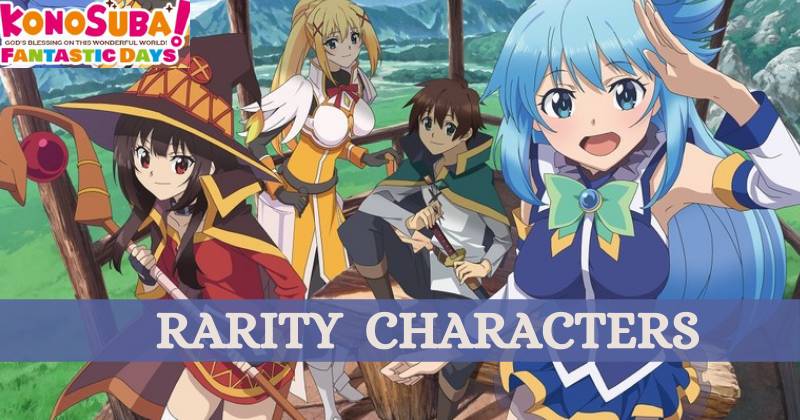 In the game KonoSuba Fantastic Days, you will find some recommended characters with relatively low star rarities. Mainly they will be one-star and two-star with three-star characters. The rarities of each character are significantly essential to create the guidance of organizing the party. So, with the rarity, you can identify the strength and the priorities of training also. Now, let us find different recommended low star rarities of the characters. And now you can download KonoSuba Fantastic Days on PC and start with your battle.

In the rarity of the three-stars, there will be three main categories best, excellence, and usually. There are different characters in each category. Namely, they are as follows, The primary handlers of daggers are Chris, Erika, and Melissa. They are excellent characters with a massive amount of steps and strong special skills. But they are from low rarity, and if you have not all the four dragger characters, it is recommended to prioritize their rise. If you possess the four-star of the aiming characters, the three-star characters can use for different attributes. So, it will be helpful and worth raising as a sub-member.

Priority to Erika playing in the snow

Snow play Erika is a limited event character who has excellent skills to enhance the allies' agility. She will depend on the content and the organization of the quest. As Erika is from the three-star rarity, the four-star rarity will adapt with the highest priority. That is why the players need to raise the characters with significant importance among the above characters.

Iris and Dust are characters who have the highest status among all the other available characters. There will be no change in their abilities, although they are from the three-star rarity. These two characters act as excellent sub-members also. Iris and Dust are highly compatible with their physical type as the attackers.

Megumin is a sub of Megumin

The three-star Megumin is a character who is highly compatible with the four-star Megumin. So, they are the sub-members of the same character. The players can use Megumin to enhance the speed of deadly gauge accumulates. The case of quests that can damage during a limited time, like the boss battles of the events, will be necessary. It will do a significant duty on the number of times that you can attack the particular skill. So, Megumin will be an applicable three-star rear regardless of the dedicated sub-member.

Take a look at on Full Tier List from here.

In the rarity of the two-stars, there will be two main categories excellence, and usually. There are different characters in each category. Namely, they are as follows, There will be a low priority to buff and debuff holding characters. Most of the two or fewer star characters have skills that damage not only to buffs and debuffs. There will be no considerable effect on the buff. The worthy skill frame has been already reduced. So, they cannot introduce as very excellent characters. The characters which have the maximum amount of attacking skills will be easier to handle.

The character of Mia has only the Evasion skill. She is a two-star character who has a talent that cannot do any damage to the buff. Mia's buff is the only skill to enhance the rate of Evasion among all the other characters. Even though there is no high rate of avoidance increase, Mia can introduce as an excellent character who is valuable to adopt. Mia is a character with a good turn in the arena also.

Secure if you have no healer

If you are four-star and still have no healer, you have to use two-star or three-star characters. You can use two-star characters named Cielo and Amy to get an overall skill recovery. That will be excellent, and it is recommended to use them as the training candidates. Amy; Lightly dressed, have no a complete recovery. But, the characteristics are helpful to strengthen the resilience and four-star Amy. So, it is recommended to use this character as a training candidate.

In the rarity of the one-stars, there will be two main categories excellence, and usually. There are different characters in each category. Namely, they are as follows, Chris is the only character with a high probability bind. This is a skill that will be useful in the boss battles. In the arenas also the binding skill will effectively function. Chris is a character with a relative delay ability in combination with the special effects of herself. It will be excellent with those features.

Dust and Mia with the proper attributes

When categorizing characters as excellent and normal, there are some particular criteria. They can briefly have shown as follows, Reroll these all characters with the fastest method. View here our KonoSuba Fantastic Days Reroll Guide.

KonoSuba Fantastic Days is a fantastic game with different types of team combinations. When you make your team, you need to select members from other rarities. As the lowest rarities, the three-star, two-star and one-star characters will take into account. Now, we have discussed all the types of characters, including these three rarities and their unique features, which will help you. Hadaka Shitsuji Guide and Walkthrough with Tips for Starters