Have you ever played a mobile game that never ceases to amaze you? If you have played, then you know how amazing the Illusion Connect is. It really connects you with waifus and Leader in the game. Illusion Connect is a turn-based role-playing game developed by Superprism Technology Co., Ltd. As of now; you can summon more than 50 partners to play within the game. You can also use the equipment and enhance them further to increase your partner's stats. Create multiple lineups and destroy your enemies while enjoying Graphics and visual effects.

If you are ready for this, then you already know about Gemmy. We are here to answer the questions that haven't been raised or answer by any other player. Yes, Gemmy is good, but can you still say it's good as a F2P where every single resource matter and you can't mess up at any cost. So, without further ado, let's start by answering your question.

There's a lot of fuss going about Gemmy. Is she worth it? Did you summon it? How much you spent on it and different other discussions. But most of those discussions didn't include whether she is a good partner to have in Illusion Connect once the Halloween event is over.

One character can define your gameplay but is that character better in other modes too. It's easier to kill big bosses when you have lots and lots of damage boost, but as a F2P player, is Gemmy worth all the trouble?

For a F2P, every game resource has 10x more value than for a P2P/P2W player. So, these are a few of the questions which a lot of players forgot to mention. Below you will find all the related answers to the above-given question and scenarios. So, without further ado, let's get started.

Gemmy Partner and Why is being discussed everywhere?

Let's talk about Gemmy as a partner, her skills, and why she is getting a lot of attention in Illusion Connect. Gemmy can kill the last Halloween boss pretty quickly and easily. It's like she is made for the job. This is one of the reasons why everyone is talking about her. Gemmy comes with a Combat Passive skill, "Hunting Time." This combat passive allows Gemmy to revive a maximum of two times in each combat after five-star. Upon reviving Gemmy gets 100% ATK, 100% DEF, 1% HP, and 1000 Rage. Gemmy will get 50% ATK the second time Gemmy revives during combat. The boost this skill provides is massive and makes Gemmy a unique partner, which can pretty much kill a lot of bosses.

This is the second reason she is so famous in Illusion Connect, but the real question arises here: What about if I have a low-level Gemmy? Will she be helpful? Well, sadly, the answer is no.

It will be best if you only summon her when you have enough tickets to summon her dupes because the best way to utilize Gemmy is by making her a five-star partner. That way, Gemmy will get two revive chances, which can change the outcome of combats. At level 100 and above, Gemmy can pretty much kill a lot of bosses single-handedly.

The best part about having Gemmy is that you can put her anywhere during combat; just make sure she takes damage. The worst spot is the middle; put her there so she can die and come back to do massive damage. This is the third reason why Gemmy is being discussed everywhere.

Is Gemmy worth Summoning (for F2P) in Illusion Connect?

Gemmy is worth summoning as long as you have enough tickets to get her dupes. Gemmy is a beast; if she is at level 100 or above before that, not so much. Gemmy can't do much damage before level 100, and after level 100, she is unstoppable; it's like she suddenly gets superpowers. If you are free to play player and have summoned Gemmy, make sure to take her above level 100. 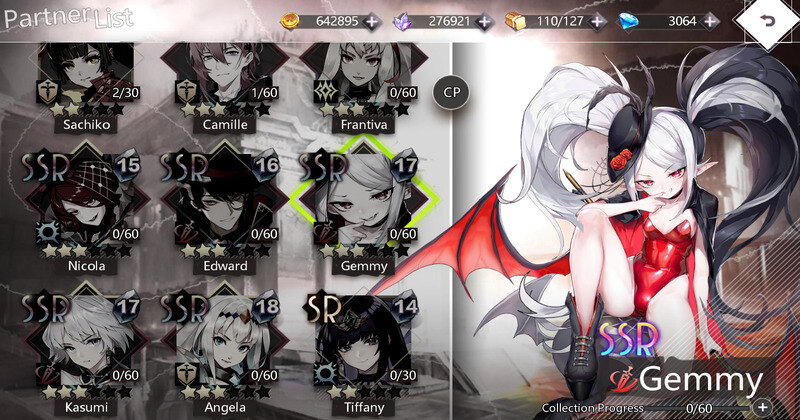 Gemmy is a good partner to have as she performs quite impressive in PvP and PvE mode. This is the last day to summon her, and we hope you have been patient and saved all of the tickets. If you are reading this, summon her as soon as possible. Also, summon her dupes to level her up.

The overall Gemmy character is quite impressive but can she solo kill high-level bosses? The answer is no she can't solo high-level bosses even if she is maxed (not including max equipment). She can do massive damage, but she can't get to the backline until you clear the front line with other partners.

Gemmy is a DPS partner because of her Combat Passive skills. The best way to increase her damage is through equipment. You can equip the equipment which provides more ATK and ATK speed. If not, then you can also go for DEF or HP. However, putting attack equipment will increase her damage drastically. So, make sure to give her the best equipment available to see her potential.

PvP vs. PvE Mode and Gemmy:

⦁    In PvE mode, it's safe to say she overpowers many bosses and can be the one character you would want in your lineup.

⦁    In PvP mode, it all comes to the strategy you use and what's your line up. You can't mess up in player vs. player mode as the other player knows how important it is to get rid of Gemmy as soon as possible. The best way to utilize Gemmy is to treat her like a Leader and build your lineup around her. Summon other partners and clear out the lanes and then summon Gemmy to rip apart your enemies by doing nothing. Make Gemmy your priority to ready her for late game, and your enemies will fall into their own traps.

The overall game is fun to play, but to become a good player in Illusion Connect, you need good characters/partners and upgrade them at least above level 100 to fully utilize their powers. Only summon her if you can summon her dupes, too, because no matter what, she needs to be above level 100.

Gemmy is one of those partners/characters, which will help you a lot with faster progression and clearing levels. Make sure to put all your focus on her and build a team around her. That way, you can overpower your enemies in PvE and PvP mode. Read all the above information and decide what you want to do as a F2P player, as we have mentioned multiple times that every single resource matter.