Garena recently released the enhanced version of the most popular battle royale game 'Free Fire.' The new version is named 'Free Fire MAX,' which shows that everything comes with the maximum best quality possible.

The game comes with various weapons that all fans shall love. Other than the fact that you can demolish your foes with any weapon, it is true that many are intrinsically better than others, either because of greater qualities or for other reasons such as simplicity of usage. And like the best of us, you would prefer weapons that defeat your enemies as quickly as possible.

To that aim, we've chosen to compile a category list of the greatest weapons in Free Fire MAX for 2021, so read on!

Alongside a decent mix of fire rate, range, and consistency, ARs in Free Fire MAX are often all-arounder. However, their flexible design allows them to be competent in all jobs while not specializing in any. Regardless, they are excellent backup weapons because they may assist you in a hurry if you're utilizing a more specialized gun as your primary weapon.

The top firearms in this category are as follows:

The GROZA has the advantage of acting like an SMG while delivering the same damage output as regular ARs. In other words, it combines the strength of a rifle with the agility of an SMG, making it lethal at close to medium ranges against any adversary. Want to hose down your foes with a barrage of bullets? M60 is your call. It is powerful and has a large magazine size, allowing you to spray your opponents into a corner and even kill them if they dare to look. On your knees, dirty foes! Considering how ARs need to be able to engage adversaries at a medium distance, these two are ideal for that.

SMGs, like ARs, are frequently automatic weapons. With a few exceptions, submachine guns are meant to thrive at close quarters, whereas assault rifles are designed to work in most scenarios. Rapid-fire combined with low stability allows them to threaten opponents from a distance.

Then again, SMGs are quite simple, and the finest weapons in this category are no exception:

When it comes to raw damage output, MP40 is still the undisputed champion. However, the MP40's tremendous power is only countered by its similarly large firing rate, which quickly depletes magazines, and its severe recoil, which makes it difficult to maintain your aim steady while shooting. So, caution! Use this rifle like a shotgun from a safe distance. Introduced in a recent update, this variant of the Vector entails carrying one of these weapons in each hand (Dual-Waving), letting you destroy any attacker dumb enough to get into range. While the MP40 is the undisputed king of individual weapons, the akimbo Vectors are in a class of their own. However, remain mindful since they are not only unstable but also consume ammunition fast. SMGs are great if you want to get tight and personal. But if you are one of the players that prefer weapon expertise, you might consider shotguns.

You have seen how simplistic weapons can be deadly, but if you believed SMGs were the best of the batch, you haven't seen anything yet. Shotguns are extremely basic weapons that require little to no aiming to be successful. However, don't be fooled by their simplicity; while anybody can aim and fire well, only the greatest players can rush and jump-shoot you in a matter of seconds. Unlike the other categories and their great weapons, Free Fire MAX has only four shotguns. Furthermore, while they all act similarly, the M1887 is the only one in its class that beats the others. In the hands of a skilled player, this shotgun can effectively 2-shot any adversary, regardless of armor and durability. This is because that it not only has greater damage than the others, but it also has a longer range. Conversely, you must make your shots counts due to their 2-bullet capacity. If you don't, you'll be faced with an unloaded gun and the prospect of your doom.

Sniper rifles are equally difficult to operate as shotguns, although for varying reasons. Improving sniper rifles need elegance and accuracy, whereas the shotgun necessitates practice swinging and leaping while firing. In other words, if you're not skilled enough to shoot at the head with a sniper rifle, you're doing it incorrectly, and an AR would be a better choice. That being said, while there are stronger firearms in this category, most of them can one-shot opponents if aimed at the head. Still, if we had to pick a decent weapon in this area, we'd go with the KAR98K. While not as strong as the AWM, you can discover this weapon lying about everywhere rather than only in a dropbox. Furthermore, if the enemy is not wearing decent headgear, the KAR98K can readily one-tap any opponent as long as you go for the head.

Pistols in Free Fire MAX are more or less incidental weapons that you'll only utilize at the start of a round. However, these kinds of guns may get you a few kills in the proper hands, particularly if you're skilled with the larger hand cannons.

The following are some of the greatest pistols in Free Fire MAX:

Deadly and massive, both in damage and recoil, the Deagle does the most damage of any pistol, except for maybe the M1873. A good strategy would be to get one of these as soon as you land and grab a few early kills since most players will not have strong armor at that time. Similar in firepower to the Eagle, but a little inferior and having a built-in scope. The M500 lets you strike much further off-targets, which is ideal for the start of the game. 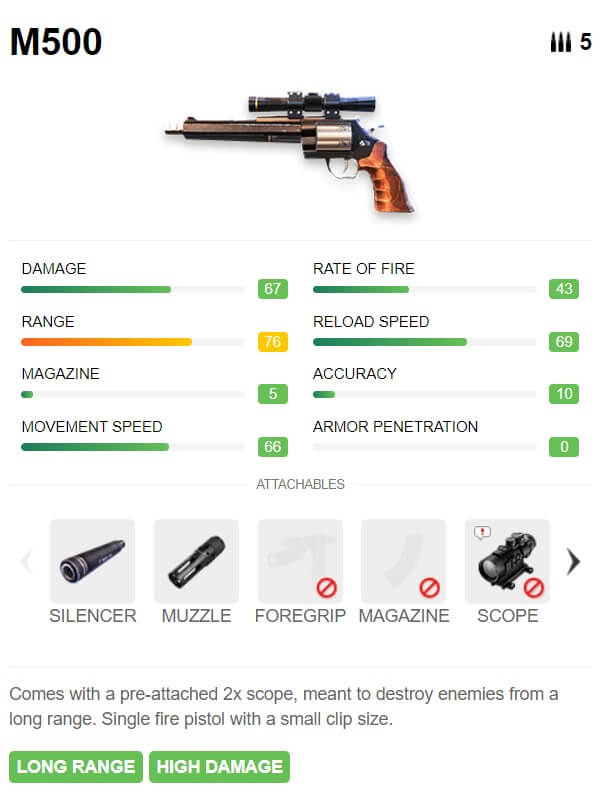 The game's toughest "pistol," but only because it's a sawed-off shotgun. The M1873 can easily grant you a few kills in a few shots, but you must be almost spitting down their throats to do so. It is recommended to be used only if you are out of options. Throughout many situations, you'd be best off switching out your pistols for any other weapons you come across. However, these are the greatest "standalone" guns, which, in the right situations, can even let you go foot with other rivals, providing they're poor and have bad aim.

These exist primarily to provide an extra speed while using them; however, they may also provide some spectacular end-of-match kills if you can overpower the opponent. However, a few of these weapons have an additional benefit: they can repel bullets while being carried on your back or in your hand. In this regard, the Pan is unquestionably the greatest melee weapon in Free Fire MAX because it has the most surface area and can cover a huge portion of your body simply by having it on you. However, if you want to seem stylish, consider the Katana. These are top picks of weapons from different categories in Free Fire MAX. Still, we always recommend that you play with what you love the most. Always continue to practice your preferred weapons and constantly communicate with your team when playing in squads.

Free Fire Collab with Justin Bieber on their 5th Anniversary