In addition to the system updates and other mechanics revamp, Epic Seven’s October 27th Update also brings some of the most impressive and exciting events to date to the game, allowing players to obtain various rewards, up to 2 FREE 5* Random Heroes, EXP and character materials but also a FREE 5* Moonlight Hero of your choice out of a selection of 30 Heroes from the Moonlight Hero Headhunting Event.

In this guide, we will go over the details and the events that will gift players rewards this Oct 27th Update an guide players on how they can best take advantage of the events to obtain up to 2 free 5*s heroes and artifacts and a FREE 5* Moonlight Hero of your choice out of all of the heroes in the game. 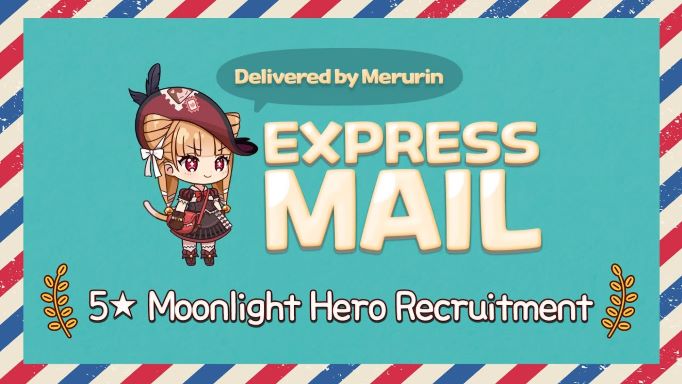 To celebrate the end of the Epic Seven Championship and to help improve the game for both old and new players, special event campaigns have been introduced to reward players with many resources and heroes to strengthen their roster and boost their gaming experience as a whole.

For a limited time, when players log into the game during the event duration, they will be rewarded with various rewards, up to 7 days in total.

In addition, if players were to login consecutively everyday for all 7 days, they will receive additional rewards such as energies and gold based on their log in streak. 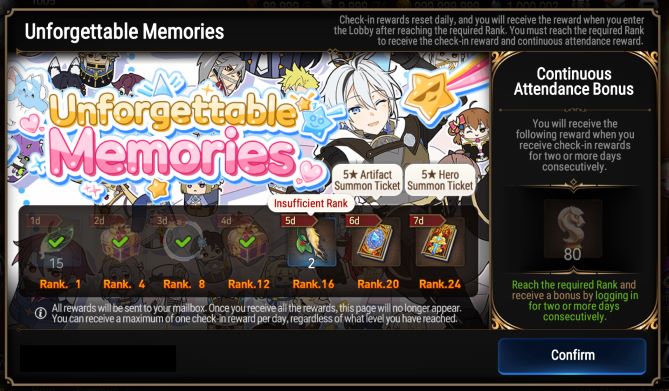 For New and Returning Players, an additional log in event will occur at the same time as the one that all players are rewarded with, doubling the reward and allowing players to get even more rewards out of the event.

Arky’s 7 day Guide is a brand new system added to help newer players be able to progress in the game and be rewarded with various character buffing and upgrading materials. However, this event will be available for all players all the same and is not exclusively available for only new players. 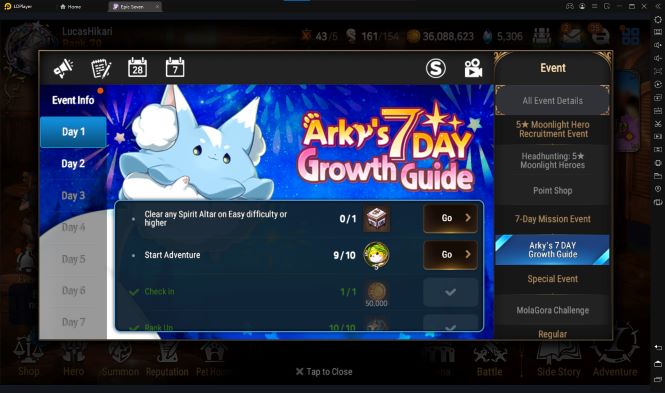 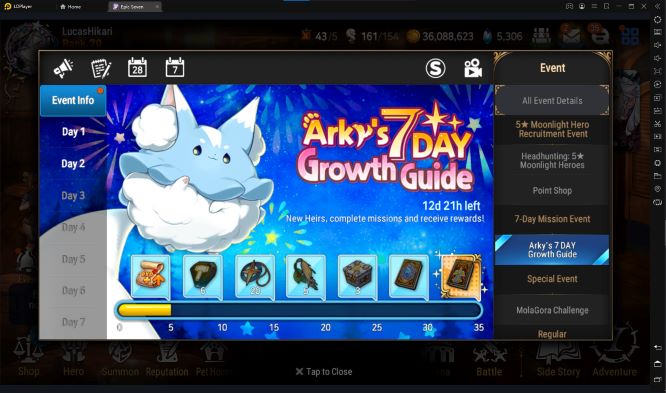 When finishing all missions, Arky’s progress bar will reward players with another free 5* Artifact Ticker and a free 5* Hero ticket, allowing players to recruit special heroes to aid them in battle and enhancing them with unique artifacts.

The Custom Group Summon system makes its triumphant return with the chance for all players to roll for all of the limited characters in the game at this time. This is one of the best chances for all players to boost their heroes roster or hunt for their favorite heroes as it is a very rare occasion that the Custom Group Summon system makes it return.

Like normal, the Custom Group Summon system will let players choose 3 heroes that they would want to be rated up and roll for them with the usual Covenant Bookmarks. Once a 5* Hero is summoned, it is guarantee to be one of the 3 5* heroes selected without fail. In addition, the selected heroes will have their signature Artifacts rated up in addition to the hero, helping players to get both the heroes and artifacts suitable for them much easier. 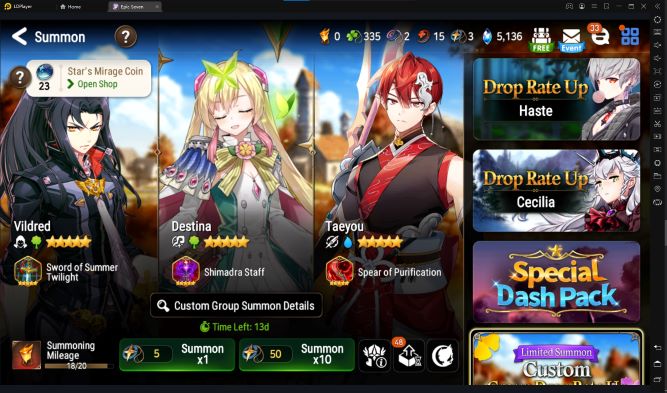 As mentioned, the Custom Group Summon system also rate up Limited Heroes and their Limited Artifacts, so if players haven’t gotten the Limited Heroes in the game, now is the perfect chance for them to attempt to try and get them.

When summoning on this banner, players will be rewarded with 1 Covenant Coin for each summon, which can be used to exchange for various rewards in the shop. If a player gathers 120 coins, they can straight up exchange for 1 of the 3 heroes that they select to be rated up, making it even easier for players to roll for these heroes. 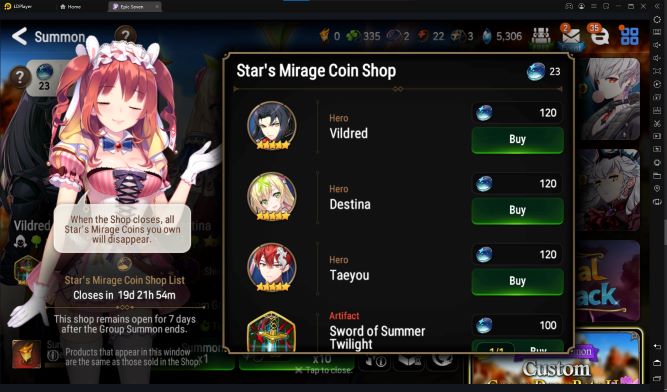 For heroes players should choose for the Custom Group Summon System, players can check out this guide from us for more details.

A 5* Moonlight Hero is among the rarest heroes in the entire game with a 0.1% chance for players to obtain 1 for each Covenant Summons and only 2% Chance on each Moon Light Summons. Therefore, the news of a special Moonlight Heroes Headhunting event which guarantees players a Free 5* Moonlight Hero of their choice is one of the most shocking and best events in the history of Epic Seven as a whole.

How does it works 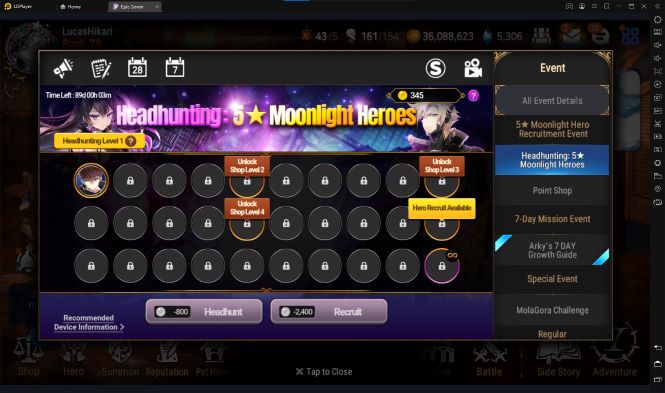 Players will be rewarded with special points once they complete specific tasks such as daily missions, weekly missions and spending energies on stages. These points can then be converted into a Headhunting ticket that will headhunt a hero and fill up 1 of the slots in the event screen. Each headhunt can only be done once daily and cost 800 points for each slot (40 for the first headhunt).

Once players have spent the points to headhunt moonlight heroes, the slots will be filled with the heroes they can pick once the recruit system unlock. Players will need to headhunt a total of 20 heroes (= 15240 points) in order to unlock the recruitment system. Players can also spend points to re-headhunt some duplicate heroes in order to broaden the selection of moonlight heroes that they are allowed to recruit.

Once the recruit system is active, players can recruit a hero from the slots for 2400 coins and add that hero to the roster Permanently with no strings attached.

In addition to the headhunting system, a special exchange shop will be available for players to exchange their points for special items, including the Promotion Potion which instantly promotes a hero to 6* without using up any resources. 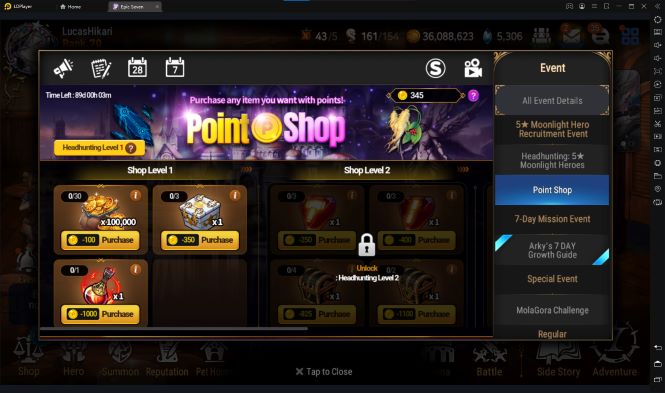 However, players should only start exchanging things in the shop once they have managed to unlock and recruit the 5* Moon Light Hero of their choice.

How to Quickly Recruit a 5* Moon Light Hero

The quickest and less resource consuming way players can get the recruitment system to open is to finish daily and weekly tasks for each week in addition to spending as much energy as possible. 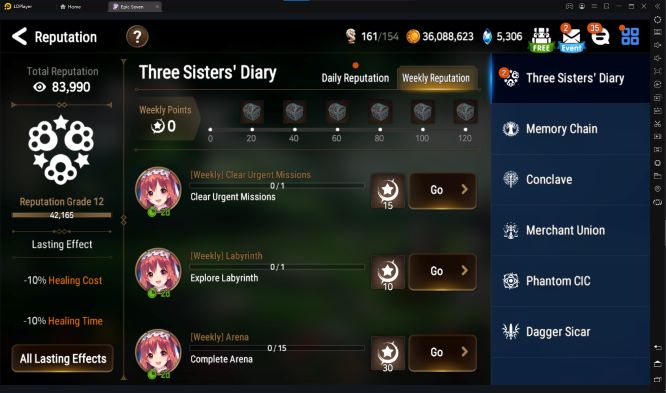 Each Daily Tasks are worth 50 points, each 100 energies spent are worth 5 points and if the player reaches 100 points for the Weekly tasks, they will be rewarded with 2800 points, therefore, the most surefire way to get there quickly is to clear weekly and daily tasks constantly. With this, within ~ 7 weeks, players will be able to recruit the hero of their choosing. 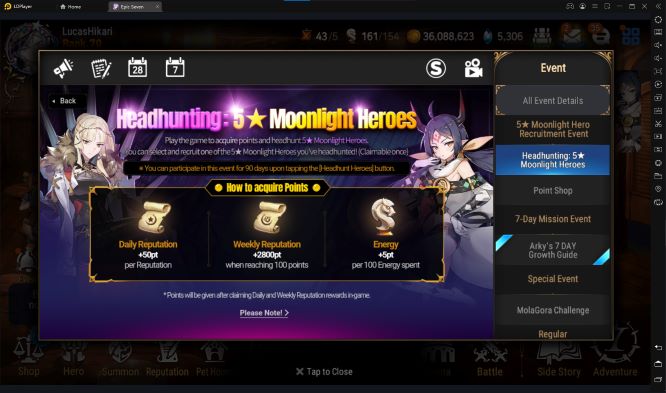 LDplayer is the most stable emulator to allow players to run Epic Seven smoothly, at high speed and high quality, and provides many amazing functions to help all players to have the perfect Epic Seven Gaming Experience. 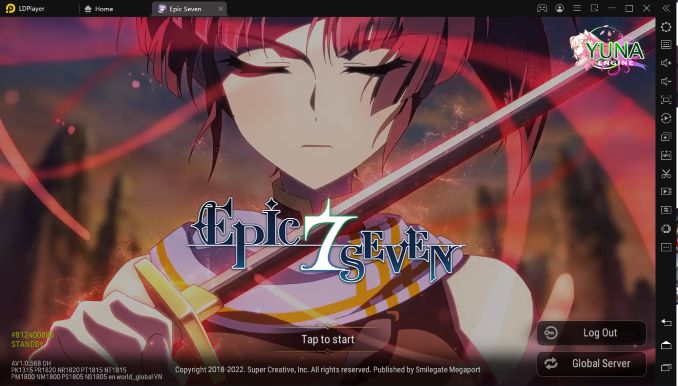