Cross Summoner R game is rich in many game modes that can make the players feel that they have entered into an unending maze filled with many gameplays. Since there are many things for the players to do here, they need a Cross Summoner R beginner guide to use as a ladder to progress faster in this game. 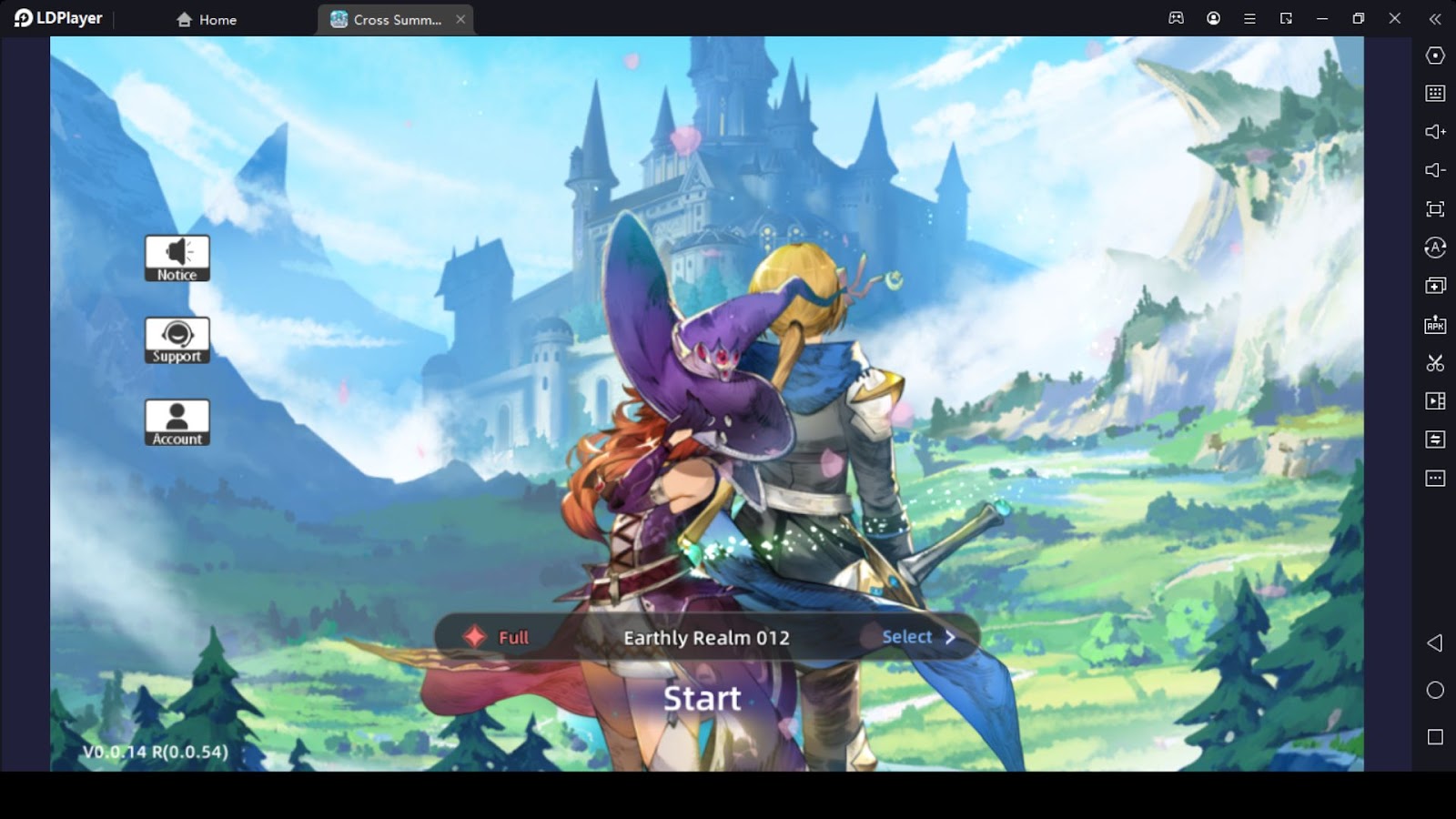 This game is a gacha Role-Playing Game (RPG) that the players can play freely. Like we said earlier, there are PVP (Player Versus Player) Arena battles and PvE (Player Versus Environment) modes such as campaign and adventure modes where the players can chill in unlimited actions using the heroes with unique skills and strengths. Therefore the probability of players losing track in the game will be higher, and as a solution for that, we brought you this Cross Summoner R beginner guide.

Once you have this beginner guide in your hands, there is nothing to worry about because every essential piece of information has been embedded in this Cross Summoner R beginner guide which will not let the players lose anymore. So, let us go and learn more about the game with this guide.

Before entering into battles, the players can select which characters they would like to dispatch for the match, and after choosing the main force, the players can enter into the battles with the troop they selected. And the players will be charged a certain amount of stamina (represented by hearts) to participate in fighting here.

Even before the process mentioned above, players must pay attention to several things when participating in a battle, such as the recommended power to participate in that battle, whether the level is easy, normal or hard etc. Taking part in a match without checking these things won't do good for you, so never forget this information.

Okay, now, let us talk about the battles here. The players can use the auto-battle option to make the fight happen automatically without any percentage of involvement of the player. The characters you choose here for the battles will act on their preferences. There are two rounds in each match, and the players have to clear the fight by draining all enemies' health in the given time in both games. 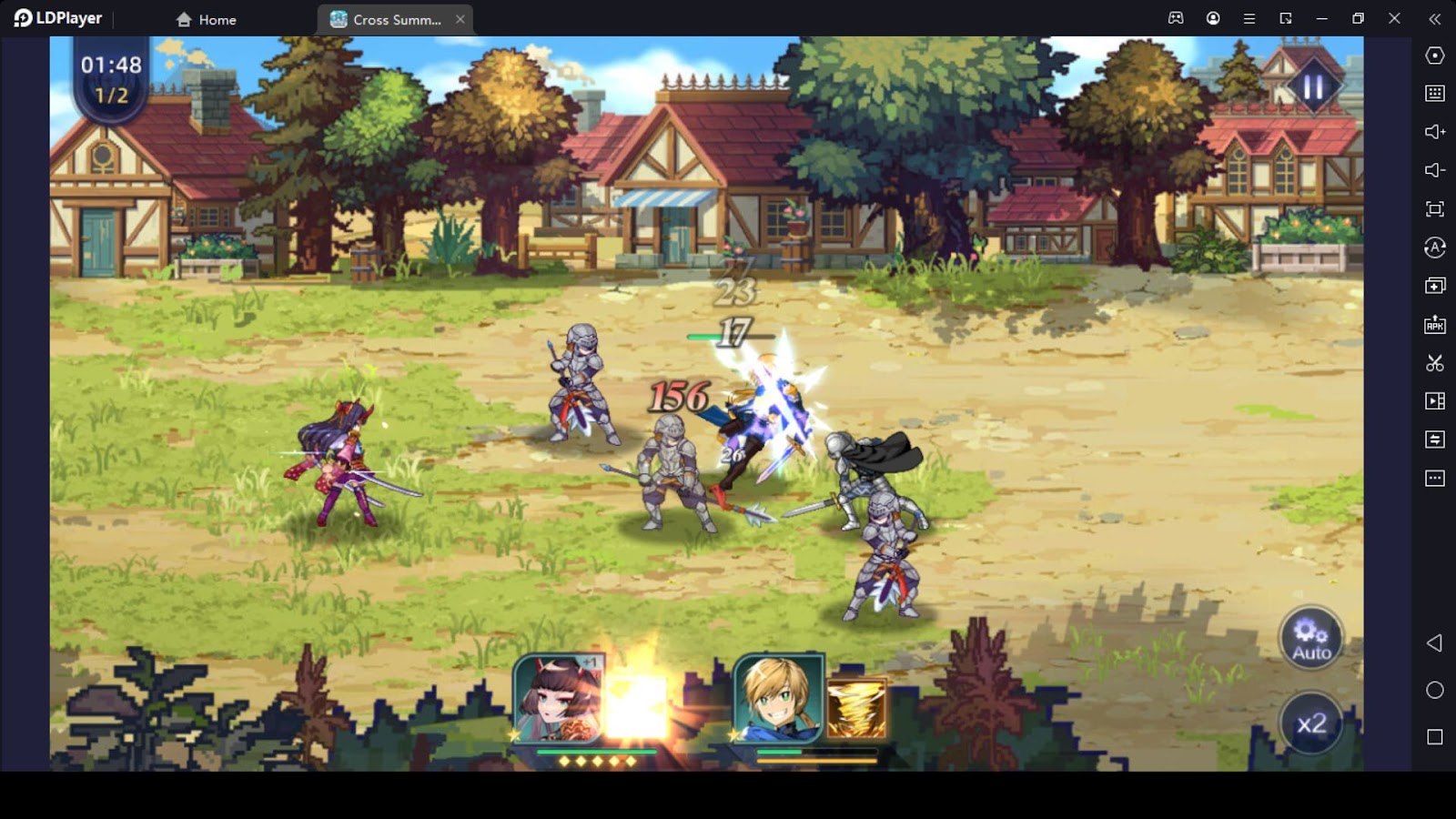 At the bottom of the screen, the players can see the avatars of the characters participating in the battle. Under their avatars, there are two bars in two colors as; the health bar in green color and the ultimate meter in yellow color.

Since you already know that the health bar shows each character's health, let us explain the ultimate bar. When the ultimate bar is filled with a particular character, they can activate their ultimate skill, which is powerful enough to cut down an enemy once and for all.

There are three summoning banners provided in the game Advanced, Basic and Limited Summoning and now, let us further check these banners. 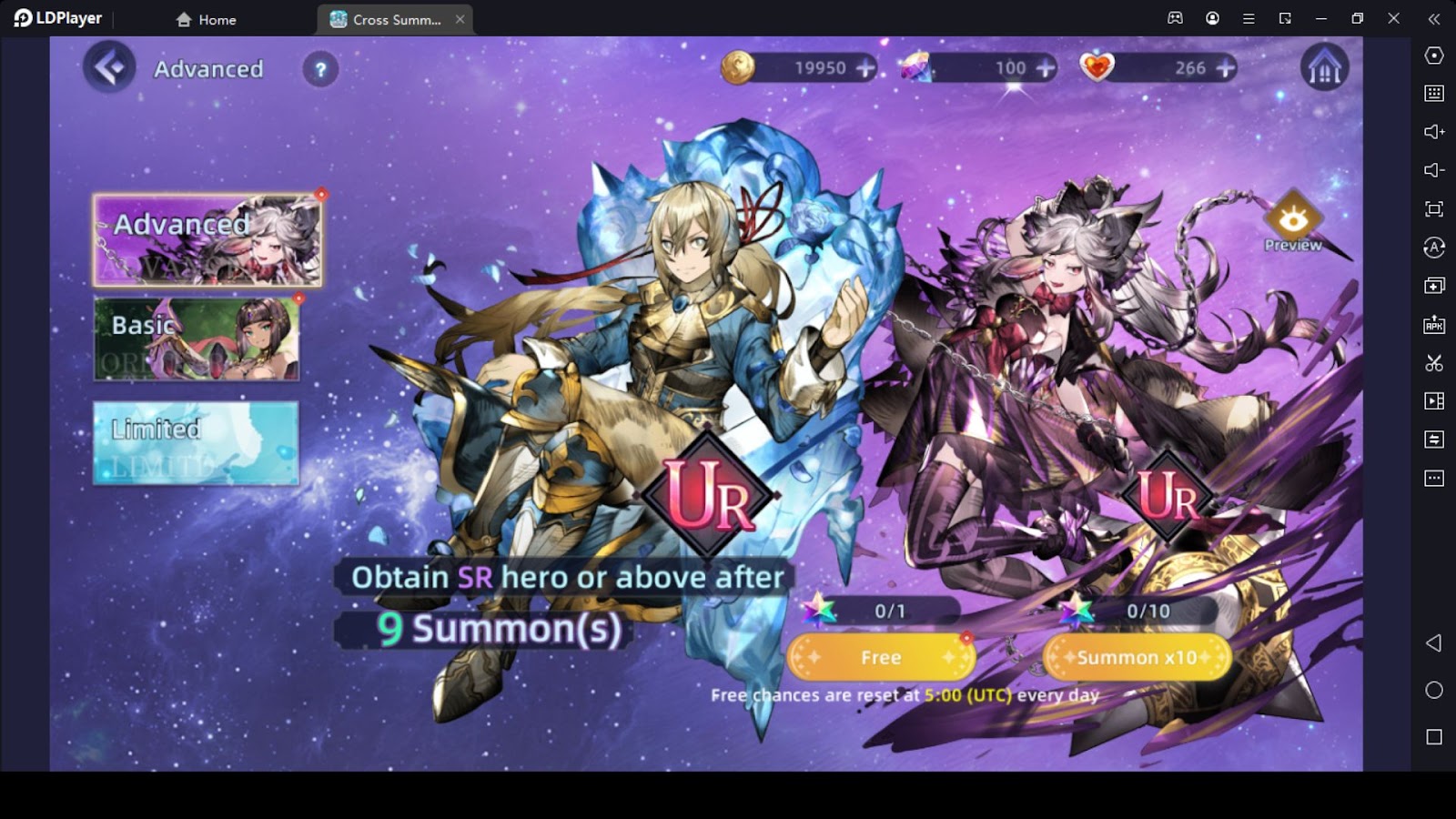 In the Basic Summon, the players have five free chances to summon one character freely; players can pull out ten characters at a time using a certain amount of basic summoning stones. It's good to do the free pulls that the game has given you, but we recommend collecting enough basic summoning stones and performing ten pulls at once to have SR characters. 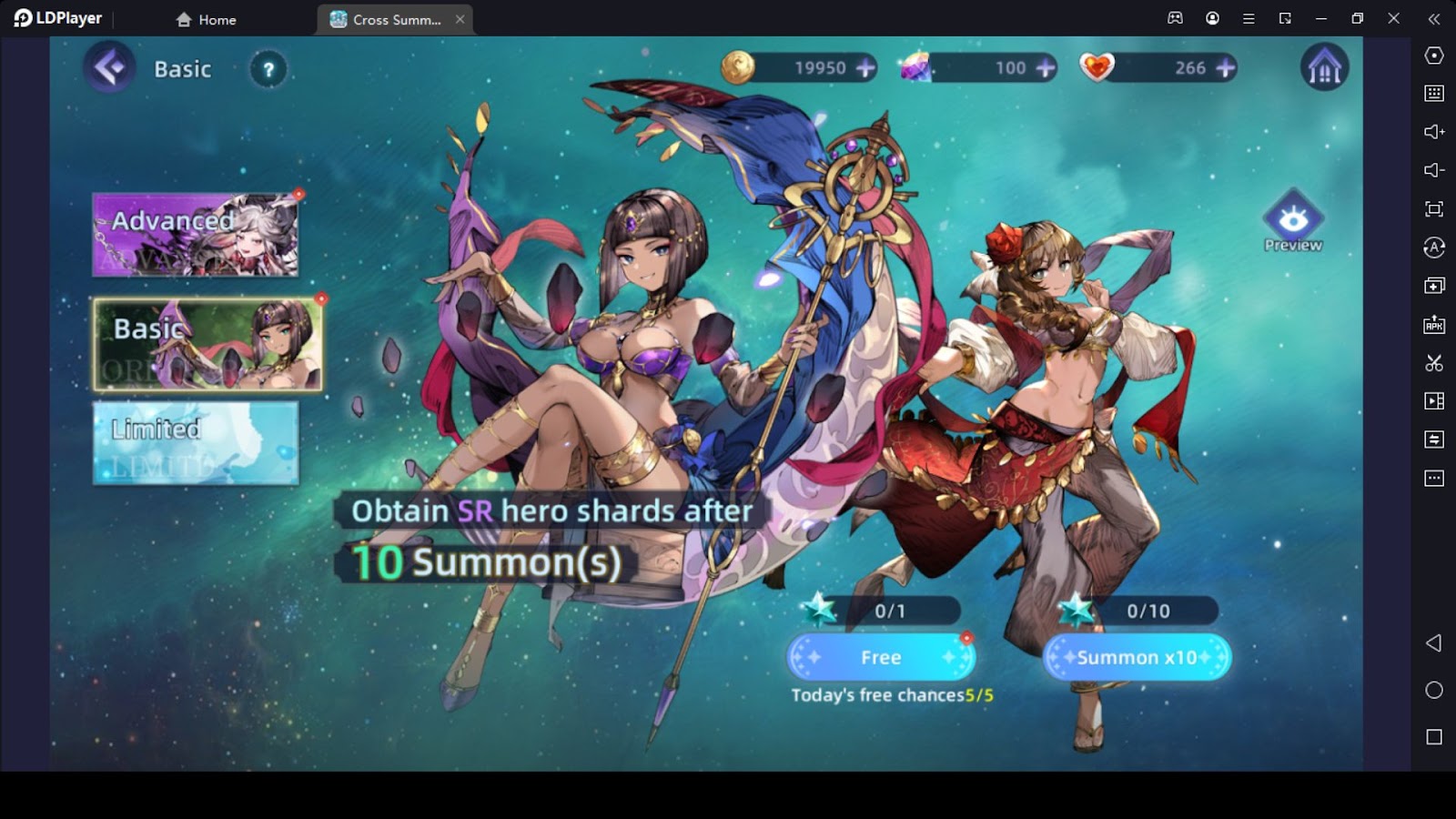 Limited Summoning Banner allows the players to perform ten summons at a time, and it guarantees to give the players 2 SSR characters for every ten pulls. 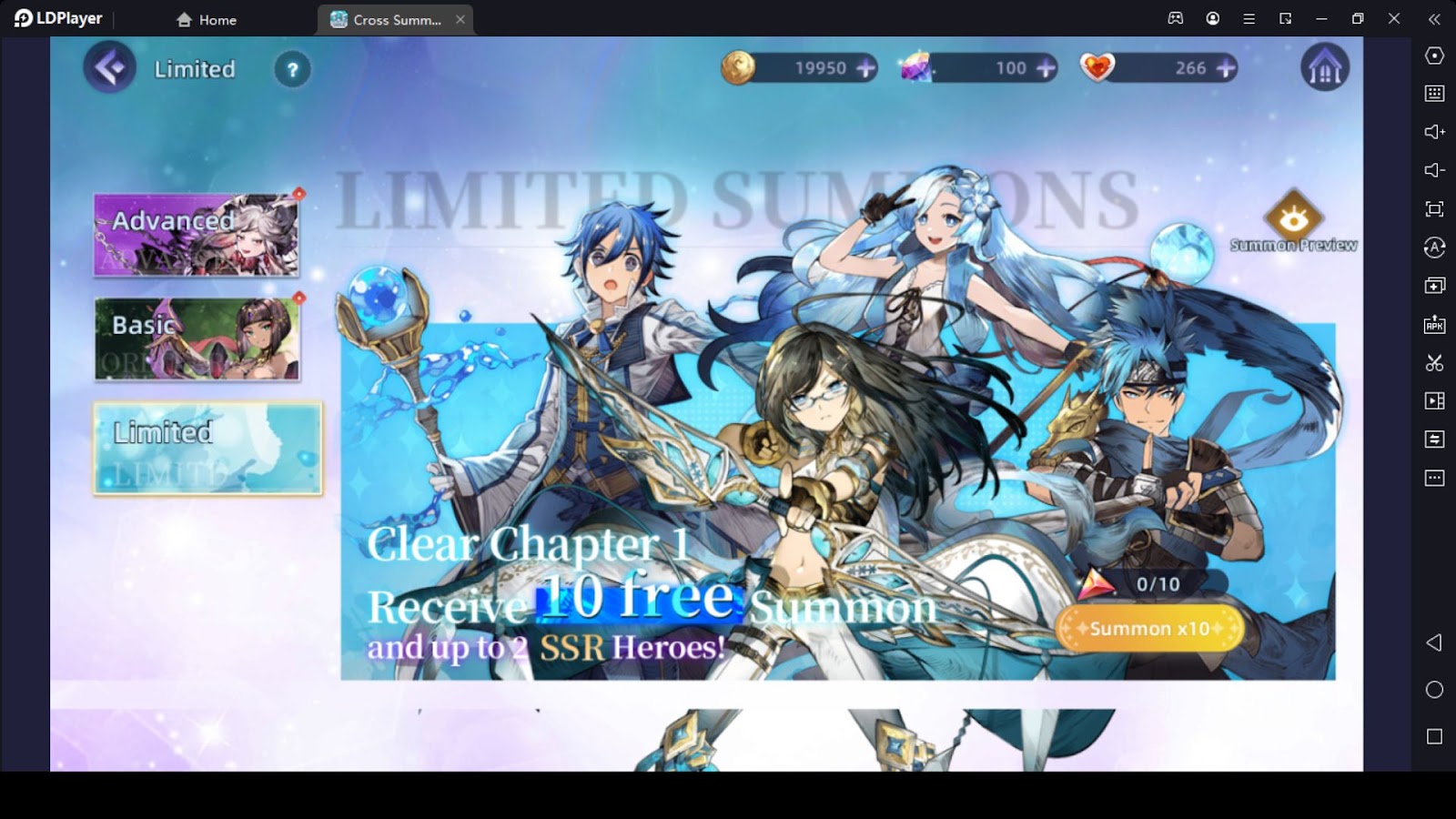 As we said earlier, even if you summon heroes using any of the banners mentioned above, there is no way you can guess the outcome, or you won't always get the best and most favorite ones. So, because of that, many players tend to reroll more often, but it will take a considerable amount of time for that process to complete.

Therefore, we recommend the players play this game with the best android emulator LDPlayer 9, which allows an easy rerolling process and a wide screen and many other tools to play this on PC, making the gameplay comfier.

The Multi-instance Sync tool in LDPlayer 9 allows the players to manage more than one in-game account by creating clones of the same game, and the players can perform the process or reroll easily without spending much time on it. You heard it correctly; now you can pull out your favorite higher-tier characters quickly and effectively by rerolling with the best android emulator LDPlayer 9. 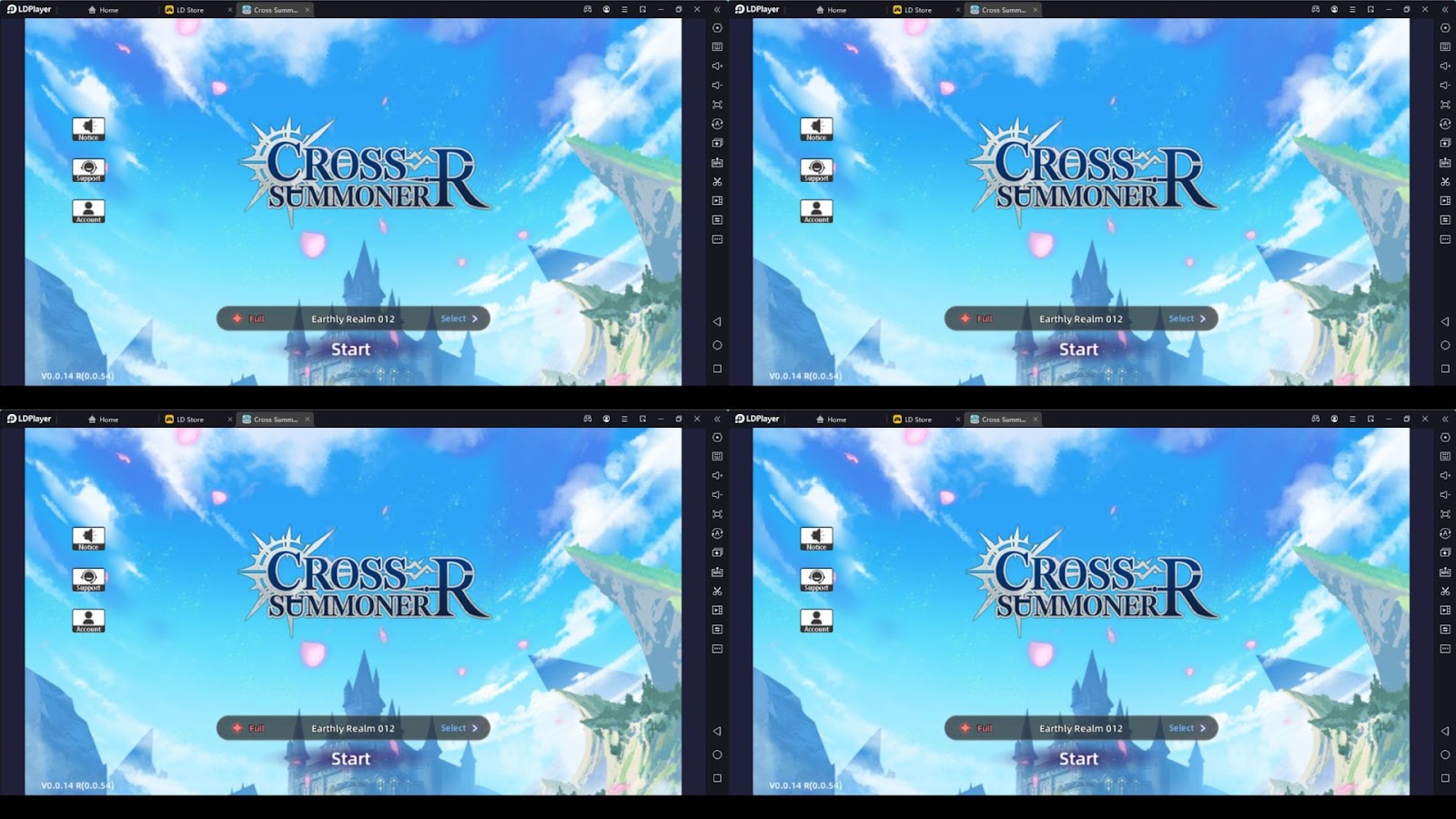 In this part of our Cross Summoner R beginner guide, we will explain the process of upgrading the heroes in this game.

Breakthrough can be used to advance the characters' different stats such as Physical Defense, Attack, Stamina, and Magical Defense. But to do that, players will need several resources that can be collected as battle rewards in this game.

Now, the players must find and collect those resources to perform breakthroughs in specific attributes. But the game has made it easy to find them just by clicking on the resource needed, and then it will show you at which stage you can obtain them. How crazy, isn't it? 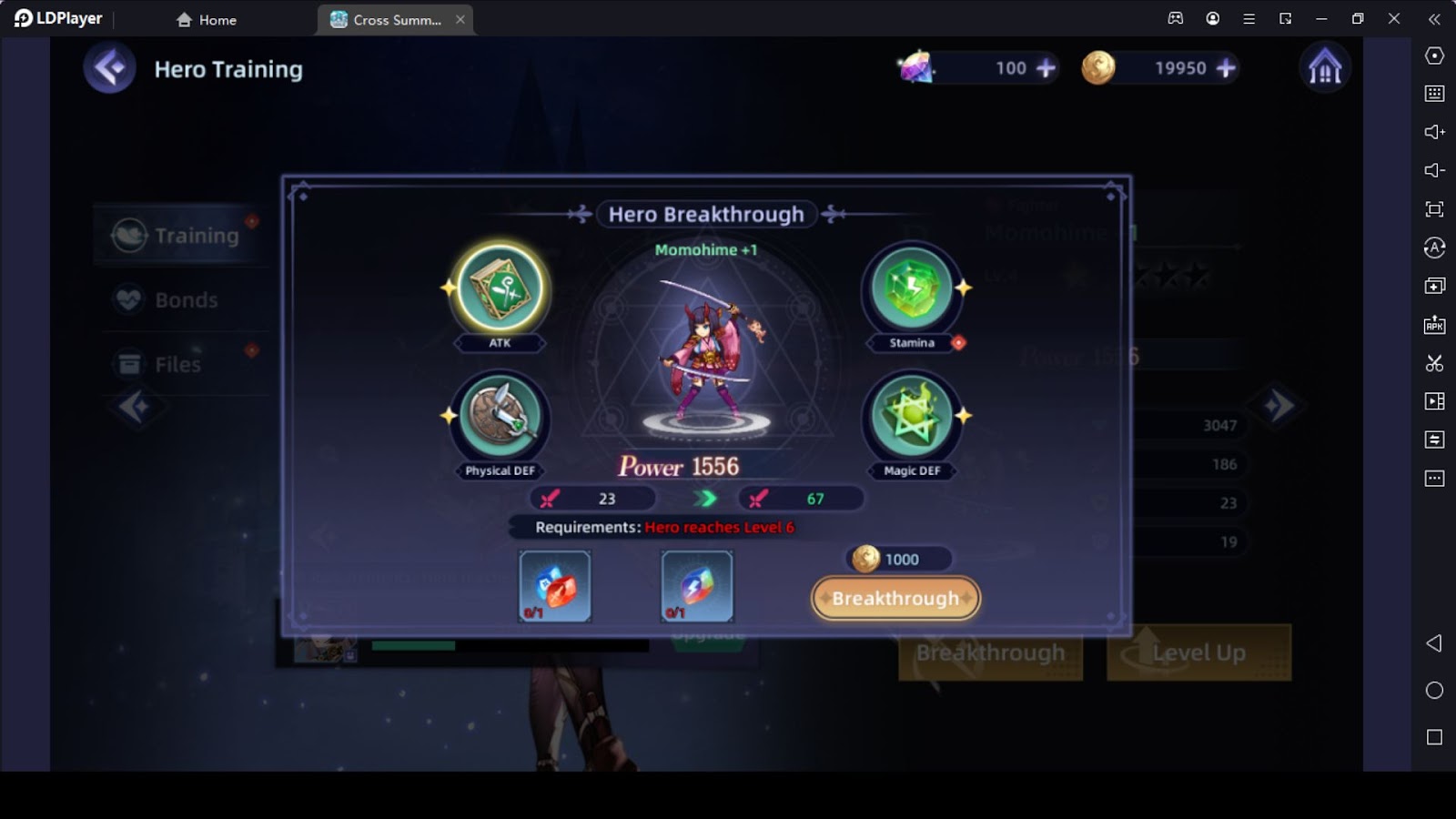 The following way of upgrading the characters is by leveling up, and through this, players can increase the characters' levels using the EXP (experience) Juice for specific attributes. Players can use these EXP juice to obtain the needed experience points to go to the character's next level. 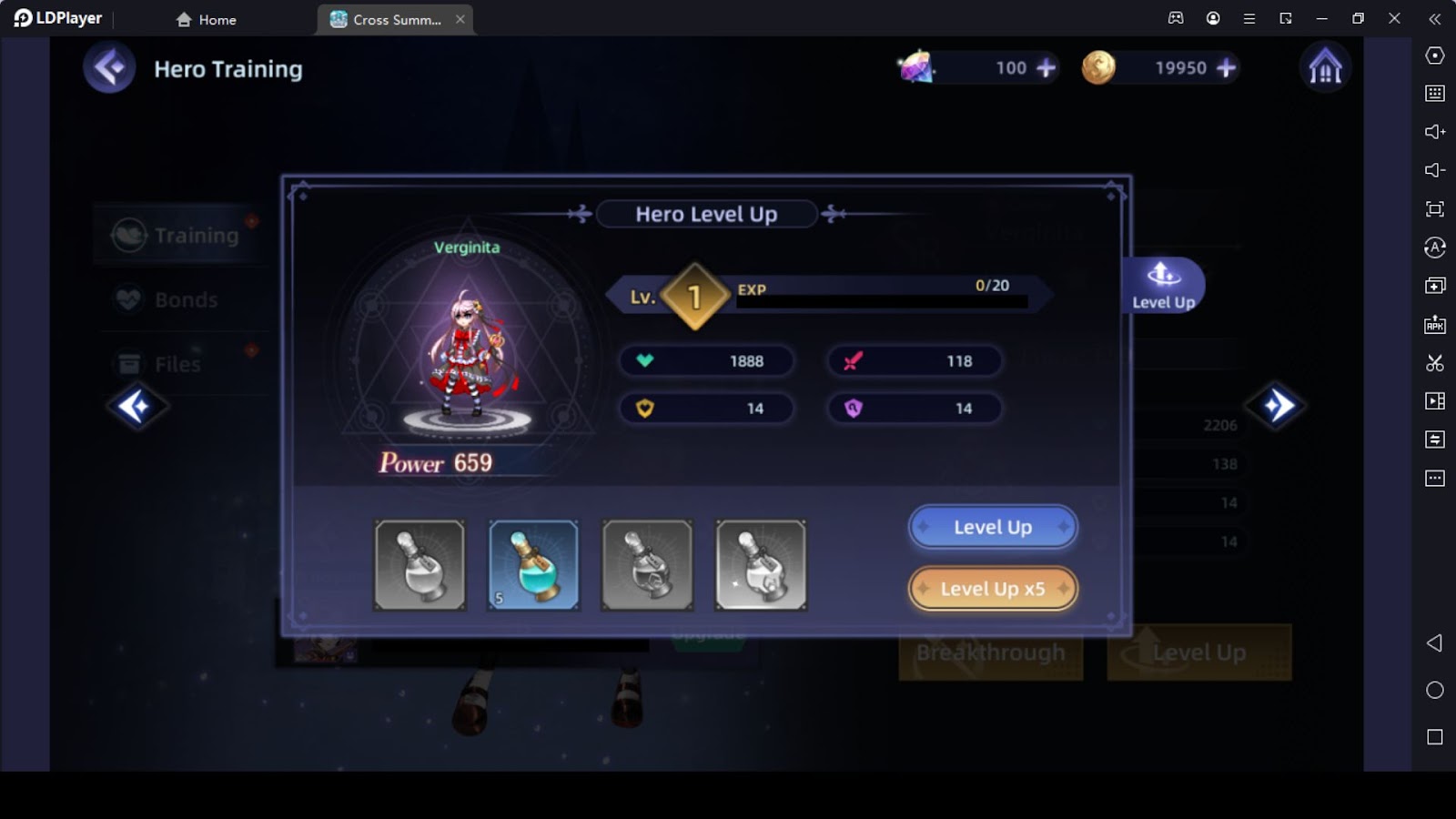 Gear upgrade is another way of upgrading and enhancing the characters' attributes; the players need gold to perform the gear upgrade. Make sure first to collect enough gold and then upgrade the gear pieces one by one.

What Is the Sweep Function?

The sweep Function is the feature that allows the players to regain the same rewards of a completed stage.

How Can I Use the Sweep Function?

What Are the Benefits of Using the Sweep Function?

Since it allows the players to recollect the same rewards in the already completed stages, if the player needs to collect a specific resource, it can be gathered easily with this function without engaging in battles again and again.

With this Cross Summoner R beginner guide, victory in all the battles you participate in will be guaranteed, and now, you are ready to take part in any battle as a full-fledged master in team handling. So, the only thing left is to start playing the game with LDPlayer 9, which millions of gamers trust.