Punishing Gray: Raven is the latest Action RPG game set in a futuristic world which relies heavily on fast-paced action, QTEs, and evasion to enter supercomputing space (slow-time mechanics) to unleash devastating combos, which has made fans compare it to Nier Automata. In this guide, we will discuss one of the best Healers in the game, Live Hope, which is the character that we all start with, which the game gives us for free. She should be a part of your core team whenever you play. She can swap in, group enemies together, and smack them with a big AoE attack. Liv has self-sustain as well, which is always handy to have a heal to use. To know more in detail about Punishing: Gray Raven, read our guides on the game.

The first thing to note with Liv is that she does pure physical damage because when you see her laser beams, your mind doesn't go towards thinking it is physical, but apparently, that's how the developers decided it is going to be.

You get a 5* weapon for her in the game called Guardian Mount from daily logins. This weapon is enough to carry your Liv through to the end-game until you decide to get her 6* weapon. Choose a weapon depending on the situation, DPS weapon for solo play while Support weapon when playing co-op.

You can use Patton for constant high CRIT rate and DMG, while Condelina increases basic ATK DMG. This build focuses on DPS build, so her healing will be less potent, but her DMG will be pretty decent at best. This is the Full DPS Build. Her main strength will be her self-sustain thus, increasing DMG will make her become a strong solo-ist.

Guinea for buffing elemental DMG + RES, Ferret for buffing PHY DMG + DEF. This build focuses solely on full support and relies more on QTE. Standard healing set, which can be very useful when playing on very hard content, like Border Contract. This is her full Support Build. Mixed build to get the best of both worlds, more potent healing, and decent DMG. Patton best to be used for increased overall DPS while either Guinea or Ferret increases your healing power, making her able to sustain more. Ferret is better recommended since Liv Hope's main damage is all PHY, so buffing her PHY DMG and DEF is preferable.

Bottom Slot – Upgrade her Passive Core if you wish for better solo play or QTE upgrade if you only use her for QTE heals.

Let’s look into her skills.

Red Orb – is the Laser Shot skill. Orders weapons to fire 1 laser shot, dealing 147% up to 441% (based on level) PHY DMG based on the number of pings.

One thing you can do when you swap in Liv, she immediately activates 3 pings of Black Hole, which you can activate to group enemies up, deal some tremendous damage, and leave you open for her core passive with which you can do some excellent AoE damage.

Blue Orb – Inconsistent Particle. Unleashes energy and knocks back nearby enemies, dealing up to 211.76% PHY DMG based on the number of Pings and healing nearby allies for up to 84.71% of Benediction’s Attack. PHY DMG increases by a maximum of 33.88% for 5 seconds. It’s got everything, DMG > knockback > healing > DMG increase. It's quite a nice ability when grouping all of this.

Beam Strike – is her basic attack in which she summons a laser beam to strike enemies doing PHY DMG.

Signature – Azure Starfall, her Ultimate move, she floats up and deals bombardment of attacks

Passives – Liv’s QTE is Nanofield Blossom, in which she flashes and jumps out and helps you by a heal and a shield. Support is the passive in which she heals are increased by 10%. Her Ultima Awaken passive skill gives her 3 Signal orbs when entering battle. Finally, her core passives are Laser Cluster, in which after any 3 Pings, the next Red orb skill will unleash a laser beam that deals a bunch of PHY DMG. 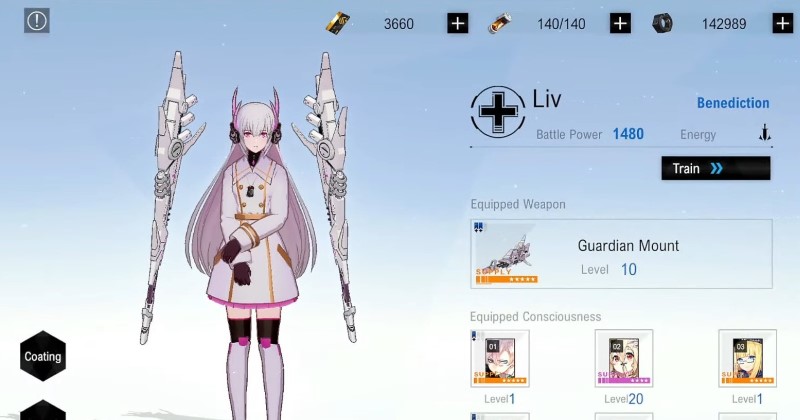 This is the same core passive as Lucia, where you want to do a 3 Ping into the Red to get some good damage which is really lovely. This helps you swap between two characters because, especially with her, when you swap in against an AoE situation, she can group them all up if they're close and then into the Red Ping, which does massive AoE damage.

Live Hope isn’t used much in Warzone, even though she is viable due to the intense need for high DMG against a large crowd of enemy waves. Healing is also not needed here that much unless you need that extra protection with her barrier.

If you do need to use her as your primary DD for Warzone, then the PHY area warzone is her ideal Weather to score high.

Liv Hope in Pain Cage is mainly used for her QTE heals to other main DD units making her a support structure in this case. As her DMG type is all PHY, Roland is the Boss best suited to her DMG and playstyle. She can perform reasonably well for the rest of the bosses but can do mediocre or minimum scores.

Live Hope shines in this mode since you can play her well solo in this mode, and she can deal consistent damage while sustaining her HP at the same time. Don't worry about the CP requirements in these stages, as you can clear the 6k CP requirement with only 2.5k CP units.

Liv Hope can perform really well here because she can play solo while self-sustaining. Just equip her well when tackling this mode. Liv Hope attacks with her weapon, the Guardian Mount, which are 2 laser guns on each side of her that are floating and firing while being levitated in the air. While her first two attacks deal single target damage, her 3rd attack in the combo does AoE damage every time. Doing 3 Red Pings is her forte, but you can combine 3 orbs of any color and combine it with 1 Orb of Red to do the same.

We are always aware of the first 3 orbs we get whenever Liv enters the battle. For example, we can start with a Blue buff and use the 3 Red Ping, which activates her massive Laser barrage doing AoE damage. When we do something similar with the Yellow orb, it summons the Black Hole.

It would help if you made basic attacks until you have 3 Red Pings in your hand before you go pop in your skill. You can do the same with any of the other skills. You can combo your skills together depending on the orbs in your hand. The best combo you can do is group enemies together with Black Hole and adding skills on top to deal damages.

If you have a single enemy like mini-bosses or Bosses, you can activate your buff first and add other skills on top of it to rack more combos. If enemies group her up, you can use the Blue orb skill to knock them back and start with your combos. You can read 7 Best Combat Mechanics Tips and Tricks to learn in detail about combat mechanics and supercomputing space to utilize Liv to her best.

As soon as she swaps, she can use her Vortex/Black Hole to group enemies together for other follow-up skills or can swap your 3rd Raven to use their skills to damage.

In the pic below, you can see that when you dodge the enemy attack at the right time, all your orbs are illuminated, which allows us to use our skills in Supercomputing space and rack up your combos quickly. One thing to always keep note of is, with every AA, you get one orb, though each orb is random, and you have to be on your toes to unleash your combos when the time is right. One bad situation that you may find her in is where she is in a fight without a skill orb or combo and have to rely on her AA. In the case this happens, you swap in your DPS or Tank to avert the situation. The endpoint of this comparison shows us that both healers are equipped for different roles and different scenarios so that a direct comparison wouldn't get us anywhere; for example, Bera can be used with elemental teams while Liv goes well with most teams, but Bera excels where melee DMG and speed is required while Liv works best at range and tanking the Boss or supporting her teammates.

To know more about Live Hope, Bera Rose, and Other Characters in the Punishing: Gray Raven, read our Tier List guide.

Punishing: Gray Raven is a fast-paced hack and Slash ARPG having amazing graphics and complex gameplay mechanics that involve a lot of QTEs and combos along with lots of dodging. The game becomes so chaotic at times that you need to set up a macro to use your skills in quick succession to stay on top and score high. The AA combo mashing is best done when you are playing with a controller instead of a keyboard and mouse or even your touch screen. You have to utilize the best features at your disposal to enjoy one of the best games on mobile.

Live Hope is definitely one of the best healers in the game and a great one at that. She can heal for a significant amount with added barrier effect to help your allies sustain longer plus buff damage based on equipped memories. On top of that, she can self-sustain and deal with decent DMG by herself, to the point she becomes unkillable when built right. Overall an excellent S rank Structure worth getting and invest in.