Shadow Fight 3: Pro Tips To Get You Better At The Game Shadow Fight 3 is an RPG 1 one fighter developed by NEKKI Studios. The world is on the edge of war, and three factions known as the Legion, Dynasty, and Heralds want to control the world. You are tasked with creating your own customized hero that can change the tide of battle.

The game features three unique fighting styles exclusive to the factions that you must learn and master. Moreover, it has regular themed events with gorgeous cinematics that keep you hooked. It also has a ranked match-making system that you can play to get on your region's top 100 leaderboards!

The Brawler is known for its strategic and fast-paced combat. The unique combination of skills and factions adds an element of depth to the game. With the addition of customization and themed events, the competition is increasing in popularity every day.

Factions are an essential part of the gameplay in Shadow Fight 3. Unlike traditional classes in MMORPG games where a class can only do a particular task, factions in Shadow Fight 3 are downright unable to perform specific mechanics. For example, the Legionnaire class, even though it has high HPS, has a few caveats you should always look out for. The Legionnaire Class cannot wall jump in Shadow Fight 3. This skill is reserved only for Dynastians and Heralds. So, if you are playing one, you should stop trying and try to stay in the middle of the arena where you have a more significant advantage. However, if you are playing against one, you should try to hug corners and walls and dodge heavy attacks by wall jumping.

Shadow Fight 3 is a game that demands much mechanical skill. It has a few nuanced control schemes and moves lists that are pivotal to understanding the game. One of these features is the Dash In and Dash Out feature.

You can use this feature by tapping your D-Pad or Joystick twice for the front dash and then the back button quickly to dash in and get around. The advantages of Dashing cannot be taken lightly. Firstly, it allows you to traverse large distances with no issues and get behind your opponent with ease. Secondly, you can dodge incoming attacks and quickly initiate a counterattack by dashing.

Lastly, you should try to get around your opponent and then use a move instantly. This will put you in range to make the next move and makes it very hard to predict and can even beat AI's and more experienced players in more formidable difficulties.

Learn all your Combos:

There are various weapons you can equip in Shadow Fight 3. With all these weapons, you have the option of incorporating them into a class of your choice. Moreover, with all of these different combos, there are individual unarmed styles of fighting that you can add to your arsenal of moves.

In turn, this indicates that there are a lot of different new ways to play the game. So, more experienced players can pick up on your style and instantly draft a counter style using their superior knowledge of the game. So, you should spend a lot of time practicing new weapons and learning new combos in the Training Room. It will help you immensely.

You should also note that Events become much easier once you learn Unarmed combat, which is just another bonus.

Understand Armor, Perks, and Base Stats:

Every character is unique in this Brawler. So, there are specific stats and perks that you should look out for when facing off against an enemy. These are the stats in no particular order:

Suppose you understand these particular stats and what they entail for the character your facing off against. In that case, you should have a much easier time brawling with them and can defend and attack accordingly.

Aim For The Head: Head Hits have a chance to Trigger a critical. Avoiding these hits is crucial to you winning the fight. If you get hit on the head, you will get a Shock effect on you. A shock effect will always drop your weapon down. Throws can also be used to add the Shock effect. Criticals are used to lower the enemy's guard and take off a chunk of their health.

Play on Impossible or Insane Difficulty:

Unlike MMORPGs, this game is not about grinding stats or resources. The only thing that matters here is your pure skill. So, getting better at understanding attacks and combos is the best way for you to beat real-life players. As finding competitive matches for practice can lead to losing your Elo points fast, we recommend that you play the game on the Impossible or Insane Difficulty.

Furthermore, trying out your combos and defeating enemies with various weapons can help you beat players in the competitive game mode as well. It never hurts to study the different fighting styles the AI uses, as it might help counter a particularly nasty combo later on.

Upgrade Your Gear – Forget About Rarities: 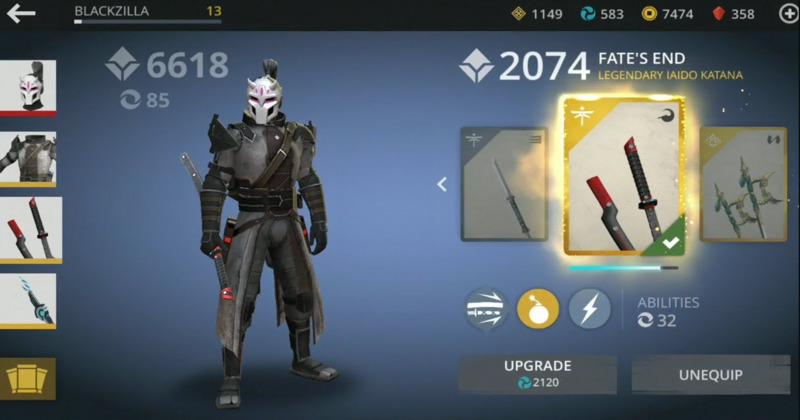 We recommend that you play Duels to get Chest and Coins. After that, you should start completing side missions for Gear. You can also watch the in-game ads for Gear. After you get your gold and Gear, we recommend that you start upgrading your Gear without paying heed to its rarity. As rarity is not as crucial in Shadow Fight 3 against raw stats, you can upgrade common Rarity items and still get very decent weapons.

Shadow Fight 3 is one of the best one on one brawlers in the world. It features unique mechanics and characters that are based solely on mechanical skills. So, the more time you put into the game, the better you get at it.

There is a well-made AI system in the game as well. So, you can use the AI's guidance as a tool to understand how it blocks your move and repeating the same stats once you are on the opposite end. While ranking up in this game is considerably more challenging than others, by using these tips and with a little bit of practice, you can surely make it work.