Summoners War: Lost Centuria has been out for a few weeks, and it has a completely revamped Rune System as compared to previous iterations of the Summoners War. As such, here’s a complete detailed, comprehensive guide about Runes that should help you get started on the game. If you haven’t already, you can download Summoners War Lost Centuria for free on LDPlayer.

In this guide, we’re only going to be covering the first basic runes that you can get before you hit level 7. The reason for that is most players who are newer to the game have still not gotten to a point in the game where they can get more than these runes. Plus, it is important to establish a baseline for runes before we move onto more advanced sets.

We’ll definitely be covering more detailed sets as time goes on and more players start hitting high-level runes as well. We’ve also covered a detailed tips and tricks guide for Summoners War Lost Centuria that should help you get started.

Here are the guides we’re going to be talking about:

So, without further ado, let us talk about all these runes in detail, starting off with the more Defensive Runes. 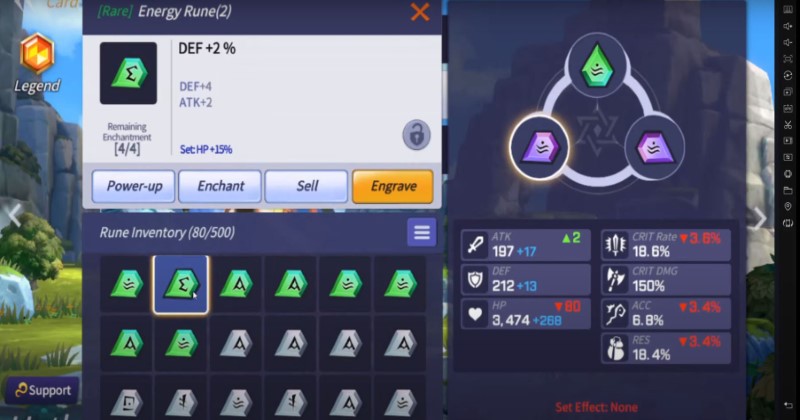 These are quite great runes. However, currently, players prefer Guard over Energy just because tons of characters in the game are more hindered by Defense rather than raw HP. Most characters who deal PHYS-based damage have their damage reduced by a huge amount with the Defense stat. Therefore, going for guard generally makes more sense.

HP is great to have, and you can run it on everything. It works on almost every character. You should definitely run these on characters that scale with HP. You should also test them out with dot characters since they will do a certain percentage of damage to your enemy's health.

You should also use HP on healers, too, since they are quite powerful on them because healers are generally squishy. 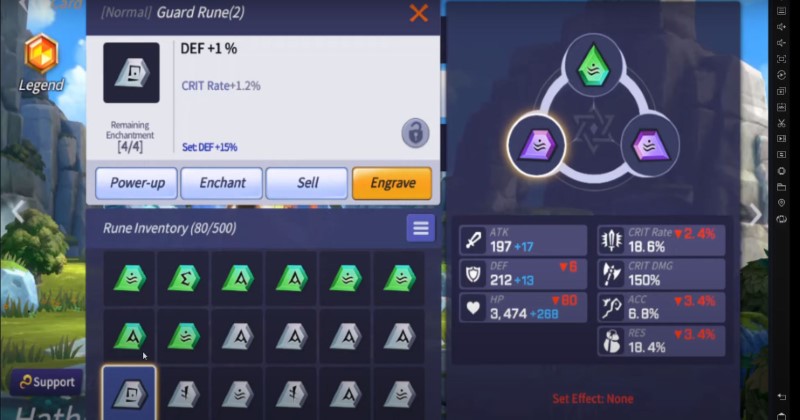 For a couple of defensive heroes, we recommend going for the Normal Guard Rune 2 instead since it provides you with a Crit Rate, which scales with a couple of characters. 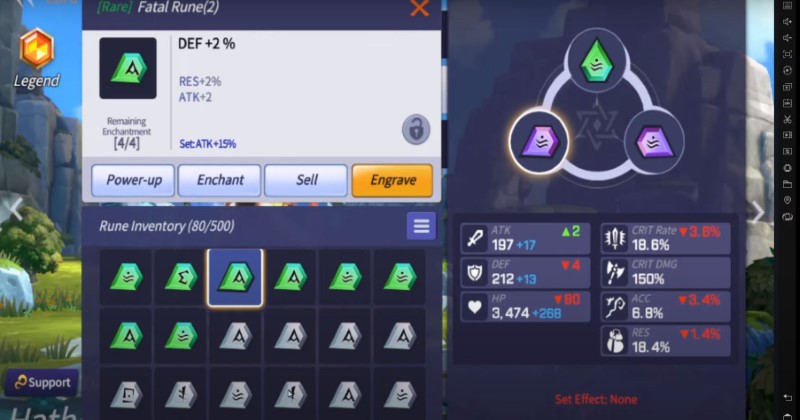 Now onto the more offensive runes in the game. We have two runes are particular that are extremely powerful:

Blade Runs are generally believed to be superior in every fact. The characters you should use these on are Assassins. Crit Rate, especially in the early game, is so hard to come by. So, the blade might be a future rune to run as well. However, Fatal is still quite good as well, especially if you end up getting sub-stats for the rune. But, the blade is just extremely powerful. 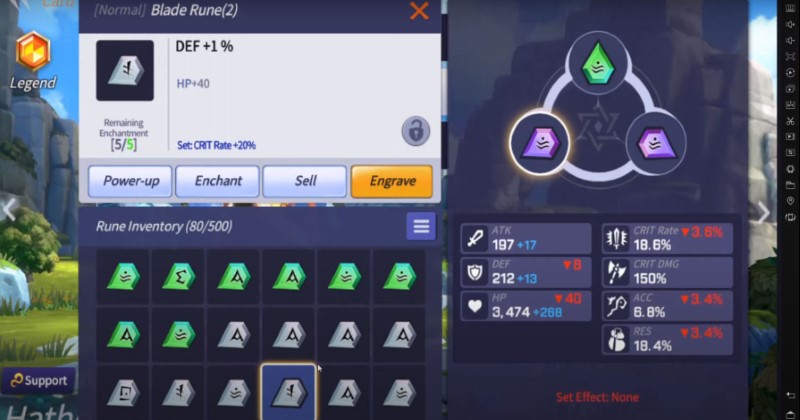 With Crit being so hard to come by, it makes your team so much more volatile and increases the overall DPS of your team, especially in end-game PvP. So, Crit as a stat itself is extremely powerful and cannot be ignored. 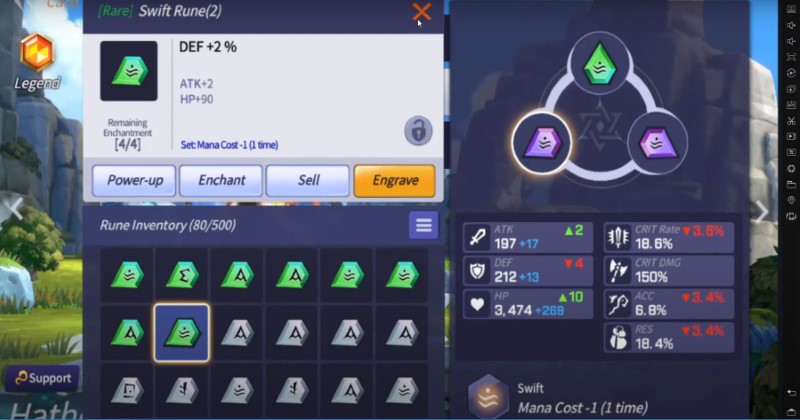 Swift is going to be providing you with Mana Cost -1 (for one time.) This is an extremely good effect, especially if you have multiple characters running on Swift. You are going to have a mana advantage against the enemy team. Characters that we are definitely running Swift on are Bernard, Meghan, and some support characters as well. You can almost run any character on Swift just due to the fact that it gives you such an advantage.

However, if you are not able to capitalize that, some of the runes like Energy and base stat runes become better. We prefer going for base stats over Swift a little bit. But, if you have good sub-stats. 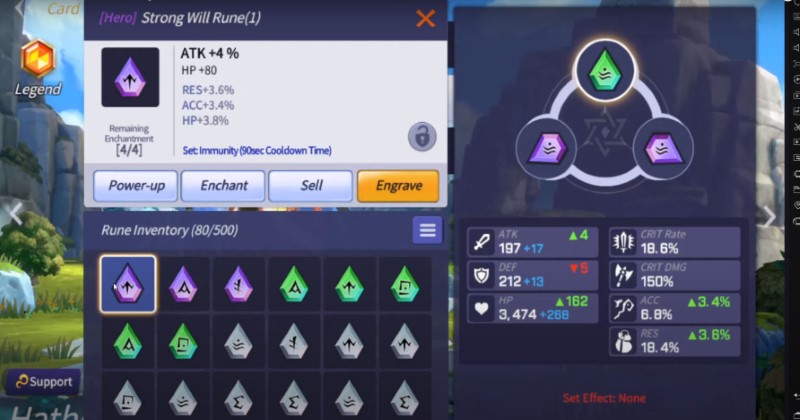 It Will provides you with Immunity with a 90-second cooldown. We don’t see a lot of people using the rune right now, probably because they have better runes. The rune does not really scale well in the current meta. This rune may be able to run on some Defensive System, especially if you have a DOT DPS team. Definitely consider running this to provide your team with some more sustainability.

If you have never played a Summoner War game, here’s a quick overview of substations are. What's directly under the main stat of the rune is known as an Implicit State while every Normal rune has one sub-stat, Rare runes have two sub-stats, and Hero runes have three sub-stats.

Instead of leveling up a rune, you can now enchant a rune which adds power to the rune. A legendary will have four sub-stats once you upgrade it. Enchanting adds value to each sub stat. You can do about four enchantments per rune. When you upgrade runes, you do not really get that much of a benefit out of doing so.

In most cases, it is not even worth leveling up in the early game. You should focus on enchanting instead. The remaining enchantments are relatively random, with certain runes having more enchantments than others. There is no set reason as to why a particular rune has a higher chance.

You should invest in runes that have 5-6 enchantments as they present you with a higher chance of getting better sub-stats.

For assassins, you should get a Crit Rate or an HP % substat just so that you can stay in the game for much longer. As far as supports, depending on what they need in terms of their stats, you can go for anything like Accuracy or Crit Rate. In most cases, each rune's sub-stats and which you apply it on is entirely dependent on personal choice and RNG.

As mentioned earlier, each rune that you get has a certain nuance that makes sense to a particular champion. You might end up getting lucky and get exactly the sub stat you want, or you might miss out and not get a lot of value out of your enchantments.

In any case, understanding the best place where a particular rune can be used is the name of the game, as it helps you identify what particular aspects of the hero you should be focusing on once you have a certain rune equipped. For example, if you have a rune that increases Crit Rate, you should probably be giving it to a hero who deals damage and has high DPS rather than a support class.

LDPlayer's exclusive options help take your gameplay to the absolute next level. You can also use the emulator’s multi-instance and synchronizer feature to make multiple accounts at the same and make re-rolling easier.

That’s everything you needed to know about runes for Summoners War Lost Centuria. With more nuanced mechanics and a bigger reliance on RNG, the strategy now matters more than ever! With this guide, you should be able to conclusively understand the Rune system and get the hang of what heroes each rune is meant for. How to Level Up Faster in Summoners War Lost Centuria