Romancing SaGa Re UniverSe Beginner Guide for a Starter

Role Playing is very popular and available in today's gaming world. But in this guide, we will show you one of the best games in the RPG world with more fabulous reviews. That is Romancing SaGa Re UniverSe . This is an RPG based on turns and this game has more than twenty-five million downloads. 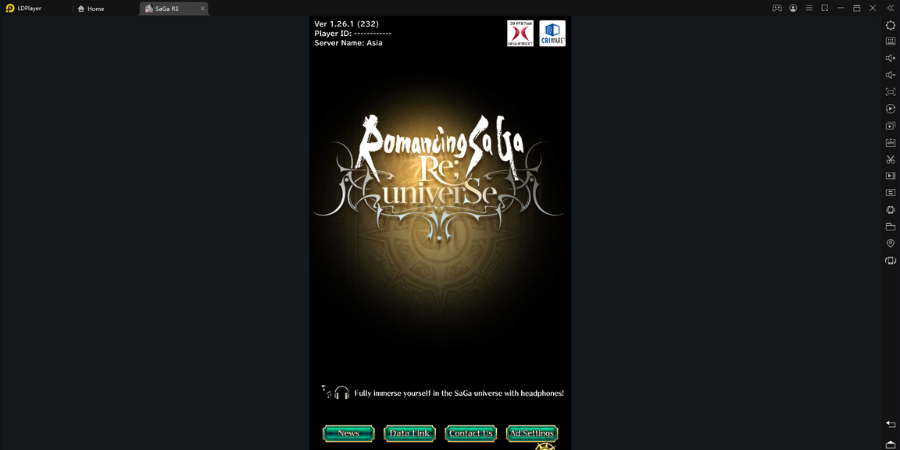 Romancing SaGa Re UniverSe is a free game to play, and it only comes in a single-player mode. When you play this game, you will discover how beautiful and satisfying the game story is. You can collect many colorful characters with extraordinary battle skills . It's not a game, just like other games. It's unique and has unique in-game content.

As we mentioned above, it is unnecessary to pay for winning battles. Instead, you can enjoy the game freely. This Romancing SaGa Re UniverSe guide will show you many tricks to use as a beginner in this game. This is full of challenges. You must use your mind carefully to achieve victory here, as this is a strategy-based game. And this game comes with an auto-combat system as well as a manual too. You have the right to customize the heroes you obtain here as you wish . Let's find the tricks to use when you play Romancing SaGa Re UniverSe.

Start the Game With the Rarest Characters

When you play this game, you need to have good patience to win because, as we told you earlier, it's so hard. But the more challenging the game, the more interesting the game becomes. We'll let you know about heroes through this Romancing SaGa Re UniverSe guide.

With or without characters from the rarest grades, you can clear the main story to some extent. But, if you have the characters with the most occasional grades, it will be easy for you. The best of the hero tiers or grades is the S tier.

There are many personified characters with eye-catching performances here. You are likely to get lost among these beautiful heroes failing to decide which one to use. Just the characters with the rarest grades are the most important. In this game, it's best to have characters in S Tier.

Romancing SaGa Re UniverSe pushes you to a tutorial period when you first begin the game. During that period, you cannot explore freely in the game. You can do only the things the tutorial tells you to do. After you are done with the tutorial, you can go to the summons in the game menu and get heroes with the tickets and gems the game has provided to you. If you are okay with the hero you got through the summoning, go ahead. If not, you can reroll. Reroll means creating a new gaming account and starting over. There are different summoning banners you can use here Platinum summoning tickets (that have the most probability of getting S characters), daily summons ( probably nothing), etc. 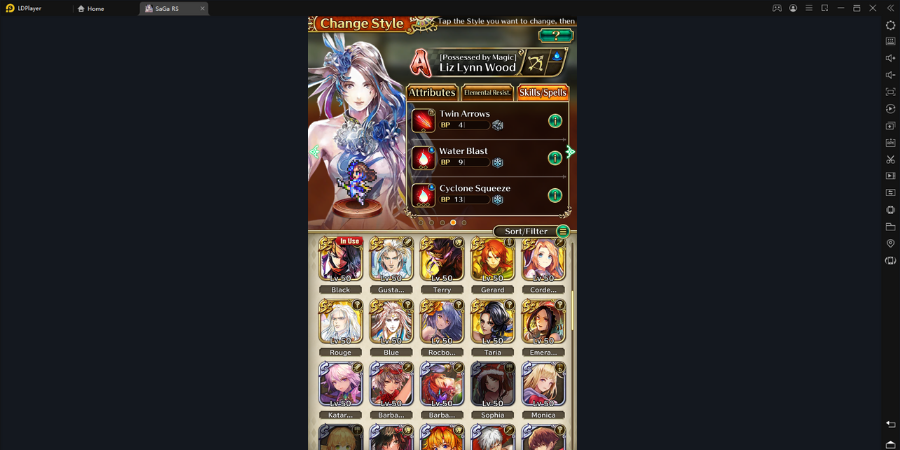 It will not be easy to earn these super characters through the usual summoning system as it takes some time and is not making sure to earn your wanted hero. So if time taking is a huge issue for you, we can recommend you the best emulator: LDPlayer. It is the best option for time-efficient rerolling as it can create clones of your game to perform rerolls on each. And the Multi-Instance Sync feature to save your time here.

Progress Through the Main Quest

In this Romancing SaGa Re UniverSe guide , we will tell you about the main quest in this game. As a beginner to this game, your priority must be the main story. You will have many side quests, but most important is clearing the main quest . You will know the game well when you go through the main level. And another importance of removing the main quest is that you can gain the basic things needed to upgrade your heroes for better ones.

What is your viewpoint of this main story? Is it full of danger? It's not, actually. It's not like how you think it is because the main story has more skippable stories rather than fighting. When you read these stories, you will earn gems . 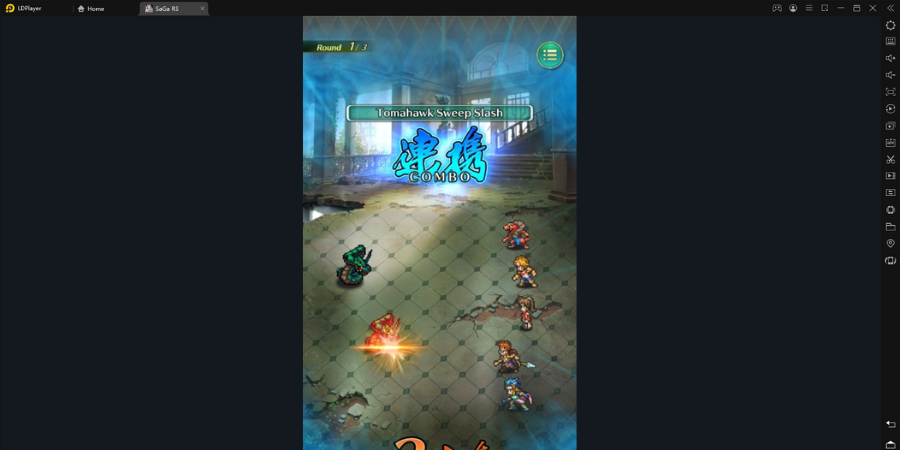 As we told above, you will meet many, many, many characters in this Romancing SaGa Re UniverSe game, and those characters have different styles, grades, and different abilities. When choosing the leading team's characters, always try to attract the best of the best. Don't waste your in-game currencies or your valuable time on useless characters.

When choosing characters for the team, there are many more things to consider than their performance. You should consider the class, tier, and style of the character. To do that, you must check the stats of all the characters available. Make sure you choose the rarest characters with the highest resistance and attacking abilities. You can choose the hero role as an attacker, jammer, defender, or supporter.

Let's see the characteristics of each job role in this Romancing SaGa Re UniverSe game we mentioned above.

When you build your team, we recommend choosing an attacker as the hero and keeping characters in each job role in your group. 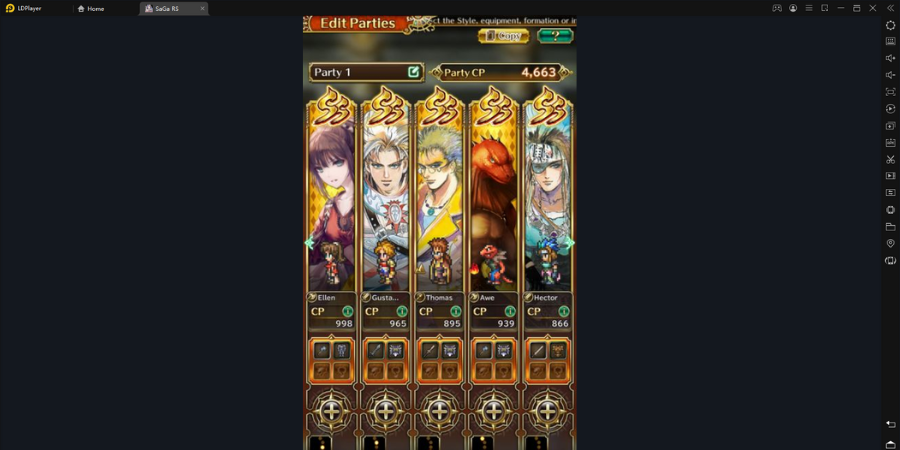 Be Selective When Enhancing Your Heroes

When you use your heroes in combat and training, they won't be level up. But when you use them in battles, they will receive experience points (EXP) that help them level up. It would be magnificent if you concentrated on your leading team more. Because when they participate in battles, they will earn more EXP that can be used to level up their styles. So focus on enhancing your main team heroes as soon as possible. 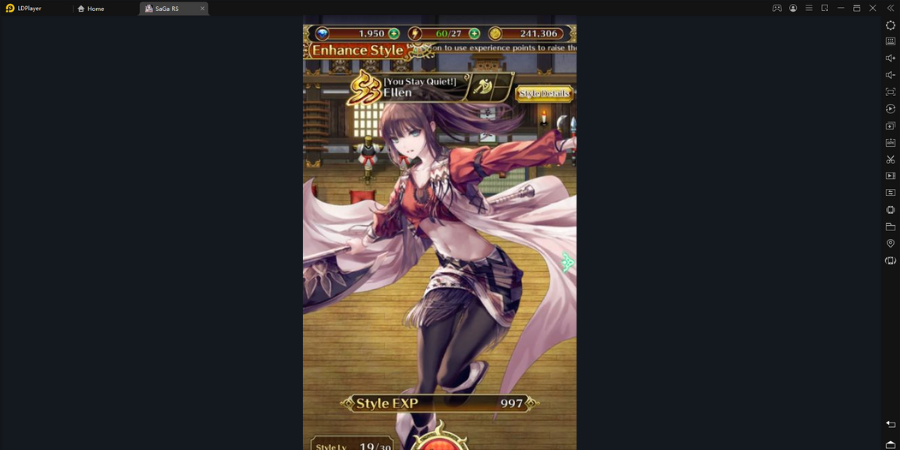 We can assume how vital these equipment are by looking at their rarities. In most RPGs, the strength of the hero is not decided only by its stats but by the stats of the equipment the hero uses. In this Romancing SaGa Re UniverSe game, the more you upgrade the gears, armors, and weapons the heroes use, the more powerful your heroes become. 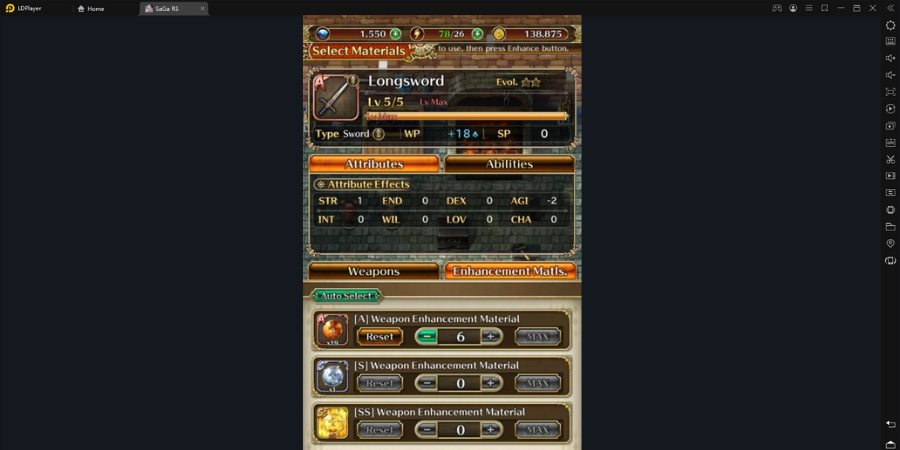 If you want to earn more rewards, you can use missions. This is one of the most excellent ways to make more extra rewards that help your team keep it up. The daily missions are the most accessible missions. After completing tasks daily, you will receive additional rewards. And the following type of mission is the Weekly mission. These are pretty tougher than the daily missions. You will enjoy special events based on time.

This game gives you many free rewards. There are daily login rewards, and you can gain free rewards by watching 30 seconds advertisements. Do not ignore these great opportunities. By collecting all free bonuses, you can enhance your gameplay.

Go to shops in the game menu. Here, you can have six free daily spins to have free rewards in the jewel shop.

And that will conclude our guide from here. Finally, we have to say to you to download the Romancing SaGa Re UniverSe and play it using the above tactics. Romancing SaGa Re UniverSe Tips for a Best Start