Mobile Legends: Bang Bang is a top-rated MOBA game that is known for its sophisticated gameplay. The high number of concurrent players the game has spoken for themselves in terms of relative popularity. With thousands of players trying to outwit each other in this game of strategy and counter drafting, knowing how to fulfill your role in the best way possible is of integral importance. Here are a few tips and tricks for the Mid Lane in Mobile Legends: Bang Bang that should help you in the long run. Your Playstyle In The Mid Lane:

The Mid Lane is the only 1v1 Lane in Mobile Legends: Bang Bang. All other lanes in the game will have at least two players from either side trying to out-farm each other. Therefore, the Mid Lane usually relies on poor mechanical skill on your part. As such, it can get quite difficult for you to compete with players if you aren't very familiar with the character you have chosen.

Before you pick the role, make sure that you know everything there is to know about your character. You are very confident with the mechanical skill the role requires are. Your sole purpose for the first few minutes in the game is to wreak havoc since you will be the strongest player on your team for a good while.

How To Play The Mid Lane:

A Mid Laning character is inherently aggressive and can take advantage of the farm they are given due to Lane's inherent nature. As such, you need to be overly aggressive in your plays around the map and even in the Mid Lane, as you will end up wasting your timing if you do not do so. However, if you are a beginner at the game, there's a high chance you won't be able to mid-lane efficiently. As such, here's a mobile legends beginner guide to help you out.

Try to contest every creep that you can and be very aggressive when taking last hits. Make sure to report the enemy Mid Laner as missing as they may be going for a gank. Moreover, as soon as you get your Early Levels and know that you are somewhat strong, you should instantly start rotating around the map.

Surprisingly, while most players might think that getting a kill is the only way the Mid Laner can establish their impact in the game, you can also do so by just being vigilant in the Lane and establishing your presence there. If you start camping a lane top or bottom, the enemy team will not be able to play there as they will now have to face off against three of your team, with one being significantly higher level than all of them. So, they will either abandon the Lane or bring in a Mid Laner themselves. In any case, your main objective is to create chaos on the map and to try and keep the Safe Lane AD Carry as far away from the epicenter of the fight.

By forcing out such a large rotation, you have done your job as a Mid Laner even if it did not result in a kill. So, try not to get too greedy for kills and understand your inherent role as a Mid Laner and focus on fulfilling it.

When Do I Start Being Aggressive?

Many players make the mistake of playing too passively or aggressively when they should be farming / split-pushing. Generally, as soon as you get your ultimate, you should think about ganking a lane as that is a point where no one else will have their ultimate up by then. So, you can snag some easy kills.

After successfully landing a gank at that stage, you should then wait for your first core item to show up before you start dictating the map's pace. Remember that the Mid Laner is the highest net worth character in the game in most cases. So, if you do end up dying at an unfavorable moment with no real trade being made, you will be giving away quite a substantial lead to your enemy, which they can take advantage of and steamroll you further. 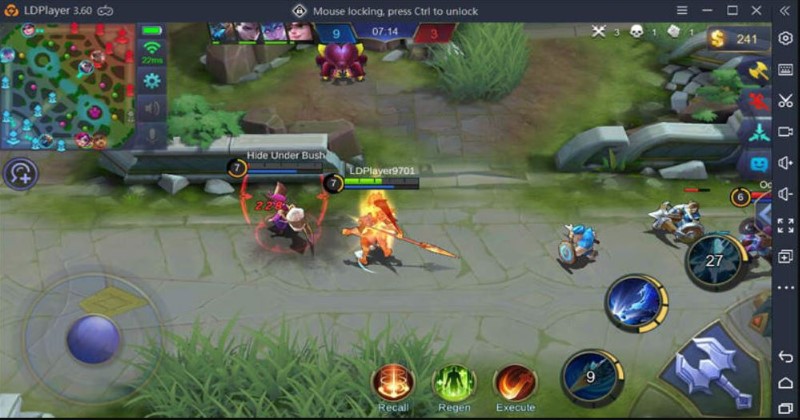 The Mid Lane is the most mechanically demanding role in the game. One must understand that being adequately comfortable with their controls or playing on a mouse or keyboard. Thankfully, LDPlayer features complete keyboard and mouse integration with LDPlayer just like you would expect from a PC MOBA game like League of Legends or DOTA 2. Moreover, you can also re-map and customize keys according to your will, which adds an element of versatility and comfort to the game, providing you with an actual competitive edge.

Target Priorities For The Mid Lane:

Mobile Legends: Bang Bang is a game of opposing symmetry. So, if your objective is to protect your own Safe Lane, your direct counter-objective is to try and kill their Safe Lane. If you succeed, there's a very high chance that you might end up winning the game of your kills as your Safe Lane ADC will easily be able to carry the Mid Game and the Late Game as they were not ganked at all.

As such, making aggressive plays even if it costs your life once in a while and playing on the opposite side of your ADC can save their life more often than not, which helps them get the extremely safe farm. If you aren’t fond of the mid-lane role, you might like playing defensively like a tank! Here is how you can improve your Mobile Legends gameplay.

Mobile Legends: Bang Bang is an extremely enjoyable MOBA game with clear role definitions that have helped maintain its relevance even with juggernauts like Wild Rift coming out on the PC. The game has still managed to retain its lead due to its emphasis on mechanics and an utterly free-to-play mechanic with a thriving E-Sports scene. Following these tips and tricks should help you turn into a better Mid Laner in no time. Try to always maintain a deep insight into what meta Mid Laners are being played by professional players so that you can counter-pick and draft effectively. Knowing these tips and tricks, now just don't be hesitate to download Mobile Legends: Bang Bang on PC, enjoy playing it with LDPlayer!