MARVEL Future Revolution is a game that revolves around a lot of grinding. Thankfully, there are a few ways for you to maximize your output and gain the premium currency in the game, crystals. This guide talks about everything you need to know about the most efficient ways to spend those crystals. If you haven't already, you can download Marvel Future Revolution for free on LDPlayer.

The first thing we're going to do is to check what you can do with the crystals and where you can get them. As you can see in the top right corner of the game, you’ll be able to see your total crystals. This is the total crystals that you have accumulated throughout your playthrough.

Firstly, you will need to go to the store that presents you with all the stuff you can spend. So, if you don't want to spend real money, you can find crystals. Here, you have the option of either buying crystals or going free-to-play.

Free To Play Or Pay To Play?

You can earn up to 4000 gold in the first three weeks of your playthrough if you level up your characters to about 61. If you feel like that is enough for your playthrough and you won't need to spend more crystals, then don't go for spending real money.

However, you will always have the option of spending whenever you need to for the most optimal efficient leveling and performance in the game.

We start at the consumable section. This is where we want to get started because, as you see here, you can buy a bunch of stuff for gold, but there is some you can buy for crystals. But, the one thing that stands out the most is the Hero Slot Expansion Ticket. This allows you to unlock your fifth, sixth, seventh, and eighth character. Now, you might be wondering as to why you would need this. Well, that depends on how much you have played the game. If you play other characters, you can do side quests for up to 4 characters. But there are other reasons too. One of those is your squad rank. Once you purchase the expansion ticket, you will be able to find it in your inventory.

After you use the ticket, it drags you back to the hero select screen. This allows you to pick up a character. With eight characters currently in the game, you can play all the characters in the game with all these slots. 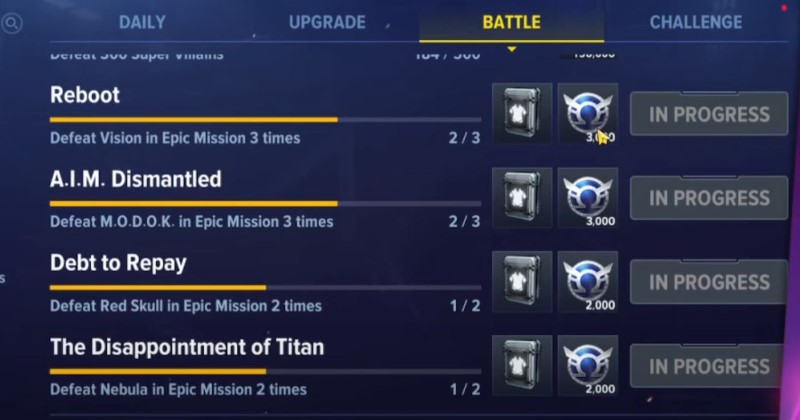 This is one of the first things that we would buy first as you go along because it is really important to your squad rank. Squad Rank is very important because you have your character level and squad rank. It is really important for game progression because, at certain points of the game, you need to have it improved to get to the next regions of the storyline. But, how you do that typically is to play your main character. But, another way to grind is to play the story again on other characters. Take a look at our recommended team guide for the MARVEL Future Revolution.

You can go to the Records Section and go to the Battle Section, and you will be able to reboot all your quests multiple times. They will show all of the main story battles. Every time you do this with an additional character can get. With each character, you get a huge chunk of Squad XP. The more characters that you clear the main story with, the more Squad XP you get. You also end up getting more achievements and crystals. This is a good source of crystals through overall achievements in the game.

There are costume bundles that you can get with Crystals. But, we don’t think it is all that great because they take a huge chunk of your crystals. But, there are also set bundles that have comic books that upgrade your power. If you go to the draws, it will cost 1800 crystals to a draw of 10.

But, if you look into the details section, you will see each drop's chances. In most cases, you will end up getting a four-star in 10 drops. Realistically, you will get three stars, and they are not that hard to get. Putting that into perspective, you won’t have to jump ahead too much and will have to spend a lot on pulls to get four and five stars. So, we think the costumes are not the best use of your crystals. 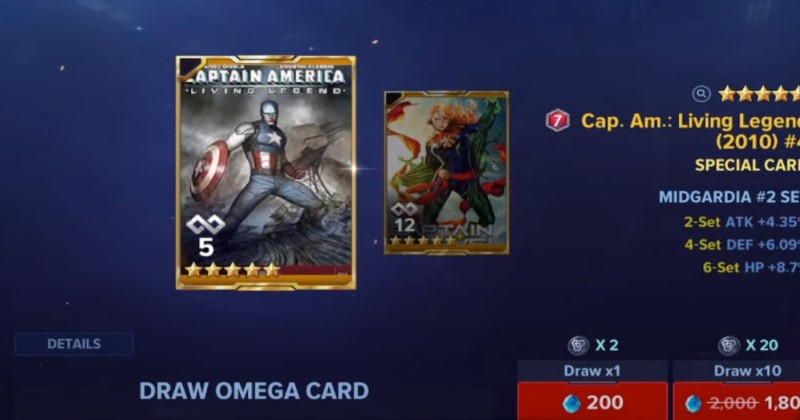 On the other hand, Omega cards are a bit different; they are the same cost and pretty much have the same drop rate. The difference is that omega cards also improve your stats and are shareable across your account. So, you can trade them to your other characters if you do not need them on a certain character with a total of 5-6 equipped. So, if there is ever a time that you feel like you don’t need them anymore, you can transfer that to one of your other characters and still make use of it.

It makes us feel like the omega cards or aka the comic books, are more worth than your crystals than your costumes. However, that is opinion-based. Costumes add an aesthetic difference too, which is quite sought after. But, the drop rates are really low, so it is up to you. Take a look at our beginner mistakes guide for MARVEL Future Revolution for more tips and tricks about the game.

The Dimension box is half the cost. It is 900 for a drop of 10. Cores are really important for your power as well. However, in terms of other drops, they are Squad Rank XP. It is much easier to do by levelling up your other characters rather than going for them.

So, if you are after squad XP, we recommend not going for the Dimension Box. The cores are probably the best drops here, but once again, you can get these through natural means as well. The Blueprints and Research Logs level up your squad power, and again, these are things that you can also get by grinding another character's story. However, as tedious as it sounds, the game is quite gritty, and therefore it isn't necessary.

If you are going to do any of them, you should probably go for the Omega Cards as, according to us, they have the best use.

Bundles are a bit different as compared to draws. They guarantee the chance that you will end up getting a particular item or comic book. If you are looking for it, this can be quite advantageous. However, they cost a lot more as they come up at about 2000 crystals for four pieces, whereas if you were to draw, you would get ten pieces. In any case, this is entirely dependent on the bundle you are after and how important it is for you. Going for draws makes much more sense if you are not particularly looking for anything as they provide you with better value. However, if you are in the mood for a specific costume for a particular character and you find it featured on the bundle, the probability of you getting from an x10 draw is, of course, much lower than something which is 100% guaranteed. So, in those cases, if you have the money to spend, go for the guaranteed bundle. The same can also be applied to Omega Card bundles. They are guaranteed as well.

It might not be super obvious, but inventory space is quite important in MARVEL Future Revolution. You start at 100 inventory spaces, but you can mix it up to a total of 250. It does go up incrementally, but after you get to about 150, it jumps up from 20 per 5 slots to 60 per 5 slots with another jump at 180 to about 80 per 5 slots, and lastly goes to 100 per 5 slots.

You might want to do this because if you are grinding a lot, like getting the New Stark Super Alloy which allows you to craft regional costumes. The best place to get this stuff is setting your character to Auto and grinding away at those enemies. Now, you do this in the region that you want to get the crafting materials for. But, what happens is that you get a lot of badges. For example, if you are farming in Hydra City to get Imperial Combat Uniform Fabric, you get random badges through drops through time. Once you dismantle them, you get Convergium which is useful for crafting in the game.

So, if you were to set your game on Auto and go away for 1-2 hours, it would fill up eventually, and you would max your inventory slots. So, when you do these farming sessions, you will be able to pick up more badges and will be able to dismantle them and get more materials since your inventory won't be overflowing.

This is quite a good way to store some of your materials and some items you can share across your accounts. Take a look at our complete badge guide to know everything about dismantling!

Buying the character slots is a one-time thing. You don't have to think about it again. And from there, we would prioritize your primary character's inventory and then, thirdly, your squad storage space, maybe bumping it about to 150. And then, after that, it is up to you. You can go for pulls or whatever you feel like makes the most sense.

Knowing where to spend crystals can mean the difference between having a comfortable gaming experience or spending most of your resources on something that isn't quite useful. So, after following this guide, you should have an idea of what you need to do.