If you just started playing Marvel Future Revolution, you have probably come across badges. These in-game items, at first glance, probably don't seem that important, but the reality of the situation is entirely different. Badges are the second most influential item in a game that can affect your Hero's power level. To learn about which Hero matches your playstyle so you can get relevant badges, check out our Marvel Future Revolution Character Guide.

Every Badge in the game is unique and has a different effect on your character. Each Badge has a different marvel character on it and has different stars, which represent its rarity. Below is a guide for you telling you everything you need to know about these badges.

How to Get Badges In-Game:

The two viable ways to get badges in-game are: These in-game badges can be obtained through playing Omega wars. By playing against other players, whether you lose or win, you get rewarded with tokens. These tokens can then be used in the shop to buy Omega War Battle Badge Box; these boxes contain different rarity of badges depending on the cost of the box.

The game has two Omega War Badge boxes to choose from. The first one costs 3000 tokens, and the second one costs 6000 tokens. The 6000 one has a guaranteed chance of you getting a 3 to 5-star Badge, while the 3000 one is entirely randomized. There is no other way to get these Omega Boxes in-game apart from grinding in the PvP mode against other players.

By defeating different enemies in PvP, you will be rewarded with PvP badges. These badges will provide you with extra stats in the PvP game mode. Making you deal more damage to other players in the game.

The best way to get PvE Badges in-game. You can go to operation and choose specific Blitz missions. Depending on what mission you choose, you will be rewarded with different boxes. Apart from the normal badges, you can also get bonus damage badges that are specific for each villain you defeat.

PvE Badges will provide you with in-game increased damage and other buffs to your character depending on the badge set you are using. So try to always go for higher-level badges in-game as they will increase your PvE damage.

Rarity and Level of Badges: In Marvel Future Revolution, the game uses stars to show how rare an item is. Each Badge got a star rarity to it. The higher the number of stars a badge has on it, the better its stats tend to be. So always try to go for badges with higher rarity, and instead of dismantling them, Dave it for your future squad heroes.

The other thing which decides how good a badge is apart from its rarity is the level it's on. The max level of each Badge is 100, and they can be upgraded to it. The Badge takes gold to be upgraded, so it's very important to spend it on the suitable Badge so you won't be having problems with your gold. So if you get a badge with a good rarity like a six-star and it has good stats on it, maxing it out will help you increase your total Power by a lot.

Each slot in the game represents a different kind of stat, meaning you have to keep an eye on what Badge you are putting in each slot.

The first and second slot is your attack slot. Making it one of the most crucial ones. This slot needs to be filled with badges with higher crit rates, increased attack speed, and all the stats that will help you deal more damage in the long run. If you want to increase your DPS, this is the slot you need to keep your eye on the most.

The third and fourth slot represents DEF. This slot is the primary stat buff that players like Captain America and Iron Man need to increase. The DEF badges are essential to your gameplay as they will provide you with sustain and incases like Captain America even more damage. So try to get higher rarity cards in these slots.

The fifth and Sixth slot is used for HP. Compared to ATK and DEF, this slot at first might not seem very important. But when you realize this slot also affects the health regeneration, skill cooldowns, and ultimate cooldowns, it suddenly starts feeling way more critical. So if you are trying to build a guide with low cooldowns and fast health regeneration, choosing the right kind of Badges is very important. 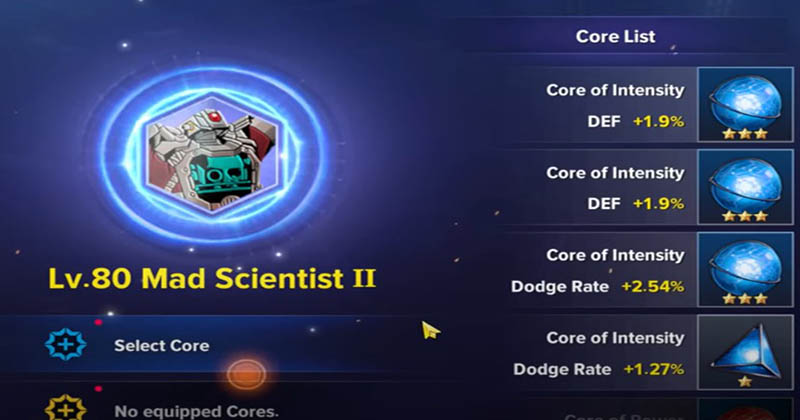 Each Badge in the game has a number of cores that you can attach to them. You can choose one or two Cores to a Badge depending on what kind of a badge it is. Core provides a badge with vast chunks of buffs meaning the more cores a badge has, the better stats it will provide to a hero.

Just like badges, Cores also have different rarities meaning that the higher rarity one is a must. Apart from the rarity aspect, the Cores description itself is very important as it lets you know what kind of buffs it offers. Cores can be used to make very interesting combos with badges. Giving you an insane amount of damage and some absurd stats combos.

You can infuse Cores with different badges making it so that each Badge could have some customization to it. It takes some gold to infuse badges with Cores meaning you need to keep an eye on your spending while you are doing so.

How to Build Badges:

As badges in this game give you most of your stats in-game and even more than costumes in sub instances, knowing how to build them is very important. But before that, you need to understand that each Badge is unique, and you need to have in mind what you are building.

Badges have different rarities and levels depending on which they give certain stat buffs and, in some cases, even game mode-specific buffs. If you are playing PvP mode a lot, getting badges that will impact your GamePlay experience by a lot is very important.

If you are playing PvE mode to go against all the different blitz opponents is a must. It is the easiest way for you to get your badges on, and by defeating enemies, you can even get certain badges sets. For example, if you fight against a maestro, the game will reward you with a Badge Set that might be a maestro theme. These badges give you increased PvE stats depending on which Badge you are choosing.

To build the perfect gear, you need to differentiate between all these things and make different badge sets for different modes. For whatever Hero you might be building, you must need a clear vision of what's your future plan about that Hero is making it easier for you to build it. After deciding what build path, you are going to follow.

You need to find the badges which fit your build and start hunting for them in the highest rarity. After doing so, you also need to enhance them to get some extra bonus stats. Also, infusing the badges with the writing kind of cores is a must as it will only increase the efficiency of your total build. Due to the vast variety of badges, sometimes you might end up stuck in a dilemma where your storage is full, and you might have to clean your storage. Badges can be traded in for some material, making them a win-win situation either way. But sometimes, holding onto these badges can be way better as it can help you level up your other heroes.

So if you are stuck with many badges, you can dismantle the low tier one, which doesn't seem very useful while holding onto the rarer ones. The extra material from these Badges can help tremendously but dismantling the wrong ones can put you at an actual loss.

If you are a new player to Marvel Future Revolution above guide will tell you everything you need to know about badges. Badges are one of the most important Mechanics in the game, and they can ruin or make your game. So choosing them and knowing which one to sell is very important. Apart from that, this guide will also help you be a better player in the PvP and PvE mode of the game as it provides the user with knowledge of how to increase their stats. If you are looking for tips and tricks on getting better at Marvel Future Revolution, check out our guide.