LOL: Wild Rift is one of the most renowned games of 2021. The game brings a new life to mobile gaming where you get to play free champions and show your skills without spending money or anything else. Want a fair chance at ranking higher in a game, LOL: Wild Rift is one of those games. Today, we have brought you patch 2.2C, changes, champions, and much more. You can also check patch 2.2a to check all the changes they previously made.

With Rengar and Kha’Zix still in the middle of their rivalry, new competition emerges from the sun-soaked sands of Shurima. Renekton will be available later in the patch to face off against his brother, Nasus, and the ancient rituals of Blood Moon will make their debut in Wild Rift a little later. We’ve also got some targeted nerfs for some of the strongest solo queue superstars: the #evelynnisoverparty starts now, besties.

RENEKTON, THE BUTCHER OF THE SANDS: Renekton is a terrifying, rage-fueled Ascended warrior from the scorched deserts of Shurima. Once, he was his empire’s most esteemed champion, leading its grand armies to countless victories. However, after the fall of the Sun Disc, Renekton was entombed beneath the sands—and slowly, as the world above changed, he succumbed to insanity. Now free once more, he is utterly consumed with wreaking vengeance upon his brother, Nasus, who he blames for the centuries lost in darkness.

All skins will be released throughout the patch. You can earn or purchase accessories from a bunch of different sources. Please check the relevant page in-game for more information on how to get ‘em! Everyone’s welcome on the Rift! The Pride event will begin on May 24. More information available soon.

Later in the patch, Nasus and Renekton enter Wild Rift’s second Nemesis Duel. As a reminder, these can trigger when:

A Nemesis Duel won’t happen every game; these conditions are met, but when it does, everyone in the game will know through an in-game announcement. A champion wins the in-game event when the opposing champion dies within 3 seconds of taking damage from the winning champion.

Braum is too good at locking people down despite his specific identity as a champion who counters powerful projectiles.

Diana’s Attack Speed on (P) Moonsilver Blade is scaling excessively as she snowballs.

Fizz is drowning against early game poke mages in mid. We're throwing him a life ring for his initial mana issues.

Jax’s late game is feeling overly nerfed, especially when he doesn’t have access to blue buff. Giving him some mana as he grows should help allow him to scale into a persistent threat in longer games.

Kai’Sa is performing too well in high-skill play. We are nerfing her wave clearing ability and reducing her playmaking potential in the early game to keep her in check.

Lee Sin is slightly overperforming at higher skill levels, so we’re adjusting the power you get from optimizing his passive well.

While other enchanter supports are performing well, Lulu has fallen behind. We’re reverting some of the recent nerfs to her base stats to help her (and Pix) out.

We want to encourage champs in multiple lanes, but support Lux is a bit too strong. To address that, we’re adjusting her shield strength.

Despite his recent buffs, Pantheon is still struggling to make an impact. We’re giving him another little nudge to help him find his legs.

Twisted Fate is struggling; his Red Card, in particular, is not matching up to the rest of his deck.

With ARAM’s last week coming up, we’re taking one last swing at some outliers before we take the mode back into the lab. 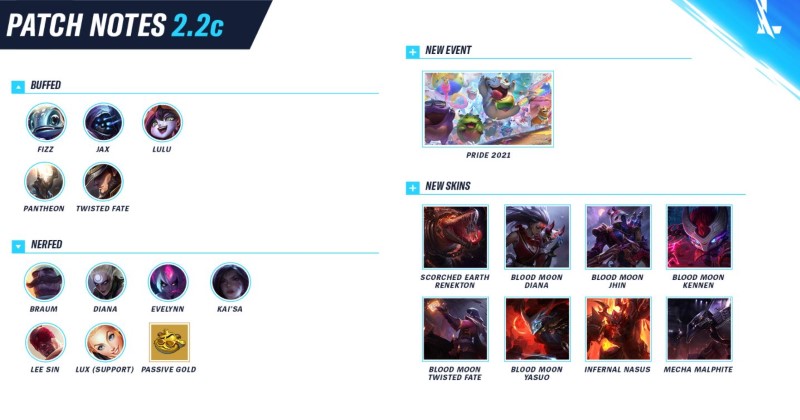 We’re seeing players finish their builds too quickly leading to less satisfying power progression in longer games. Additionally, we feel roaming as a team while ahead comes at too little of a cost which makes split pushing weaker than we’d like. We’re taking a small stab at solving these problems by lowering passive gold gain in the mid to late game. We’ll be closely monitoring the net effect of this change, as it’s pretty experimental.

You can also download LOL: Wild Rift on PC for free to enhance your gaming along with practicing all of these champions. LOL: Wild Rift is one of those games where you can only get better with the practice and the more practice you will have the more your skills will be sharpened.