Call of Duty Mobile A Basic Guide About Striker

Striker is one of the most underrated shotguns because of its mid to close range and the fact that it takes a ridiculously long time to reload. The reload time of the gun is 8.35 seconds. This reload time is very long compared to the other guns, and this can prove fatal when on the battlefield. However, the Striker does provide good damage, and the mag size is 12, which is very good considering the damage it inflicts on enemies. This can be upgraded up to 16 from the Gunsmith Loadout. This gun can be unlocked after the player reaches level 12.

Striker is a semi-automatic shotgun that provides higher accuracy at medium and close ranges. The gun can kill an enemy with only two shots at medium range. However, if the enemy is close enough, it will only take one bullet in the chest or head area to take down the enemy. This is a tier A weapon, which means it can deal pretty good damage even without the attachments from the gunsmith. And with the attachments equipped, this gun will go on killing the enemies like it is supposed to do. This gun is usually very suitable for aggressive type players because of the damage and accuracy it has and the mobility it provides. 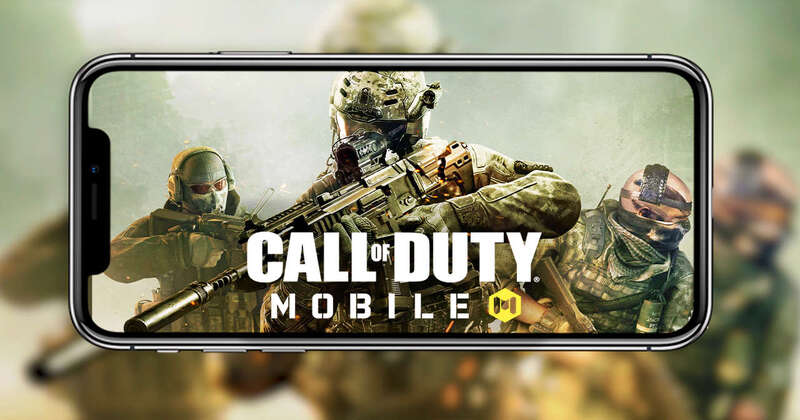 For a shotgun, this gun provides a decent fire rate and good damage in Battle Royale. This gun can only be found in customized airdrops in the loadout after its blueprint was removed from Battle Royale.

In multiplayer mode, this gun is the choice of many experienced players. Because of the mobility of this gun, with its damage and accuracy, this gun can prove its value on the battlefield. And the rate of fire is also good, which means that this gun does not let enemies stand near it. The recoil is also very low, which favors the accuracy of the gun. This gun may prove difficult for players who are new to shotguns. Nut once that phase passes, it is very hard to ignore it for the ultimate experience of the game. 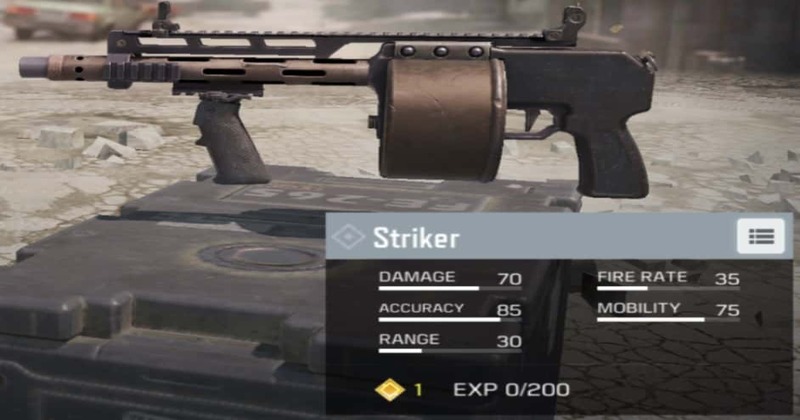 Since this gun is a tier A shotgun, it can be a pretty good asset even without the attachments, but with the added advantage of attachments, this gun will become a beast. It is recommended to upgrade this gun to its maximum capacity for the best performance this gun can provide. This gun only lets players add three attachments. Here we will guide players to the best possible loadout and their effects to make this gun even more fun to play with. You can also check out gunsmith guide for that.

Barrel: The best option for the barrel is to go with Long Barrel. This attachment will increase the range of the gun. Since the range is the problem for Striker, this attachment comes very handy in this regard.

Optic: Optics are used to target the players that are very far from the gun. Since this gun is good only for medium and short ranges, it is best not to use the optic scope. And with the short-range, this gun provides a large area of impaction because bullets spread from the shotgun. So this removes the usage of scope even for the players that are new to the shotgun. The best alternative is to use the laser that will help in increasing the accuracy, among other things.

Stock: Stock is not recommended for this shotgun because it does not provide any tactical advantage to the gun as other attachments do. So left this attachment unattached.

Laser: Laser is the best option to go instead of optic scope because it gives a more strategic advantage to the gun. The best option for the laser is to go with MIP Laser 5mW. This attachment not only gives more hip-fire accuracy but also slightly improves bullet spread and sprint out time. However, as great things come with a downside, this laser has high-intensity light that can become visible to the enemy. But, as the shotguns players are not big on concealment, this attachment is best for the Striker. 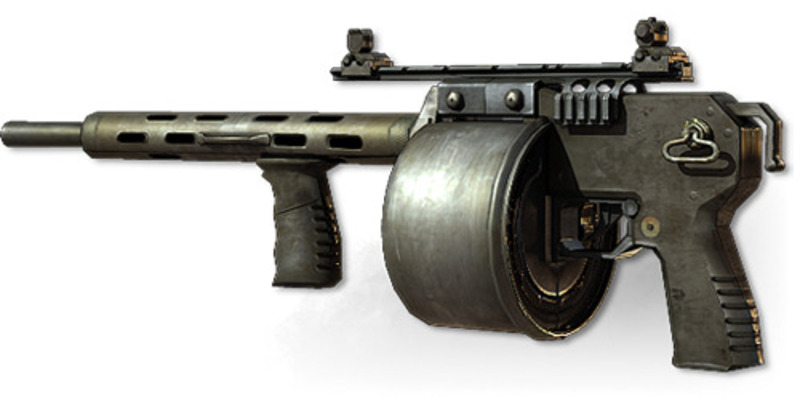 Rear grip: Rear grip attachment also does not provide any tactical advantage to the gun. So left this attachment unequipped.

Ammunition: Ammunition is the best option among other attachments to go with. Since the gun has a relatively small mag size, it is best to upgrade this attachment as soon as possible. There are two options that are best, and both have their strategic advantage on the battlefield. The first option is to go with a 16 Round Extended Reload Case. This option will give you more bullets in the magazine, and the player can kill more enemies in a single reload. This will, however, increase your reload time.

The second option is to go with Fast Reload Reload Case. This option will decrease the player’s reload time up to a certain amount. Players can go with either option depending on their experience with this shotgun. It is recommended that if the player is new to this gun, the best option to go with is the Fast Reload Reload case. Because this will help them get a good grasp of this gun, and when they become experienced enough, switch to the Round Extended Reload Case to get the ultimate experience out of this shotgun.

Perk: Perks allow the gun and the player to gain various strategic boosts in the game. Here are the best options of perks that will go with Striker that will boost its performance.

Skins not only give the gun a nicer or deadlier look but also gives different advantages to the gun. Each skin may come with special effects that can be seen when a player will kill an enemy using this gun. Following is the list of different skins available for the Striker and the instruction on how to get them.

Striker Barricade: Barricade is an epic skin in the game that can be unlocked by reaching tier 20 in the premium battle pass of season 7. This skin provides the added advantage of resisting explosives better while sliding. The special effects are also shown whenever an enemy is killed using this gun with barricade skin on it. This is a cool skin to have, and it will strike fear in the enemies.

Striker Pastel Poison: This epic skin can be unlocked from the Hunt Crate. This skin provides no strategic advantage to the gun.

Striker Aeronaut: This epic skin can be unlocked by reaching tier 20 in the premium battle pass of season 9. this skin also does not provide any advantage to the gun whatsoever.

Striker Yellow Camo: This epic skin is cool to look at and can be unlocked from Buried Treasure Chest. This skin does not provide any tactical advantage to the gun.

Striker Irradiated Amethyst: This epic skin provides a different advantage to the gun from other skins. The advantage this skin gives is that it will increase the player’s movement speed for a little while after the player kills the enemies from this gun. This skin can be unlocked free of cost after reaching tier 25 in the premium battle pass of season 3. 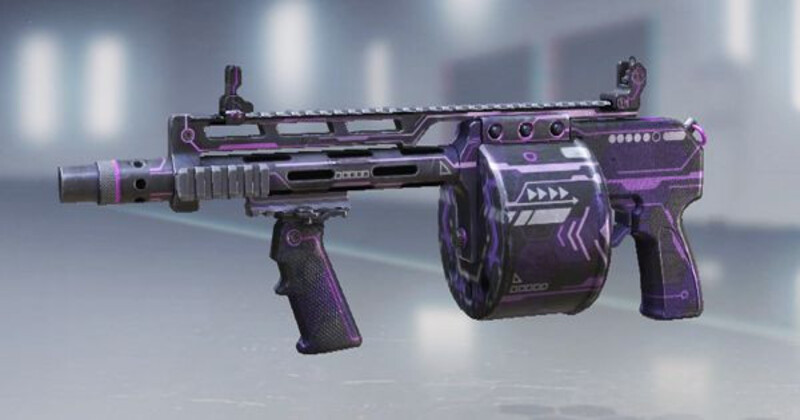 Striker Red: This skin also gives a different advantage to the gun from other skins. This will increase the movement speed of the player by 10 percent for 2 seconds after the player kills the enemies with this shotgun. This skin can be unlocked by buying it from the store. The price of this skin is 800 COD points.

Striker Swamped: This epic skin can be unlocked by purchasing the Silent Stalker Bundle. The price of this bundle is 290 CP. This skin does not provide any tactical advantage to the gun. 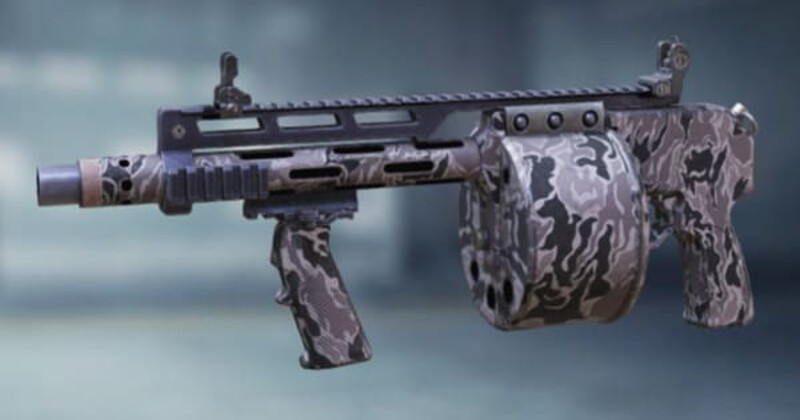 Striker is a cool shotgun to have, and with the attachments and perks that were just described, it will strike fear in the hearts of enemies, as the name indicates. Skins also provide the added advantage to the gun. Once the player gets enough experience with this gun, he will become unstoppable in the face of the enemies. This gun is highly recommended to players who want to try shotguns for the first time and want to blow some heads just for fun. For more knowledge you can read our extensive guides.

A Brief Call of Duty Mobile Weapon Guide of Chicom