Kicking off its new major update Awakening, Epic Seven has debuted its first ever Custom Group Summoning system, a fresh starting system for all players to pick and summon up to 3 favorite characters of their choosing. What is the Custom Group Summoning system?

The Custom Group Summoning system, in the simplest term, is a special banner system that allows you to spend your summoning currencies (bookmarks or bms for short) on 3 specific characters that you choose yourself from a select pool of characters. 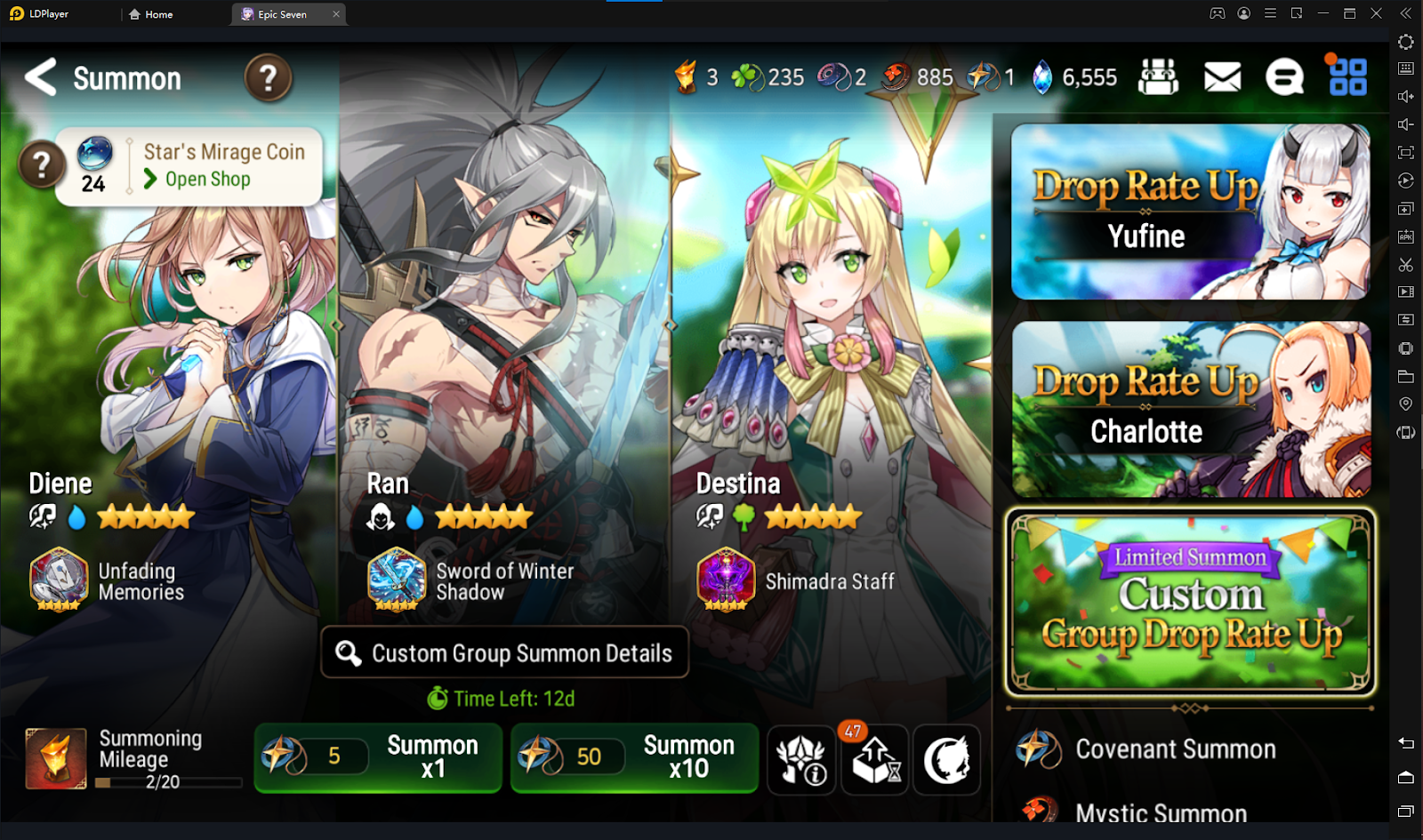 The selection pool for the Custom Group Summoning system consists of Limited Characters, Permanent Characters and their unique Artifacts. When selecting a character, you will have both the character and their artifact rated up, for a total of 3 characters and 3 artifacts rated up in 1 banner. 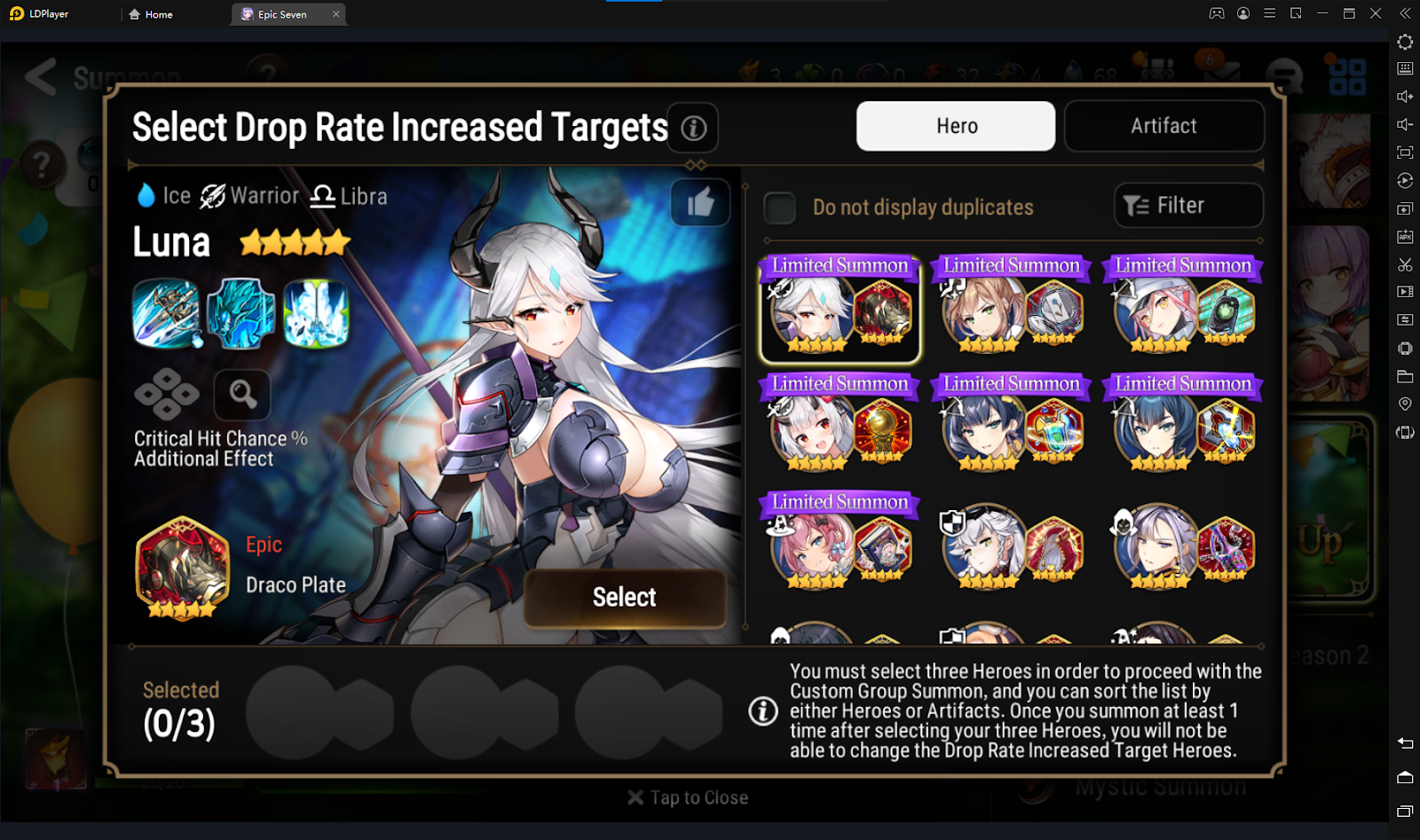 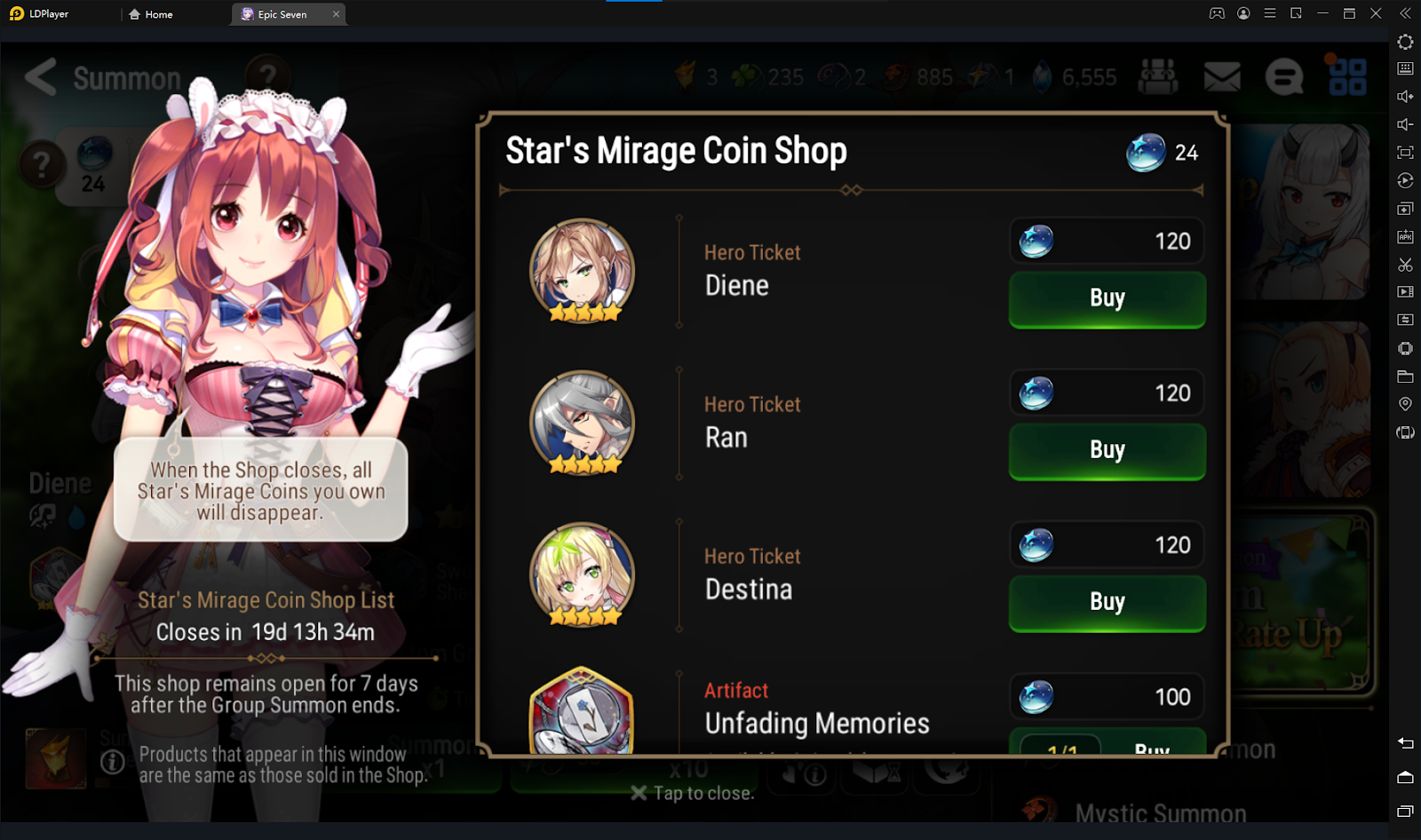 It is important to note, the Custom Group Summoning system be available from 4/21 (Thu) 03:00 ~ 5/19 (Thu) 02:59 UTC, however, the moment you have chosen the 3 characters of your choice and have summoned once, you will NOT be able to change the selection and the banner duration will END in 14 DAYS counting down from that moment.

It is important to select your characters wisely in order to progress in the game. Some characters are notably better and more meta than others in the pool, as will be recommended in the following sections.

Limited Characters You Need to Notice

In the character pools, there are certain characters marked as LIMITED, as they only appear for limited times during their specific rate up banners and won't be added to the general summoning pool, therefore, they are of the utmost priority no matter how good they are, as their banner might not be rerun for the foreseeable future, especially for the summer characters, who might need to wait for an entire year to be reran.

A niche PvP character but is amazing for veteran players, Cerise with her high based speed and Crowd Control oriented skill set provides many utilities for players in both Arena and RTA (Real Time Arena). A top pick to consider for players who want an easy time in PvP. 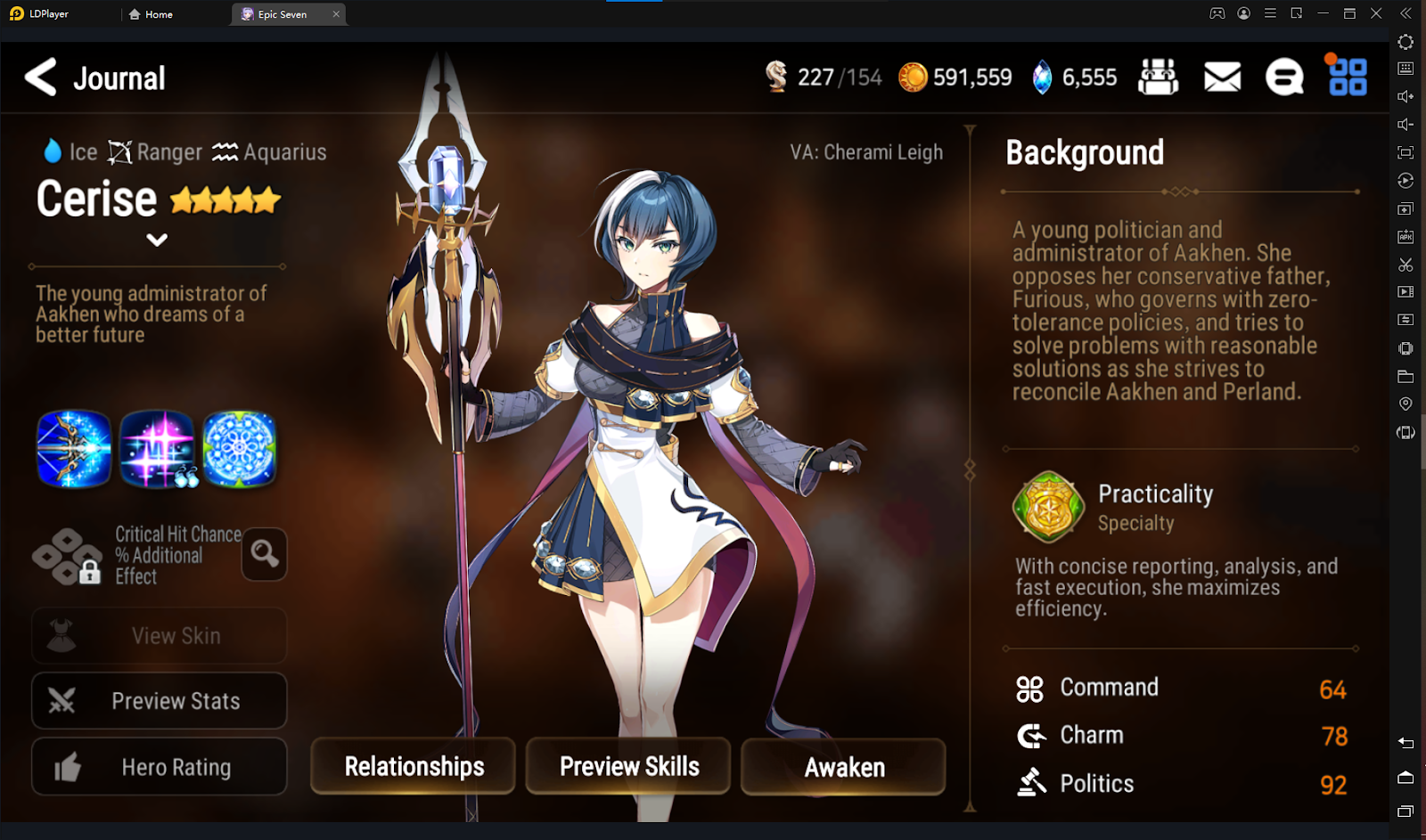 Her unique artifact is also a good artifact to pick up, as it allows Ranger characters to become essentially invisible for 1 turn, making them unable to be hit by ST attacks in PvP.

The first and oldest Limited character to ever be released, Diene is a decently balanced Soul Weaver (or Healer) for both PvP and PvE content. She allows unique utility in her being able to grant the entire team the ability to prevent critical hits from enemies, in addition to being extremely tanky for longer fights. 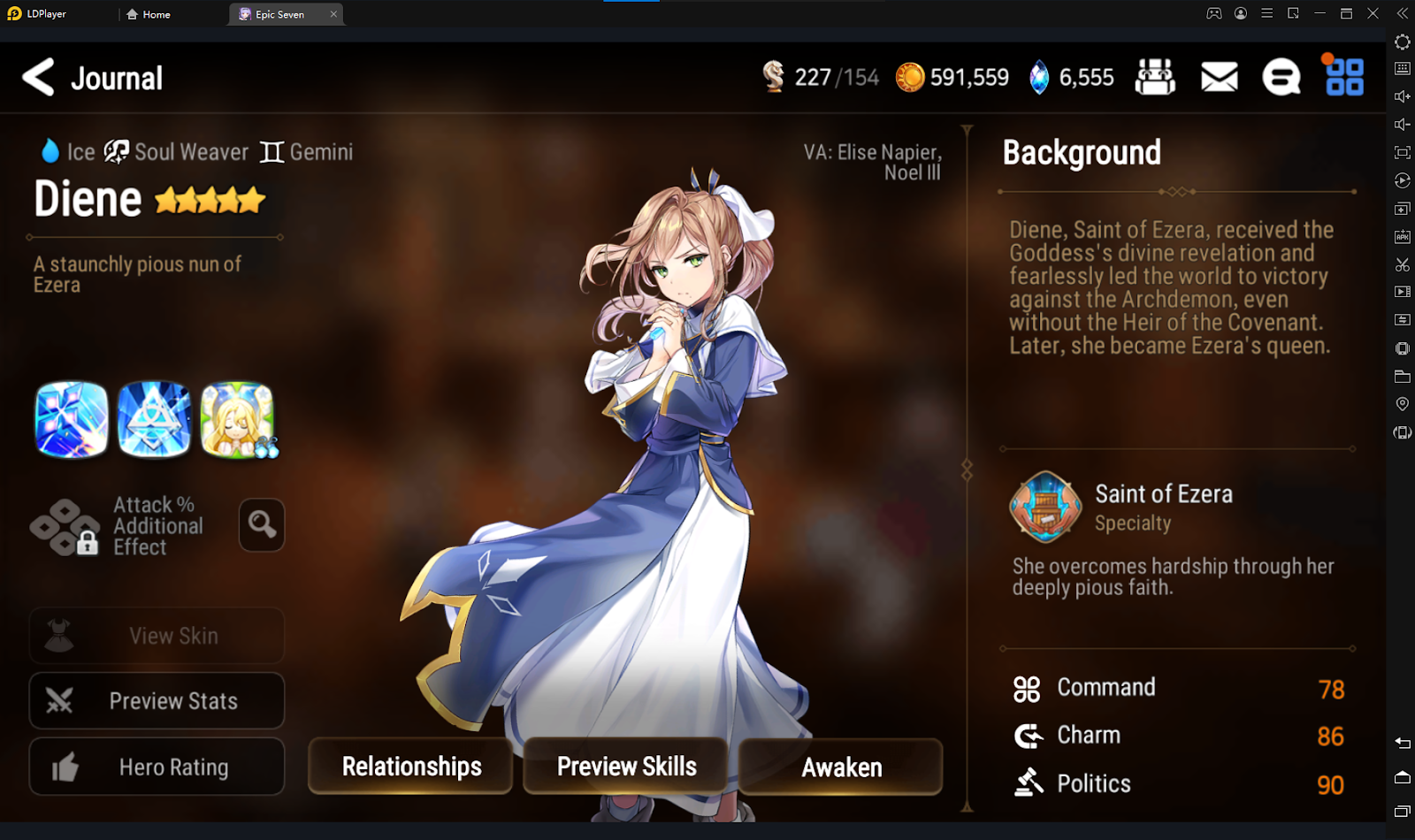 Her unique artifact is a decent artifact to go with other healers, allowing them to heal everyone when they use their healing skills.

The same as Cerise, Fairytale Tenebria is one of the best characters you can choose for PvP. Being a Mage with access to a multitude of amazing artifacts, coupled with her auto activated crowd control skill set, Fairytale Tenebria can be an amazing character to hinder your opponents with debuffs and make them unable to act. 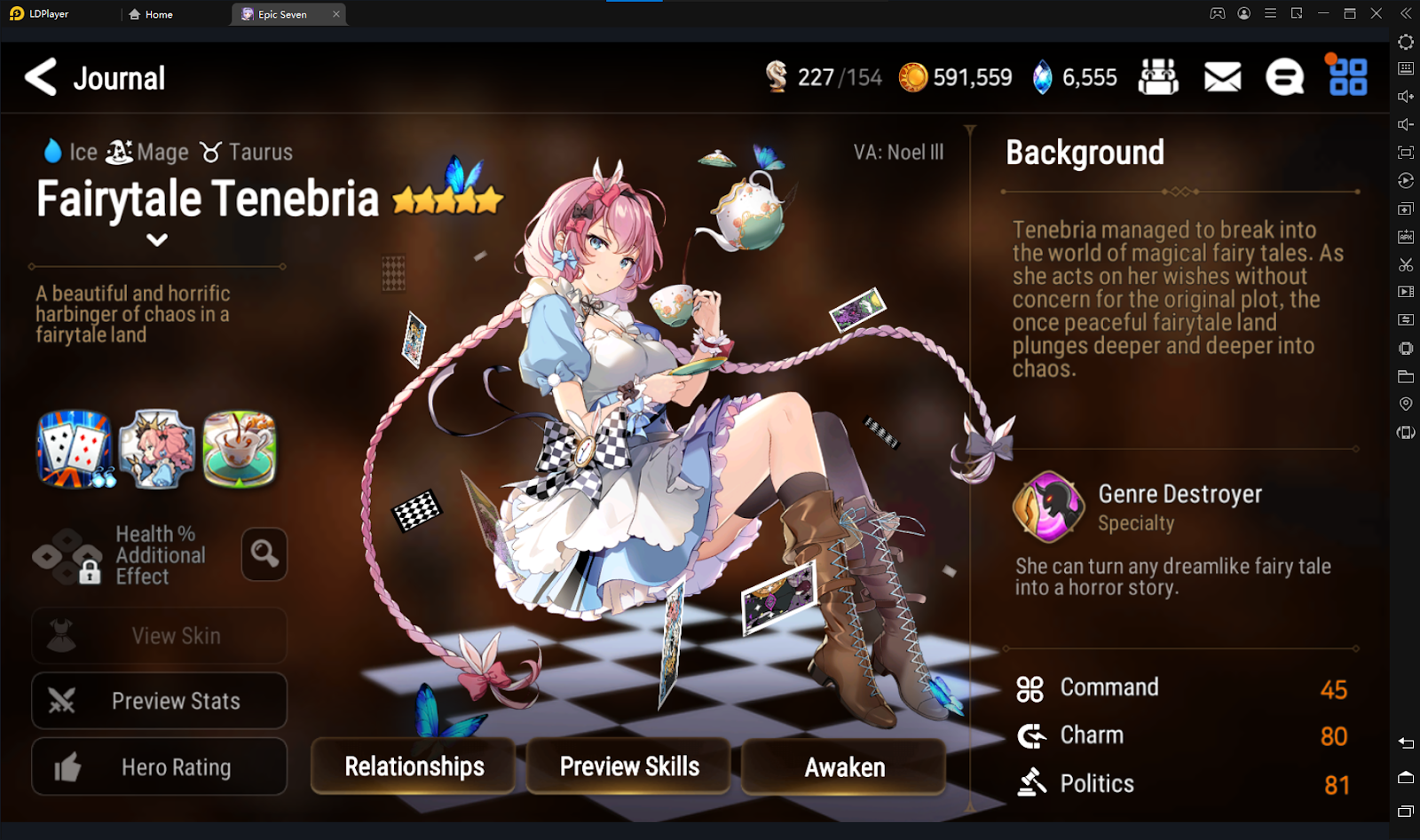 Her unique artifact is a Mage artifact that deals fixed damage and dispel 1 buff from all enemies when the user activates an extra or counterattack.

One of the more balanced choices for both PvE and PvP, Holiday Yufine skill set consists of all AOE attacks, allowing her to clear waves of enemies easier and more effectively for farming in PvE, with the 3rd skill being able to cleanse debuffs being immensely useful for PvP as well. 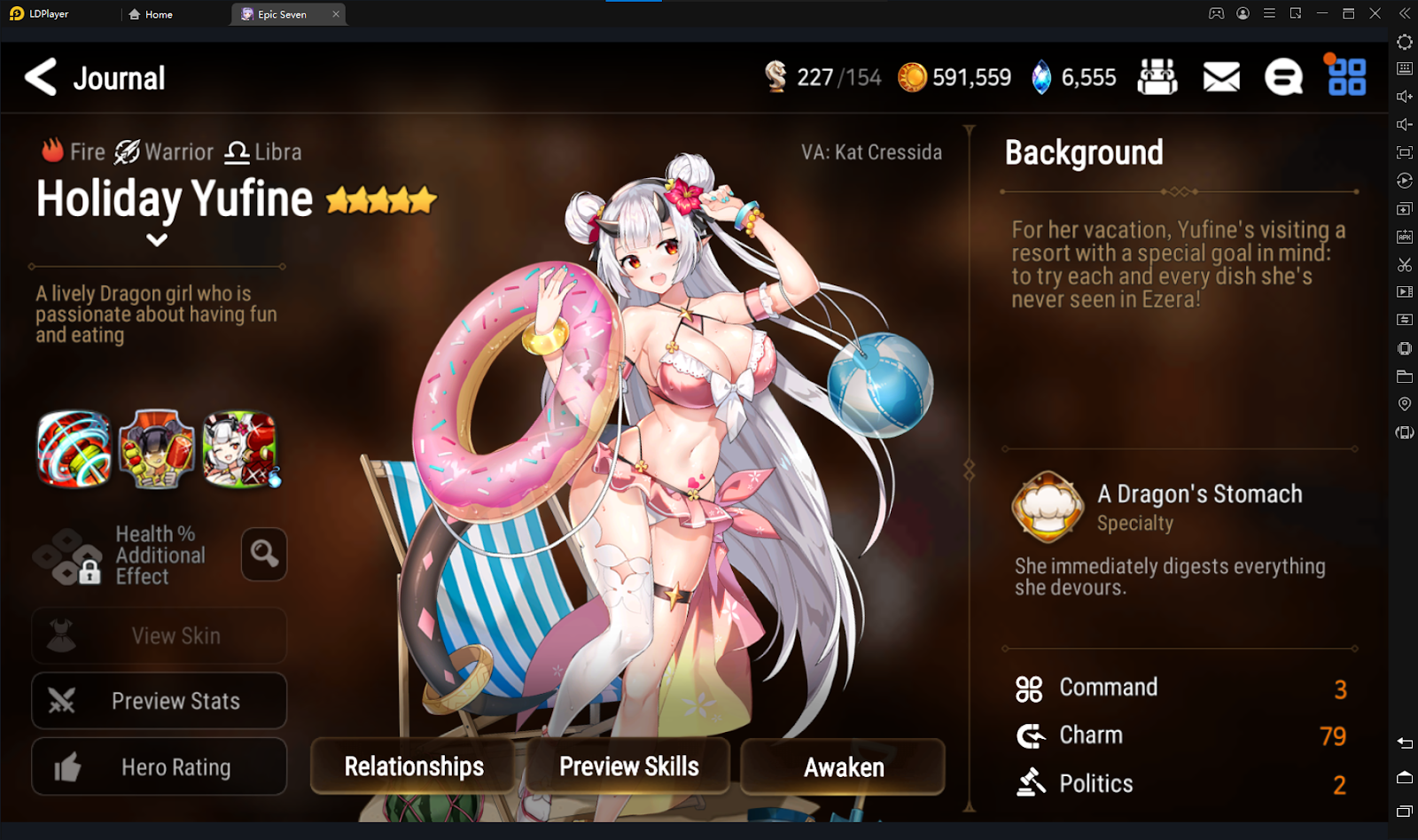 Holiday Yufine's Unique artifact is one of the best artifacts, as it grants the user more effectiveness for them to land debuffs as well as having a chance to stun while using normal attacks, allowing them to effectively shut down your opponent's characters if you are lucky.

One of the first limited characters, Luna is a pure ST damage dealer with a decent kit that allows her to deal significant damage. She has recently received support and remains a relevant damage dealer for both PvE and PvP. 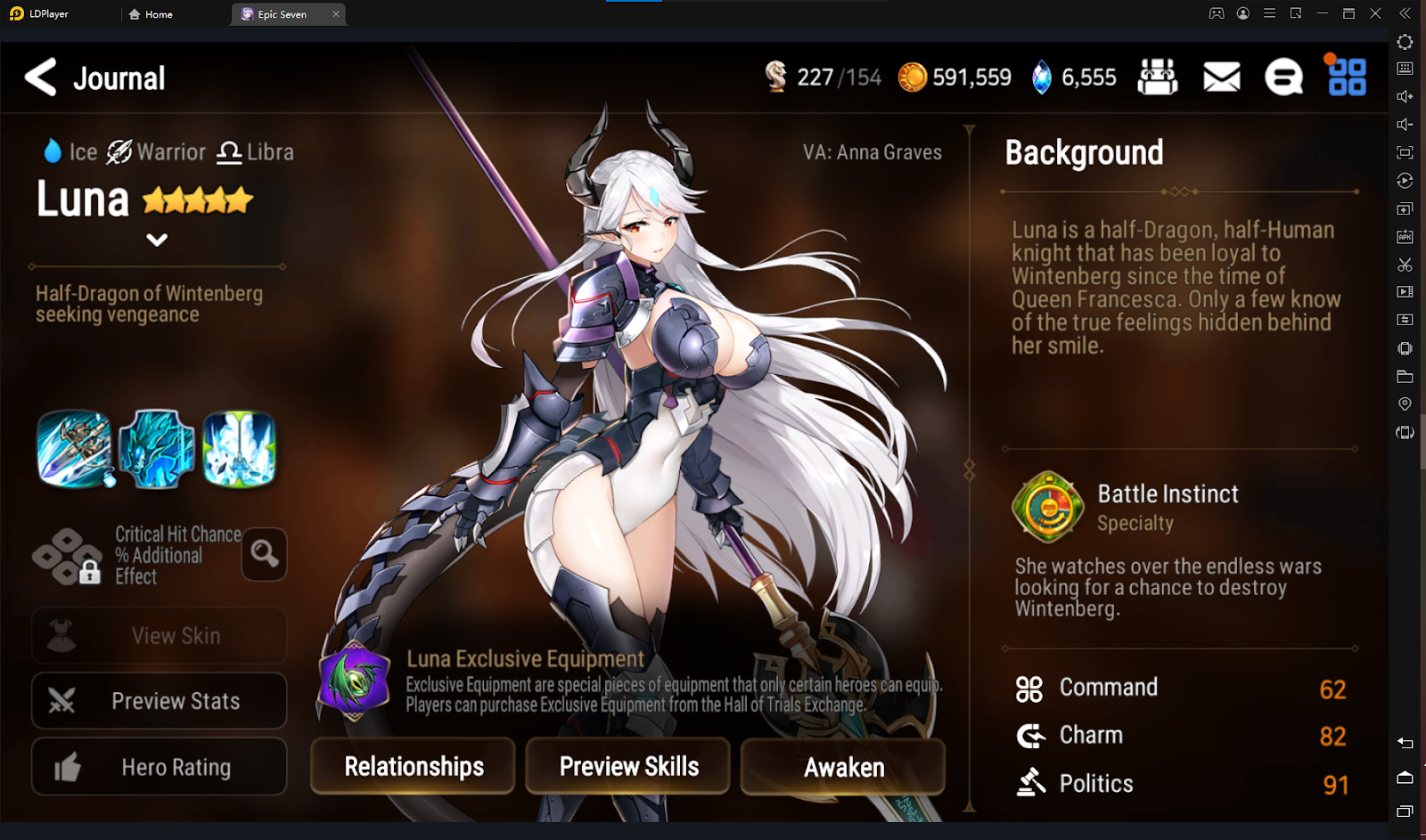 Her unique artifact is a must-have as it allows warrior characters to deal bonus damage based on their attack when they use ST attacks.

The robot with a big mech behind her, Landy is an amazing character that punishes enemy teams that use too many buffs. With her Passive allowing her to gain Fighting Spirits and resets her S3 CD based on the number of enemies' buffs, she can essentially spam her S3 until she defeats the opponent's team. 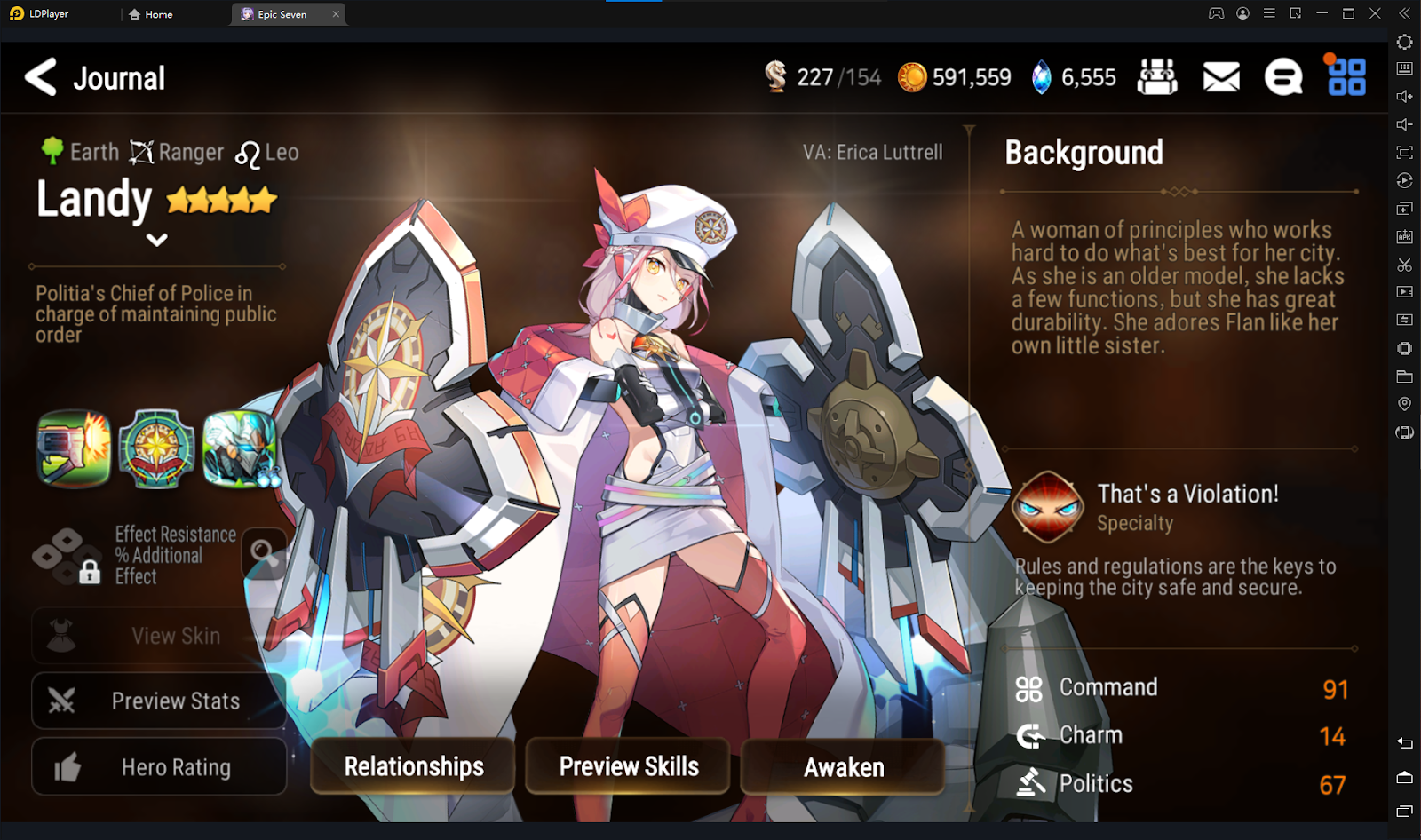 Landy's unique artifact is a good Ranger artifact, especially for those that spam AOE attacks as it increases their Combat readiness by 10% for every AOE attack, with a chance of granting 75% attack up based on the number of enemies' buffs.

The most notorious limited character that dominated Epic Seven's Arena for 1 year, Seaside Bellona's (SSB for short) skill set allows her to deal significant damage while inflicting debuffs, as well as counters the entire enemy's team constantly if she and her allies are hit 5 times consecutively. 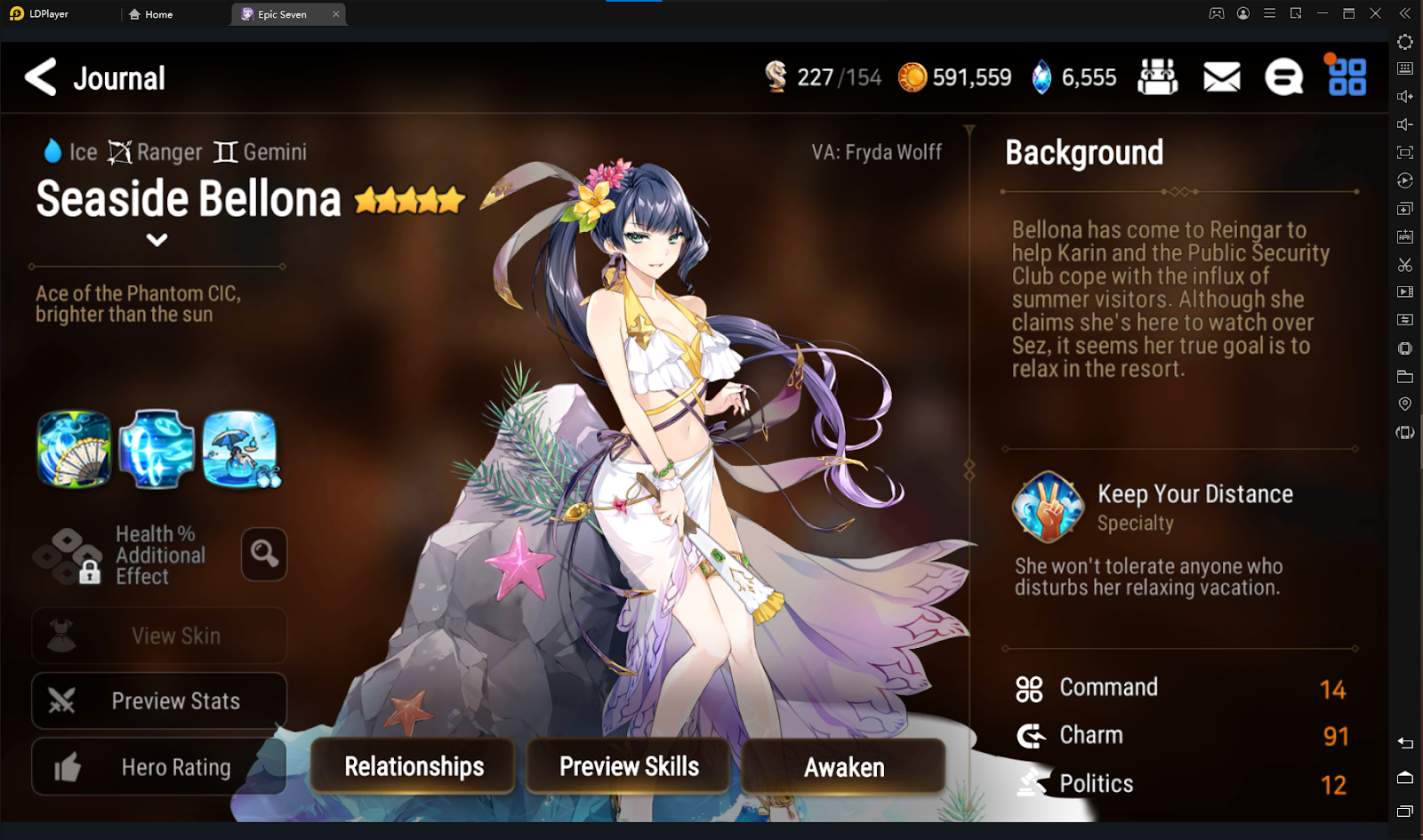 Her unique artifact offers the same effect as Luna's unique artifact, but instead of for ST damage, it is for AOE damage and is one of the best artifacts to have in the game.

Aside from the limited characters, these characters are the best picks for players more focused on PvE contents in Epic Seven:

- Tamarinne: the best offensive healer in the game.

- Ray & Destina: two of the best defensive healers in the game.

- Vildred: one of the fastest farmers in the game.

- Arvalen: one of the best boss killers and Banshee one shot characters in the game.

- Krau: one of the best tanks in the game.

Aside from the limited characters, these characters are the best picks for players more focused on PvP contents in Epic Seven:

- Violet: one of the best picks in Arena for his consistency and tankiness.

- Celine: a character with an amazing skill set that counters a lot of PvP characters that use non-attacking skills.

- Lilias and Charles: excellent tanks and utility characters in PvP.

These following honorable mentions are characters that are immensely powerful and are in the selection pool. However, players will be able to get them for FREE from the upcoming events. Therefore, it is not recommended that players choose these characters for this Custom Group Summoning session :

- Sigret, Vivian & Cermia: the 3 best and most used characters in their respective hunts PvE content. They will be available in the upcoming Hunts support event for free.

- Kanna: You can get a copy of Kanna for free from the Connections section of the lobby.

LDPlayer is the fastest and the most stable emulator that allows you to run Epic Seven on your PC with little to no lag. It allows you to run the game smoothly, at high speed and high quality, and provides many amazing functions to help to have a perfect experience, whether you are a new player or not.

For newer players, it is recommended that you utilize LDPlayer's multi-instances function to reroll and have the perfect head start in the game. LDPlayer also allows players to adjust the game's FPS rate , allowing for smoother gameplay to go along with Epic Seven's HD quality pack.