What is LDPlayer Android Emulator?

LDPlayer is a software that emulates the Android operating system to run Android games on computer well.

With the continuous expansion of the game market and the development of the entertainment industry, many mobile gamers tend to enjoy the experience of playing mobile games on their computers. There are ways and tutorials on Google and you will find a product named LDPlayer. This post will briefly introduce LDPlayer and help you get familiar with this software. 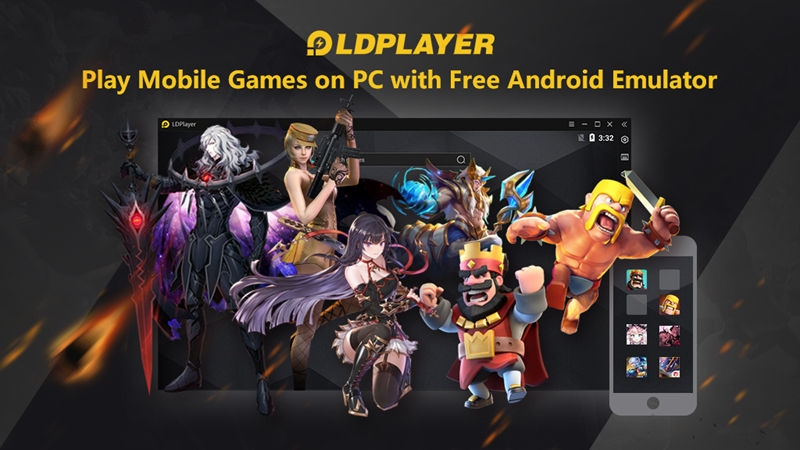 What is Android Emulator for PC?

An Android emulator is an Android Virtual Device (AVD) that represents a specific Android device running on PC. You can experience virtual Android operating system in your desktop or laptop using this type of software. LDPlayer is literally one of them.

LDPlayer is an Android emulator targeted at gamers. It does not just run Android on your PC but provide powerful gamer-oriented features. It includes good keyboard mapping controls and support for the latest games. You can also specify the virtual location of the device, simulate screen rotation, access the Google Play Store, and much more. The software let you run Android apps much faster on PC than your phone or tablet. Currently, LDPlayer is featuring version 3 and version 4.

Using LDPlayer, you will get:

- Android gaming on PC with keyboard and mouse

- File sharing between Your Windows and Android

- No fees to install and no worry about heavy advertisement There are different reasons for different users. In most cases, Android Emulator is developed for the gaming - oriented. In this way, players could play mobile games on the PC easier and faster.

But for developers, before launching a new android application or games they will test it as much as possible on various devices, and mostly they will try android emulator first.

The most common reason among players is that they can easily play games with emulator on PC, and no need to worry their devices’ battery life. And most importantly, they can enjoy the bigger screen.

The final main type is productivity. Any gaming emulator works as a productivity tool to an extent.

LDPlayer takes the security very seriously because our product is supported by users and any malware, spyware, or any sort of harmful programs with malicious intent is NEVER something that we will package with our LDPlayer. We’ve been transparent regarding what we offer to our players when they download and install LDPlayer.

LDPlayer support most main stream games on the games market, and usually shooting games are the most popular. For example, Free Fire for PC is the most popular game downloaded by players on LDPlayer. Many function settings of LDPlayer let you enjoy the best performance. LDPlayer is one of the Android emulators for PC on the market with better performance. Constant updating and optimizing of LDPlayer can bring players the ultimate gaming experience. Now, free to download LDPlayer to start enjoying Android gaming on PC.

Was this article helpful?
130 users found this helpful.
Yes No