Squeak is a newly released Mythic Brawler who is one of the best Brawlers out there in the game right now. With almost all of his abilities relying on AoE splash damage and an emphasis on zone control, Squeak has cemented himself as an excellent brawler for tons of different cases. If you have not checked him already, you can download Brawl Stars for free on LDPlayer. 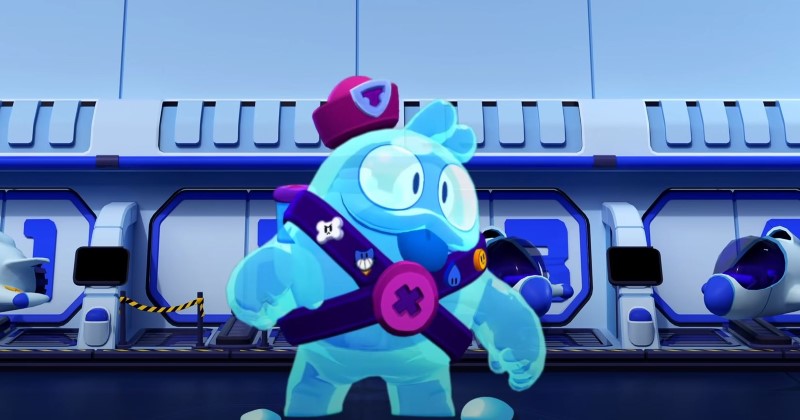 His Super, Big Blob shoots a giant ball that explodes into even smaller blobs with each exploding after a slight delay which is quite similar to his main attack. His Gadget increases his range and almost doubles up for 1 attack which is his next.

His first Star Power increases his attack damage for every Brawler that is caught in his attack while his second Star Power slows down enemies that are hit by his blobs.

Here are the basic stats for Squeak:

Squeak has unstable blobs of goo that blow up and deal a lot of splash damage. They also attach to any opponent they hit directly and to enemies that stray too close to them. His main Attack is by throwing a blob of goo around that ends up sticking to obstacles and targets and explodes.

The goo damages anyone in a 2.67 tile radius after a 1-second delay. They stop at the end of their range and explode no matter what they stick to. These explosions can also damage enemies who are behind walls. The blobs can also stack to other obstacles or a target until they end up exploding.

Squeak’s Super ends up throwing a Blob that after a short delay blows up with a higher amount of damage. The explosion of goo will also send six smaller Bombs in every direction. The giant ball will explode after 2 seconds In a hexagonal pattern that will travel for 6.67 tiles while exploding in a 1.33 explosion radius.

The blobs will also behave in an identical manner to the Brawler’s regular Sticky Bombs as well. Squeak’s Gadget increases the next Sticky Bomb’s range by a massive 100%. When you activate this Gadget, the range is doubled to a little higher than 15 tiles. The Gadget will glow above Squeak’s head and will signal the Gadget’s usage as well as your joystick glowing as well.

The Cooldown of this attack will start after an attack is shot.

Every brawler within an area of a Sticky Bomb’s explosion will increase the overall Bomb’s damage by about 10%. The damage will increase in a linear fashion to spawnable as well. The Star Power will also take effect if there is only one Brawler.

So, this means that Squeak will almost have at least 10% of a permanent extra damage boost for each attack he does. Secondary Sticky Bombs that appear from his Super are not affected by this Star Power whatsoever.

The secondary Bombs from Squeak’s Super will also now slow down enemies that are hit by the explosion for about 4 seconds straight with no repercussion whatsoever. Squeak is an excellent Brawler for safeguarding specific areas to not let Brawlers from entering. You can shoot attacks at particular hot zones making sure that enemies who want to enter end up getting damaged while they do so. For example, you can end up throwing Bombs at Gems in Gem Grab or Bolts in Siege too.

Your attack’s delay coupled with your Super’s area denial ability makes you an excellent Brawler for control.

What Game Modes is Squeak Good For?

The Brawler is absolutely ideal for most game modes like Heist and Siege because your Super can deal tons of damage quite similar to a brawler we previously covered, Spike. It has a wide area of attack and lets you clear through bushes as well. However, its delay does require some timing practice to be used efficiently.

You are unable to deal immediate burst/nuke damage since your attack is delayed and the fact that you deal below average damage. So, in in-game modes like Brawl Ball, you will not be able to defend your goal and prevent enemies from scoring. Plus, his lack of abilities makes it extremely easy for enemies to breeze through him without the fear of getting knocked, pulled back, or stunned.

If you end up choosing to play Squeak in the game mode, make sure you focus on closing off choke point rather than trying to front line.

The Power of Bombs:

If you end up trapping enemies, you can attack spawnable such as Pam’s healing station and an 8 Bit Damage Booster to help prevent enemies from going near them at all.

You can also use the power of the Bombs to stop enemies from teleporting. So, as soon as you see a teleporter activate after its cooldown has been used, throw your Sticky Bombs to it so that enemies start taking damage as soon as they exit it or avoid teleporting in the first place if they know there’s a high chance that a Blob might end up getting up in their destination.

You should always use your Windup Gadget with utmost care. The range of your attacks does not do a lot in helping you see where the attack might end up hitting. But, if you want to deal quick damage to IKE’s turret in the siege, you can utilize this to end up getting a hit on the turret without getting into his range.

This ability is quite useful to gain a lead during the last few minutes in the match. You can also use the modified new long-range to apply pressure on another lane while also covering one your in. This helps you support your teammates even if you aren’t close due to your range. Squeak is best played when fighting with multiple enemies at the same time. This is quite useful in a map that has tons of walls where enemies might often clump up. You can a lot of enemies and can charge your Super much quicker while weakening the enemy. The radius that you have also let you hit enemies that are behind you and to your side that are about one tall wide. This can be useful for anyone who is behind you.

Plus, since your attack is delayed, there’s a high chance that an opponent might try to take you down first. So, you should stay away from enemies especially heavyweights who can take advantage of the slow attack and counter it. However, this is still useful as Squeak can still force enemies away which is pivotal.

While your Super can cover most of the map fairly well, brawlers like Spike, Edgar, or Bull might have something else to say and pop out. So, make sure to sweep areas or stay in more open spots in most cases.

Your Star Power is also quite useful for clumped-up enemies. However, do note that this can only happen in a few certain situations. So, when playing Squeak in Duo Showdown, make sure to pick a partner that goes for a close-ranged burst damage dealer probably someone like Bull who can make up for the close-ranged matchups Squeak is not that good at.

Perhaps one of the best emulators out there, LDPlayer is known for optimizing its game to the absolute next level and Brawl Stars seems to be no exception. The Emulator features tons of exciting unique features that you can only explore while downloading. However, one such feature that is worth talking about is the ability to change your key binds and remap your keys to get a near-native PC gameplay experience on games like Brawl Stars and much more.

While Squeak is relatively new. He has proven himself to be an extremely controller that takes into account many of the efficiencies the previous had. He’s fast, quick-witted, and can be used to go for an extremely aggressive area of denial maneuvers.