To play any android game on a PC, you need to create a virtual space to run the Android OS. There are many methods out there, but the easiest and most effective way of doing this is getting a game-oriented emulator to run your games because they are hard-wired and customized to support playing games. 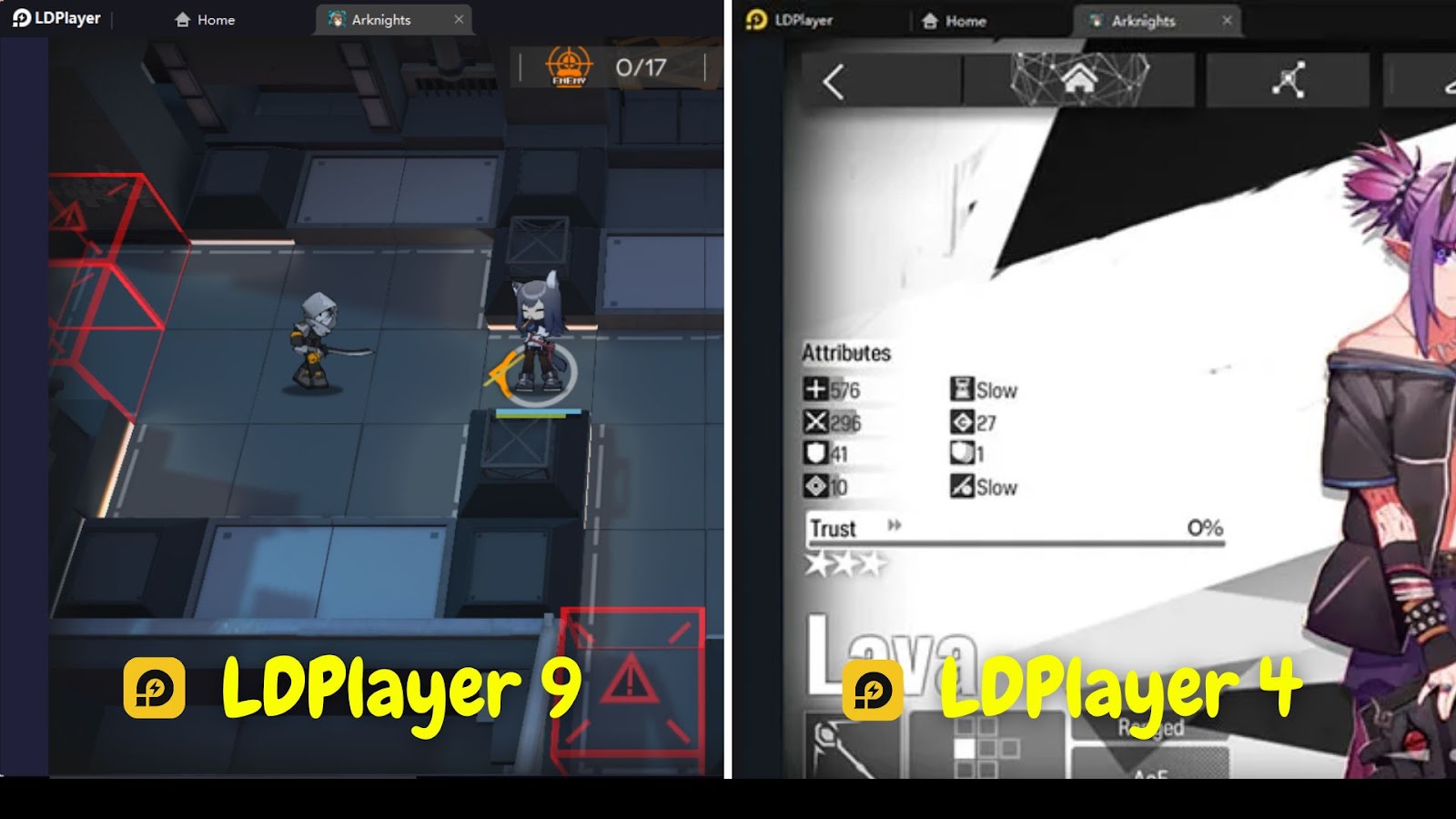 You've undoubtedly heard that LDPlayer 9 has been published and that it is the quickest and lightest version of our Android emulator ever—at least when compared to earlier iterations. But you may have a question or two like is it really a better version than LDPlayer 4. Also, how many enhancements were done to LDPlayer 9, and will it be useful for you if you already can play games with LDPlayer 4 smoothly on your present hardware.

In this post, we will contrast the new LDPlayer 9 with its previous version when it comes to gaming, looking at a number of factors like load time for games and lag, how it enhances and supports Multi-instance performance and resource use. To do this, we will use the game Arknights as the test subject. Our goal is to demonstrate to you how LDPlayer 9 performs through our own testing and data so that you can choose whether it's worthwhile to download LDPlayer 9. 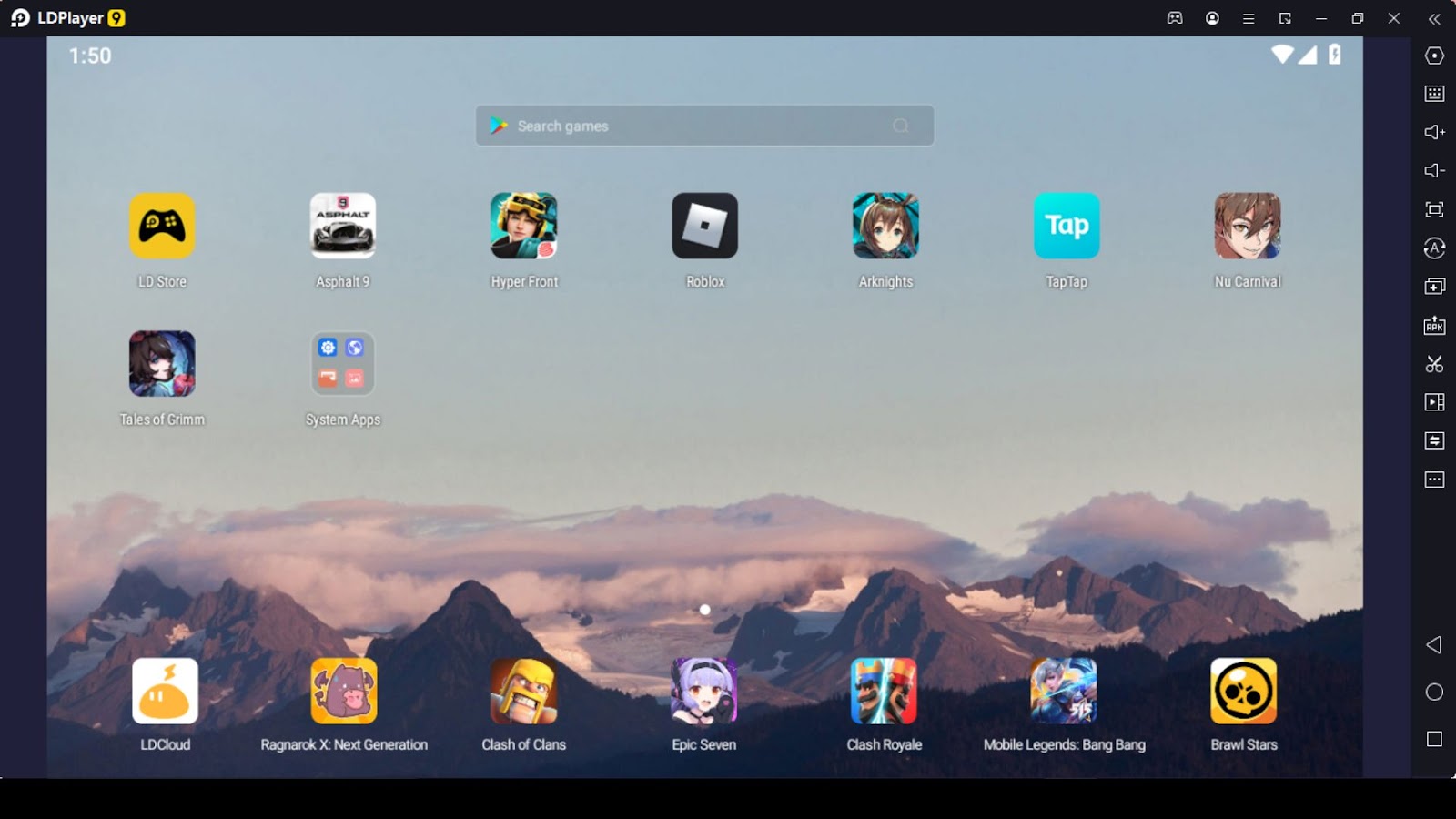 Let us start from the very beginning so we have some order and it will be easy to follow along. For any gamer, load time is the most annoying thing you have to go through while playing games or using any kind of app just because of this.

Some games nowadays have introduced some game elements you can enjoy while you wait on the loading screen. For example, an intro video or a mini-game on the load screen, but mobile games haven't come this far. As a solution for this, some gamers have started to never quit the game once they load it. Still, unless you have a beast of a computer, this puts you in a difficult position. 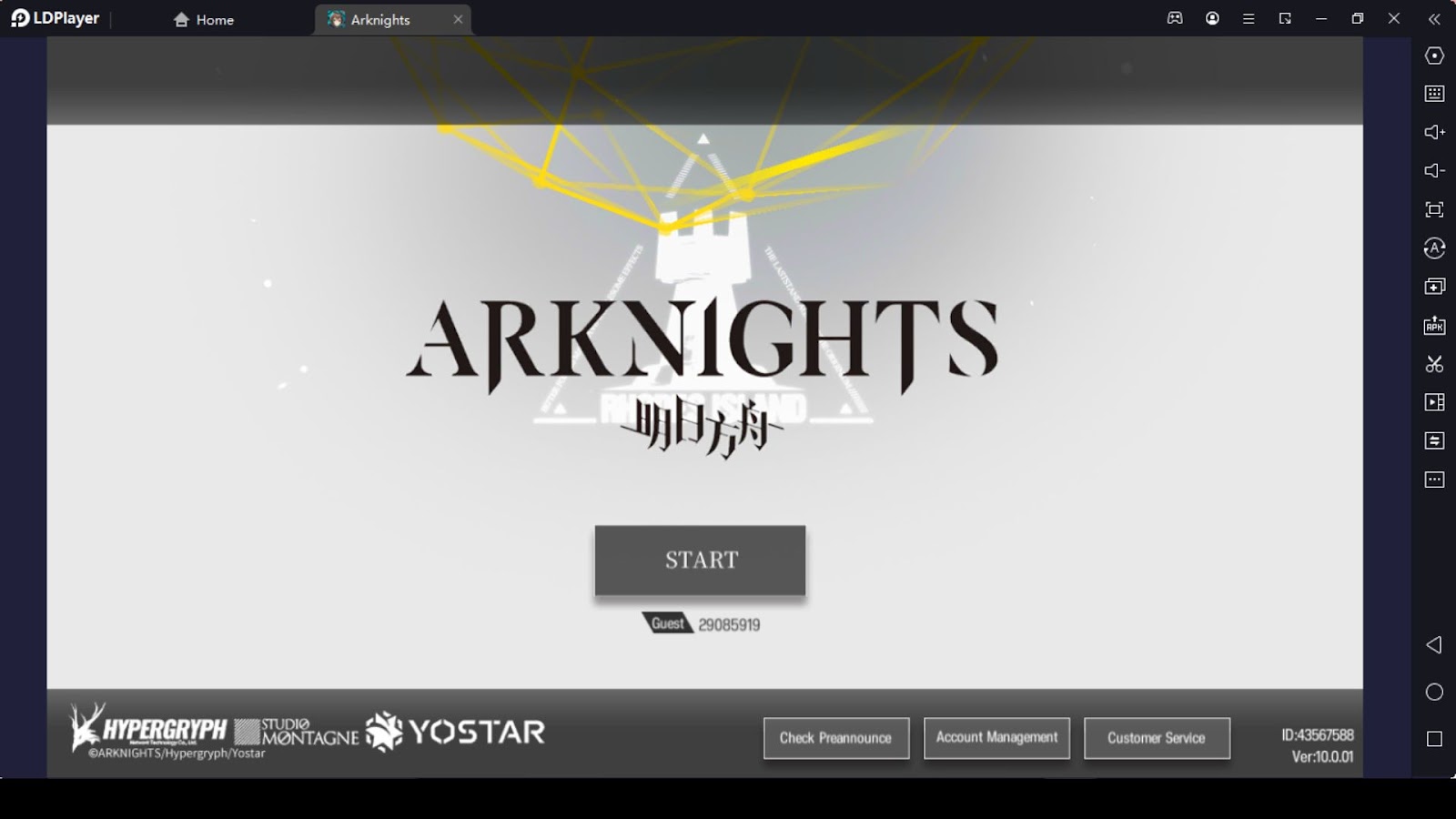 This is why LDPlayer 9 has worked on providing faster boot time for the LDPlayer itself and any game that would run on it. Same as for the gamers, this is a dream come true for LDPLayer developers because ever since the start of the LDPlayer, they have worked hard to provide a fast processing emulator; its older version was renowned as faster, but LDPlayer 9 has beaten them all with its processing speed.

It only takes 3 sec to start up the emulator, and according to our comparison, Arknights only takes 10 seconds to load on LDPlayer 9, and it takes 34 seconds to run it on LDPlayer 4. By contrast, LDPlayer 9 has cut down the loading time by almost 50%, and the transition between tabs and game options as soon as the game loads are much faster than LDPlayer 4.

No one should throw away its good qualities just because you have created something new. This is an important characteristic we can see in anything that grows. Same with the LDPlayer, they have managed to extract and incorporate all the good qualities of its previous versions to make LDPlayer 9 more powerful.

While we talk about CPU and GPU consumption for multi-instance, you won't be able to even run a single instance if your emulator can't manage the RAM usage. Although LDPlayer 4 and 9 both have the same amount of RAM usage for Arknight, LDPlayer 9 shows that it lowers the usage after a few minutes into the gameplay. So what that means is it's constantly trying to cut down the usage to optimize the RAM usage. 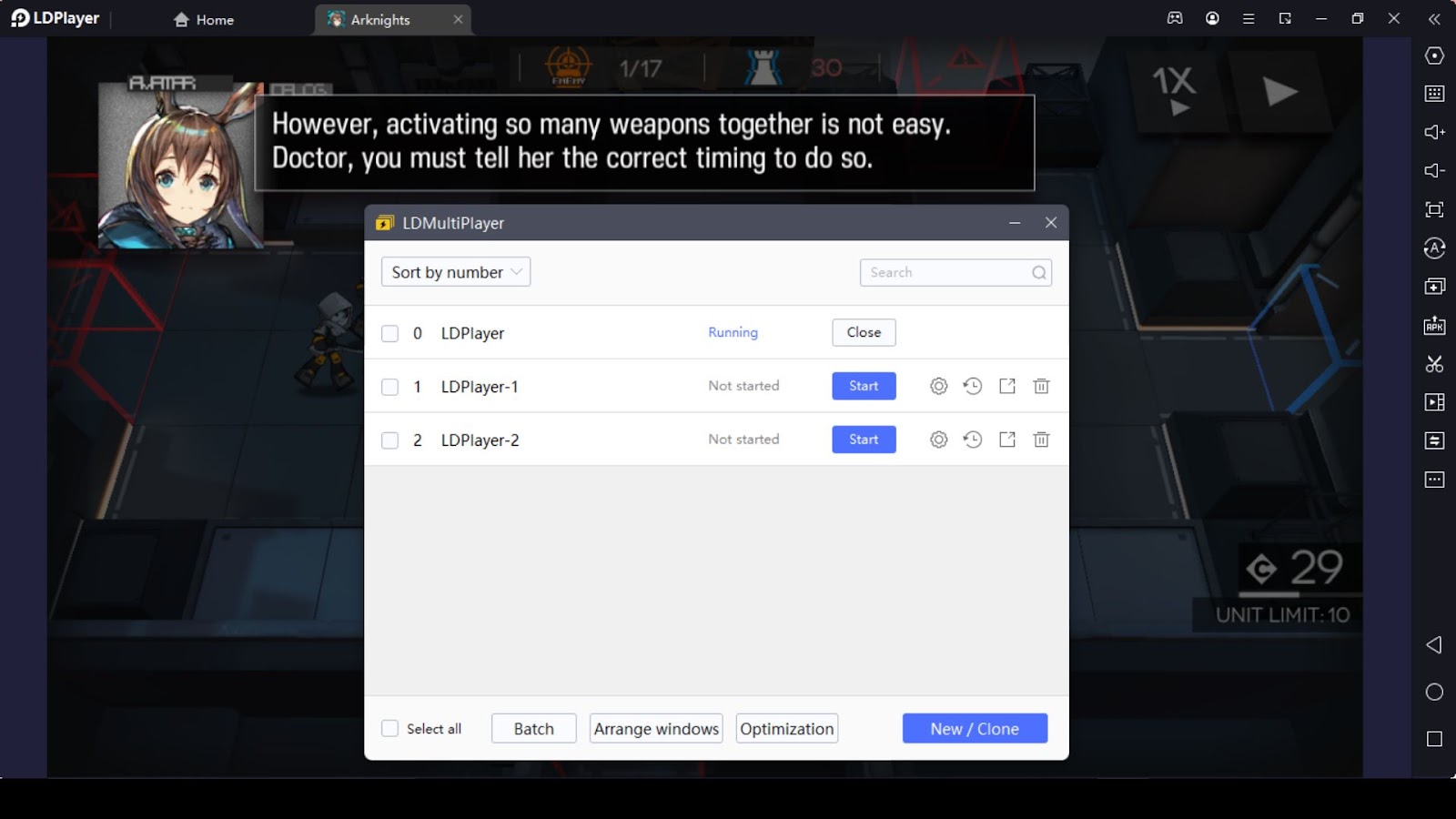 As we said above, this attribute helps the LDPlayer support Multi-instance more than anything else; even though the LDPlayer 9 is equipped with these features, you may have to allocate a little more resources than it defaults to get the smoothest experience.

To allocate resources to LDPlayer, go to the settings tab by clicking on the pentagram upper right corner. Then, give as many resources as possible to LDPlayer from the Advance tab according to your PC resources. And you can play many games while playing Arknight.

Activating VT on your PC is one suggestion for improving multi-instance and lowering latency. VT, formerly known as Vanderpool, is a technique that allows a CPU to behave as if it were several separate computers. It allows multiple operating systems to run simultaneously on the same machine.

The majority of newer computers already have this enabled, but to be on the safe side, go to the BIOS menu. The VT section in the BIOS is frequently identified by the names Intel(R) Virtualization Technology, Virtualization, Virtual, VT-X, or SVM. The "Processor Configuration" section of the "Advanced" option is where you may locate it. Once you've turned on VT on your machine, the emulator latency should often disappear. Your emulator will no longer cause noticeable delays when you use it to play mobile games on a PC.

How It Supports Playing Games

Save Space and Time

In the old days, when playing ArKnights, you had to get the 32-bit version of LDPlayer. When you needed to play a game with the 64-bit version, you had to get the 64 version of the LDPlayer to run it, but while creating LDPlayer 9, they used a 64-bit meta-framework, so you don't have to use two different LDPlayers to run 32 and 64-bit games. This helps players save the HDD space and time it consumes to install and maintain two versions.

LDPlayer 9 has more powerful graphic rendering technologies to recover game elements. It resolves the issue where some devices restrict it from using high-quality game settings when playing ArKnights. With LDPlayer 9, you can run the game at 60 fps of its maximum without needing many resources, unlike in LDPlayer 4. 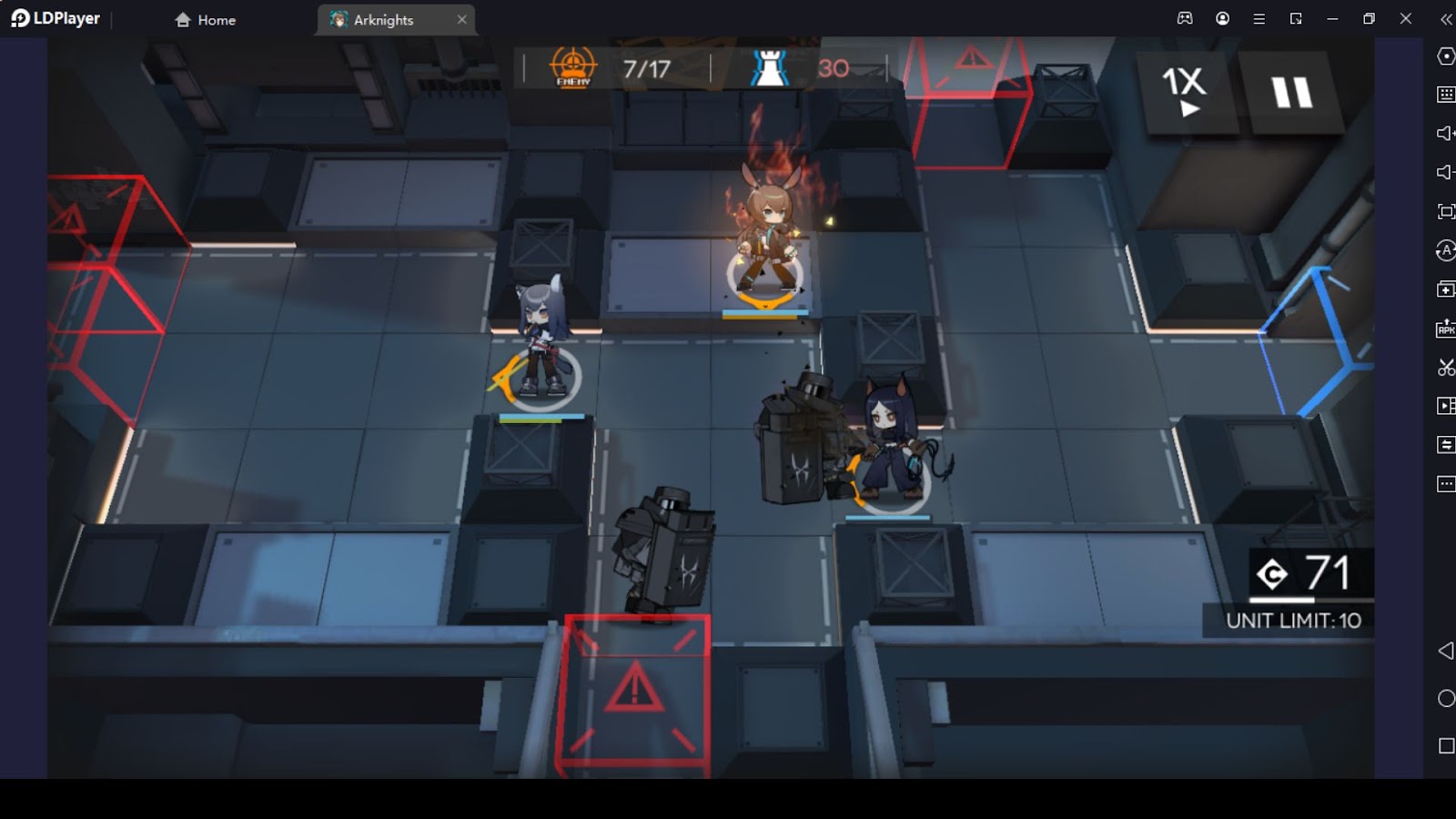 Even though you set the graphics to 60 fps, it consumes more resources to provide the same quality LDPlayer 9 provides with low resource usage. Additionally, it resolves graphic problems including pixelated images, poor clarity, and red spots.

If you already played Arknights on LDPlayer 4 and don't see the difference yet, updating graphics drivers might be helpful because, for your operating system to get the best out of them, you need to keep your drivers up to date. Additionally, updating your graphics driver will help your machine to deliver the most satisfactory gaming experience for Arknights.

Changing from an integrated GPU to a dedicated GPU should be your next step. In order to achieve the most pleasing Arknights visuals on LDPlayer, if you have a dedicated GPU, you might need to use your separate graphics to power up Arknights.

Hyper-V is a much-needed option for any emulator to run any game smoothly. In LDPlayer 4, you had to manually turn it on, and sometimes it causes the LDPlayer to crash. But now, with LDPlayer 9, it comes with VT already enabled, and it can provide the best experience to its players.

According to the topics we have discussed so far, we can see that LDPlayer 9 has managed to outperform and provide a smooth gaming experience for its users than the older versions of LDPlayer. LDPlayer is still new, and we can surely hope for many improvements in the future. So what are we waiting for? Let's move to LDPlayer 9 and get a smooth, fast, and powerful gaming experience with LDPlayer 9.