Mythic Legends is a brand-new role-playing game for individuals all around the world. We'd want to state up front that this game, such a sophisticated game, is the most entertaining game you've ever played since you might engage yourself in fantastic gaming scenarios, concepts, and narratives while participating on the battleground in this game. So, to improve your strength as a beginner and win the game, stick to this Mythic Legends guide with tips. 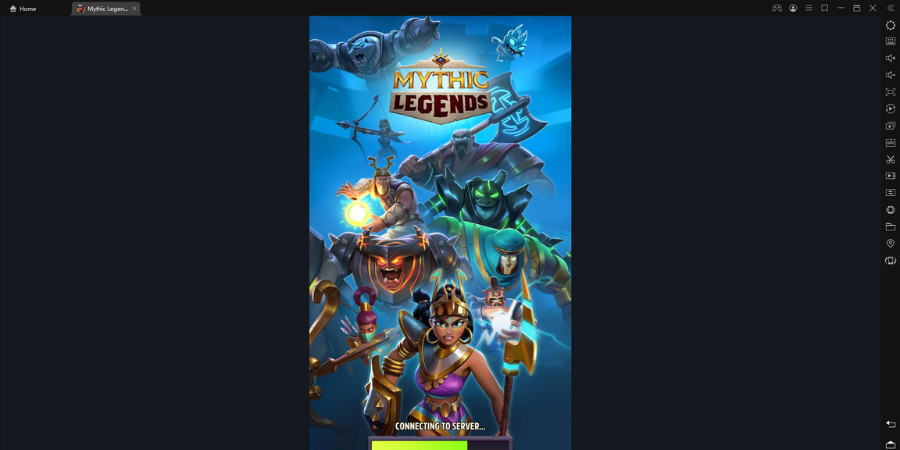 Before A Fight, Investigate Your Opposition's Team

Let's start with the first one in the Mythic Legends guide. Inspect your rival's power rating before going into a fight. This figure reflects how strong their deployed squad is, so you can see who has the upper hand in a war simply contrasting it to your very own power rating (presented beside the green fist over your username).

However, this number does not ensure who will win. There are many strategic elements that such ratings cannot account for, so you should continuously tap on your opponent's data box and examine their structure more closely.

Examining your enemies' Champions and configuration will reveal a lot about how they'll battle. What kind of champions do they have there? What level do they belong to? What kind of formation do they have? What are their interactions and artifacts? This info says a great deal about the opponent team's fighting style and its strengths and limitations. Use it to customize your approach for this battle. This will be far more beneficial than expanding your Power rating. Let's see the next tip in the Mythic Legends guide. 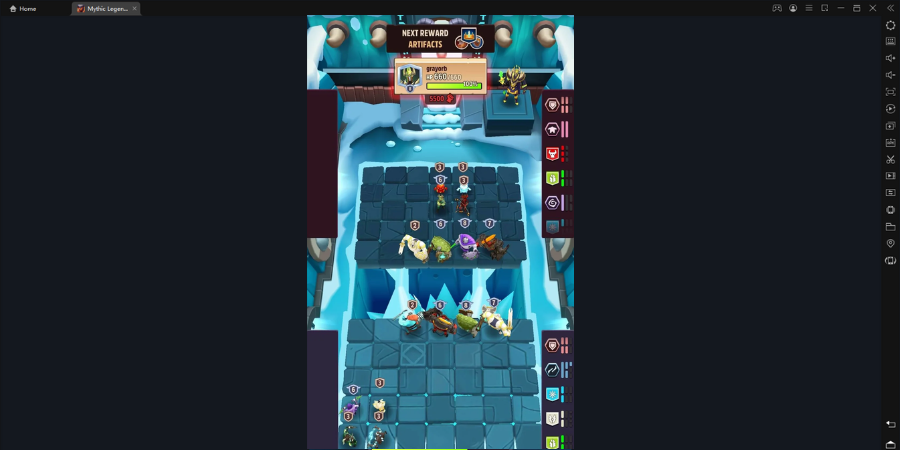 The next tip in the Mythic Legend guide is to focus on improving your champions. You will have an advantage over your rival if you get more synergies plus synergies of greater levels. It's also critical to have many champs on the board. You can presently have up to 5 Aces on your board. This quantity can be increased by updating our legends.

Although if your Legend doesn't participate on the battleground, they provide benefits to your Champions throughout the battle. As a result, upgrading them to receive more help is the ideal option. You'll require sufficient Gold and character cards to enhance your Legend.

Legends that have been improved can now accompany six champions to help you defeat your rivals. So, on the battleground, strive to put those six heroes in more efficient and reliable locations. You may rank up your champions more like the Legend. Whenever you truly want to level up the champions, click them. 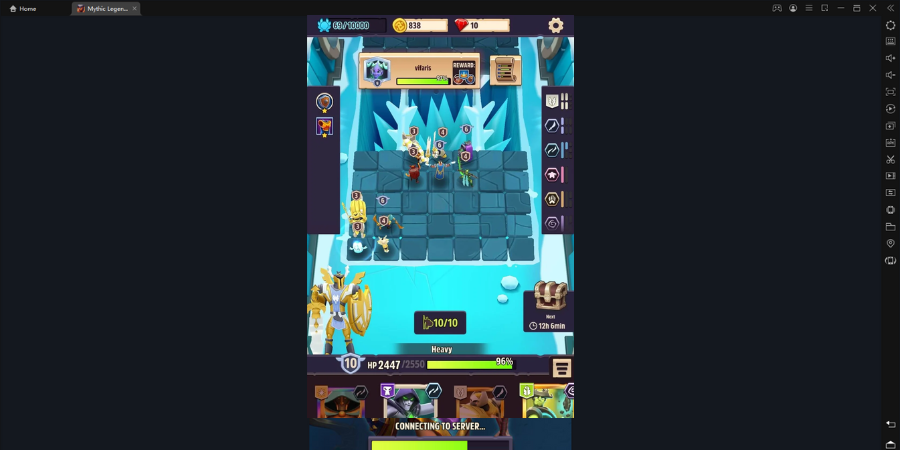 In Mythic Legends, each level is a unit. So you can improve your champions in these forces to injure and crush your enemies.

Whereas a lot depends on individual technique and style of play, the rarer the Champion is, the stronger it is. However, Mythic and Legendary Champions are generally better due to their tremendous special powers, so knowing how they work is critical to maximizing their combat effectiveness.

Players are going to have a legendary card with them for each round  and they can be used to have an artifact to the field. So, to acquire more legendary cards, attempt to select the characters with the highest level. So it leads to having more and more legendary cards and those cna raise up the champion powers and their performance. 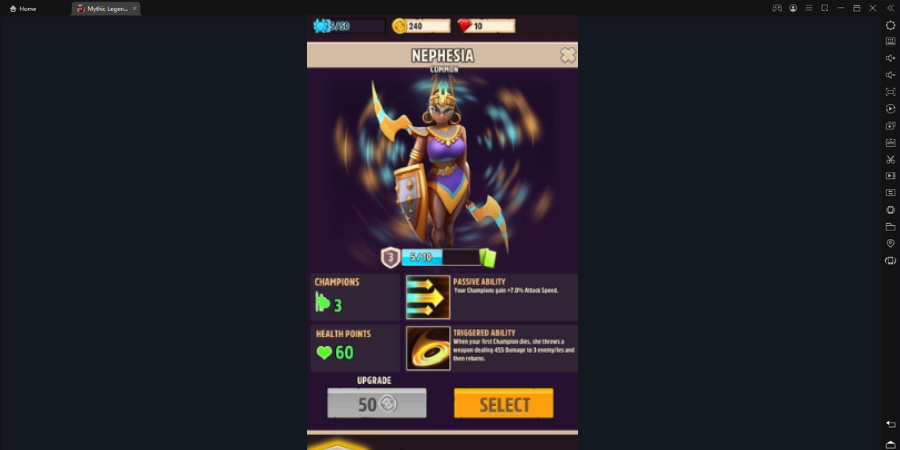 Artifacts are a unique aspect of this RPG game, so you can choose more useful artifacts just on display to increase your strength. Players can see three types of artifacts as Defense Boost, Empire crown and as the Achilles Armor. Here on the monitor, there are three artifacts. Please make an effort to evaluate and pick them.

When this comes to the Empire Crown, being near to certain other Empire Champions can get you 20 points.

With the Defense Boost, you could increase the defensive level of your champs by 100%. This is not restricting any class or any region from the players. If you choose the Defense Boost, every one of your warriors will receive perfect defense.

First, from the start of the game, you can get 1000 percent defense for random champions in the Achilles Armor area. This is also the easiest and most effective relic for enhancing the abilities of your champs and legends. 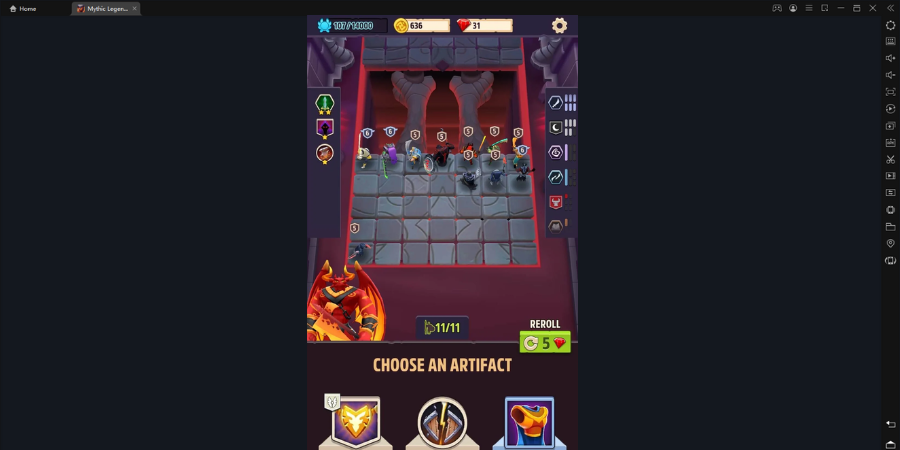 While it's possible to deploy solely melee fighters, typical configurations would include as at one ranged unit, and it's critical to protect them, but if you're purposely deploying them as bait. You can put them alongside melee units, particularly Knights, to defend them from frontal attacks (at least at first). Your ranged units can also be placed on the back wall or in the Battle Board's rear corners. This is very beneficial if your enemy's ranged units have lesser ranges than yours.

The final tip of the Mythic Legends guide is ignored chiefly but valuable. The post-combat statistics show how another Champion and Legend fared in battle. The fight outcomes panel has a small green button that can be tapped to see these. The Conflict Stats page has three tabs: 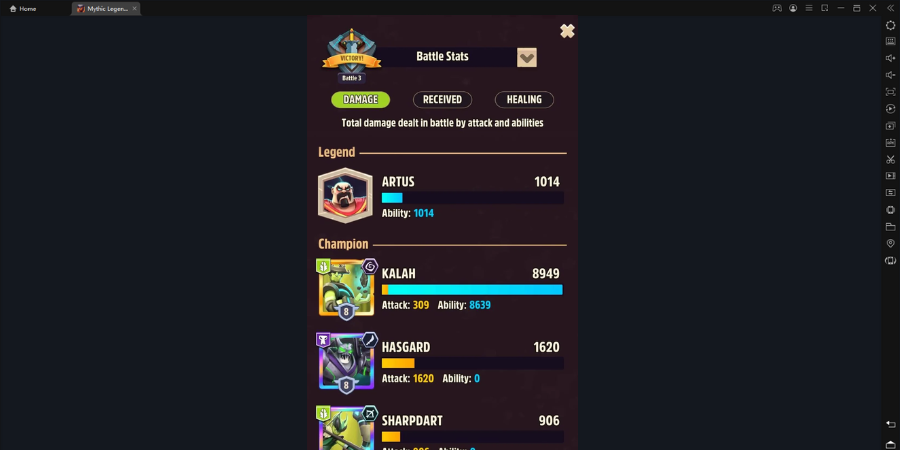 If you lose, this screen is very informative because it allows you to see whichever of your Champions are failing and which opponent Champions are the most successful over you.

For the battles, the best option that remains for you is the best android emulator: LDPlayer. This one will give you the option of controlling all the repeating actions with one key, and that is why you will gain the chance to take control of your battles. The Keyboard Macro Commands will do the necessary things here, and you are going to beat your enemies best through this fantastic feature.

Mythic Legends was always able to experiment with highly effective solutions for overcoming the game's challenges. Having a great guide would help to move further in the game. So, in this essential Mythic Legends guide to killing opponents quickly and effectively, here are some more practical ideas with some exact progressive methods. Mythic Legends Global Release is May 17