Genshin Impact recently held their monthly Livestream, detailing all of the new features and characters coming in the next update. This update is named "Perilous Labyrinth of Fog" and released on 13th October 2021. This update includes a new island of Inazuma, Tsurumi, alongside the new character banner, weapon banner, and new mini-game events. Let's look at all of those.

Childe/Tartaglia and Hu Tao are two of the old characters who return in this update. This is surprising because it's Childe's third run, and fans were expecting characters like Yae, Albedo, or Ganyu. However, some fans are ecstatic. They will get another chance to have him because they were unable to do so previously.

Hu Tao is one of the more popular characters, and she's believed to be getting a re-run now that Halloween is approaching. Thoma is the third and most recent character to join Hu Tao's banner. He's a 4* Pyro vision holder with Polearm as his weapon. He's a support and sub-DPS character that was first presented during the Inazuma Archon quest. He'd be a terrific addition to your team, and being a 4*, he shouldn't be too difficult to obtain. Aloy, the free 5* character, will be available to pc and mobile players in the 2.2 Update. 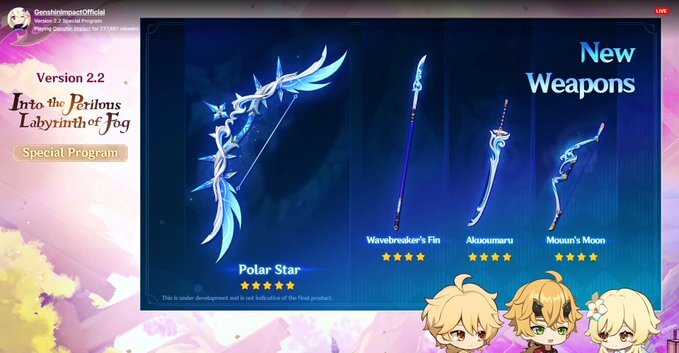 Childe will finally be getting his signature bow called "Polar Star" which will be 5*. Alongside those, there will be the 4* weapons called "Wavebreaker's Fin," "Akuoumaru," and "Mouun's Moon." More will be revealed about the weapon soon. 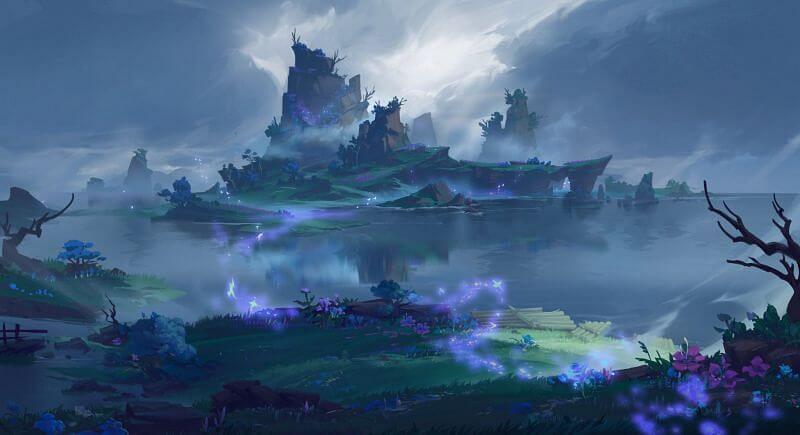 In the Livestream, the voice actors mentioned that you can encounter a lot of "unprecedented challenges" while you explore this area. The island is covered with fog with a lot of beautiful scenery around it. Tsurumi Island has been abandoned for years, so when it arrives next week, it will be one of the better sites for interested players to visit.

The island is also filled with the new monsters introduced to the game, Rifthounds and Rifthounds Whelps beasts. Shield characters are a preferable choice for your voyage to Tsurumi Island since if your character is attacked by enemies, you will receive the "Corrosion" status and lose HP over and over again unless you have a shield.

The Traveler and his friends will enter the Mystic Onmyou Chamber to battle powerful opponents who have been trapped within in Labyrinth Warriors. This dangerous domain is unpredictable and complex. But to make it easier, you'll be joined by Childe and Xinyan. You'll also have the company of a peculiar paper figure known as "Shiki Taishou," who can offer special help and buffs. This event rewards include Primogems, Crown of Insight, Mora, Hero's Wit, and a free Xinyan. Mihoyo has finally included Xinyan in something after ignoring her for so long.

Shadow of the Ancient:

The Adventurers' Guild's Katheryne appears to be having difficulty coping with a particular investigating commission. This quest involves reviving Ruin Grader and you need to research to find out a way to defeat him. The Shadow of the Ancients event will be held on Tsurumi Island and will revolve around ancient items that must be researched. Players will use a Sumeru scholar to explore out areas, locating components, and complete devices. The event rewards include Primogems, Hero's Wits, Mora, and more.

Tuned to the World's Sounds:

Following the end of the incident in Inazuma, Kazuha returns to Liyue with The Crux. However, he has sent a short note to his fellow sailors, asking them to keep an eye out for you. This event's gameplay will be the same as the music one from the Windblume Festival Event, but this time, you can play alongside characters like Raiden, Zhongli, Keqing, etc. Once you complete the event, Kazuha will reward you with a new lyre called "Floral Zither". The event rewards include Primogems, Mora, Hero's Wits, and more.

Sakuya, an Inazuman florist, is planning a new promotional effort to advertise her shop, "Sakuya's Flowers." This event will include a lot of collecting seeds and flower arrangements. You can also share seeds and flowers with other friends. The main reward of this event is a piece of furniture to keep your flowers in your Serenitea Pot.

This event is your usual Ley Line Overflow where. You will receive double the rewards after completing the open-world Ley Lines Blossom of Revelation. It's a great way to farm for Mora or Hero's Wit. You can only get double the rewards 3 times a day. 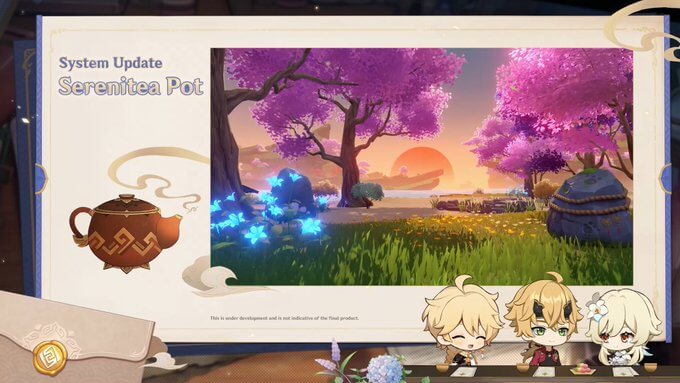 This new layout is Inazuma-themed and can only be unlocked after reaching level 40 on the Sacred Sakura Tree. Alongside this stunning layout, many new Inazuma style furniture to fit that aesthetic and a new way to collect Blueprints with the help of a new type of chest called the "Remarkable Chest." Blueprints can be obtained through the Forge, the Crate Furnishing Menu, and the Crafting Bench. A new furniture type called "Floating Platform" has been added, which allows you to place furnishings on a floating platform.

Overall, this seems like an event-full update with a lot of new quality of life stuff being added to the game. While some players are dismissing the update as a filler, others are delighted with the events and reruns taking place and have already begun saving for their favorite characters. If you're saving for either, I hope the gacha gods give you what you want. Happy Gaming!