Gemstone Legends is a Match 3 styled puzzle RPG that revolves around solving tile-matching puzzles to defeat enemies. Matching 3 tiles or gems in a row is not as simple as Candy Crush, but in Gemstone Legends, it requires a lot of strategic thinking. As you progress through the campaign, the enemies you encounter will become stronger and tougher to kill. At that point, simply matching gems with one another may not be enough to win. 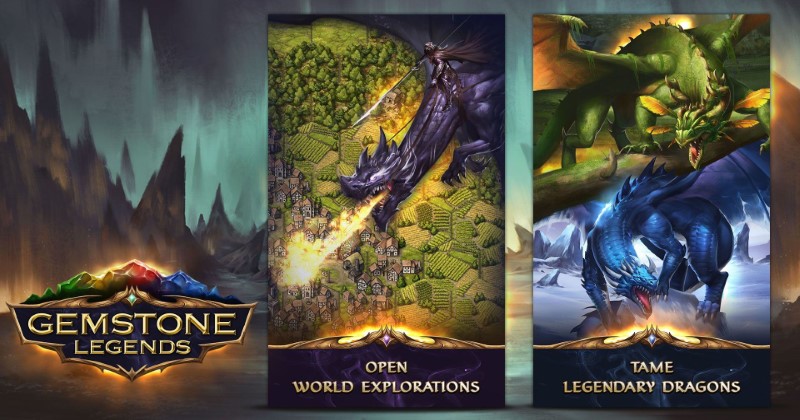 To win these difficult fights and make your battles easier, this guide provides in-depth analysis to help you learn some common things to avoid and increase your chances of winning via some essential tips. Especially If you’re starting new and don’t know much about the game, skip down to the second section first, which is very important for you.

In the following section, we will tell you some essential tips to increase your chances of winning and making your game and heroes more powerful.

You need always to consider which heroes are part of your team and their base color, considering it can propel your game much faster. Depending on a fight, you bring in more of the opposing color. For example, if you're going to fight Vermin, the Ruby Dragon, you need to bring as many blues as possible to get that 60% damage stack for a devastating amount of damage. You can always check the detail of the enemy you will face and check its stats beforehand.

This way, you'll have the information you need to guide you in composing the best team of heroes for the coming battle. We recommend forming a team of mostly Attack heroes so that your team can quickly wipe out weak enemies while forming a heavy Tank team of heroes give more protection and DEF abilities to the entire team while adding an attacker with support to round off the team. In the end, a balanced team comprising of attackers and tanks along with a specialist or support.

Artifacts are primarily equipment pieces you gear your heroes with to increase their base stats which You are rewarded after Completing missions and objectives. Similar to other games, Gemstone Legends have types of gear in the game and which follows a “set” system meaning these pieces belong to a specific set, and whenever one of your heroes equips some or a few of them, they create a set for your hero is given a bonus stat some other special boon and power. 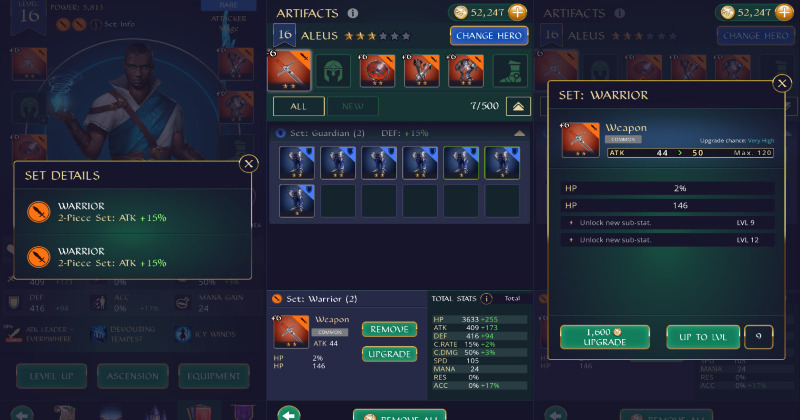 The set-piece bonuses can be explained simply with the help of the following few examples of different set pieces, as shown below.

To win efficiently, you have to equip heroes like a Tank with Guardian artifacts, provides a 15% DEF bonus for each set while warriors can either go for Berserker or Brave set pieces to give them either +45% ATK and +20% HP Decrease or give +20% ATK and +20% DEF.

Power Overwhelming – You can increase the power of your artifacts by leveling them up with gold which increases its stats and can be done up to level 15. Leveling till the 3rd level is a sure shot, but after that, RNG steps in. any level higher than 3 has a chance to fail, which increases with levels increasing the gold cost in the meanwhile. Failing to level up Artifacts loses the gold spent on them, which is another way to steer you towards pay-to-win mechanics. 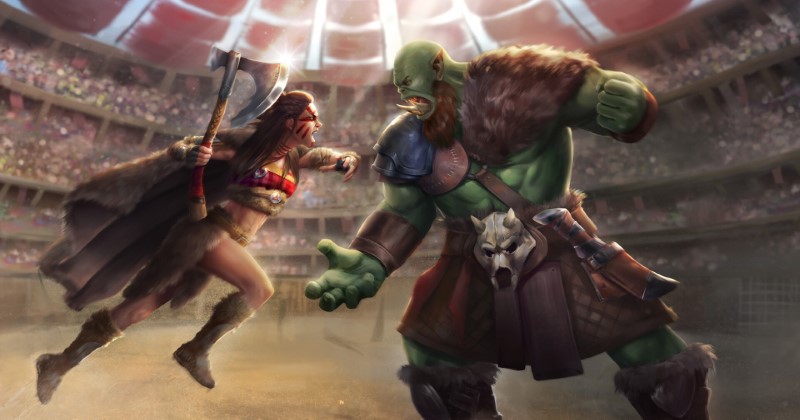 Depending on the Artifact rarity, higher rarities can have additional sub-stats where green has only one. Common ones don’t get a sub-stat at all, no matter how much you level them up. Fully maxed, a legendary piece of gear has three sub-stats, further increasing the Artifact's power.

The power of a hero can be increase through leveling up heroes. They gain more stats per increase in level. This makes them powerful and can take on more powerful content and, in the meanwhile, increase your chance of victory. The leveling up is acquired by gaining XP from different missions and activities. You can also feed your heroes training dummies and additional non-used heroes for a decent amount of XP.

Multi-battling is one of the most efficient methods of farming XP. Multi-battling is a feature that you can run as many times as your energy meter allows you, which runs in a loop for a limited number of times, automatically done by the game and even allowing you to speed up the process.

The first mistake you can make is ignoring the colors of the heroes and their affinity and how much this matters because if you’re not careful, you might do reduced damage and can’t reap the benefit of increased damage. The AI will exploit these and is pretty aggressive in this game.

So be careful when matching gems, as the special skills and gems you match during any hero's turn can have increased damage or boosts if you're attentive. There is a simple tooltip that you can access in the menu, which also tells you these affinities.

Let’s write one example down for your ease.

You can see more information in the tooltip of the game.

The next mistake you can make is not using your multi-battle function provided to you generously by the game every day. You are given a certain number, 15 to be exact, auto-attacks every day, so string them together wisely because the game gives you a lot of options in the multi-battle like choosing and setting the priority of which heroes to level up and which heroes to switch into the team with max level heroes, among many others. It’s also a great way to gain more Artifacts every day. 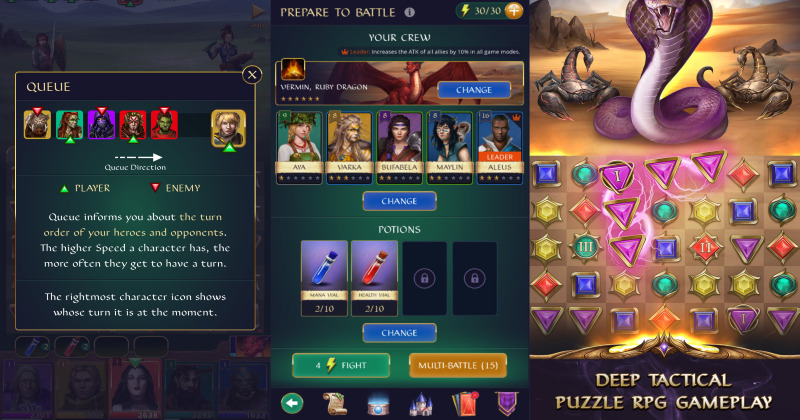 Don't claim XP boosts from your inbox, as they'll immediately activate and start providing you with increase XP gain for a certain number of hours. That’s the time when you utilize your multi-battle tickets or do a bunch of farming as you’ll get the most out of each of them.

This is a common mistake as you don't normally upgrade your training grounds. You are running around gaining XP from your missions and other quests because the training grounds have four slots available to you where your heroes can passively gain XP. You normally spend gems for other stuff and pulls, while if you spend up to 3600 gems to unlock all the slots, this will benefit you much more in the long run. This is also used to develop feeders to be used for ascensions. Just check your training camp periodically, and you're done.

Done use heroes to level up heroes as most of these heroes can be trained in the training camp to be used for ascension, which is more profitable because that’s where you bypass the need for ascension items. Use scrolls of XP instead and multi-battle and the training dummies whenever available.

Join a guild as soon as you can, do that as soon as you unlock the option. The first thing you get is guild coins that you can use to buy stuff from the guild shop. The second thing you get is free energy and gems from checking in each day, another way of getting an influx of resources without doing much. The last thing is you get to participate in the Raid boss and just by joining together with your guild gets you rewards. By not doing this and making this mistake, you are losing out a lot.

Gemstone Legends is a match-3 puzzle RPG that relies heavily on matching gems by dragging a gem from one slot to another row or column slot, which requires dragging and dropping mechanic, which can be cumbersome sometimes. LDPlayer has great features for problems such as this and gives the option of using your controller to do the inputs, and while your Special Power bar fills up by matching corresponding gems, you can use the key-binds feature to quickly tap the corresponding key unleash that Ultimate Special Skill on your enemies.

Another important feature by the LDPlayer that can help you quickly do stuff when you are loop farming is to use macros to increase the speed of your inputs and have as little downtime as possible in your farming.

Through this guide, we have explained to you a few things in the first section that you should do to make your team as strong as possible. While in the second section, we have tried to minimize the damage inexperience can do by letting you know common things or tricks to avoid.

In a crux, whenever forming teams, strategically devise your team plan, make it around the content's color you're fighting against, and remember to farm Artifacts and equip them with it. Doing these tips and tricks, along with keeping away from the mistakes, will help you win any battle in the Gemstone Legends.