With the Lunar New Year celebration going at full force and celebratory atmosphere all around the gacha games scene, Fate/Grand Order is holding its own brand new New year event with the release of the japanese centric event - Little Big Tengu. With the release of the event, players will be able to participate in a 100-mission based event and obtain the free welfare servant - Kiichi Hogen. In addition, a special brand new limited rate up banner will also be available during the event period - featuring the 5* Avenger Taira no Kagekiyo.

In this guide, we will go over the details regarding the event of Little Big Tengu and show players how they can best obtain all of the events from the event and how they can finish all 100 event missions from the event in order to obtain and keep the welfare servant Kichii Hogen. In addition, we will also debate and advises on whether players should roll for the brand new 5* Avenger on rate up for a limited time - Taira no Kagekiyo. 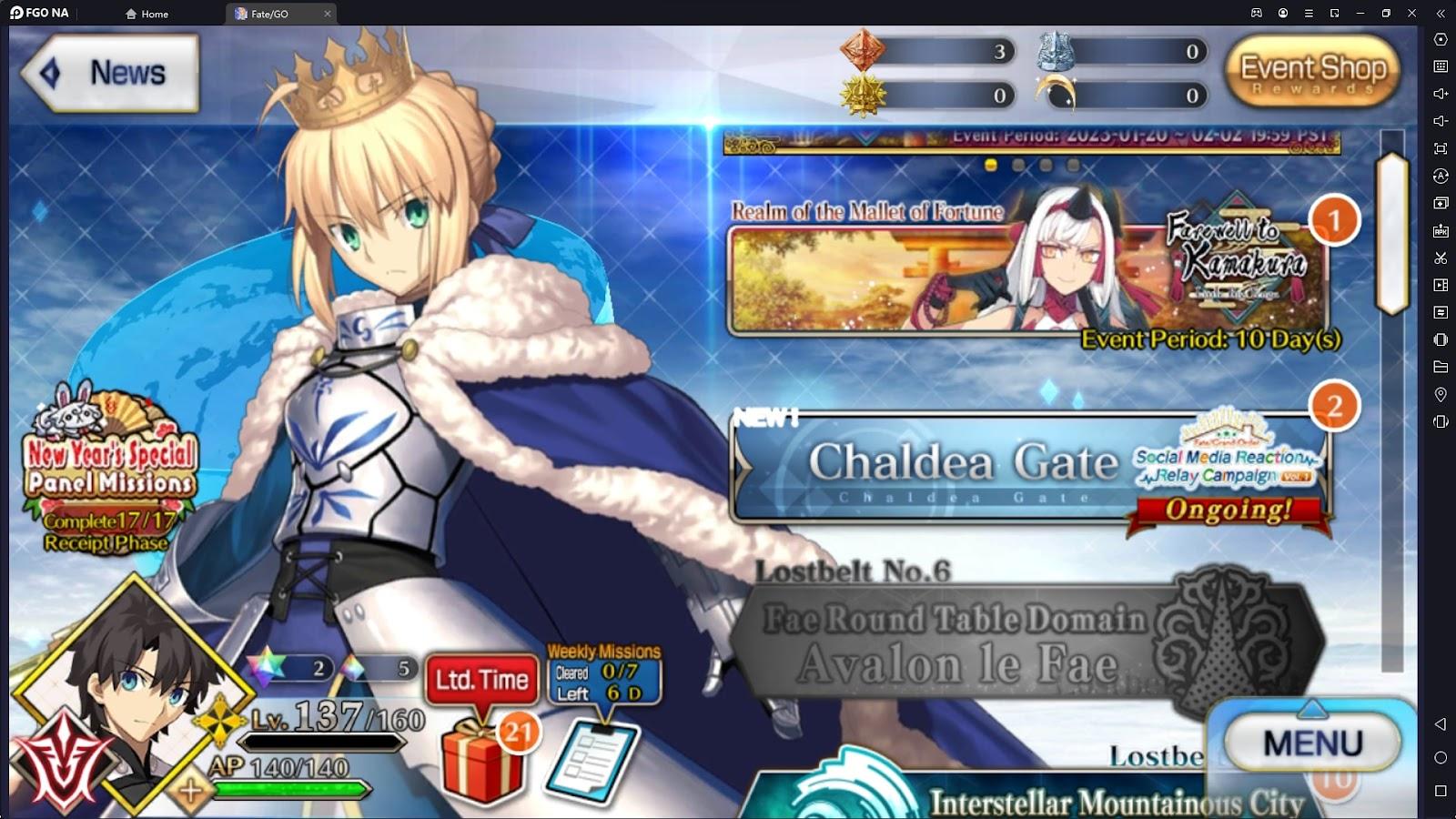 Let’s play Fate/Grand Order on PC together and find out.

During the event period, special story event quests will be available for all players to play and clear. It is required that players clear all of the event’s story quests in order to advance further in the event’s story and to ultimately obtain the permanent copy of the welfare servant Kichii Hogen. Each event story will have a time gate and mission gate with the time gates being released gradually during the first week of the event and the event gates can only be unlocked after players have cleared certain missions or a certain amount of missions.

Once all of the event’s story stages have been cleared, players will unlock and keep the welfare servant Kichii Hogen permanently.

During the time you progresses through the main story, specific farming stages will be available for 40 AP each to help you to farm for the primary event currencies of the event, allowing you to exchange for special event rewards from the shop and to be spent to unlock the event specific bounty missions. As mentioned above, special event currencies can be obtained by the players by clearing farming stages and these currencies can then be used to exchange for special event exclusive items within the event shop, allowing the players to obtain the event limited CEs that have special properties within the event’s settings as they can boost the appearance rate of enemies monsters in stages by up to 100%, increasing the amount of currencies players can obtain,helping players to clear the main story stages and farming stages more quickly and efficiently. The Welfare Operator of the Little Big Tengu event, Kiichi Hogen herself is a tengu with the ability to clear large waves of enemies with her kit and noble phantasm focusing on dealing massive amounts of quick damage to enemy waves and regaining NP. Kiichi Hogen essentially serves as a free to play option as a Quick based farmer for players who are lacking in a good AOE quick farmer or the assassin class. Her kit allows Kiichi Hogen to buff herself with a 3 turns quick up buff which improves her Noble Phantasm damage output immensely. In addition, Kiichi Hogen 2nd and 3rd skill buffs the entire team with an attack up buff and a NP generation buff, allowing the party and herself the ability to regain Noble Phantasm faster, perfect for any 3 turns Quick based farming team comps.

Kiichi Hogen’s Noble Phantasm, aside from its ability to deal massive amount of Quick damage to enemies, have another utility in the ability to remove all enemies’ defensive buffs, allowing her to strip the enemies of anything that may hinders the team’s damage output and help the team set up for more damage.

With the Little Big Tengu Event being released, a special rate up banner will also be available for all players to attempt to roll for the brand new 5* servant - the 5* Avenger class servant Taira no Kagekiyo Taira no Kagekiyo is a 5* Avenger class servant that excels at solo contents and challenge quests, with her entire skill kit and abilities relying on a special buff that can only be activated upon her death, allowing her to revive and deal massive amounts of damage on her Noble Phantasm depending how high her power stacks are. Taira’s kit revolves around her own ability to boss kill with her critical hits and noble phantasms that have been boosted by her skills’ massive buffs. Taira’s first skill is her main skill as it increases her damage against Genji trait enemies, increases her critical hit damage by a massive 100% and she gains 30% NP gauge. Taira’s 2nd skill grants her guts status which will revive her when she is defeated, in addition, when she is revived, she will obtain the “mark of vengeance” buff which enhances her NP damage output for every mark that she have, allowing her to deal massive of NP damage when the stacks are high enough. Taira’s 3rd skill grants her some survivability with evade buffs and further enhances her damage output with an attack buff.

Taira’s noble phantasm is a simple one as she deals massive amounts of Quick Noble phantasm damage to 1 enemy, dealing extra damage based on the amount of “mark of vengeance” stacks that she has.

No, you shouldn’t. As laid out during the top 5 servants of 2023 that players should roll article, this year in Fate/ Grand Order is filled with powerful servants that excels at different thing which includes boss killing, making it essential for players to save up their currencies to prioritize the top powerful servants of this month rather than spending your currencies too soon. Unless players really like Taira, you shouldn’t roll for her.