Doomsday: Last Survivors Tier List of Heroes for the Survival

It is again about a zombie turnover, and this time it comes with Doomsday: Last Survivors. Zombies have already taken over the world, and we have to survive through a game full of real-time strategies as well as an online competition. We will need a powerful hero for survival, and to have them, we must go through a Doomsday: Last Survivors tier list. So here is your tier list to make your lives safe as well as to save the world with humanity. 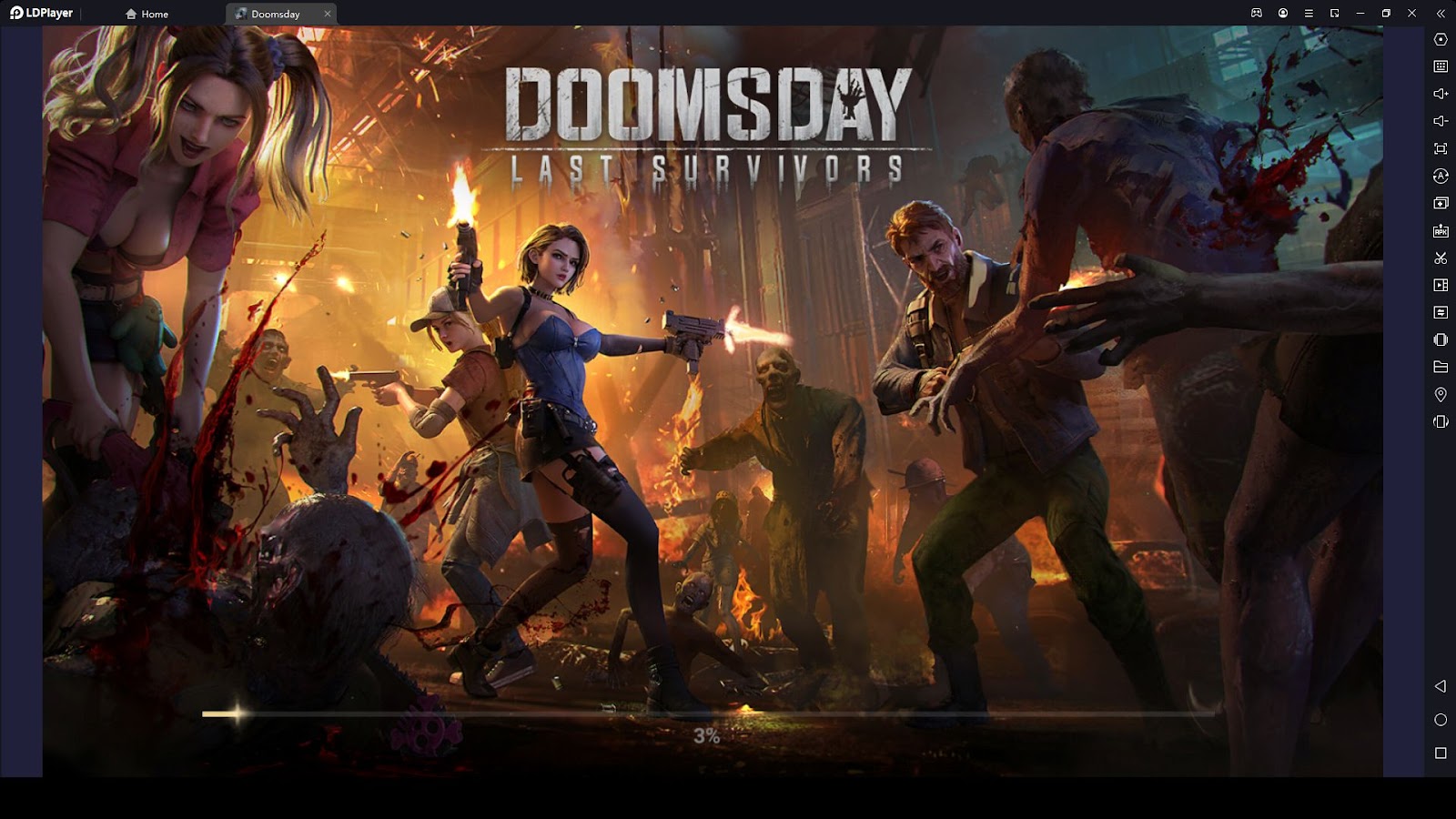 Doomsday: Last Survivors has a range of heroes in it, and you need to find the best and the strongest ones from them because you clearly have to survive. Not every character will be the same because they will be different in their appearance, traits, and strengths. Since the overall functions of the heroes are ideal for one another, it is wise for a player to know each of them one by one, and from this Doomsday: Last Survivors tier list, we will take you through the best of them so you can make it a more successful choice.

You will have to go through a gacha system to earn your heroes in this game, and every hero will be different from one another in the way they act in PVP as well as in the campaign. Since it is always required for you to do your best in this game to either earn rewards or survive from the best, this tier list will help you do better, and there is no need to have more discussions here. Note that the Doomsday: Last Survivors on PC is now available with LDPlayer 9 to make it more advanced and optimized with your gameplay. Let’s get straight into the Doomsday: Last Survivors tier list from now. 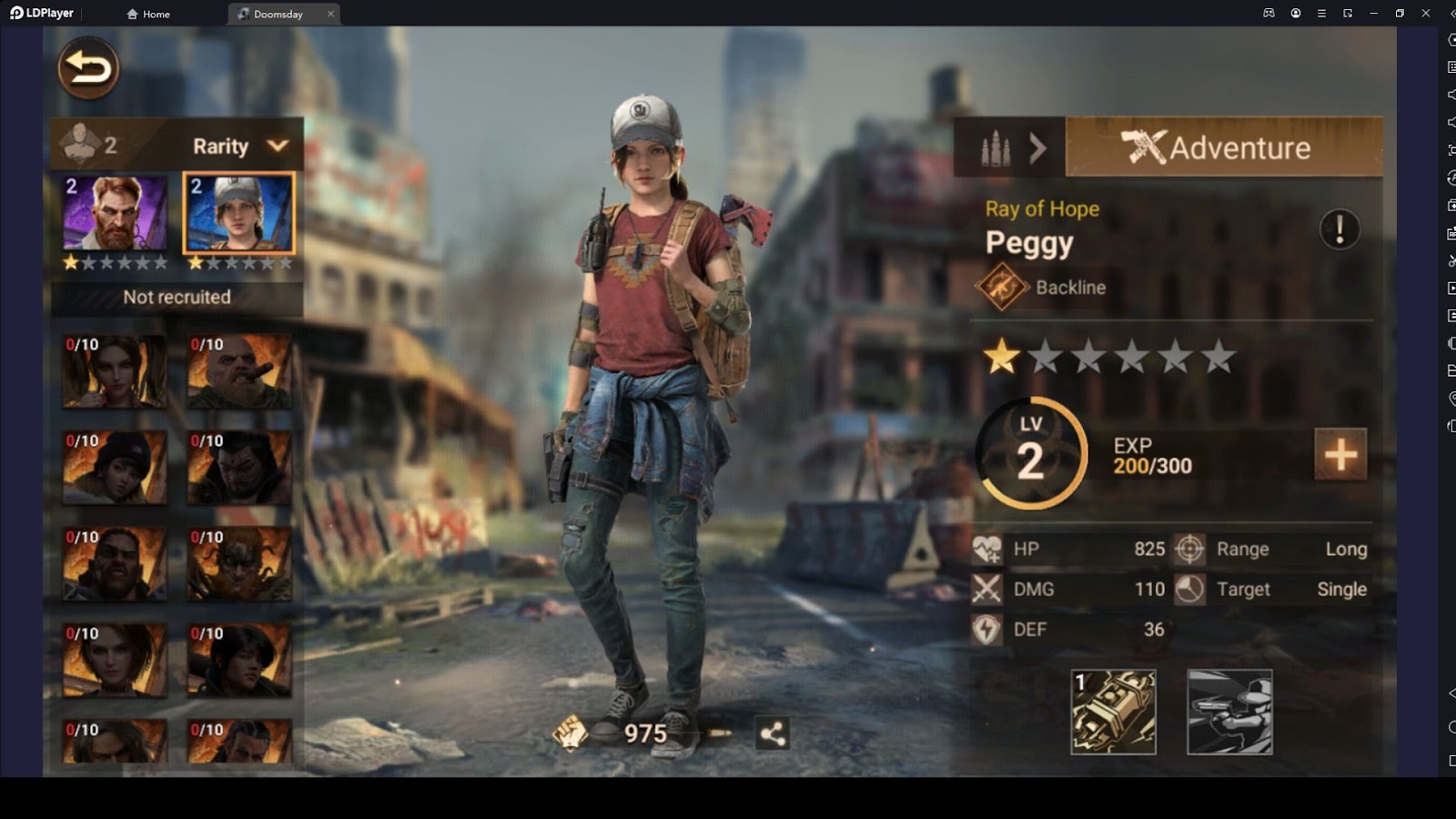 Based on the performance of each hero, we can rank the best heroes from your tier list into three ranks. 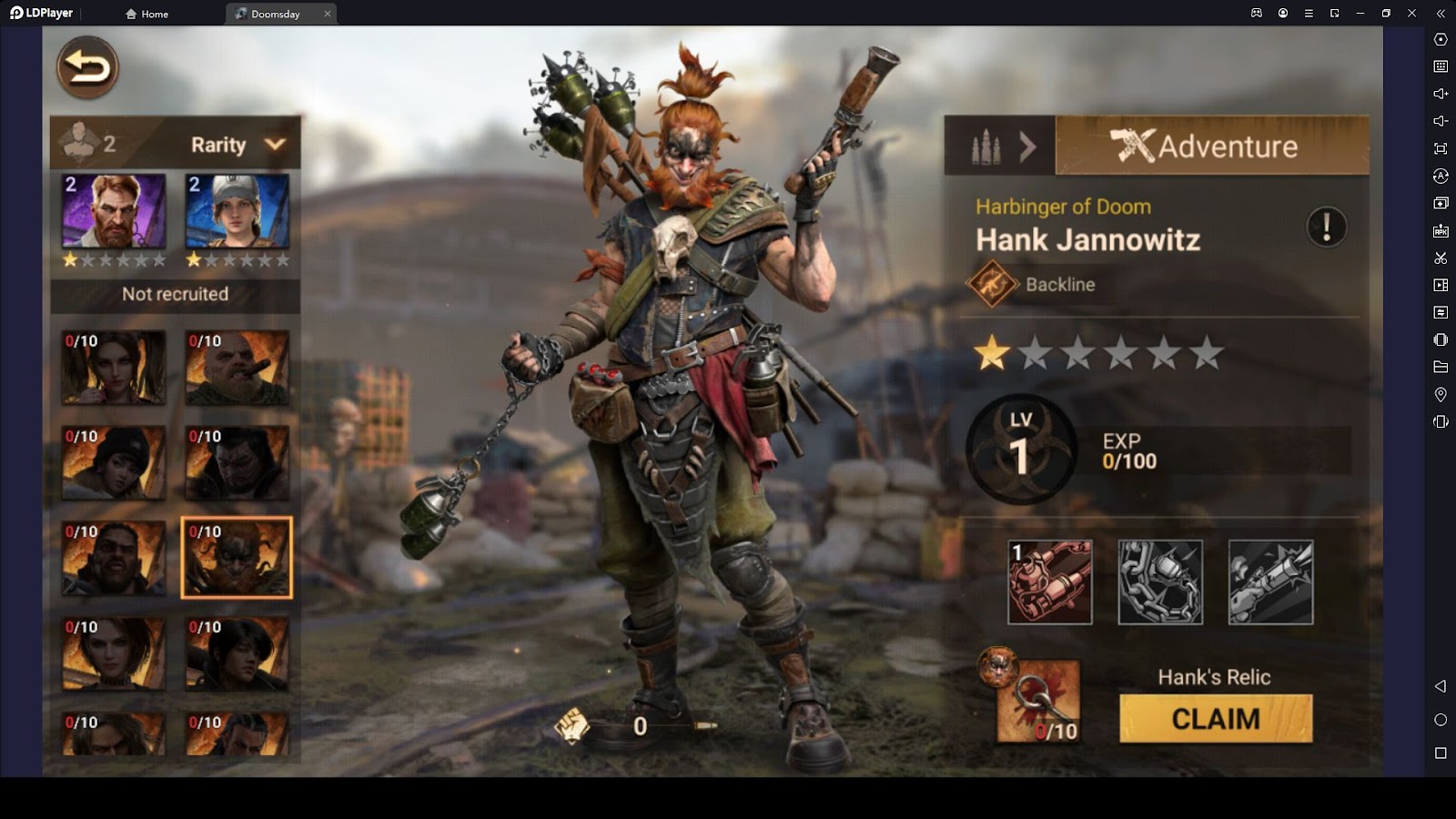 We will begin our  Doomsday: Last Survivors tier list with Hank. He will be a damage dealer to the game, and he is packed with grenades as well as flamethrowers. You, as a player, can use this role to fulfill a berserker role in the game, and he can do damage against enemies easily with his skill. Hank is not a hero who blindly relies on his active skills because he does more to the game. He can help his team by chasing enemy movements away, and Hank will also be one of the greatest DPS heroes.

Using Hank means you have less chance to lose the damage sources with you, and this hero is more like an all-rounder for your team. There is no limit when he uses his capabilities; it is just a route to victory. 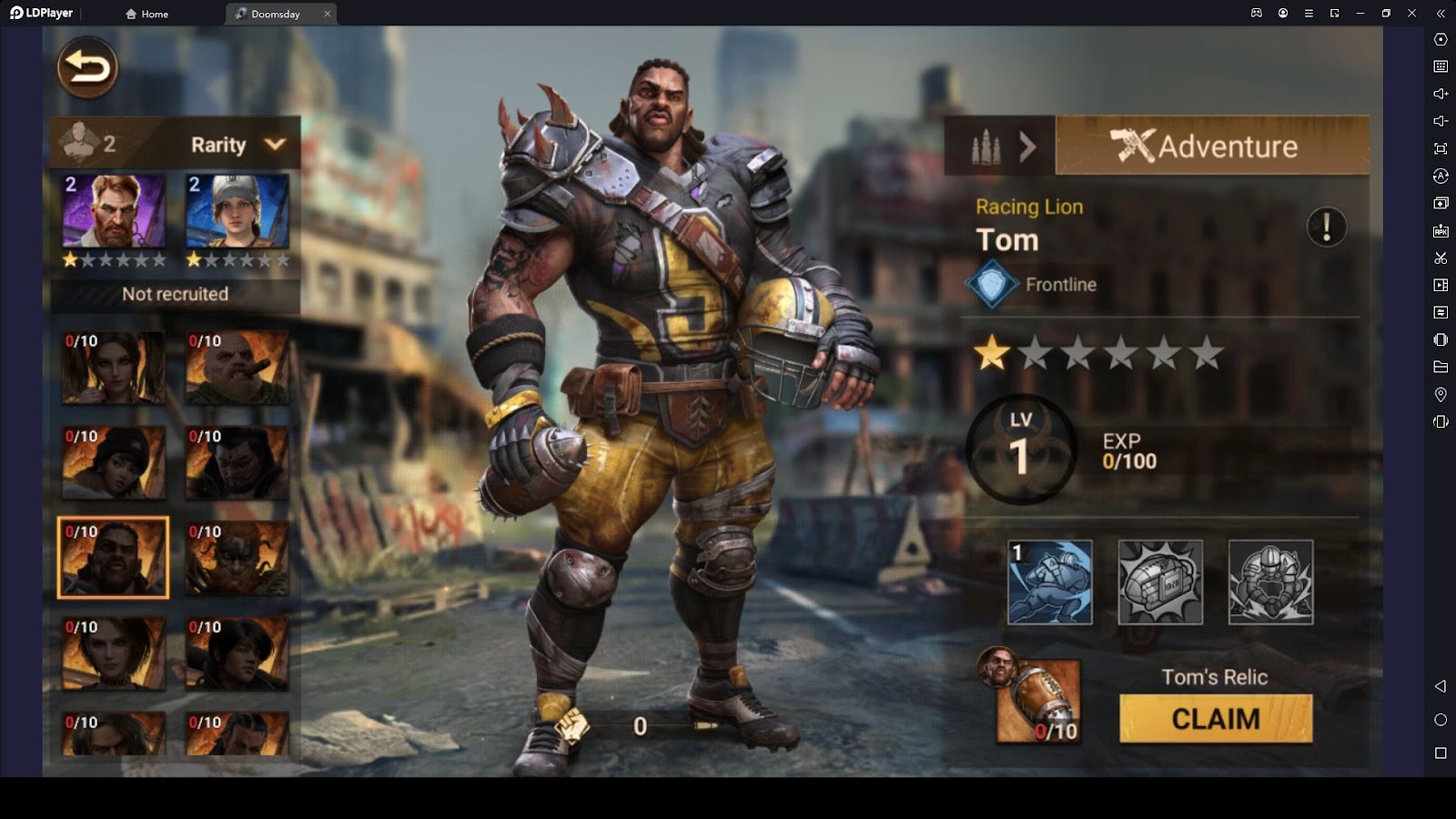 Tom is a hero who is considered to be an all-rounder from the  Doomsday: Last Survivors tier list, and he can handle a huge amount of damage in the game. It means that Tom is more like a tank to the characters. No enemy can kill this amazing hero once because he has high survivability in the game, and you just have to unlock Tom with all his abilities. It means that you are reaching for a state where you have more capabilities to chase away the zombies.

Tom is great for doing the AOE damage and can chase away all the enemies from the team. So it will be very helpful when so many enemies come from several directions, and he is just the greatest unit who can protect his team. 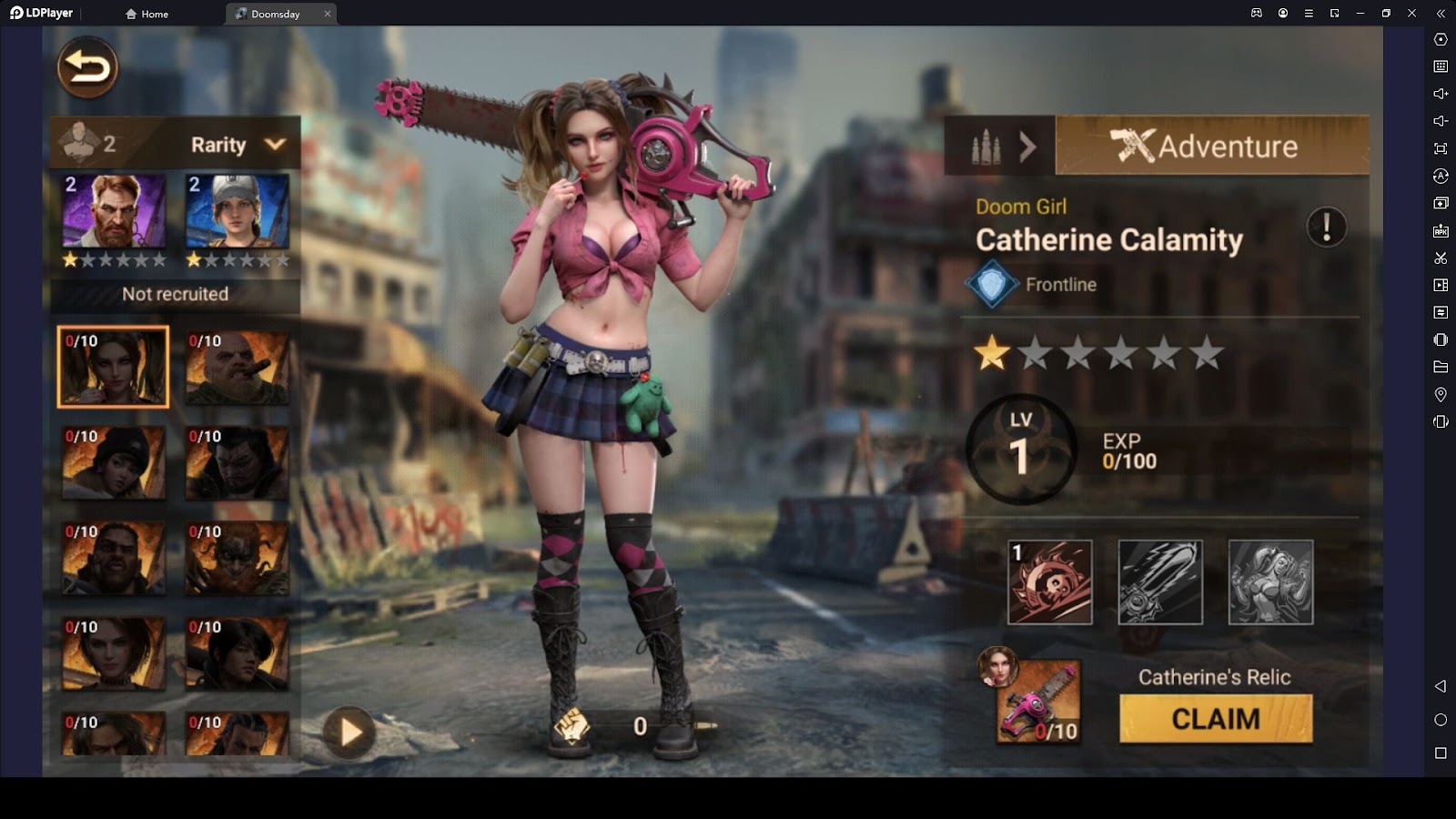 Catherine is an SSR hero, and she holds the most power as a damage dealer. Her ability to chase away zombies by using one-shot is insane, and the blades she uses are also making her more powerful. Catherine should be your ideal hero if you want to remove the zombies from your area quickly.

Catherine is a hero who needs her active skills to become more powerful, which makes her a bit framed into some limits. But it is worth mentioning that Catherine comes with the most amazing active abilities with a chance to balance the entire team. 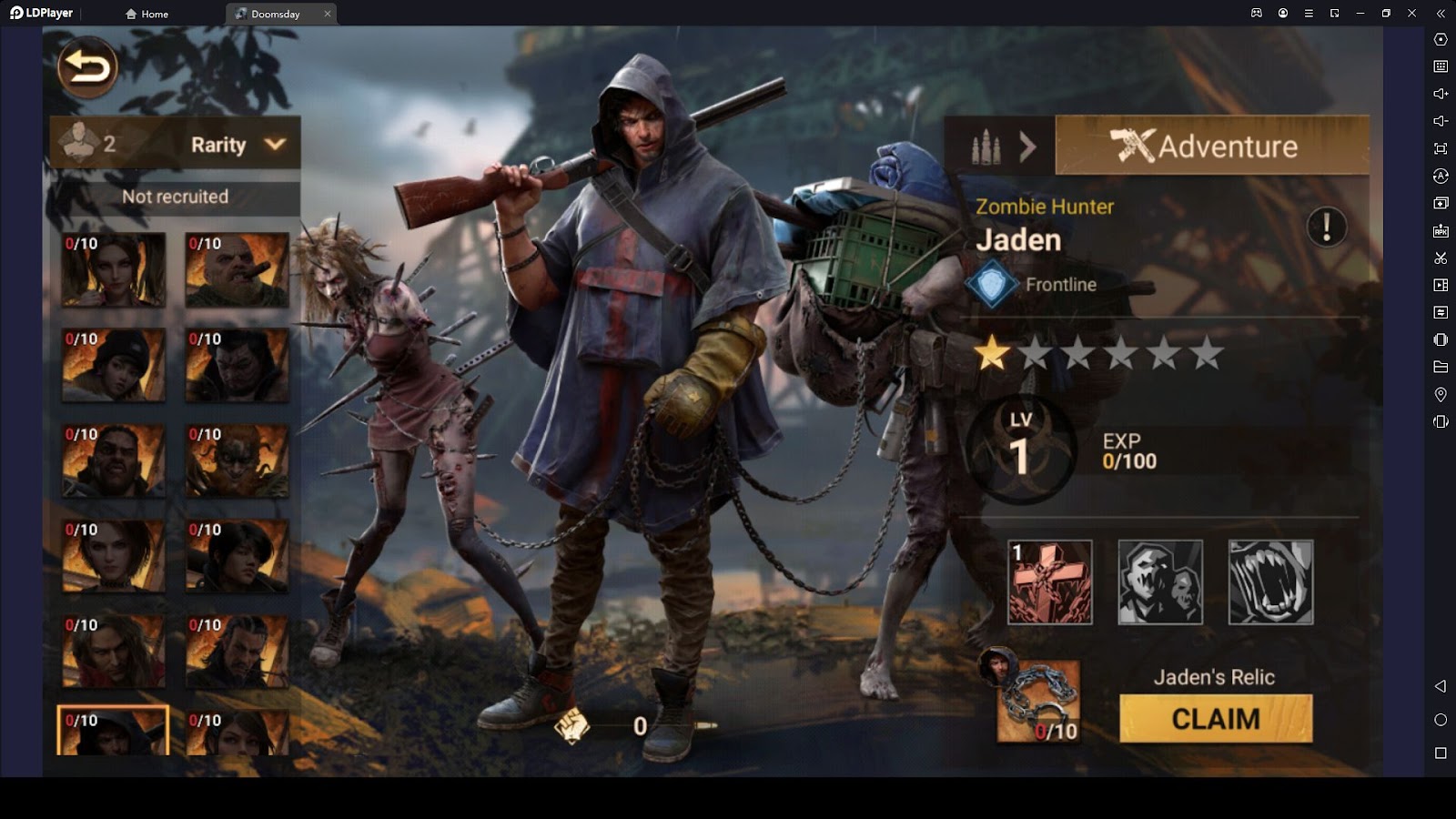 Jaden is a damage dealer from the frontline, and he can keep all the enemies away. This hero can call so many allies to the frontline and then have structure to make it more powerful. Just like Tom, Jaden is also the greatest damage dealer to the game, and he is doing all good within his role in advance. So, if you want to protect yourself from enemies, use Jaden as the key.

The only downside we can see from Jaden is that he is relying too much on his active abilities. But still, there is not anything bad to mention with him either. Jaden is going to be useful for you in advance for a team. 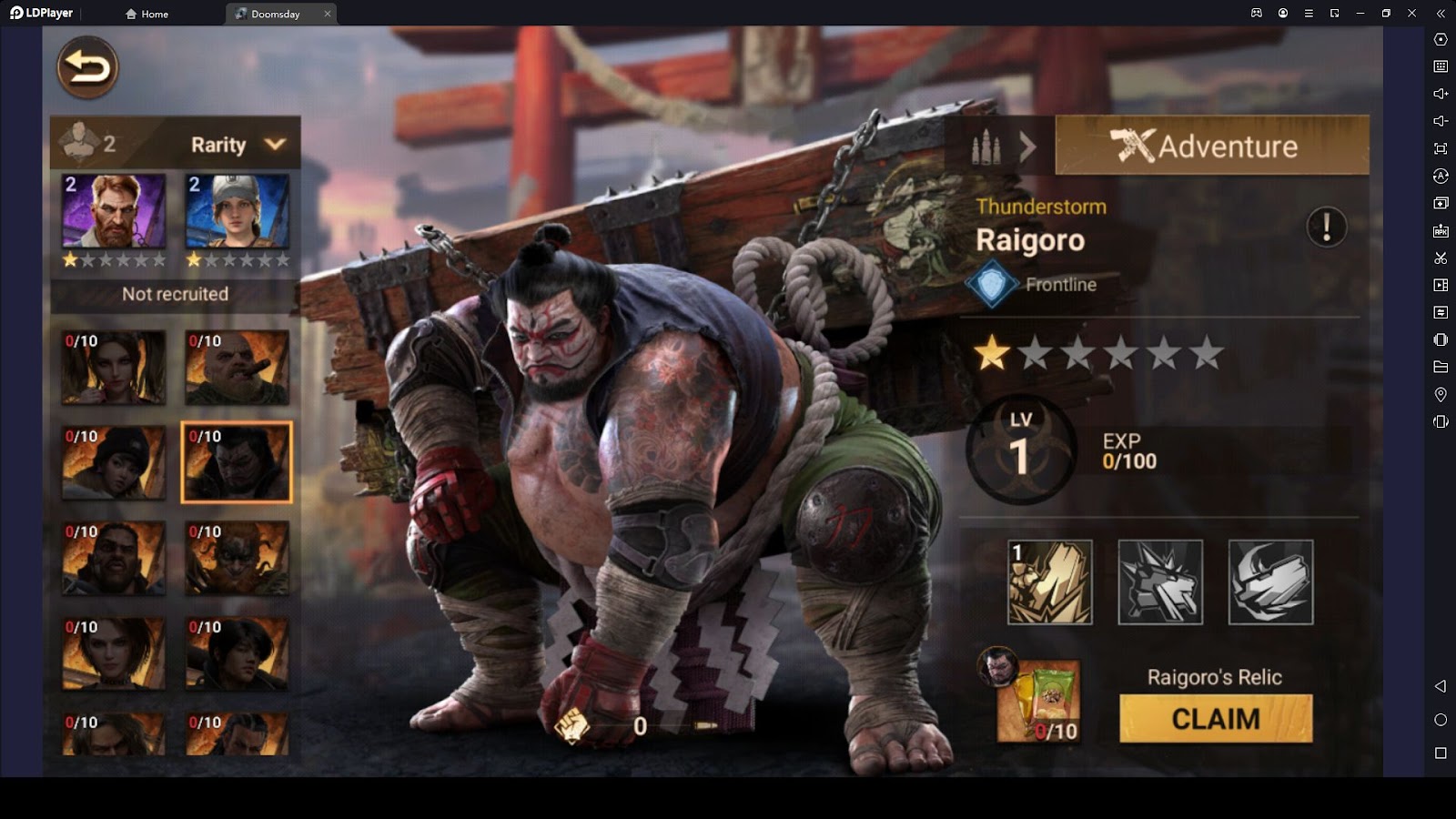 Here is another tank for you from  Doomsday: Last Survivors tier list, and he can defend the team easily. Raigoro is a useful hero who can take the damage, and since he is an average hero, he is really worthy of his state. But you cannot expect any offensive skill with Raigoro; he is only a defender. So adding him can give your team more stability in dealing with damage.

Martin is going to be our last hero on this list, and he is a healer. Since we don’t have any healer on this list to fulfill our need for that, Martin will be extremely useful to make your team more balanced. Martin is not just a hero that can support you, but also he can damage the zombies with a spike trap. 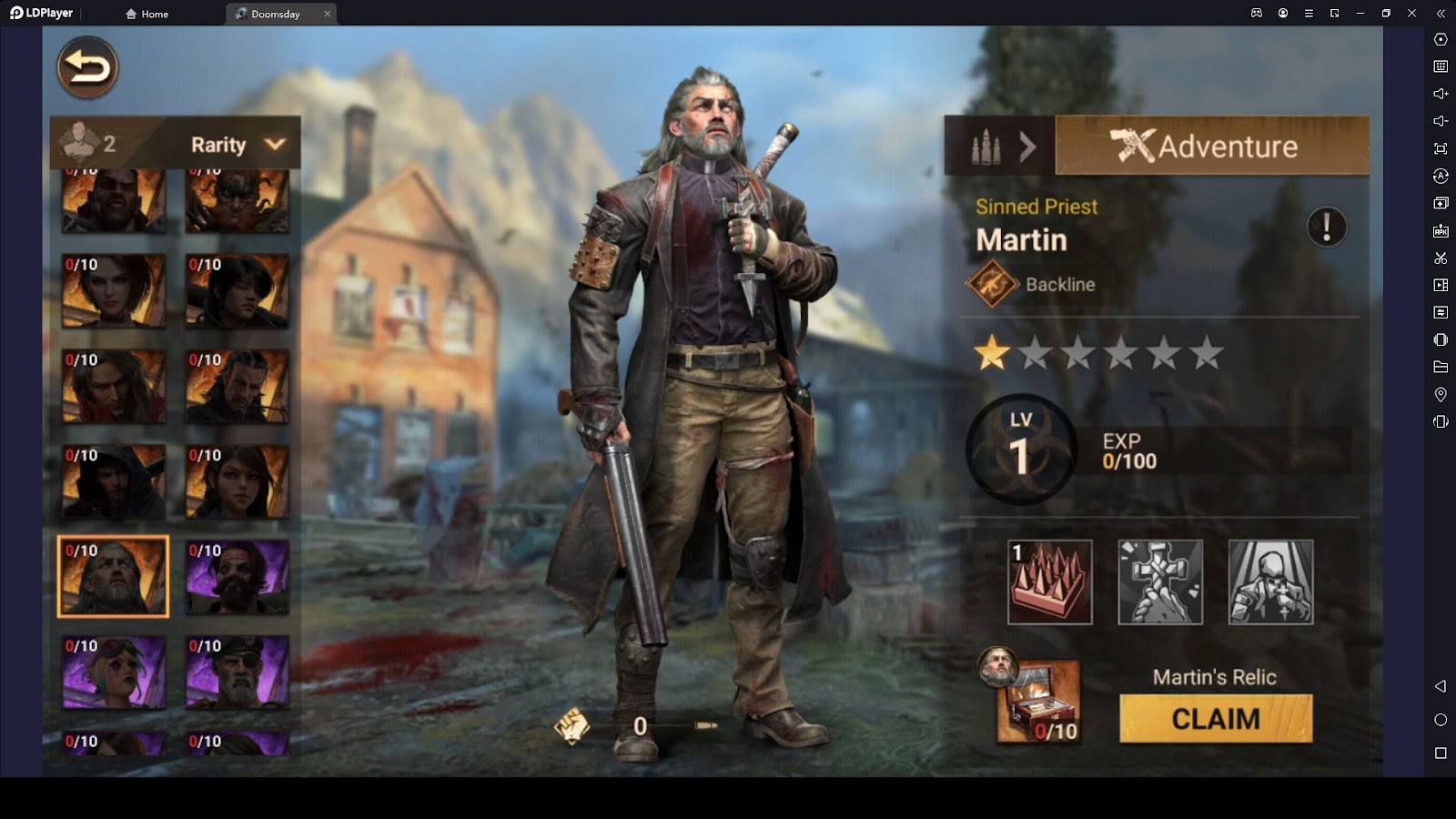 Since many of the structures in this game can attract the aggro of enemies, this unique feature of Martin will be very useful for the players because his structure cannot be down even if so many zombies are available.

Do the Most with your Heroes by LDPlayer 9

Doomsday: Last Survivors is a game with a lot of real-time strategies in there, so it means that all your Doomsday: Last Survivors tier list heroes will have a lot of things to do in the game. There are many tasks here, like training, building new buildings, and attacking. It means that these all have to be performed as a loop every day. So you are going to do them repeatedly in the game with so much effort. 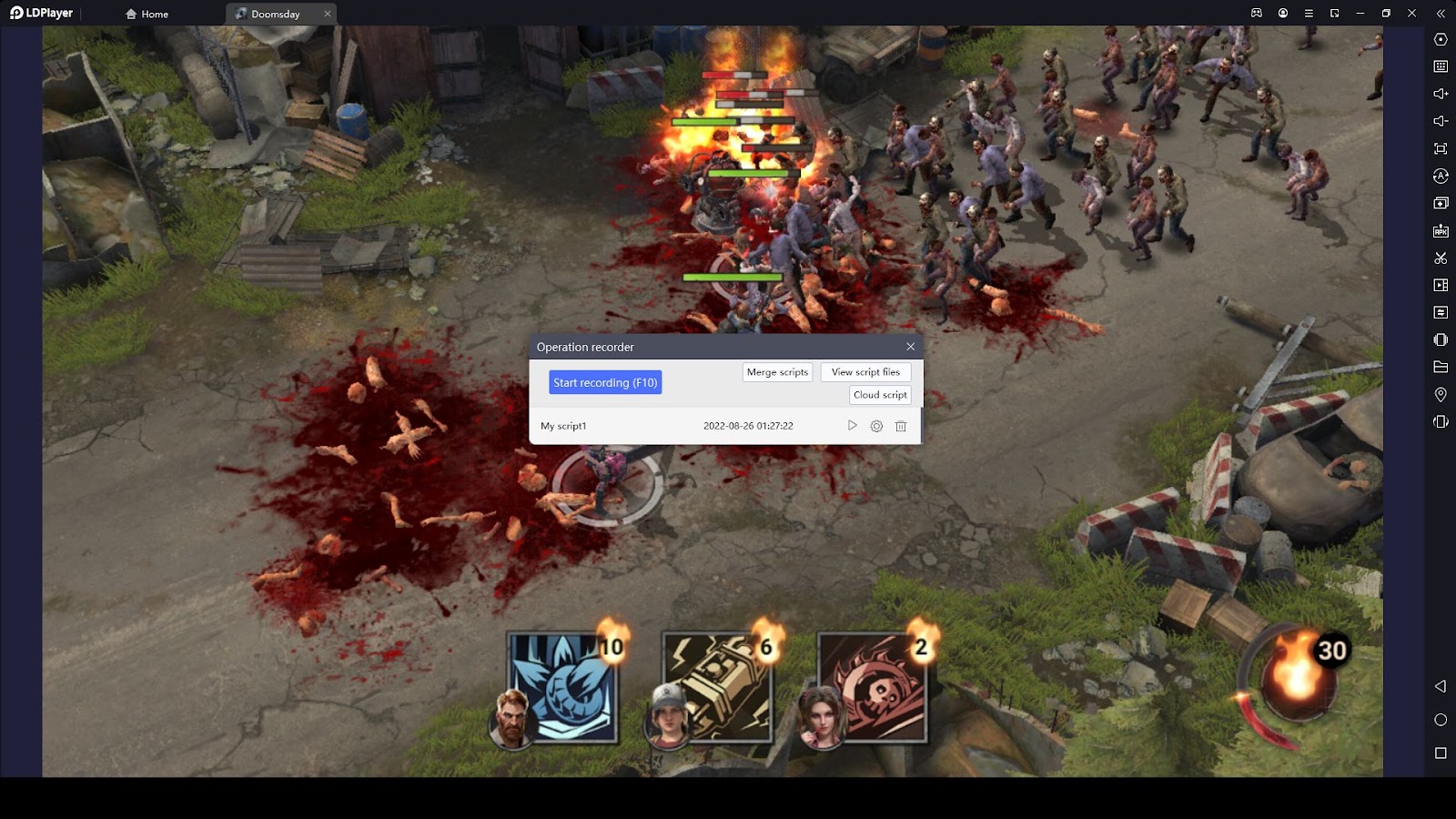 But you don’t have to stick with repeating actions; instead, you can record these all steps for once and make them happen in a loop in a set time. So you are going to have a maximum gameplay experience while the necessary works are happening as a replay in a loop. The best android emulator: LDPlayer 9 with Operation Recorder, is helping you here.

You can first record an instance by yourself. This may be training or whatever repeatable action. Then set it as a loop to be performed with a given number, and then you are free to have the best of your farming mechanics to have more advantages in the game.

So this is the end of our Doomsday: Last Survivors tier list of heroes and note that these all are the best heroes from each category. It means that the heroes we mentioned here will be useful many times in your gaming, and this is how you can survive better in your zombie survival game. 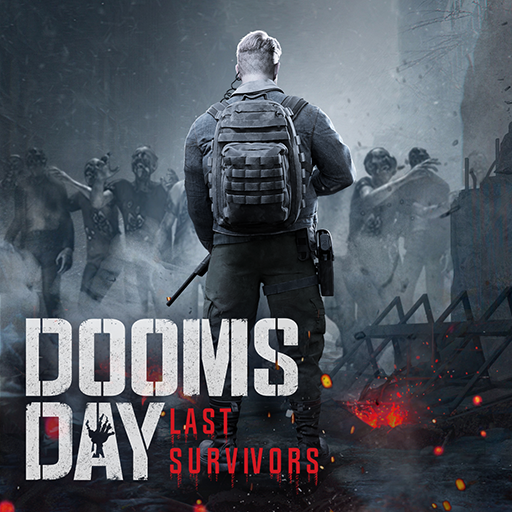 Doomsday: Last Survivors Best Tips and Strategies to the Survival

Doomsday: Last Survivors Beginner Guide and Everything You Need to Know