Here comes the mobile legend bang bang. This is a mobile game for the multiplayer playing style, and it is known to be an online battle arena game by Moonton. This game has massive popularity in Southeast Asia and has already earned a first medal event on 2019 Southeast Asian esports completion held in the Philippines. You can now play Bang bang on your PC with easy steps by LDPlayer and enjoy the fantastic features of this game at its max. You can download this Mobile Legends: Bang Bang on your PC to enjoy the excitement of him with great gameplay.

You can enjoy the genres of RPG and a multiplayer online battle arena with this game and enjoy this game on two various platforms like iOS and Android. It gives the players chances to enjoy the latest 5v5 MOBA showdown, and it will happen against a real man as an opponent. You have to select the ideal player for you and build a powerful team with comrades. There will be 10 minutes of battle and 10 seconds lasting fighting in this game.

In Mobile Legends: Bang Bang, the producers of the game has decided to add a new hero called Paquito, and he has been a massive attraction to the gameplay already. Today's guide is dedicated to our new Bang Bang hero Paquito with a guide for his gameplay.

Paquito is the newest hero in the mobile legends Bang Bang. He is more known as a fighter hero, and there was already a hint for his coming to the gameplay in November 2020. It was announced when this MOBA game had a partnership with Manny Paquito, a boxing legend. Paquito's general cost is up to 32 thousand battle points. And this hero will cost a continuous 599 diamonds on his regular play. But you have to know that Paquito can be obtained at some discount r with 419 diamonds.

Passive skills and the Skill Set of Paquito

There are multiple skills of passive and a set of skills available for the Paquito, and those are helpful for him to engage in team fights. Those will help the players to win those fights. So here is the passive skill of Paquito.

Champ stance is the passive skill of the hero Paquito. This fighter hero can build some stacks, and he builds them on the occasions where he hit enemies. Hitting enemies will be done using a simple basic attack or by using skills to deal damage. When this hero's stack has reached the number 4, he will enter into the champ stance. So this champ's stance is something that helps Paquito to build on his following skills.

When Paquito is in his champ stance phase, he will not have any cooldowns within him, and his overall skills are not going to have any cooldowns. So literally, he can spam on to them for over a few seconds in this phase. When this fighter hero has his champ stance with him, all of his basic attacks are only dealing with 85% or up physical attacks for the gameplay. That means that Paquito is somewhat failing in his basic attack skills. When this hero is entering into the stance phase, you have to maintain spam on him as a player, and it will help you deal with more significant damages to the enemies.

When this hero has used some of his enhancing skills, he can increase his total speed for the movements by 60% on average. But know that this amount is going to decrease in 2.5 seconds. Although champ stance is a more excellent passive skill, you should know that it can reduce your overall basic attacks as Paquito. So your main task is to organize some basic strategies to use with him in his fights.

The fighter hero's first skill is this heavy left punch, and you can use this continuously to deal with damage on the gameplay. Paquito can punch towards a specific direction, and it can deal 245 physical damages to the enemies. If some of the heroes getting hit by this skill, you should know that Paquito can gain a shield that gives him outstanding durability.

When your champ stance is activated with the heavy left punch skill, you will reach increasing damage elated to physical with this hero. This hero is gaining a 110% original shield, and it can be stacked with non-enhanced protection. It will last for about 2.5 seconds and give you strong durability against the enemies.

The second skill of Paquito is the Jab, and it goes with damage or a blink skill types. His hero is going to have physical damage for his enemies by dash forwarding and throwing a jab. Jab will deal with a 250 and going to affect all enemies badly in the current area. If your target is in your path, the skill jab will not do any of the damages to them.

And you have to know that this Jab will stop when it hit the enemy hero or a creep. This jab skill can pass through the minions. So you have to keep it in your mind importantly.

This skill is the ultimate skill of your Paquito hero, and it is going to be your primary damage dealer. This hero can perform an elbow strike towards his enemies that are faced towards him directly. This attack will score 250 physical damage, and it keeps pushing the enemies towards a specific area. After this attack, he can swing a haymaker, and it will score as 400 physical damage with a more incredible speed. 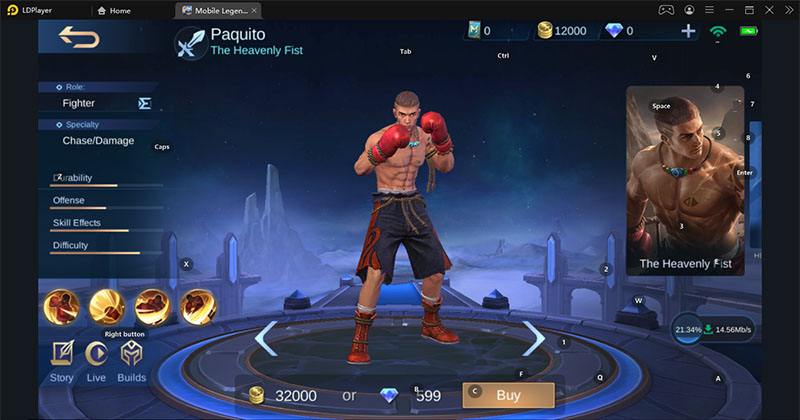 Paquito can dart towards the back, and it makes some unique attitude towards him. And also, he is doing this backward action right after the use of a haymaker.

You can see that Paquito is not a more complex hero, and it is not difficult to get used to him at all. Mastering this fighter hero is relatively easy, and you can confirm it to yourself by looking at his passive skill and the other set of skills. But you should know that still there are some strategies to learn with him. There are learning curves available for this fighter hero, and you have to perform those use this hero for your gameplay.

You have to take the proper knowledge of using all the skills and the passive skill to have success on Paquito gameplay in Mobile Legends: Bang Bang. By knowing how his skills are working, you are gaining proper knowledge for utilizing this hero in the fights.

Paquito is more likely a hero to moderate with some difficulties to use. As a player, you have to practice him with the use of custom mode o with an AI. So it will help you catch up on how Paquito's skills and passive skills are working towards the team fights. Selecting this hero is beneficial for you because he is earning you some more benefits with his skills. He is easier to manage and easy to practice.

So it is time for you to start your gameplay with Mobile Legends: Bang Bang hero Paquito and every second you spend with him during fights will no longer be a disappointment.