Touhou LostWord is a bran-new role-playing game, and we all know what role-playing games are all about. So, instead of going into details, let’s talk about the gacha system and what this game brings to the table, which makes it stand out. 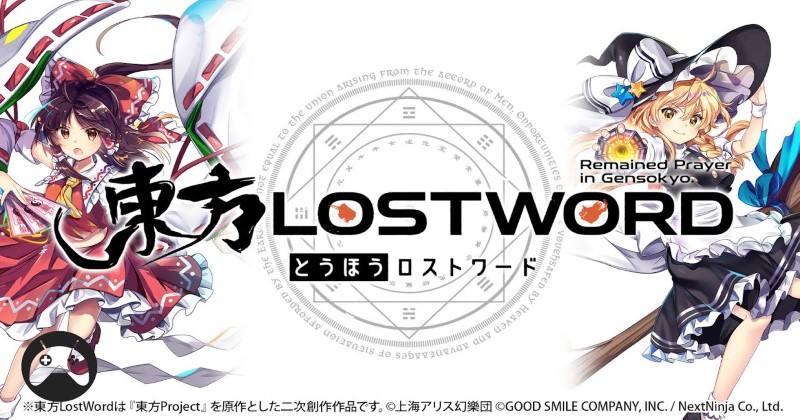 Today, we have brought you a comprehensive character tier list May 2021 update. Below you will find all the character's details and a lot of info about them, including their stats. All of this will make it easy for you to roll for a powerful character. Before we move forward, you can check out the pre-registration rewards the developers offered.

The characters have been divided into 8 different elements:

The characters further have been divided into 8 different roles:

Homing Amulet – Reimu Hakurei's Spread Shot. Her miraculous ofuda (paper talismans) home in on the target. It might seem a bit unfair to her enemies, but it goes to show how powerful a shrine maiden can be.

Persuasion Needle – Reimu Hakurei's Focus Shot. It shoots cleansing needles of faith to attack the target. This packs quite the punch even if you're not a youkai. Kogasa should be able to replace the needles with her blacksmith skills if necessary. 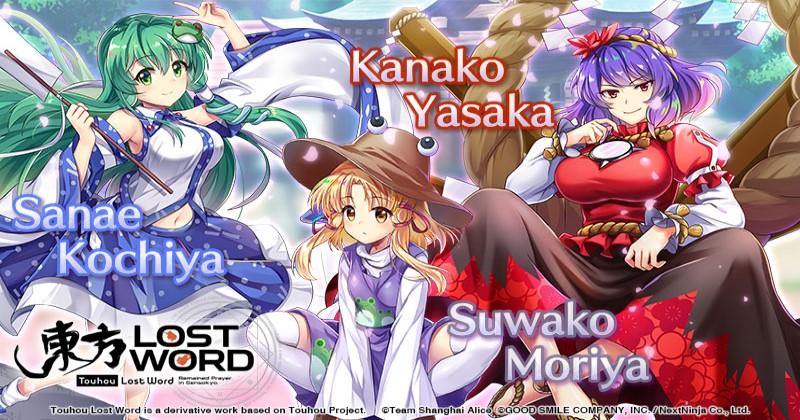 Cobalt Spread – Sanae Kochiya's Spread Shot. She shoots out frog-shaped bullets—the frogs sacrifice themselves to defeat Sanae's enemies. It is believed that Sanae borrows Suwako's power to perform this attack.

Sky Serpent – Sanae Kochiya's Focus Shot. She shoots out snake-shaped bullets—the snakes snap their jaws down on evil. It is believed that Sanae borrows Kanako's power to perform this attack.

Phonon Master – Luna Child's Spread Shot (a Touhou LW original). This soundwave attack uses phonons, which are particles of sound. It came to life after Luna read a book about particles with the same properties as sound and tried to create a shot with that image.

Satellite Cannon – Luna Child's Focus Shot (a Touhou LW original).An intense barrage of light that pours down a torrent of moonlight. The secret to this shot is that the light actually comes from the direction of the moon—not from Luna.

Plasma Duct – Sunny Milk's Spread Shot (a Touhou LW original). This attack releases a barrage of smoothly refracted light particles. Sunny Milk came up with this easy–to–use attack when she saw the light shimmering through tree leaves on a sunny day.

Sidereal Cannon – Sunny Milk's Focus Shot (a Touhou LW original). Sunny Milk shoots out a beam of sunlight in this attack. Apparently, she practiced this attack a lot with Luna Child and Star Sapphire so that she could easily use it for pranks.

Little Kitty Ears – Chen's Spread Shot (a Touhou LW original). She shoots out bullets in a triangular pattern—just like cat ears. Ran told her to train to create a simple shot, so Chen worked hard to come up with this shot on her own. She really did her best.

Lucky Cat Paw – Chen's Focus Shot (a Touhou LW original). Black cats are often said to be unlucky, but they are actually considered to be omens of good fortune in some parts of the world. It is unclear what kind of luck Chen's paw might bring, but in any case, it is useful when having battles of bullets with fairies. 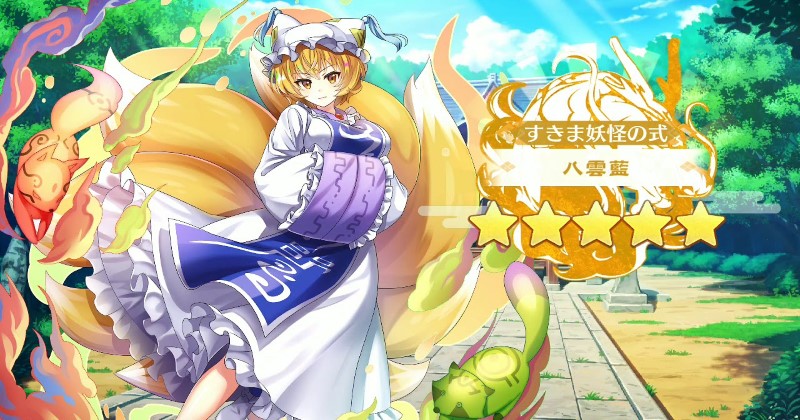 Tail Spinner– Ran Yakumo's Spread Shot (a Touhou LW original). After Yukari upgraded Ran, she gained the ability to use this attack which shoots out needles while rotating at high speed. It looks like a pompom of yarn and is a secret favorite of Yukari's.

Sky Dragon Ascension– Ran Yakumo's Focus Shot (a Touhou LW original). This shot is based on Ran's Sly Youkai Laser. Yukari came up with the name with inspiration from a lengthy book.

Deadly Butterfly– Yuyuko Saigyouji's Spread Shot. She summons spirit butterflies to bombard her target. Butterflies are said to represent souls and be messengers from the realm of the dead, even in other countries.

Lights of the Unbron – Yuyuko Saigyouji's Focus Shot. She shoots out an intense and strangely cherry–blossom pink light. With reincarnation, souls that have not yet been born may be the closest to souls that have died and been purified.

Colorful Rain – Hong Meiling's Spread Shot. She gathers the qi circulating around her and disperses it with great force. However, it is not as powerful as it could be because Meiling is easily distracted.

Fragrant Wave – Hong Meiling's Focus Shot. She draws an arch with her arms and makes the qi around her concentrate in her hands before unleashing it in a powerful wave. Meiling says her shot is instantaneous, but others say differently. 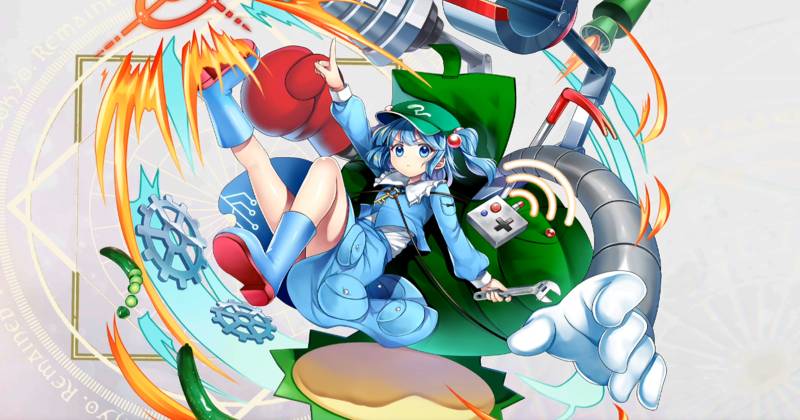 Tsuuhiken – Nitori Kawashiro's Spread Shot (a Touhou LW original). It refers to a type of fighting style that uses fists. Nitori uses an extendable mechanical arm to attack her target. There is a type of Chinese youkai called tsuuhai enkou which can extend one arm while shortening the other, and that characteristic lives in Japanese kappa. Nitori named her extendable mechanical arm after that Chinese youkai out of respect.

Aerial Torpedo – Nitori Kawashiro's Focus Shot. She sends out multiple aerial torpedoes to blast her target in this attack. Nitori is both an engineer and a kappa—an aquatic youkai—making this shot a good fit for her.

Neurotoxicity – Medicine Melancholy's Spread Shot (a Touhou LW original). Medicine created the shot using knowledge from Eirin. While Medicine is not so naive as to hate every human she sees anymore, if her target is human, she might put a little more poison than usual into her shots.

Black Bile – Medicine Melancholy's Focus Shot (a Touhou LW original). An excess of black bile is said to cause melancholy, and this bullet hell attack shoots it out liberally in sprays of magic poison. Medicine learned this from Eirin as well. 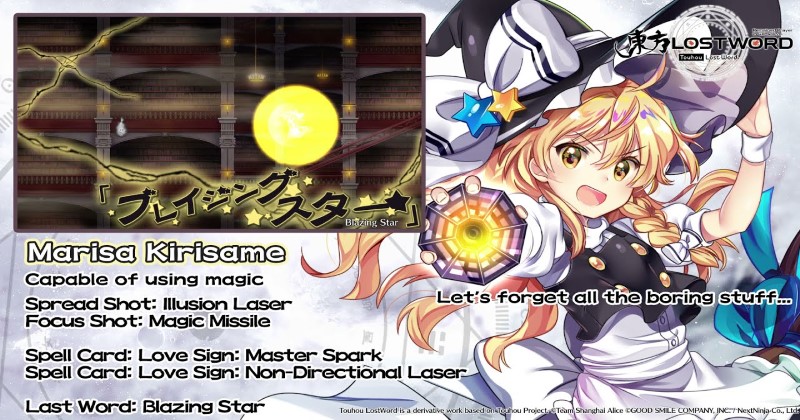 Illusion Laser – Marisa Kirisame's Spread Shot. Fantastical lasers shoot out in straight lines. Normally, lasers are made with science, but how on earth does Marisa make hers?

Magic Missile – Marisa Kirisame's Focus Shot. These magic missiles are famous and popular among magic users. Marisa came up with the idea herself and made them with her own original magic.

Spectrum Mystery – Alice Margatroid's Spread Shot. She shoots out a barrage of red-light bullets. Some say it is similar to Marisa's missiles—perhaps they have been exchanging ideas.

Shanghai Doll – Alice Margatroid's Focus Shot. Alice's Shanghai Doll is one of her favorites and is top class, showing up with Alice often. The doll looks very cute, but the lasers she shoots out are incredibly powerful. 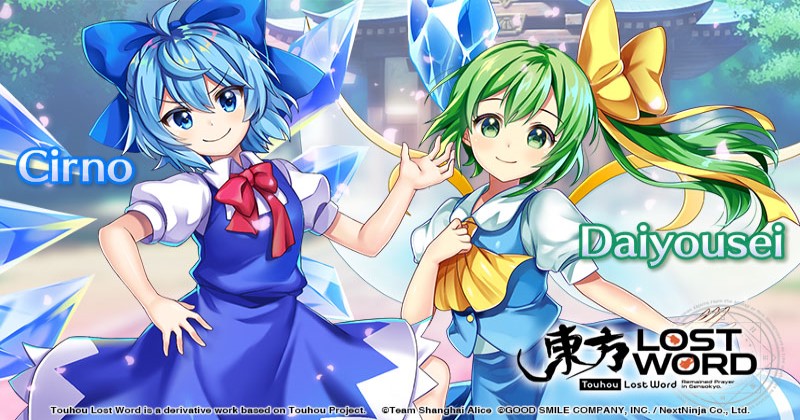 Time Passionflower – Daiyousei's Spread Shot (a Touhou LW original). This attack shoots out bullets like the hands of a clock. Daiyousei based this barrage of bullets off a plant she saw and was practicing using it when the Flower Master passed by and gave the attack its name.

Fairy Ball – Daiyousei's Focus Shot (a Touhou LW original). She shoots out balls of fire in this bullet hell attack. Apparently, she created this attack during a practice in the bamboo forest after Mokou suggested that she try using fire. Daiyousei came up with the name of the attack herself, but it was pretty difficult for her. 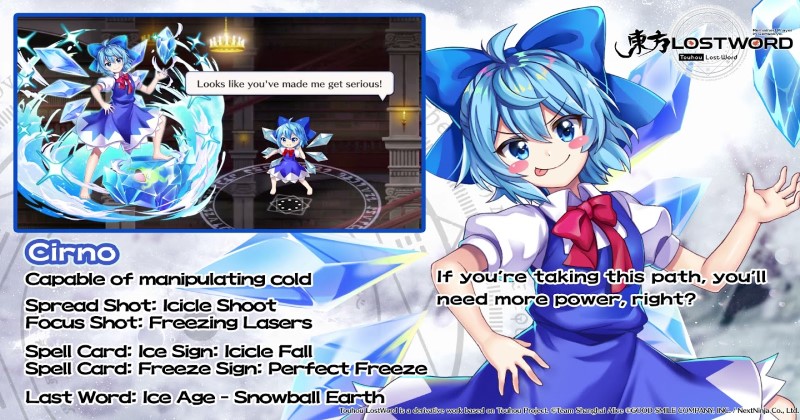 Icicle Shoot – Cirno's Spread Shot. Her bullets shoot out icicles. Don't underestimate the attack just because the bullets are made of ice. The frozen water is as hard as metal.

Freezing Lasers – Cirno's Focus Shot. It freezes anything it touches, so you definitely don't want it to hit you. It is unclear how the freezing laser works and what temperature the laser is. Knowing Cirno, it could be –100,000,000 degrees.

Lunatic Gun – Reisen Udongein Inaba's Spread Shot. The attack shoots out multiple rounds of bullets. The word lunatic originally referred to madness dependent on the changes of the moon, so Lunatic Gun is both a gun of the moon and a gun of madness. Apparently, Seiran also uses the same type of gun, so it might be a common gun on the moon.

Illusionary Blast – Reisen Udongein Inaba's Focus Shot. Reisen's dangerous eyes shoot out monstrous laser beams. For some reason, whenever anyone shoots lasers from their eyes, the lasers are always red, whether the shooter is an alien, a mutant, or something else altogether. 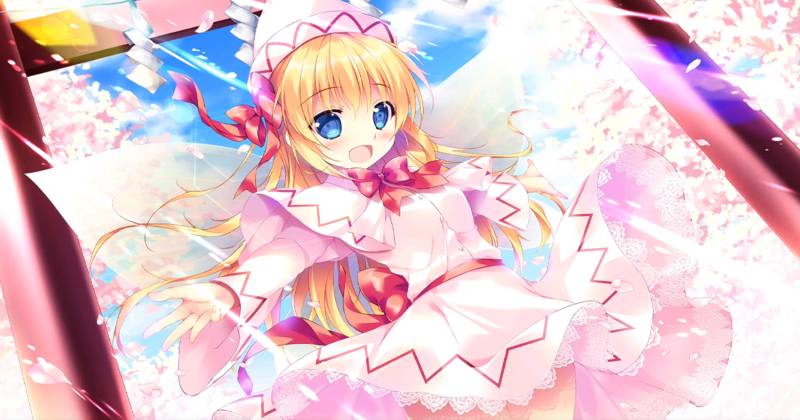 Hina Arare – Lily White's Spread Shot (a Touhou LW original). Hina arare are colorful bite-sized rice crackers made for a spring festival. This bullet-hell attack was born after Lily fell and sent some of these rice crackers flying. The Child of Miare gave her the snack and also taught her the snack's name, but the name is too complicated for Lily White to read.

Petal Blizzard – Lily White's Focus Shot (a Touhou LW original). Lily had been playing with some petals when she thought of this bullet hell attack. She named it after a phrase she heard Youmu say, but the words are a bit difficult for her.

Sword Aura – Youmu Konpaku's Spread Shot. She lets her sword aura fly at her target in this bullet hell attack. Sword aura refers to the spirit a sword wielder lets out, but Youmu actually uses that aura itself to attack.

Lotus Posture Slash – Youmu Konpaku's Focus Shot. This bullet-hell attack features her two swords swinging down in a cross, glinting as they hit their target. The distinctive name comes from a Buddhist term, as do the names of some of Youmu's other attacks.

Every Angle Shot – Patchouli Knowledge's Spread Shot. She sends out a barrage of bullets in five different elements. It's perfect for Patchouli, who is a magician skilled in handling multiple elements.

Five Seasons – Patchouli Knowledge's Focus Shot. Her bullet hell attack commands five different elements. It's called Five Seasons because it uses the elements of the four seasons—wood, fire, metal, and water—plus earth in a circular arrangement of bullets, which she launches with skill and grace. 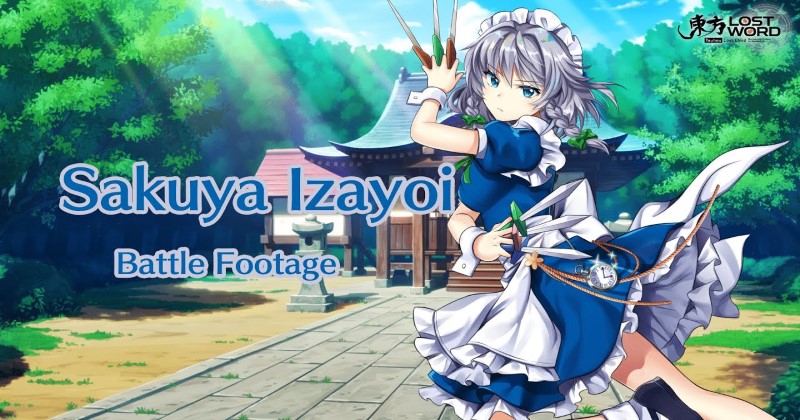 Bewitched Sword: Silver Blade – Sakuya Izayoi's Spread Shot. This bullet-hell attack uses a silver blade that Sakuya received during a past incident. Its properties as a bewitched weapon have gradually faded after the incident was resolved, but it appears to be reproducing its properties in some way. Perhaps Patchouli is casting magic to help it. It was originally a prototype made by Shinmyoumaru.