Star Wars™: Galaxy of Heroes is a free role-playing game developed by Capital Games and EA Mobile. The game was officially launched for both Android and iOS devices in November 2015. As the name suggests, the game contains various characters from the Star Wars expanded universe. The game offers several heroes to choose from. And with us here, you don't have to do the stressful work of finding which characters are best. Here in this article, we have listed the ten best heroes and ten best teams.

You need to form a strong team at the start of the game to progress further quickly and efficiently. With a strong team, you can defeat your enemies easily. The list that we have prepared contains strong heroes and teams that are better than other characters in one way or another. Go through this list to form a formidable team. After heroes, don't forget to check out the game's best teams.

The first entry in the list should not be surprising. Without a doubt, Luke Skywalker is one of the strongest attackers in the whole game. Talking about stats, he has some of the highest points in the game, and it is certainly difficult to counter against him. You can pair Luke Skywalker with Yoda to make him even more powerful.

Darth Vader, the dark Lord, is another powerful hero. His attack Ruthless Slaughter can't be taken for granted. A character such as Darth Vader, whose skill can be used three times in a row, you are sure to destroy your opponents. 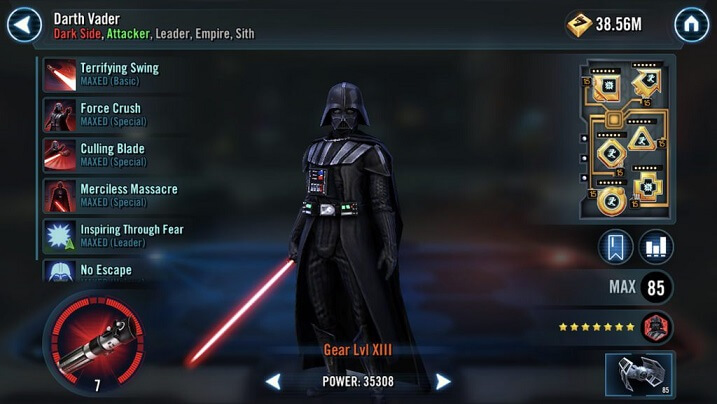 Grand Admiral Thrawn is an incredibly powerful character. He is capable of inflicting serious damage to the opponents. In addition to that, he can gain from his Status ability to counterattack and dissipate, making your overall team more strong for the next battle.

Darth Malak is another powerful character. But this character is extremely difficult to unlock, and at the same time, like Tank, it is irreplaceable. The main feature of this character is that the more its health drops, the more resistant and resilient it becomes, not to mention that its dark fusion buff is one of the few that cannot be removed in any way. 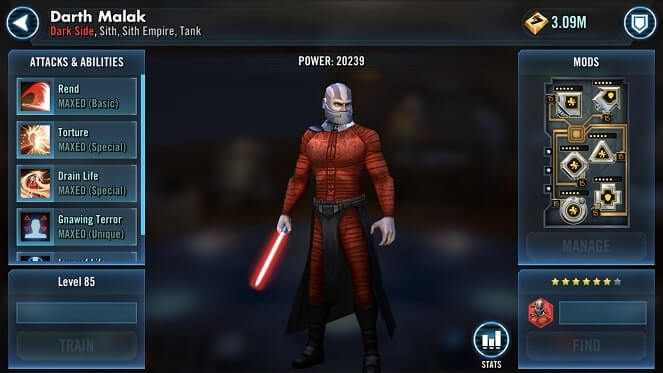 He is strong, versatile, and above all, he has skills that can eliminate any opponent. Use Direct Focus and Fast Charge together, and the enemies on the dark side won't stand a chance to defend themselves. Moreover, stuns do not work on him, nor do skill blocks or taunts. With him on the team, you allow his Jedi partner to recover 100% health per fight. It is safe to say he is the most amazing and powerful character. 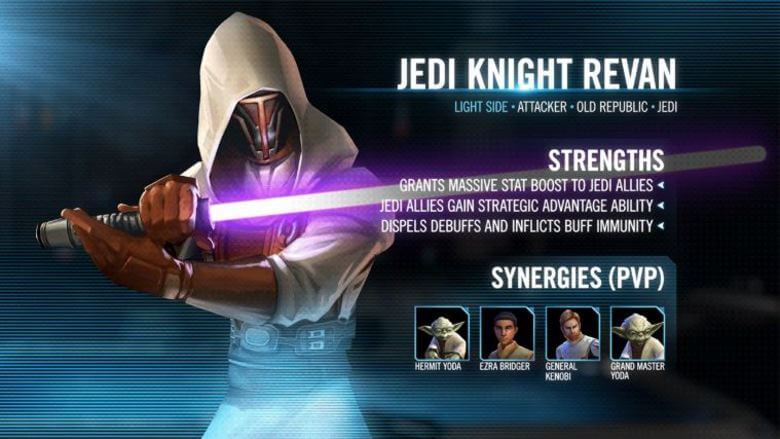 Dark version of Revan, the flexible characteristic of Revan. It can heal itself without any support when its life points exceed 50%. He also has a very powerful Lacerate ability. This character also has a +100% defense penetration. Its attack, Force Storm, deal special damage to the target enemy. 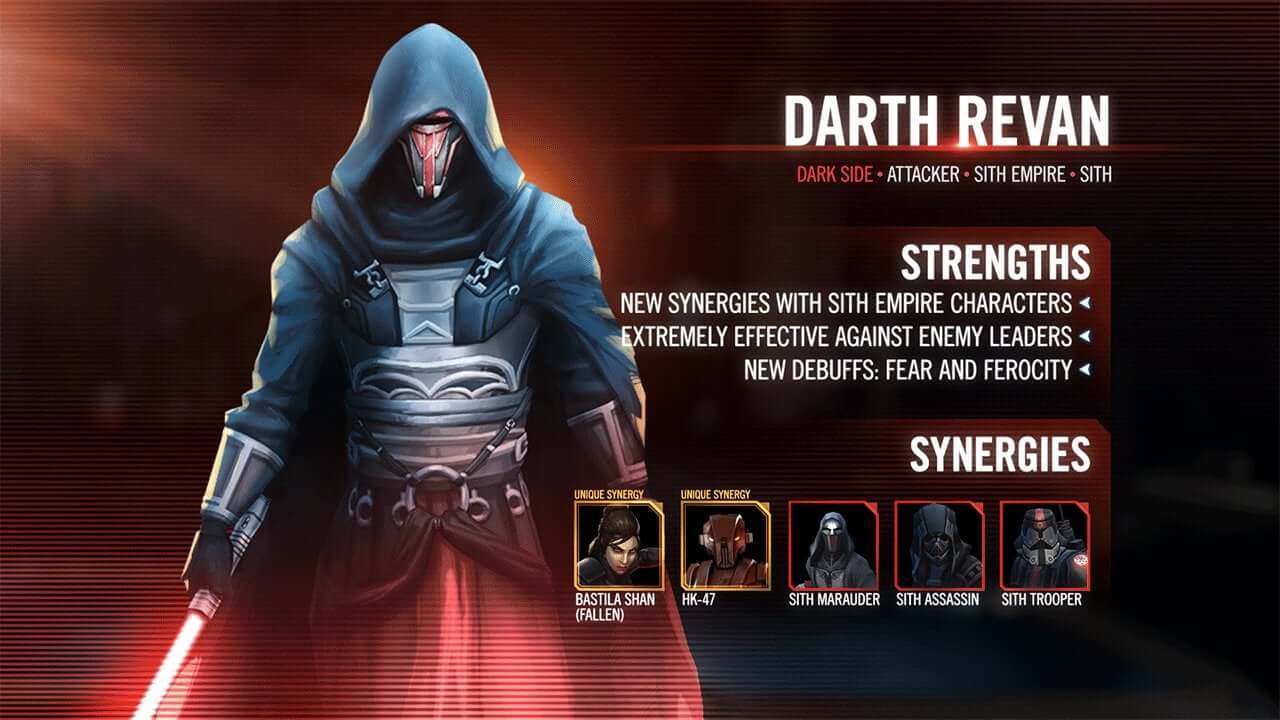 An ideal character for a First-order team. Using his Ultimate Ability, he can disperse all types of de-buffs from itself to cause certain damage to the opponents. Kylo Ren can't be incited and staggered, does not suffer damage while using charge, and doesn't resuscitate the rivals he dispenses with. 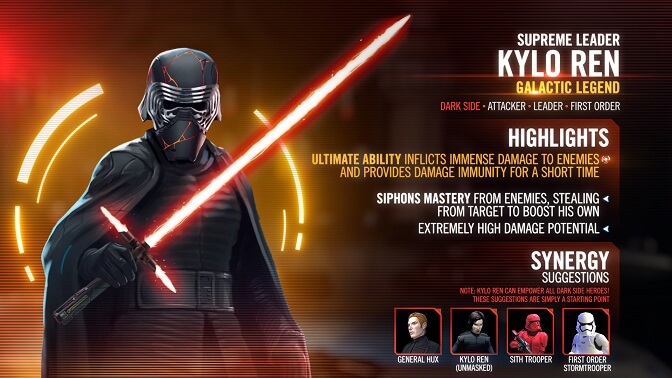 Even though this character is not easy to level up, Rey is one of the strongest fighters. With the ultimate charge, she can inflict serious harm on the opposition she attacks, with attacks that can't be avoided or counter attacked. Using her Ultimate Charge, she can't be defeated. Her ability Relentless Advance deals physical damage to the opponents. With Galactic Legend, she is immune to stun effects. 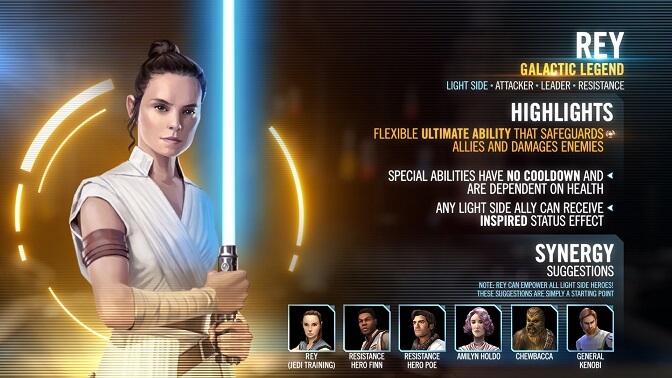 Eternal Sith Emperor, a hero impervious to incitement, capable of one-shotting character with a single ability. He has the skill of completely resurrecting himself if an allied Sith ends up dead in the fight. With Galactic Legend, he is immune to stun effects. He is also immune to taunt effects and Turn Meter reduction. 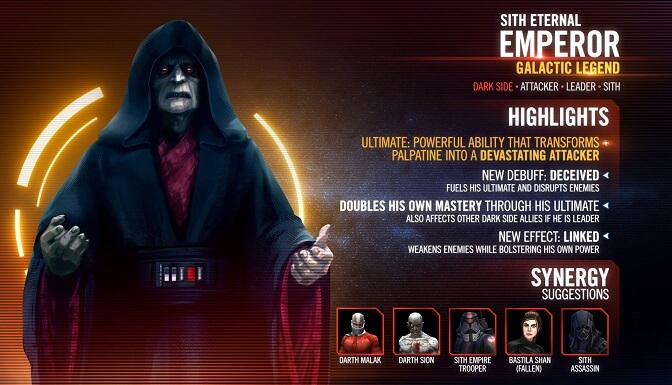 Luke Skywalker seems to be almost undoubtedly the most powerful light-side hero seen so far. If combat-ready and defensive aspects are prioritized, it becomes nearly unbeatable. His abilities allow the Jedi to gain speed and more attack power to defeat almost any opponent. His abilities can also heal allies and slow down the enemies by attacking with massive damage. 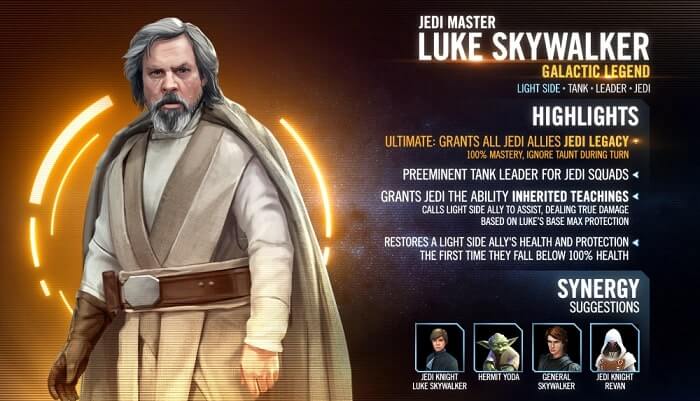 Now that we have seen the game's strongest characters let's move on to the next section to see the best teams.

One of the largest and most varied groups of characters in the whole Star Wars universe. To make a strong team, you need to have a strong leader, and with this combination, you get three options. Jedi Knight Revan, General Kenobi, and General Skywalker are three abled leaders and the strongest attackers. They are sure to guide your team towards victory. Grand Master Yoda applies boosters to allies by mimicking the opponent's buffs, and Bastila Shan rapidly grants all allies leader ability in the fight. 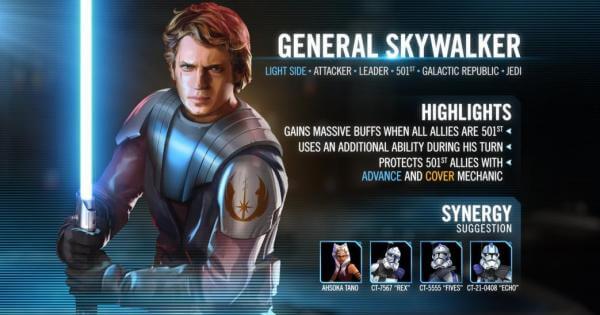 Given that most of the finest units of the Sith Team unlock at a later phase of the game, it isn't easy to build them early. But when they do unlock, Sith teams are overwhelming hitters and are a few of the strongest within the game. Sith groups depend on leads and bolster, as with their convention of ace and disciple. Head Palpatine and Darth Vader are deadly when used together. Darth Revan and Bastila Shan (Fallen) are another incredible pair of attackers. Sith trooper is another great addition to this team as an attacker. 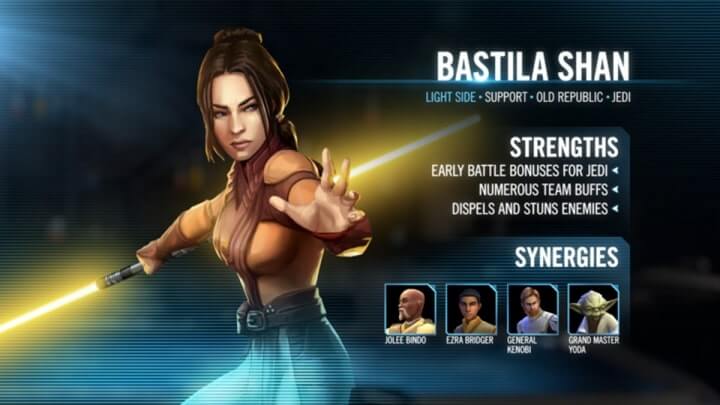 In Star Wars Galaxy of Heroes, the Insectoids/Geonosians are highly offensive. Players can put together the best team possible by combining the suggested characters. The most valuable skill of Geonosian Brood Alpha would be that it offers enhanced health and defense to other Geonosian characters in the team through its "Geonosian Swarm" skill. Aside from that, it can take the assault and defend itself with its shield. That is why they would be the perfect leader for the team. Geonosian Spy can expose and attack opponents, while Geonosian Soldier can increase the critical hit chance of his and the team members. Sun Fac lowers the enemy attacks while also taking damage.

Bounty Hunters is easily one of the best teams in Star Wars Galaxy of Heroes. They are awesome when it comes to taking down the Jedi teams. With The Mandalorian as their leader, the team is pretty much balanced with these four characters with specified roles.

The Mandalorian deals critical damage to the opponents while also buffing other members. Bossk is the member who can revive his health quickly to aid the team. Greef Karga can be used as the support character as he provides assist calls and recovery. Jango Fett and Embo will attack the enemies along with The Mandalorian. Jango Fett can de-buff enemies, and Embo can increase damage but loses in protection. 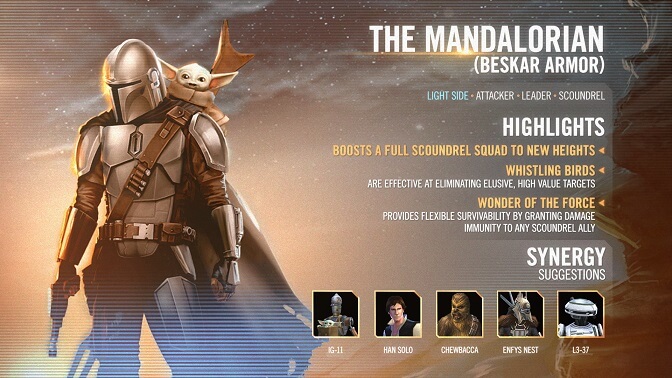 Rebels consist of many characters, making it difficult to choose and form a solid team. With the provided team, under the leadership of Luke Skywalker, the Jedi will get 50% more tenacity. Luke also gets an extra critical chance at the start of the battle. Han Solo is a good addition, providing the team with an evasion-up status effect for two turns. C3PO will provide this team's support, full of attackers seriously required. Chewbacca is one of the best attackers of the game. So, it's pretty much fine to have this character in the team.

Apart from these teams, some other teams worth mentioning are:

Some combinations of these teams are much better than the teams mentioned above. Also, remember that the list does not have any particular order. So, choose wisely and build up a strong team to progress through the game easily and efficiently. This will be all from us for now. Stay tuned with us for more updates. Star Wars™: Galaxy of Heroes Beginner's Guide for Getting Started