RPG Dice Heroes Of Whitestone is a Role-Playing game developed and published by WIMO games. It is a tabletop–inspired character fighting game. The game is available for both Android and iOS devices. You can download it for free from Play Store and App Store, though it has in-game purchases. 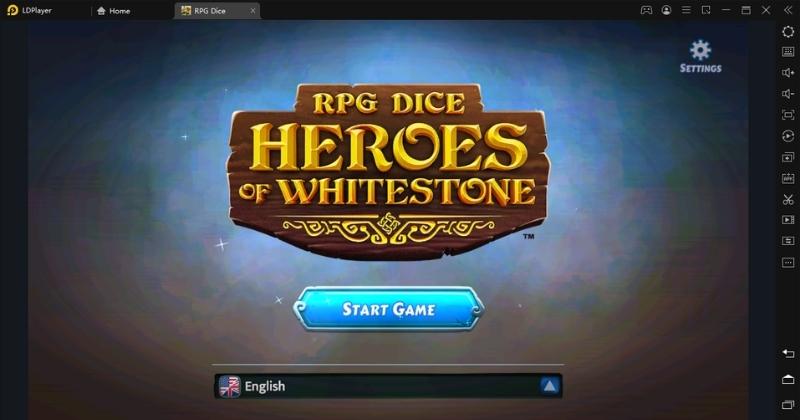 The wicked Twilight Empire has oppressed the people of Whitestone by regularly deploying its army of dark orcs, goblins, and elves to destroy this once peaceful region. Whitestone severely needs help, and everyone, whether a paid mercenary, a noble knight, a human, or an orc, must work together to defend their town.

Players must assemble a squad of five fearsome heroes to engage in turn-based battle in which the role of the dice is crucial. Each roll of the dice will determine the effect of the assault and the abilities available to employ. With over 60 characters to choose from, players may form different teams of stalwart paladins and powerful minotaurs.

Players may participate in PvP fights to put their crew to the test and advance through the rank position system to earn a variety of gifts. Warriors can also create guilds and confront raid monsters at the Ziggurat, a location teeming with the fiercest foes.

This article will go through the tier ranking of most of the strongest characters in the RPG Dice Heroes of Whitestone. We shall organize these heroes into different tiers, decreasing from the strongest to the weakest. We should also highlight that the game's heroes are divided into three factions: Warrior, Caster, and Rogue, and each has one of the six elements: fire, water, wind, light, dark, and nature.

So, let's get started with the tier list for the game's finest and worst characters without furthermore. 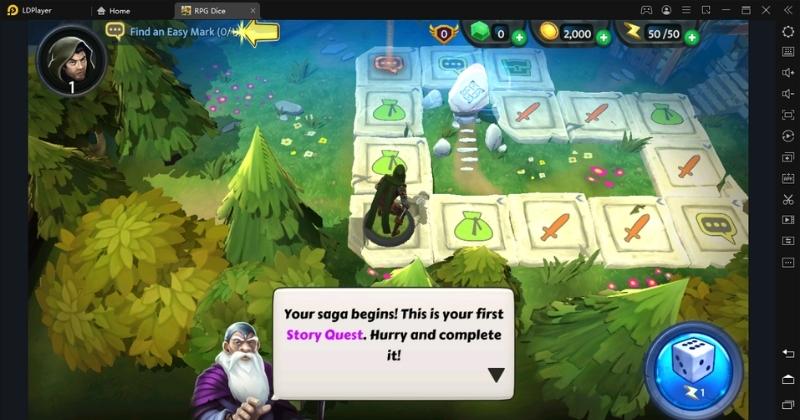 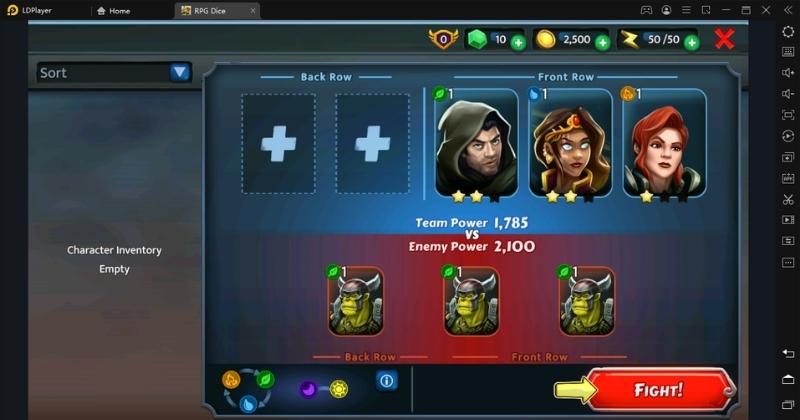 Siglind
Sigiland, as a caster, is identified as an epic hero from RPG Dice: Heroes of Whitestone tier list, and he holds a dark element from the game. This hero becomes a powerful one because of his healing abilities in the game, and there is also a Block Buff with him to debuff on all his opponents. He becomes great support for you in the game and will always be a great addition to the team. 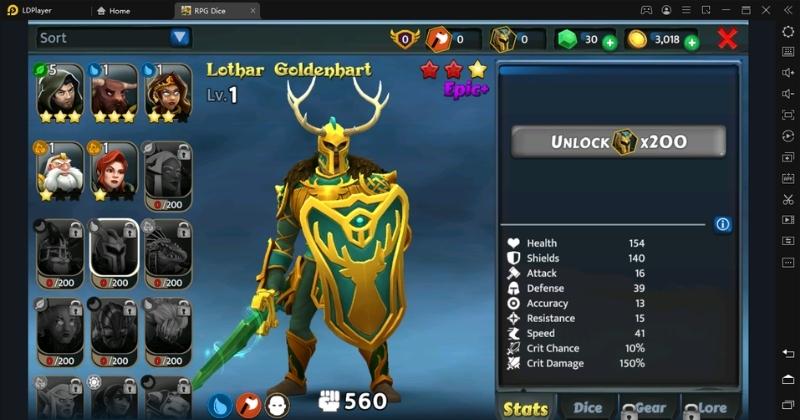 Lothar is also holding an epic rarity from RPG Dice: Heroes of Whitestone tier list, and he is a warrior. Since this hero is a warrior, the damage is the greatest power it holds, and whenever opponents reveal themselves to Lothar, he is going to give him the greatest damage. And if there is a dying victim, Lothar will come with a shield. A lesser shield will be given to the teammates of this hero, and he can also increase the damage resistance from the entire team.
Lothar is an absolutely top tier hero, and he will be identified as the most fabulous tanky unit for RPG Dice: Heroes of Whitestone tier list. 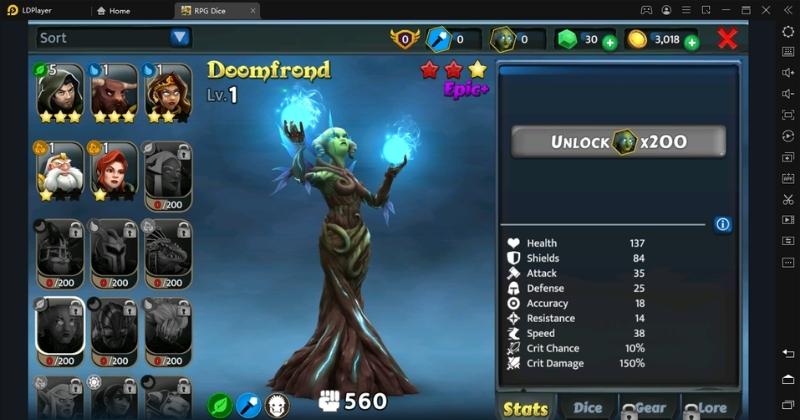 Doomfrond, as an epic unit, is a caster for RPG Dice: Heroes of Whitestone tier list and this Queen is applying a poison effect for her opponents. She can block the buffs, bomb at them and even remove buffs. She will be able to reset the CD and buff one of her team members to make the highest attack with the highest accuracy. 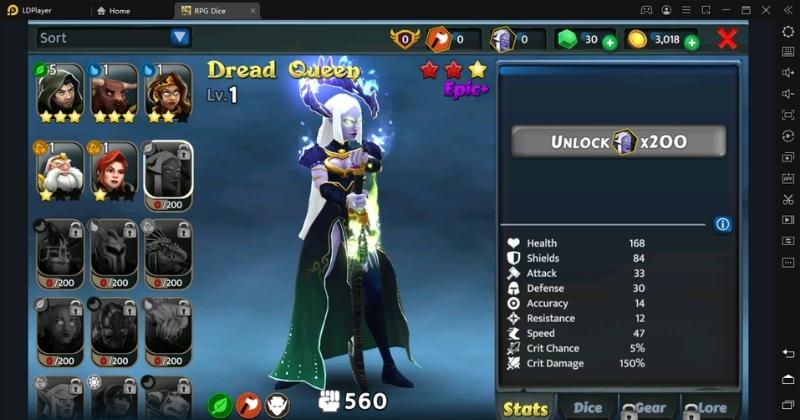 Dread Queen is also an epic hero RPG Dice: Heroes of Whitestone tier list, and she is a warrior to the game. She will deal with the defence and attack to increase those rates for her allies, and she is also doing the healing and increasing the duration of buffs. If you are searching for a great power on your boost, Dread Queen will always be your perfect hero, and she is more suitable for a team to act as a buffer. Dread Queen is obviously a great healer for your gaming in RPG Dice: Heroes of Whitestone. 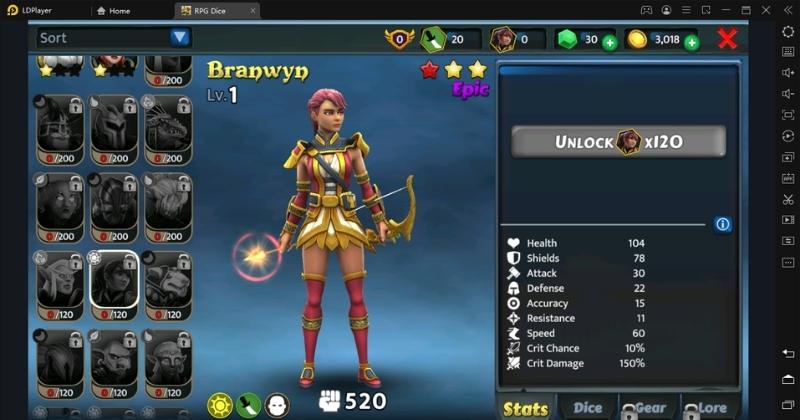 Branwyn is a Rogue character as an epic hero, and he can remove a single buff whenever there is a basic attack with a crit. When he is on the ground, Branwyn can decrease about 50% of the amount of defence on all the enemies and even will take one buff from them all. Without a doubt, Brandwyn will be the greatest hero you will encounter from the game, and he is specialized in removing the buffs.

Binda
Binda is a rare hero for RPG Dice: Heroes of Whitestone tier list, and she is a caster. She is capable of reducing the amount we have exposed on enemy buffs, and she is also increasing the boost period. Binda is capable of providing a shield on her allies, and there is a reverse effect associated with her.

Zhetlan is an epic hero from A tier, and this hero is a rogue. He is identified as the speediest hero from the game, and Zhetlan will be able to take some initiatives from the remaining enemies on the ground. Stealing is his mastery, and his speed will aid it. 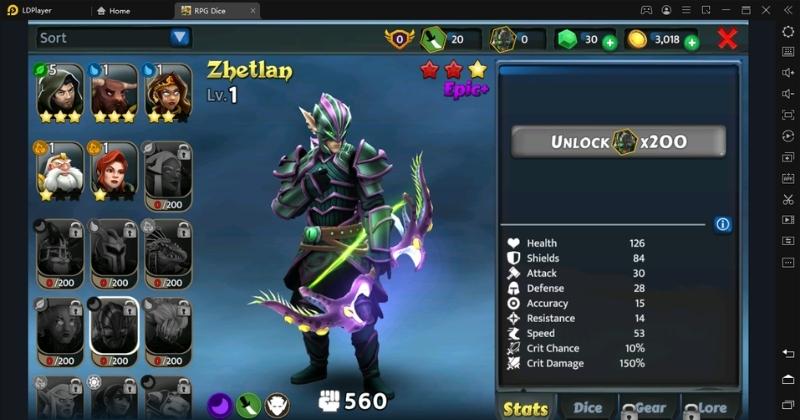 Balorn is also an epic hero as a rogue, and when he is in the ground, Balorn is going to increase the damage resistance with the critical chance from his allies. If there is an enemy who has an HP below 40% and is exposed to the Balorn, he will deal with double damage. 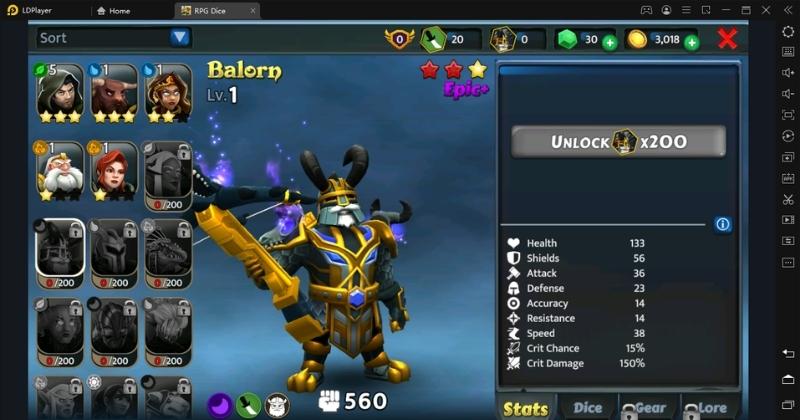 Vorrgh
Vorrgh as an epic hero is a warrior to the RPG Dice: Heroes of Whitestone tier list, and he can shield. All the teammates who are vulnerable towards the enemies are going to be shielded by Vorrgh, and if there is an exposed ally, he will increase their attack and the defence. Vorrgh can also block his enemy debuffs.

Shireker is a dark caster from epic rarity, and he can decrease the rate of healing for the enemies who have been exposed to an attack. Shrieker can increase the attack and speed for his allies. His maximum potential can be taken when he is faced with an enemy specialized in healing skills. 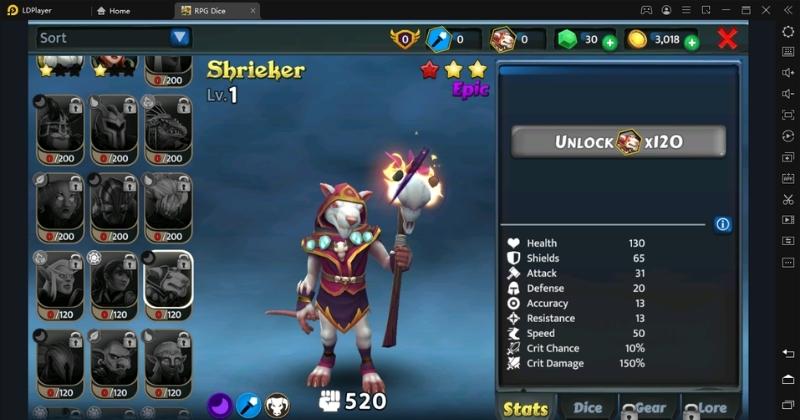 Glaivan
Glaivan is a warrior, and he becomes significant to the game because he can literally steal lives. When the enemies are exposed, he is going to apply a greater leech, and Glaivan is super powerful at this life-stealing ability. All the skills with this hero are synergized well with the game.

Rorlok
Rorlok as an epic hero will be a warrior, and he has some basic attacks which can increase the duration of the debuffs. He will take the bonuses from his exposed enemies. He is able to put a random debuff against all his targets, and enemies will always be frightened of him because of his skills. Rorlok is a great debuffer and will be fit with any team he meets.

Heroes after the RPG Dice: Heroes of Whitestone tier list A will not that impact a great deal with the gameplay, so the heroes coming after this will not be discussed thoroughly as the S and A tier lists. 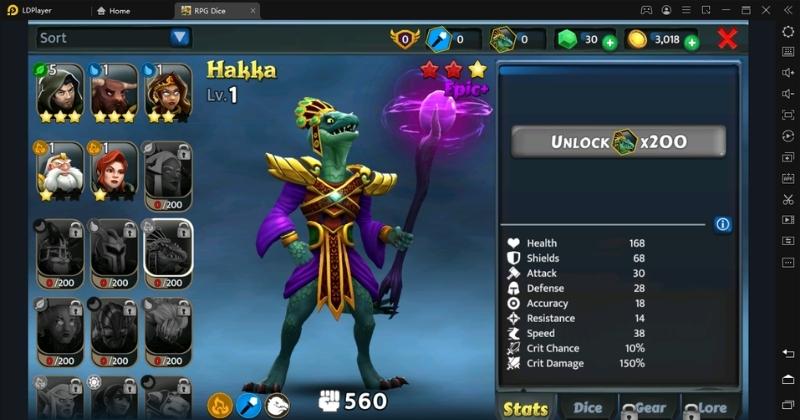 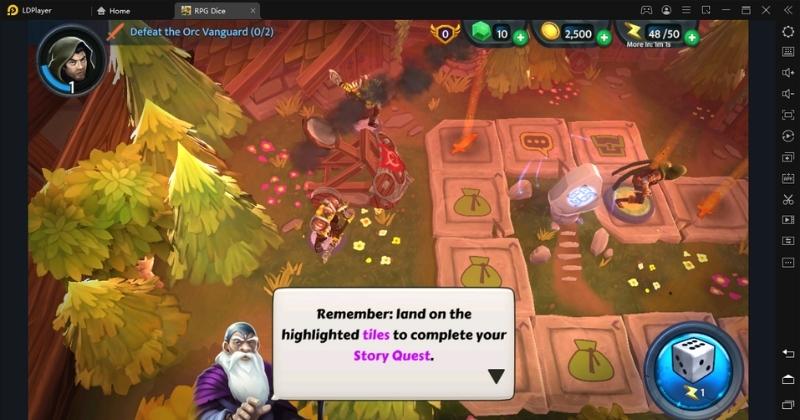 And then we come to Siglind. Siglind is a hero who will support your entire team to be alive, and his single attacks are going to debuff the accuracy as well. For your single attack purposes, try to go with Branwyn, and her attacks expose her enemies for two turns. So eventually, Branwyn will become your most versatile rogue for the game, 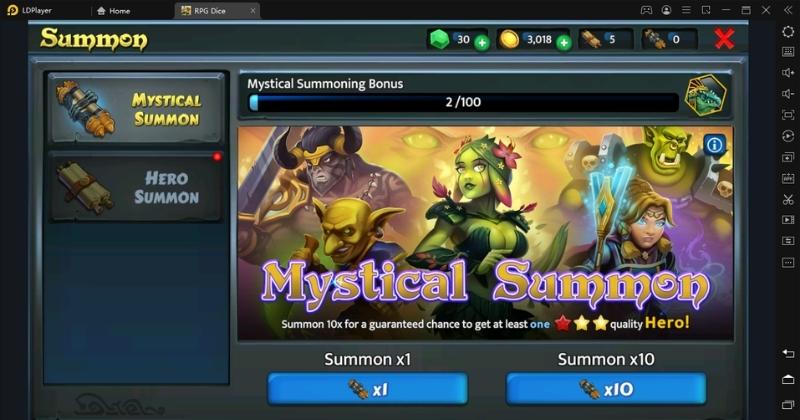 Gerriick and the Thorgrim are the best heroes survivability, and for the DPS performing and the defence warriors, try to go for the Grimroot and the Vorrgh. The reason is they are mainly aiming to stack their defence and will manage to cleanse and heal the team.

For the rerolling purposes with these heroes, step on the best android emulator: LDPlayer, as it features the quickest way for your all reroll purposes. It has this feature called the Multi-Instance Sync, and it can literally create several instances from the same game at one time. All those instances can be used for your rerolling, and this way, you are going to save your time and summon the best hero you ever wanted.

Conclusion
So, this will be the tier list for the strongest heroes of the RPG Dice Heroes of Whitestone game. Many more heroes are not strong enough to be on the list. You should focus on these heroes to progress faster into the game. Stay Tuned with us for more updates.