Mythic Heroes: Idle RPG is the latest Role-Playing Game from IGG.com. The game features various legendary characters from distinct cultures and Mythology. A player will have to use these characters and challenge the Villains. The task is to assemble a group of elite Heroes to fight and get rid of dark powers from different continents. As the game progresses, you have to upgrade your hero’s abilities with new skills and iconic weapons. The game also features PvE and PvP battles, large-scale fights, high graphics, and an expedient Character Levelling system.

The game allows you to decide if you want to involve in exploration and battle or not. You can set up your team in idle mode and let them battle and explore. If you want, then you can participate in every battle too.

Mythic Heroes feature several Heroes, so it’s best to obtain some good characters. This will help you to complete the Story missions with ease. With a powerful team, you can advance through the early levels much more quickly than other players with an underpowered team. The best way to do this is by Rerolling. It might be time-consuming, but it’s worth it.

The bottom menu of the game features all the activities. You will find several options there such as (mentioned from left to right):

The amount of all types of currencies is available to check at the top of the screen. The game features two types of Currencies.

The game has several characters, all of which are divided into different levels. We have mentioned some powerful heroes who can be used to build a powerful team. Each Character has a class such as – Fighters, Magicians, Supports, and Tanks. 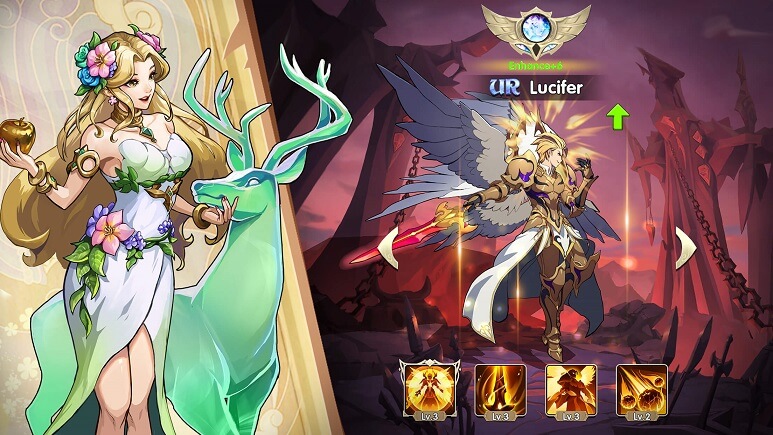 These are some of the best characters. But in the beginning, you will have to start with some weak characters. So, upgrade them and replace them when you unlock a better character.

Apart from these, Mythic Heroes also features different Quests such as – Folk Tales, Heroic deeds, Legends of the Gods. These are with basic, medium, and highest difficulty, respectively. Each quest rewards you after completion.

This will be all for now. We will be sure to update you with more information soon. We recommend you give this game a try. If you have a tight schedule, you can go with idle mode.