Taking the fights into a war where the Marvel characters are against each other, the Marvel strike force is one of the games that need to have a proper combination to win. When it comes to the combinations, each character's ability is unique from one another.

Therefore you have to select the best combination as the team and play the game for a win. Although it is the f2p or midgame, the best combination stays steady for better gameplay against all other competitors. If you are a person who enjoys free-to-play to the mid-game, these 10 combinations will take you to the win for sure.

Rerolling these heroes for your best teams can be easily done with LDPlayer because it has got an amazing feature to perform several rerolls at once. This android emulator has a feature as multi-instance sync feature , and it let players copy their same game into different players. So you are going to perform reroll at the same time at several places. So earning your powerful hero is not a dream anymore.

You have to only go through the following things to make a reroll.

• Copy your emulator based on your hard disk space

• And you are now free to reroll and earn the following teams.

With the use of the synchronizer of LDPlayer, players are getting chances to control multiple accounts simultaneously. So you are going to experience the fastest rerolling and a controlling interface with you to earn the best from your gameplay with Marvel Strike Force.

These are the badasses. Considered the highest balancing team in the Marvel strike force, Black Order is the team with the ability to defeat any kind of character combination. Ebony Maw, cull Obsidian, Thanos, Proxima, Corvus and Midnight Glaive will make the team. The team has been able to win War offense, Ward Defense, and Arena offense modes, and even the raids are under their throne. 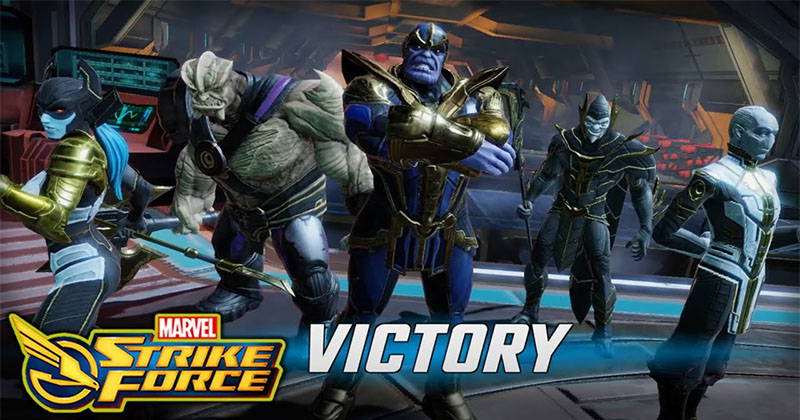 Ebony was and Thanos are creating the best combos you will ever see in this game. They are capable of creating the maximum damage to any sort of opponent in less than a couple of seconds. Being one of the crucial characters in the game, Ebony Maw can perform a percentage of counting damage to the opponents.

When it comes to the section of the characters, Thanos is a better raider, Corvus Glaive being the best striker and the rest have got mixed commitments towards the gameplay. Also, it is vital to note that Ebony Maw has got the best healing characteristic as well.

The more typical the more the win predictability is higher. Black Widow, Captain America, thor, hawkeye, hulk and black widow are available on this team. Thor is available in his best version and the players will get the most embracing features of Thor including combats, defense, and attacks. When it comes to other characters Captain America, Black Widow, and Hulk, they will create the best war against the opponents. A battle against these teams is an impossibility because there are not only powers but several war combos for this team. 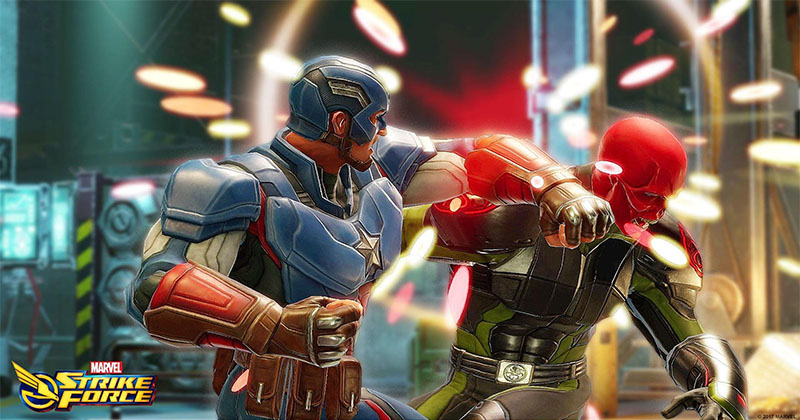 Even if it is a F2P early or any stage until the Midgame, they will do an amazing duty in the battles. It is important to note that the combination of the members is more useful for raids than any other team. When it comes to the ISO 8 confidence level of the players, they have been believing Hulk more than anyone in the team. He has got a higher healing ability than others. When it comes to Skirmisher, Hawkeye has got the dominant class for that. Captain America has got Raider Dominance throughout the game as well.

As one of the most impressive sets of players for the Marvel strike force, brotherhood is filled with impressive Mutants who have got incredible powers. If the gamers are looking for an offense team, this will be where the gamers can get full use. One of the most important factors regarding the brotherhood is their ability to expand the dominance against Symbiotes. If it is a war against them, the winner will be a possible thing. 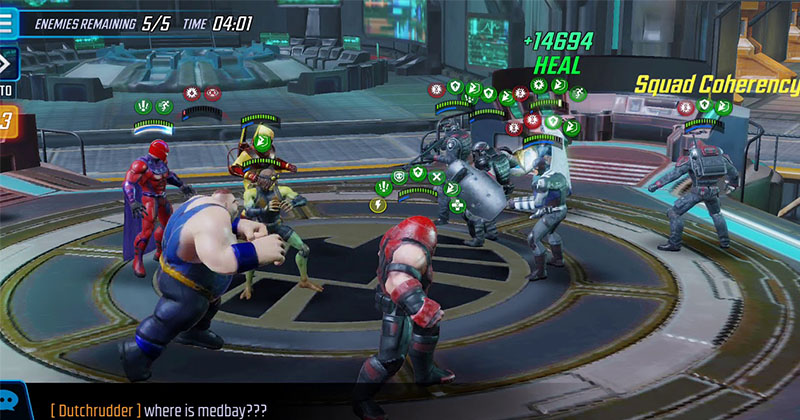 Toad, Blob, Magneto, Juggernaut, and Pyro will be able to take the player into the winning. Since they have got the best refreshing powers after an attack, the attacks can be launched one after another as well. When it comes to the defense, every member is having a shield that can cover up the team pretty smoothly. Also, the mutants in the team are capable of unlocking the legendary characters which means the gamers can expand the expedition to new levels.

If you are looking for a team who has got the dominance War, X Force will have to be that for sure. Also, the players will not meet these characters in other modes such as Arena, Raids, and the Dark Dimensions as well. Domino, Cable, Deadpool, x-23, and Negasonic make the team. 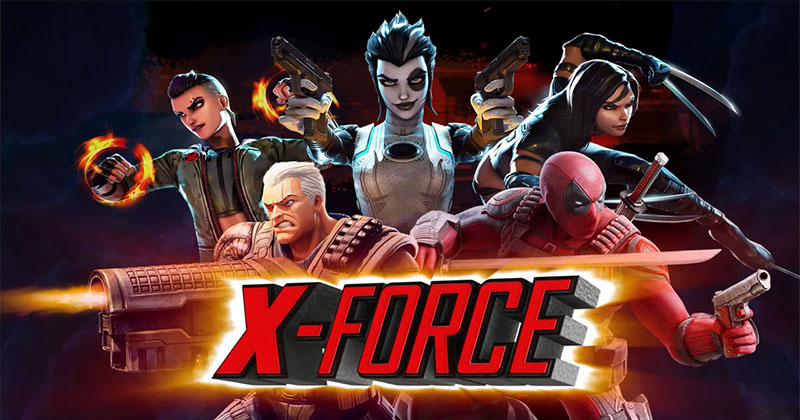 Reminding the basic nature of the Mutants, the gamers will get the characters suit for the war dominance. Once they are in charge, they will always be in charge. Their ability to attack the other teams is always going t be a single party winning.

They can take on Asgardians, Emaraulders, Marauders, and technically all of the weak teams from the f2p early to mid-game. Even if it is black order, they will have the ability to that as well. Also, this will not be the team for the versatile purpose which means only one character has got the suiting personality for that. X-23 is capable of

When it comes to the raider class, Deadpool and Negasonic have been the choice for several players. X-23 and Cable have got the attention of strikers as well.

Being one of the toughest, hard-to-beat, and defensive campaigners in the Marvel strike force, Asgardians have got the attention of the gamers. Although there are characters such as Thor, Heimdall, Sif, and Loki, Hella has been the dominant character for this game. Even if there are some dominant characters for Thor and Heimdall as the strikers, hella has got the vote of the majority. 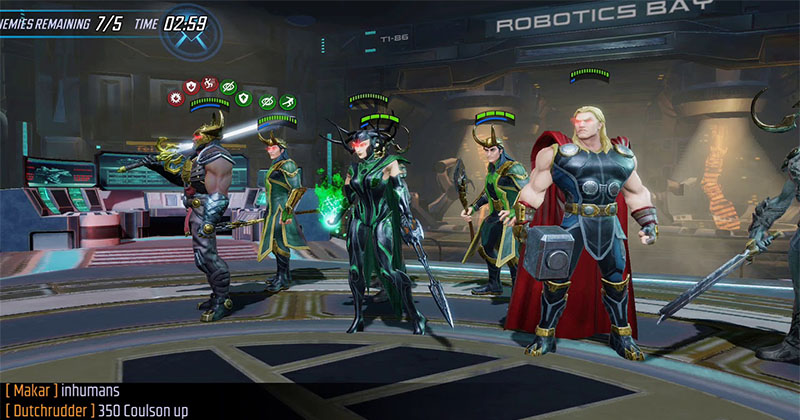 Hella can spread knives all around the place and make enemies fall on their knees. Either hella or Loki can unlock the Phoenix which makes those characters are crucial to be used. Loki is going to provide a great opening combo for the game and the rest will keep the momentum going all the way to the winning line. He can do mind control, and some vital blows as well.

Thor has got the striking power to fall down the opponents in a short time. Being the second legendary character, Black Bolt is the main key to Ebony Road.

Filled with Mutants, X men have been the characters filled with destructive dominance. Made with Colossus, Beast, Storm, Phoenix, and Cyclops, X men can perform quick but fatal damage to any kind of opponent at any stage. Even if the gamer is av, the team will suit for sure.

Phoenix and the Cyclops have got the dominance throughout the game with their defending and attacking skill being the same. Not having Wolverine to the best combination makes no sense as he doesn't have the attacking skills. Colossal and the Beast have got combo skills that can be used against any kind of hard situation. They have the ability to unlock Magneto. Since they all are mutants that will be a possible thing for anyone in the team. 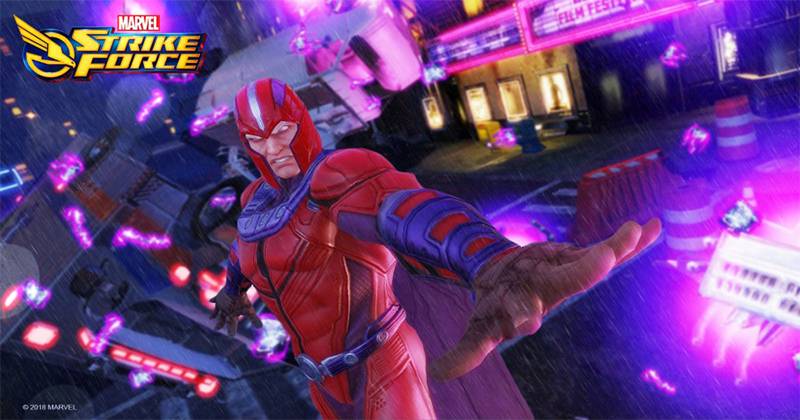 If you are looking for a team for the Dark Dimension, Phoenix will be the key to get over it. Since she has got the power to do the damage in a percent manner. Even if it is about the least damage she can cause, that will be in as a percentage. Colossal will be the protector for Phoenix as she has got the main responsibility for the team. In the team, Cyclops will be the best raider, and the Beast will be the healer as well.

To have the best team, it is not only enough to have the best combination of characters but to identify the possible combos they can perform during the gameplay as well. So take your decisions in the right way and earn these teams to become a success in the early game.