konoSuba Fantastic Days are finally onto the globe. This is the newest RPG that came to our fascinating RPG world with summoned characters and traveled in here to face challenges and exploration. Nexon has a masterpiece as an RPG in here and tries to fulfill the long journey on KonoSuba Fantastic Days with laughter, joy, and challenges. 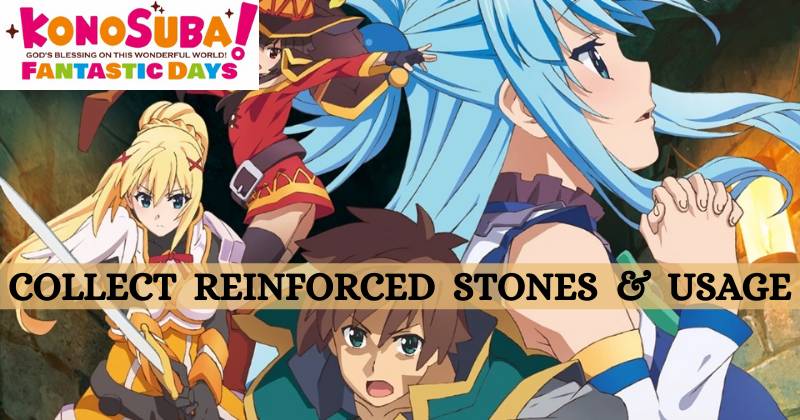 So today, let’s talk about the Reinforced Stones. These are the consumable items that you can use to enhance your equipment in the gameplay, and they are the special items. Rather than using money, these strengthening stones can be used for your equipment strengthening, and they come in several rarities. So how can you collect them efficiently as a player, and what makes their use? This is the guide for you.

What are Reinforced Stones?

As we said earlier, these are the consumable things that you can use as in-game money to enhance your equipment. They are again called strengthening stones in the game, and these items are the essential items for strengthening up our equipment. You will see them with several rarities and the needed equipment methods.

Every player has the chance to get these reinforced stones from every quest they meet. And they come within the events as well. But depending on the current situation you are in and the game is the number you will take. It means that the number of reinforced items you can take will be smaller than the required number based on the time and the situation.

How to Collect Reinforced Stones Efficiently?

It comes from several methods, and the methods for small, copper, large, Gold, medium, silver, rainbow, and extra-large ones have several methods of obtaining.

When you collect reinforcement stones from the main quest lap, you have to use that method as your best. There will be so many drops you will see at the main quest everywhere, and it will be so good to collect them all while you are collecting weapons and accessories.

Sometimes small and copper appear at the event exchange as well. When there is a recent event, you will see them on the lineup exchanges, and this exchange rate will not be so good. But if you have exchanged highest priority items like goddess medals or the skill potions, it is way better to exchange them all.

You can take these from the main quest, events, quests, and arena medal exchange like small and copper ones. These are not strong like the small reinforcement stones, but this material requires a player for a specific amount in the game. The dropping rate on these stones is generally low from the number of requests, and this can be identified as a short supply for the early stage in the game.

When you collect medium and silver from the main quest lap, they will have a lower drop rate than the small ones and will have an equal probability from the rare frame or the scroll of the quest. When these appear at the event exchange, they are often included within a lineup on the event exchanges. The exchange rate here is not seems to be so good for players. Generally, you will have to prioritize the other materials and replace the reinforced stones. You can do it if you be really capable of affording it.

There are many requests for this kind of reinforcement stones, and the normal laps for them will not be sufficient. So always keep in your mind to use efficient rather than an efficient collection. It is always better to decide how to use them, like if you use them to strengthen material on final equipment that can be used forever. Or players can decide to use them for two stars or fewer weapons.

These can be obtained from the hard quests, events, quests, and arena medal exchanges. Large and Gold are the materials that the players are using for the upper part of reinforcement, and the number of requests here will be fewer than the small and medium ones. But this is known to be a strengthening stone that is so hard to collect than the previously mentioned ones because they are not dropping on the normal quests.

Within the early stages, you can strengthen until you are using the strengthening stones large. So you don’t have to worried about it much, but when it is the stage where you are training the 3-star equipment and the 4-star equipment to the maximum strength, it will run out with a fast speed.

Daily hard quests are significant here. Reinforcement stones are going to be dropped within the main quest and hard event quests. But remember that hard will have a limited number of challenges per day, and players have to play these hard quests every day.

And another important thing is the event bosses. Event bosses are actually a great source in here. Reinforcement stones of large will drop at event bosses, and this dropping rate is low compared to the hard. Depending on the difficulty levels, there you may see several drops at once. So you can keep up hope.

Here you will need a challenge ticket. But not like hard, there will be no limitation to the number of challenges in a day. And for that same reason, these are becoming a valuable source of supply.

Do your best on character trainings. Try it from here.

These are appearing at a part-time job or within a quest for a limited time. Extra-large reinforced stone is a material where you can only take from the Goddess Medal exchange, but they are available for a limited time within the quests. There is no specified information telling which quest is dropping these stones, but it is better to go around with many quests until they are stopping from falling.

You also have to know that Reinforced stones of extra-large are available at the Goddess Medal exchange. In there, the general flow goes within obtaining goddess equipment and strengthen with the reinforcement stones. When it is time for an exchange, you should always know what the enhancement stones on the game are. You can use these stones for several purposes as follows.

Using for three or more weapons

There usually are two types of equipment here as accessories and weapons. As a player, it is not good to use these stones to strengthen your accessories, although you have the chance. Proper equipment changes are always depending on the quest you are challenging. The ideal weapon is somewhat dependent on the character, so you always recommend using the strengthening stone only when you have three or more three weapons.

In the places where weapons are strengthening their all attributes, the characters which can be used as the best weapons sometimes go narrowed down inevitably. On the other hand, if there is a weapon with high characteristics of versatility like magic attack power-up or physical attack power-up that an arena weapon has, it will always be recommended because they can be reused with several characters.

We are especially recommending the players with wands, swords, and daggers in here. The swords and the wands are the most using weapon types for most characters, and if you strengthen up a one, you gain the opportunity to use with several characters. So it will always be recommended.

Are you looking for a good and assured way of rerolling? There is a way to have a quick with guaranteed heroes. Try our Reroll Guide. So here are the efficient ways of collecting the reinforcement stones and their respective usages. Understand that they all have a specialty on them to provide some benefits to the player, and they are so much valuable for strengthening the players’ equipment. Each type of reinforcement item offers a unique advantage to the players with several aspects and tries to earn them by following these mentioned methods. You will totally be satisfied with your results.